The Foreign Office head who is paid £185,000 a year of taxpayers’ money

The Foreign Office head who is paid £185,000 a year of taxpayers’ money and will enjoy a gold-plated pension but stayed on holiday for 11 days while Kabul fell in biggest foreign policy crisis since Suez

The Foreign Office’s top mandarin, who will enjoy a gold-plated pension, today admitted there are ‘lessons to be learned’ from the Afghanistan debacle.

He enjoyed a holiday abroad in August and left deputies to deal with the biggest foreign policy crisis since Suez in 1956.

Sir Philip, 58, who took on the role as Permanent Under-Secretary for Foreign, Commonwealth & Development Affairs in September 2020, is in line for a £1.7million pension pot.

The British diplomat, born on August 18, 1963, studied economics and politics at Warwick University before receiving his masters in economics at the London School of Economics.

Sir Philip Barton (pictured), who will enjoy a gold-plated pension, today admitted there are ‘lessons to be learned’ from the Afghanistan debacle

The married father-of-two got his first job in the Foreign and Commonwealth Office in 1986, when he was stationed in Caracas, New Delhi, and went on to be showered with awards: including the Officer of the Order of the British Empire (OBE) in the 1997 Birthday Honours list; and Companion of the Order of St Michael and St George (CMG) in the 2007 Birthdays Honours.

In 2020 he was made Knight Commander of the Order of St Michael and St George (KCMG) for his services to British foreign policy.

Sir Philip married his wife Amanda after the pair met in the 1990s while he was posted in India. He once said: ‘I met my wife, Amanda, when we both lived and worked here and we named our daughter “India” – not knowing I would return one day as High Commissioner.’

During an extraordinary committee hearing, Sir Philip revealed that he was on leave from August 9 and did not return until August 26, nearly two weeks after the Afghan government collapsed and handed the Taliban control.

He refused to say where he was on holiday, but disclosed that it was partly in the UK and partly abroad – trying to play down the impact on the crisis response by saying he had put cover in place. He refused to confirm whether or not he was still in the UK when the evacuation began. 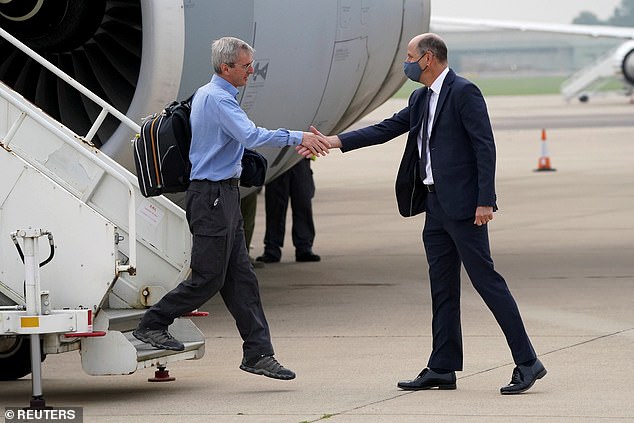 Sir Philip greets British Ambassador to Afghanistan Sir Laurie Bristow as he arrives at RAF Brize Norton base after being evacuated from Kabul, in Oxfordshire, August 29

Sir Philip insisted that at the time he left there was ‘no inevitability’ about the situation spiralling out of control in the way it did, but added: ‘If I had my time again I would have come back from my leave earlier.’

Astonished and furious MPs accused him of ‘platitudes’, questioning when he had booked the leave – and why he was allowed to be off at the same time as then-foreign secretary Dominic Raab. Also off at the same time were the national security adviser Sir Stephen Lovegrove, plus David Williams and Matthew Rycroft, the heads of the Ministry of Defence and Home Office respectively.

The mandarin said the evacuation from Kabul following the collapse of the government was ‘one of the most complex and challenging crises we’ve had to face’.

But he conceded there were ways it could have been handled better and he ‘wished’ the operation had been able to get more vulnerable people out.

In 2020 Sir Philip became the shortest serving High Commissioner to India when he took up his current position just nine months after accepting the role.