Everyone knows the story of Liverpool’s stunning 2005 Champions League success which included one of Europe’s greatest ever comebacks against AC Milan in the final.

Inspired by skipper Steven Gerrard they came from 3-0 down at half-time to earn a 3-3 draw before the night’s other main hero goalkeeper Jerzy Dudek performed heroics in the shootout to help Rafa Benitez’s side claim a fifth Champions League title.

But it was not just the miracle of Istanbul, on this day 15 years ago, which produced heroes for Liverpool, as Sportsmail looks back on the unsung heroes who also played key roles throughout the European campaign.

It says much about Djimi Traore’s seven-year Liverpool career that he is best remembered for scoring one of the greatest own goals in recent times following a superb back heel drag back in an FA Cup defeat by Burnley in 2005.

But despite his shortcomings Benitez saw him fit to play a key role when it really mattered. He featured in all but one of Liverpool’s Champions League knockout games in 2005 which included clean sheets home and away against Chelsea in the semi-final as well as at Juventus a round earlier.

And while many were laughing at him following his Turf Moor calamities it was he and Liverpool supporters laughing last and loudest as he proudly showed off his winners’ medal following 120 minutes of action in Istanbul.

Yes, he conceded the free-kick that Paolo Maldini scored from in the first minute of the game. But he also made a crucial goal-line clearance later on in the match. 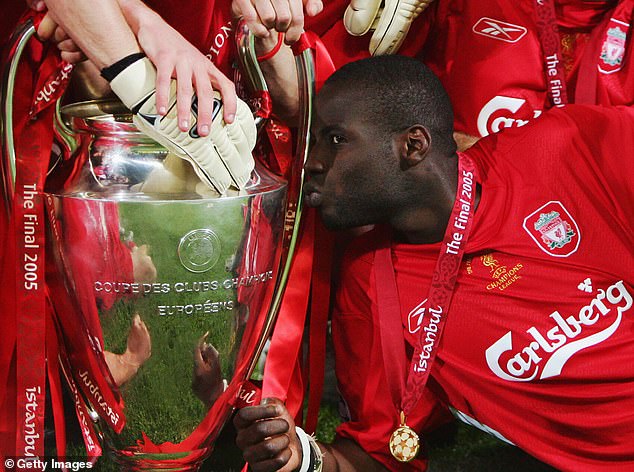 When Liverpool paid Dinamo Zagreb £5.5million for the midfielder in 2000, it was seen as a massive coup having seen off interest from the likes of Juventus, Barcelona and AC Milan.

Promises of him becoming an integral part of the Reds midfield never quite materialised and following the Champions League final where he didn’t start, he made a low key departure to Panathinaikos.

But he was probably the unluckiest member of the Liverpool players not to get on the pitch that night. Biscan had been a constant throughout the knockout stages in what was by far his best season at the club only to be dropped for Harry Kewell in the final.

Kewell went off injured after 23 minutes but with Liverpool already 1-0 down by that point, the more attack minded Vladimir Smicer was thrown on instead. Tough break. 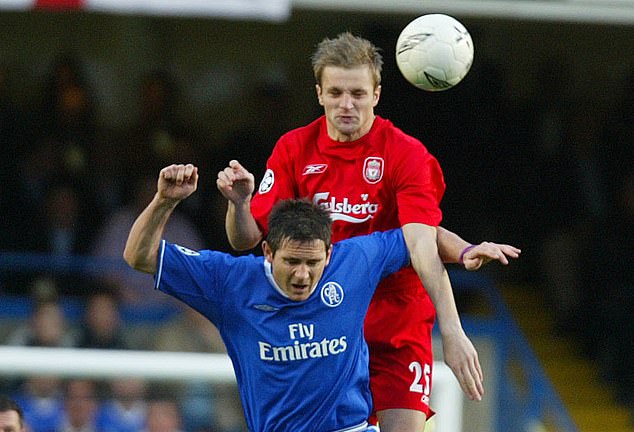 Nunez was transferred to Liverpool in 2004 as part of the deal that took the more high profile Michael Owen to Real Madrid.

Both would struggle for first-team action in their sole seasons at their respective clubs but only one would get to win Champions League.

He was less effective in his other appearances, including from the start in the 0-0 draw at Juventus and another three cameo showings from off the bench in the knock-out stages – none of which were in the final. 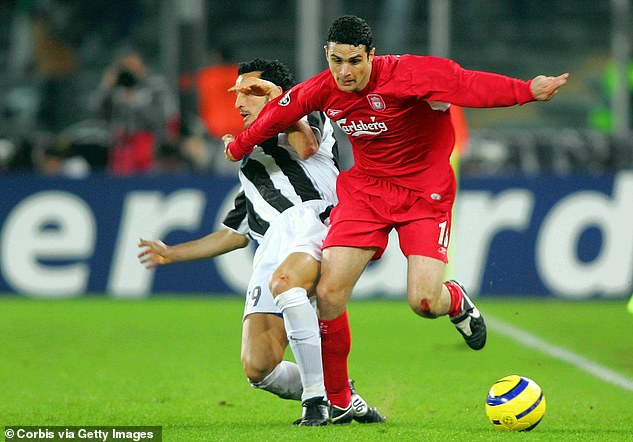 Antonio Nunez featured sparingly in Liverpool’s run to the final, but did play at Juventus

Signed from Leeds for just £750,000, Carson was only brought in five months before the Istanbul triumph to provide competition for Dudek.

It proved to be a sound piece of judgement from Benitez who was then forced to call upon his new keeper for the first leg of the quarter-final against Juventus at Anfield.

At just 19 years old he was playing just his third game for the club and he made a stunning stop on the night to deny Alessandro del Piero from close range.

He was slightly at fault for the Juve goal in the 2-1 victory for Liverpool by allowing a Fabio Cannavaro header to squeeze through him. But his performance was enough to eventually see the Reds through in the tie in his only appearance in the competition that season. 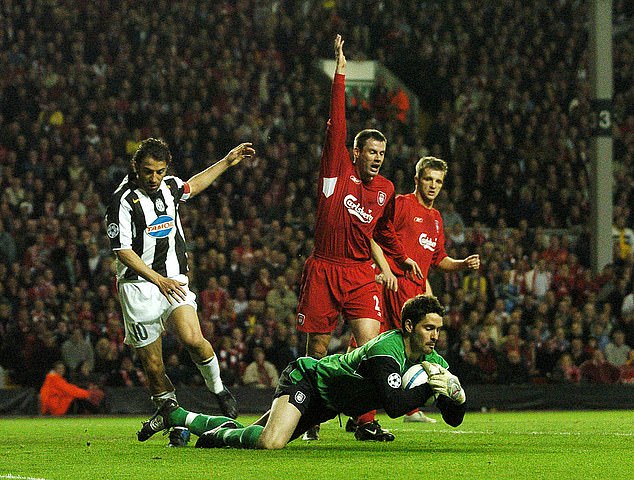 Another unlikely star from the home clash with Juventus. Le Tallec’s only Champions League start was at Anfield in the quarter-final and he did find an assist in the 2-1 victory.

However he only appeared three times overall throughout the entire run, with 16 minutes coming against Bayer Leverkusen, and four minutes in the return leg at Juve.

After seven years at Anfield where he started his senior career and played just 32 times, he left for Le Mans in 2008. 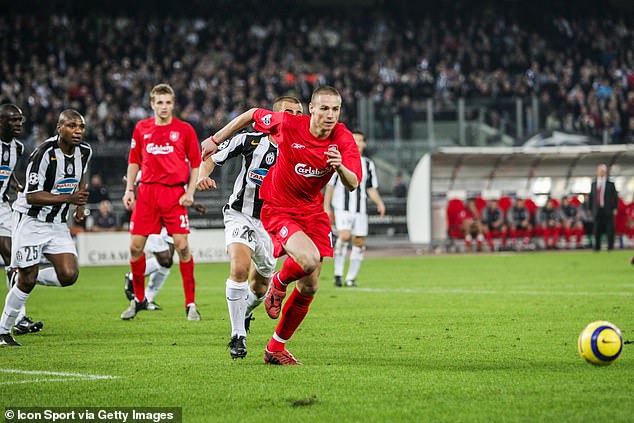 Sinama Pongolle was a distant cousin of Le Tallec but his arrival at Liverpool wasn’t down to just keeping a relative company.

He arrived at Anfield in 2001 as one of Europe’s most promising young strikers after tearing apart the Under 17 World Cup with France.

Merseyside never quite got to see that potential fully bloom but he had his moment under the lights at Anfield.

It was he who grabbed the key equaliser against Olympiacos at Anfield that paved the way for the stunning late turnaround that would seal a late spot in the last 16.

He failed to appear in Europe again for the rest of the season and following an unsuccessful loan spell at Blackburn Rovers a year later he was offloaded to Spain.

LIVERPOOL’S RUN TO THE FINAL 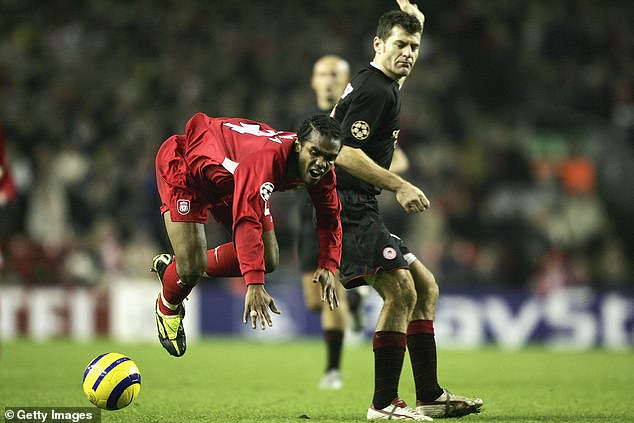 After coming through the Liverpool youth system, Mellor never quite made the grade at Anfield before leaving after four senior years in 2006.

Yet for a player who hardly featured during his time on Merseyside he has some memorable moments to cherish. The first was a stunning last gasp 25-yard winner against Arsenal, but more was to come.

Gerrard’s late wonder goal means his name will forever be associated with the 3-1 win over Olympiacos, but it was Mellor who had the most impact.

Within two minutes of coming off the bench in the 88th minute, he nabbed in with a poacher’s effort to give Liverpool the lead before it was he that cushioned the ball down for Gerrard to blast the Reds into the last 16.

Sadly, injury meant those 12 minutes were all he would play in the competition that season, but Reds fans will never forget them. 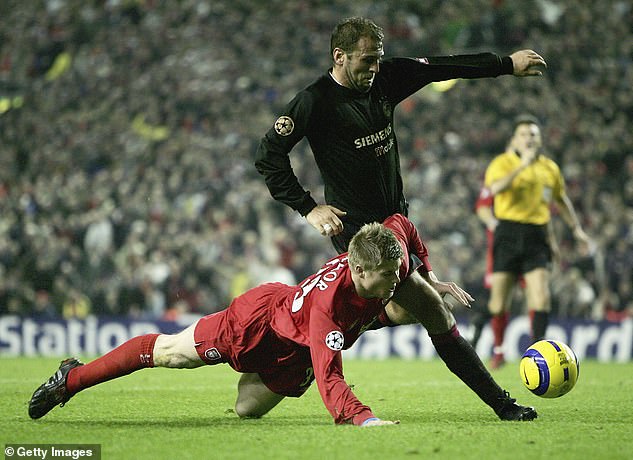