The golden city that rises from the dust: Explore the rich desert history of Jaisalmer

Too far by road from Rajasthan’s honeypot destinations of Jaipur, Jodhpur and Udaipur, the Golden City is only 131 miles from the closed border with Pakistan and surrounded by the sandy wasteland of the Thar desert.

I, too, missed it during my tour of India’s most regal state, some 40 years ago.

Golden wonder: Jaisalmer’s fort and old town is a far cry from the busy streets of Jaipur, where Ivo flew from

So on this occasion, after a week in the smog-filled, rickshaw-choked streets of the state capital, Jaipur, I decided on a pilgrimage to this last well outpost of the long abandoned southern caravanserai of the old Silk Road. It was worth it.

My trip began by shirking the six hours of desert driving and flying direct from Jaipur to Jaisalmer’s spanking new airport, which is shared with the MiG-29s of the Indian air force. I was picked up in a slick 4×4 and driven 45 minutes to Sujan The Serai, a ten-year old desert camp which makes glamping look like slumming it. Even before arriving, the urban detox began.

The desert air was sharp and clear, the airport road a single farmer’s track, as was the last leg to our tented residence off the new and near-empty trunk road then on to pillowy, slippery sand. 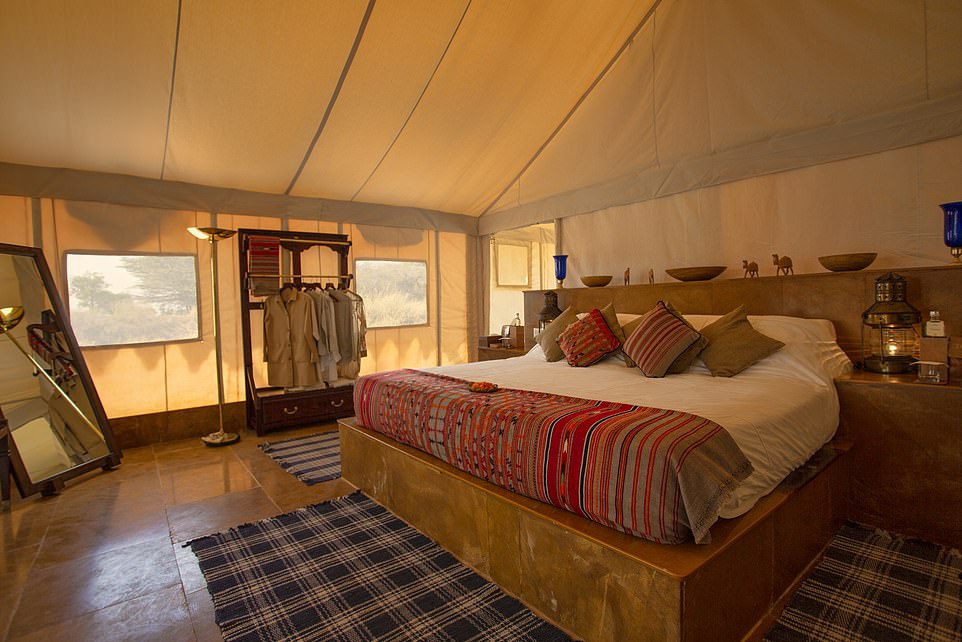 The Serai’s magic formula is simple — supreme comfort and service deep inside the desert.

It must be the only hotel I have stayed in that’s sole, brick-built structure was the swimming pool. The reception area, the dining room, the bar and sitting room, and, of course, all the ‘rooms’ are fashioned from tent poles and canvas.

Mine had its own sitting area, terrace, huge bedroom and almost bigger bathroom. Grander and better-heeled guests could enjoy their own plunge pools, spas and walled gardens or groups of tents, creating their own stockaded seclusion; inside, no television, but outside constant entertainment from the surrounding fauna and the flocks of birds that shared our oasis.

So what to do? I chose at first not to visit the city but to ‘chill’ — and what an appropriate word that is. For after mid-20s celsius January days, the desert thermometer crashes to near zero. At night, one returns to one’s tent delighted by the simple pleasures of electric heating and three warm water bottles elegantly stashed in the Emperor-sized bed. More a sanctuary than a resort and, although the food and drink is well-chosen, one should bring one’s own entertainment. 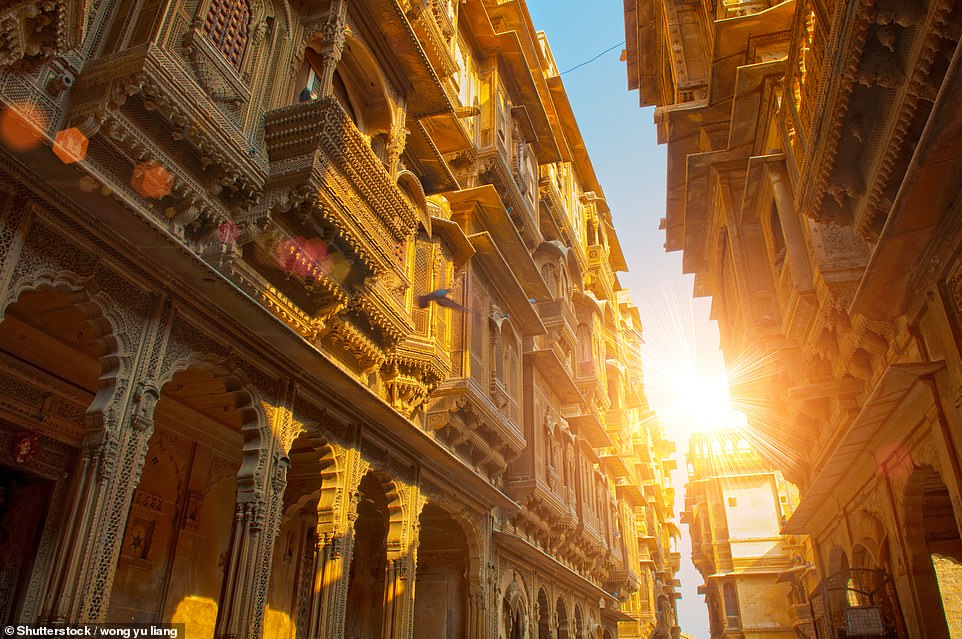 The architecture in Jaisalmer is intricate and mesmerising, as this images shows 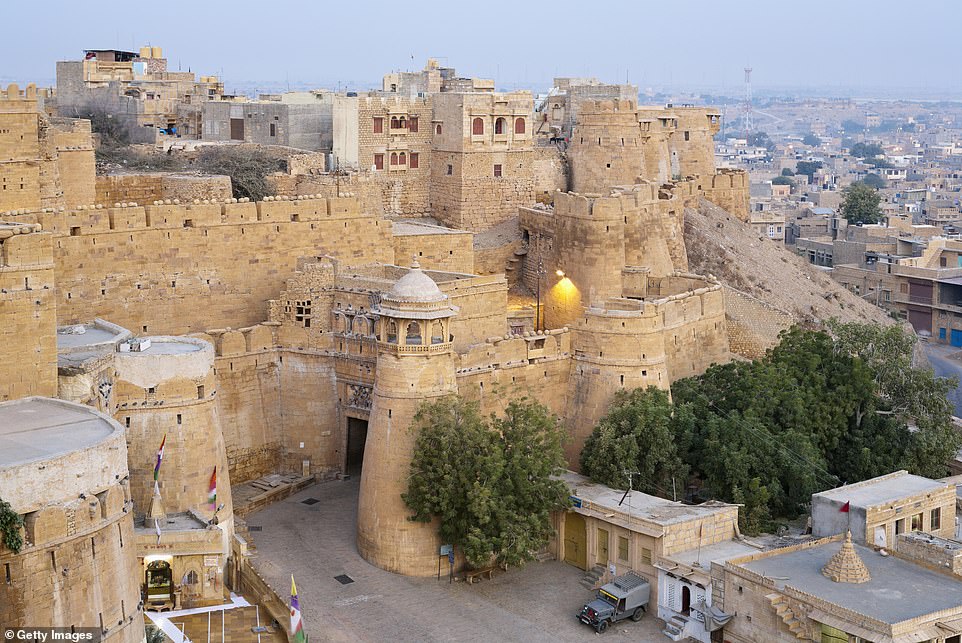 The joy of Jaisalmer: The Fort has 30-metre-tall walls, which overlook the rest of the city

My sole expedition was a journey into the real, non-touristic Rajasthan of tiny hamlets, huge, inquisitive antelope and grumpy camels — touristified only at the end of the day with a sundowner on the dunes.

For me, the joy of Jaisalmer was not just its desert, but the Fort itself — an Indian version of the ancient fort of Masada in Israel — which perches above 30 metre-tall walls at the top of a rocky outcrop and overlooks the rest of the city.

My charming Brahmin guide was Mr Vya, whose family had lived there since its golden age in the late 15th century.

We toured the ancient Jain temple with its 6,666 idols bearing charming signage: ‘Please do not touch The God’; visited the Maharajah’s intimate, almost liveable palace; walked the 700-year-old city walls and perused the still bargain-filled souks.

It is the only Indian town I have visited that can still claim those increasingly rare qualities — authentic and laid-back. Making our farewells at a rooftop chai shop, Mr Vya pointed to the new city sprouting beneath the fort’s walls. 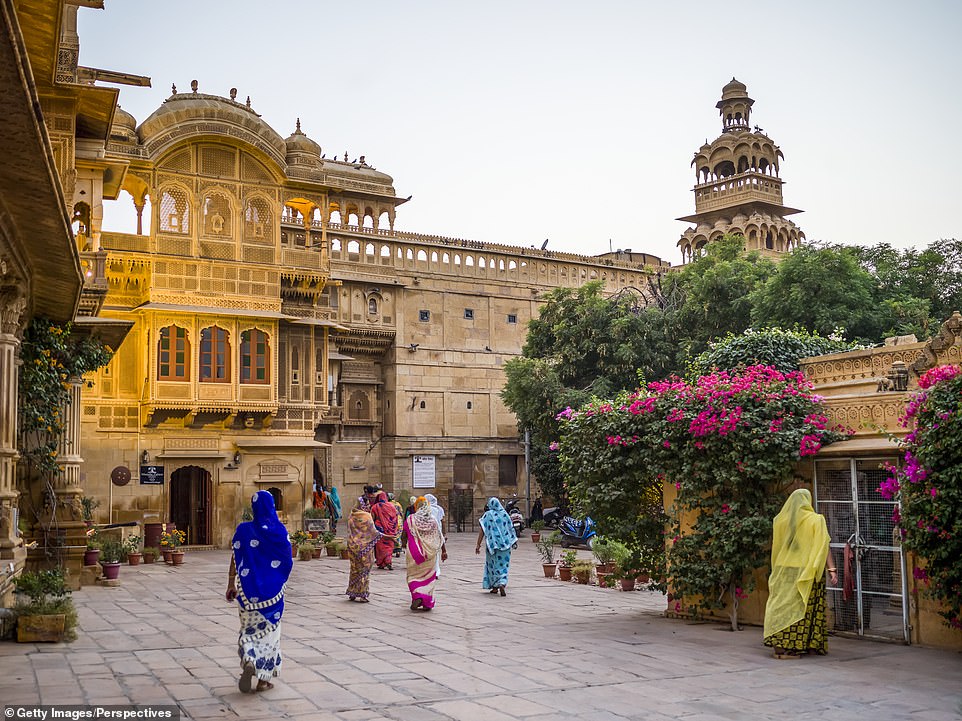 Authentic: The streets of the old-town are quiet and laid-back – but for how much longer? 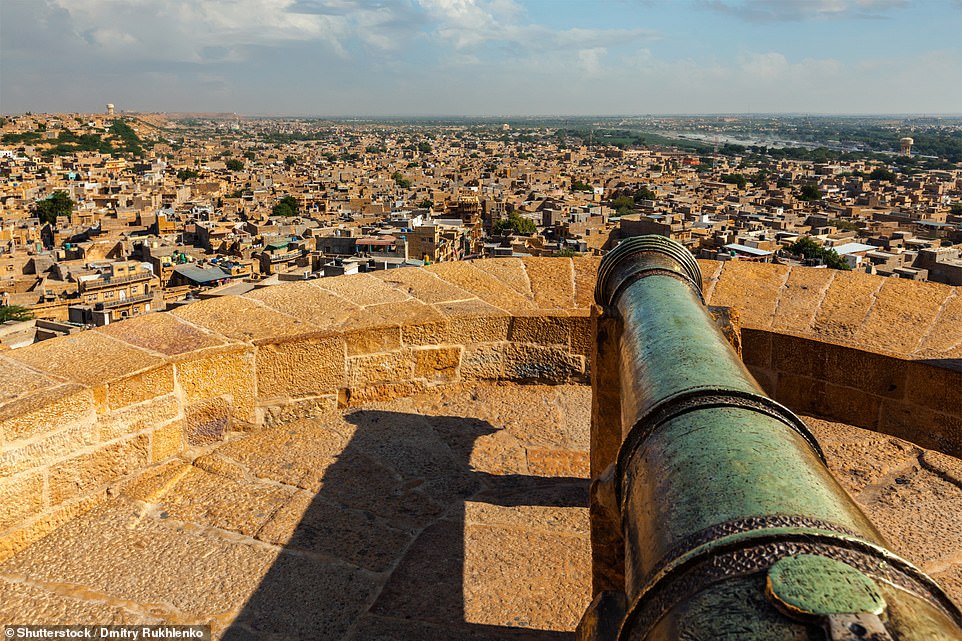 A view of Jaisalmer from the fort. Twenty years ago, Jaisalmer only had 200 residents, now it has 89,000

He was proud that it had pragmatically accommodated both the Mughals and the British Raj by not making a fuss — but also a little embarrassed that it is being transformed by its new airport.

Though he welcomed the new tourist money that has helped rebuild the old town inside the fort, he fears for the future.

As we stared over the city walls at a burgeoning ‘New Town’ growing below, he observed with resignation: ‘Twenty years ago, Jaisalmer only had 200 residents in the fort and none of this existed: now we are 89,000 — one does not know what is to become of us.’ My advice is the get there soon before the smog, the hubbub and the rickshaws descend.

Inspiring Travel Company (inspiringtravelcompany.com, 01244 435 077) offers a seven-night stay at Sujan The Serai, Jaisalmer, from £3,985pp including breakfast, flights and transfers. Based on two adults sharing.