The Good Hotel Guide’s hotels of the year, from a country house in Shropshire to a B&B in Derbyshire

A 200-year-old Irish harbourmaster’s house, a ferry inn on the shores of a Scottish loch, an old Welsh coaching inn and a Derbyshire longhouse are among this year’s winners of the Good Hotel Guide’s Cesar awards.

The 2020 Oscars of the hotel industry are revealed exclusively here… 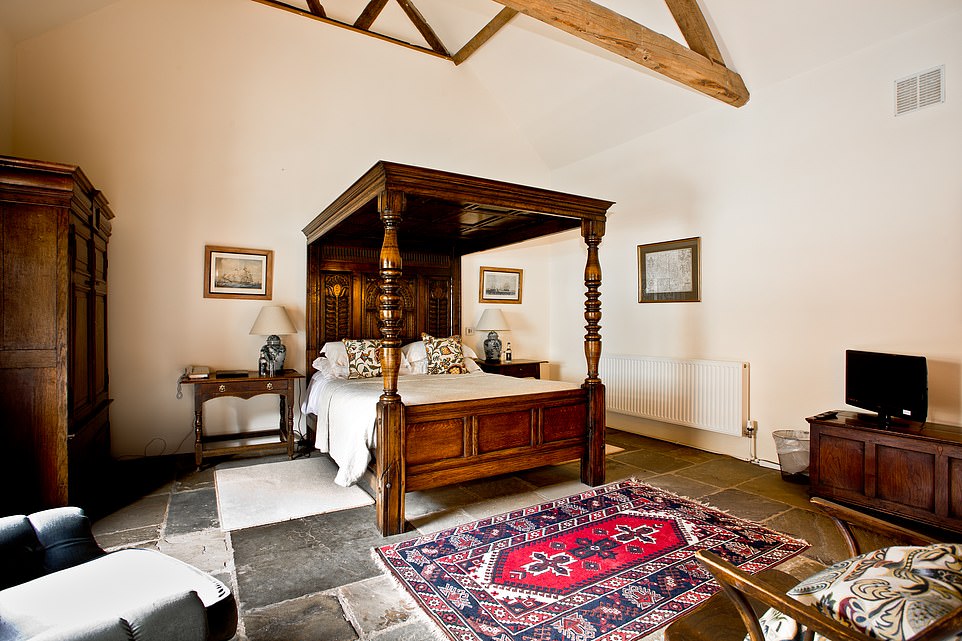 One of the bedrooms at Old Downton Lodge. The owners, Willem and Pippa Vlok, are hands-on, while well-trained staff make for a relaxing stay

A stylish conversion of barns and farm buildings deep in the countryside is laid out around a beautiful formal garden. Old stables make an inviting guest lounge.

The dining room, reminiscent of a medieval great hall, with dovecote windows, dates from the Norman conquest.

The owners, Willem and Pippa Vlok, are hands-on, while well-trained staff make for a relaxing stay — and the three-course tasting menu (£50) is memorable.

Don’t miss: Ludlow, just six miles away, described by John Betjeman as ‘the most perfect town in England’. 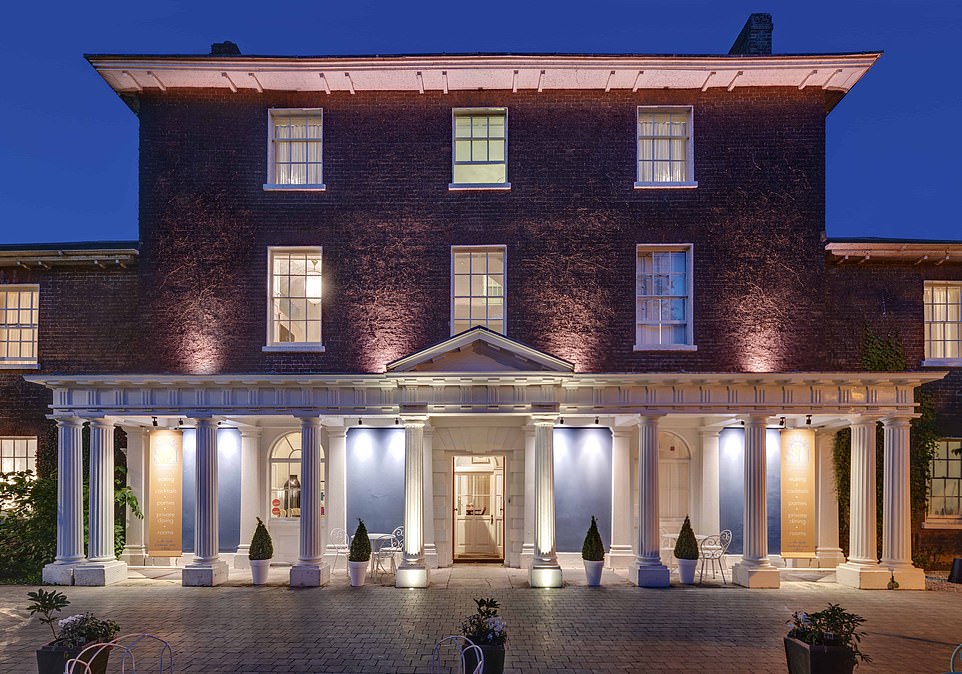 Bedrooms at the Southernay range from intimate to super-king size. The guide says it combines ‘heritage, urban cool, and charm’

A Georgian town house on a fine square just a short stroll from the cathedral. It combines heritage, urban cool, and charm.

Owned by Deborah Clark and Tony Orchard, who formerly ran Burgh Island Hotel, it hits all the right notes.

Don’t miss: A free glass of champagne if you book directly. 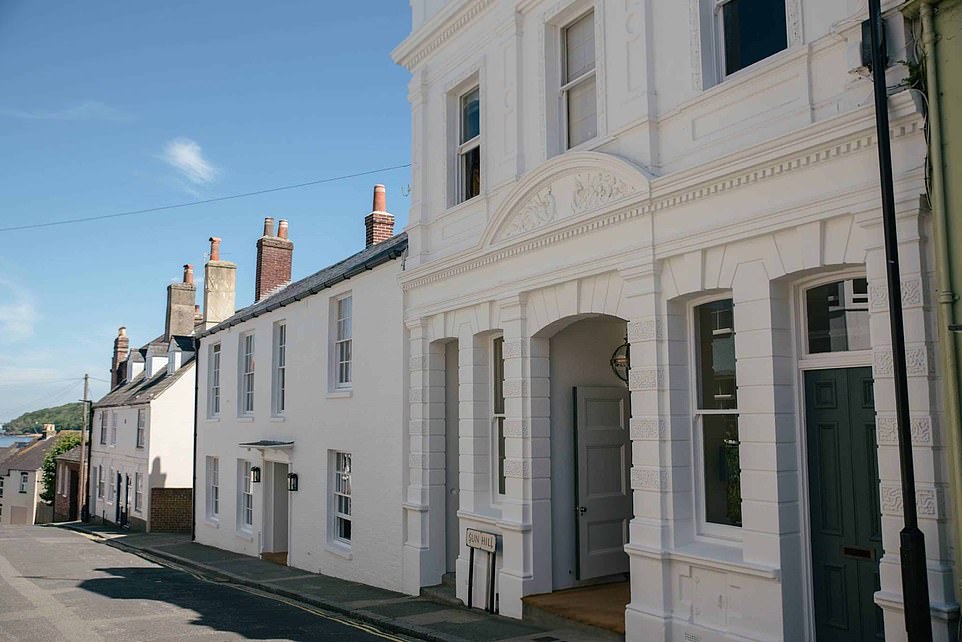 The North House in Cowes, pictured, is a boutique hotel on the Isle of Wight that lies just minutes from the yacht-filled Solent 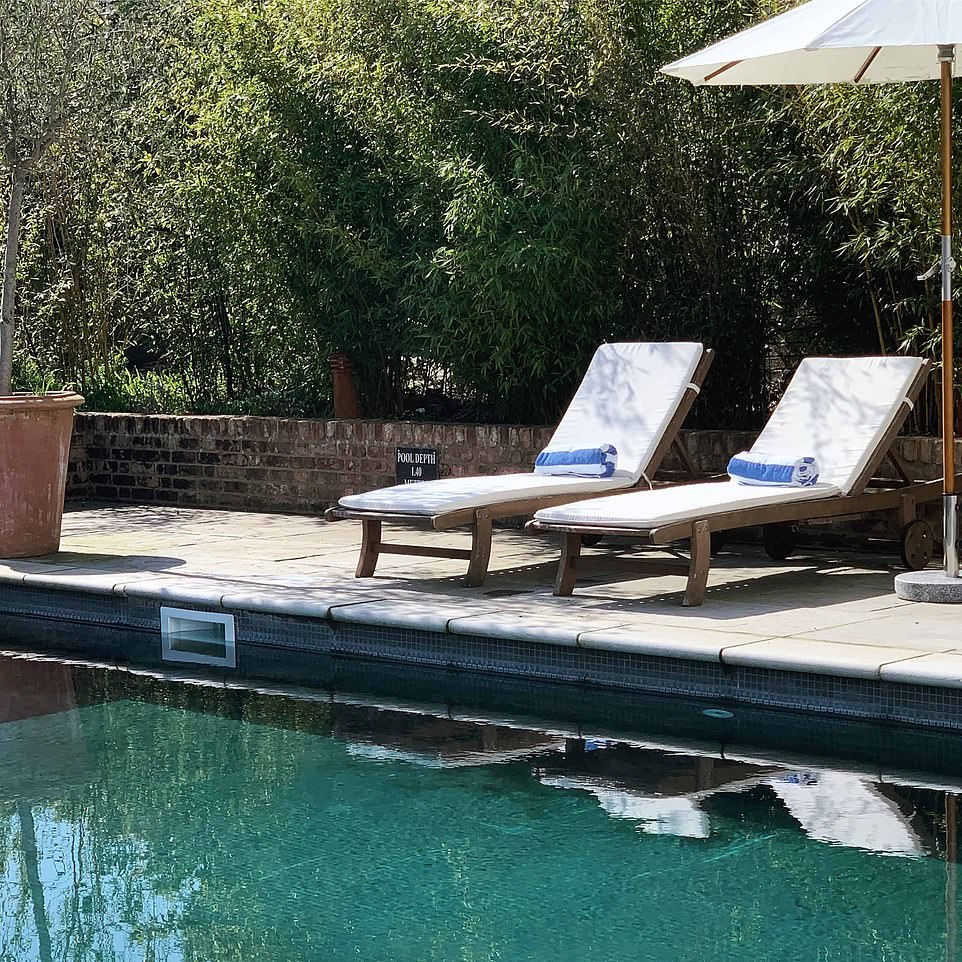 The North House’s owners are Luke Staples and Lewis Green. The guide names it the best new hotel for 2020

Its hands-on owners, Luke Staples and Lewis Green, preside genially over locally sourced food and charming staff. There is a pretty garden for outdoor dining and a swimming pool.

A fine example of how a small hotel should be run. 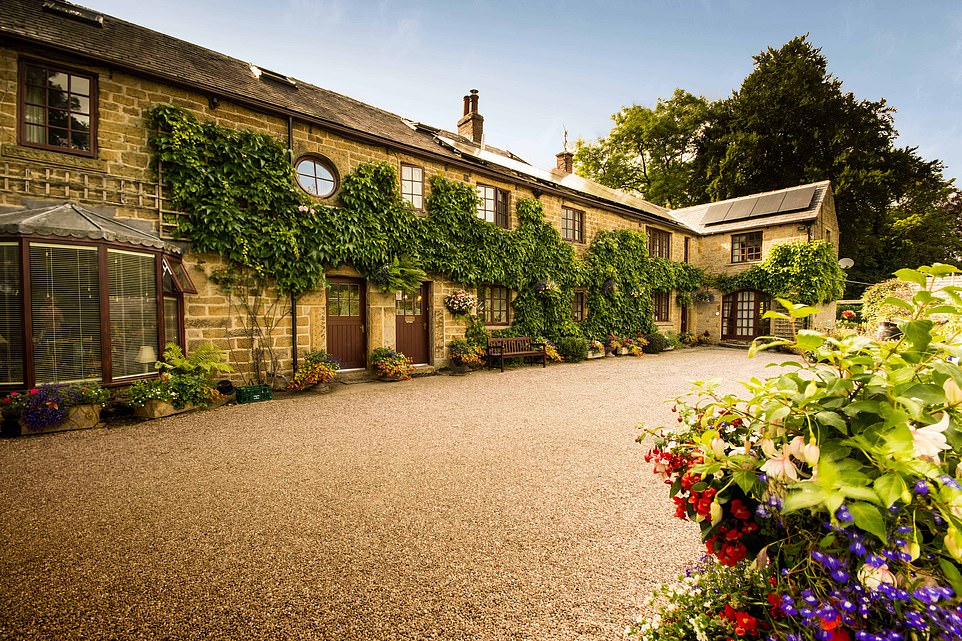 Underleigh, winner of the best B&B, is a longhouse overlooking Hope Valley in the Peak District National Park 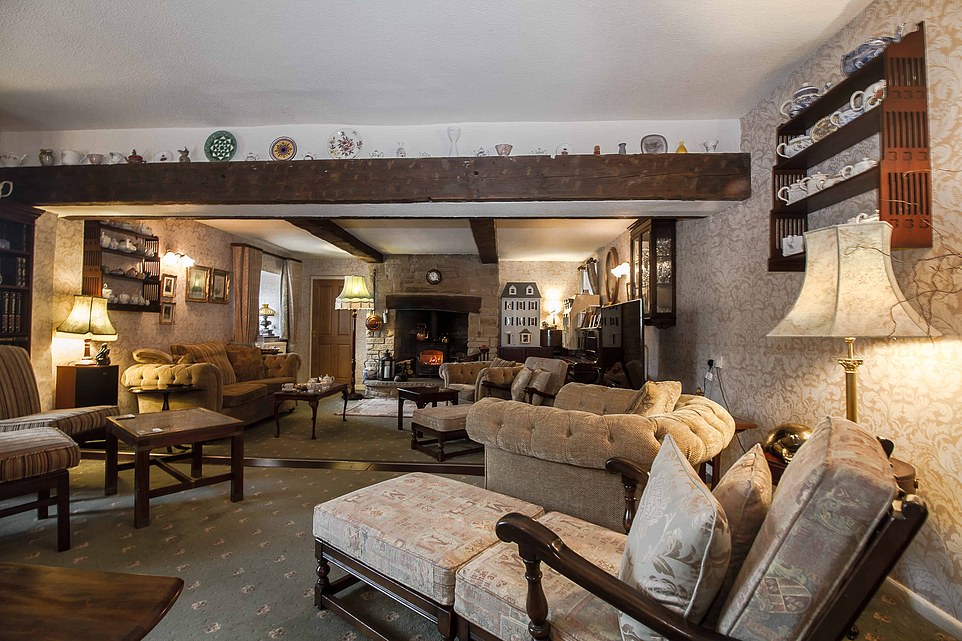 The lounge area in Underleigh. The guide says that is a ‘delightful B&B is run with attention to detail and impeccable green credentials’

A longhouse overlooking Hope Valley in the Peak District National Park, this delightful B&B is run with attention to detail and impeccable green credentials.

Three of the four well-equipped bedrooms are suites. There is a log burner in the lounge; breakfast is a social affair, served communally at a refectory table in a beamed former cattle shed, with a delicious array of fresh and local produce. 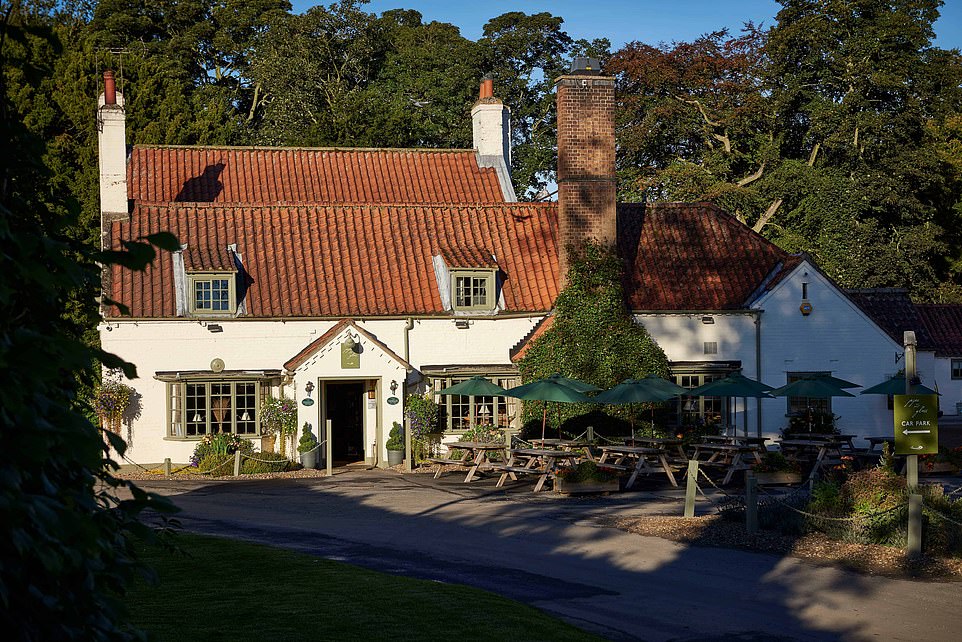 The Pipe and Glass in South Dalton, Yorkshire, is a former coaching inn that has held a Michelin star for over ten years

As well as being a gastropub, the Pipe and Glass has five comfortable, well-equipped bedrooms with striking modern décor

James and Kate Mackenzie’s former coaching inn has held a Michelin star for over ten years.

The light-filled restaurant has Barnsley chops, lamb-bellied boulangère and venison tartare as specialities. But this gastropub also wins plaudits for its five comfortable, well-equipped bedrooms with striking modern décor.

Don’t miss: The fine garden where everything from parsley and sage to roses and rosemary is used by James in his kitchen. 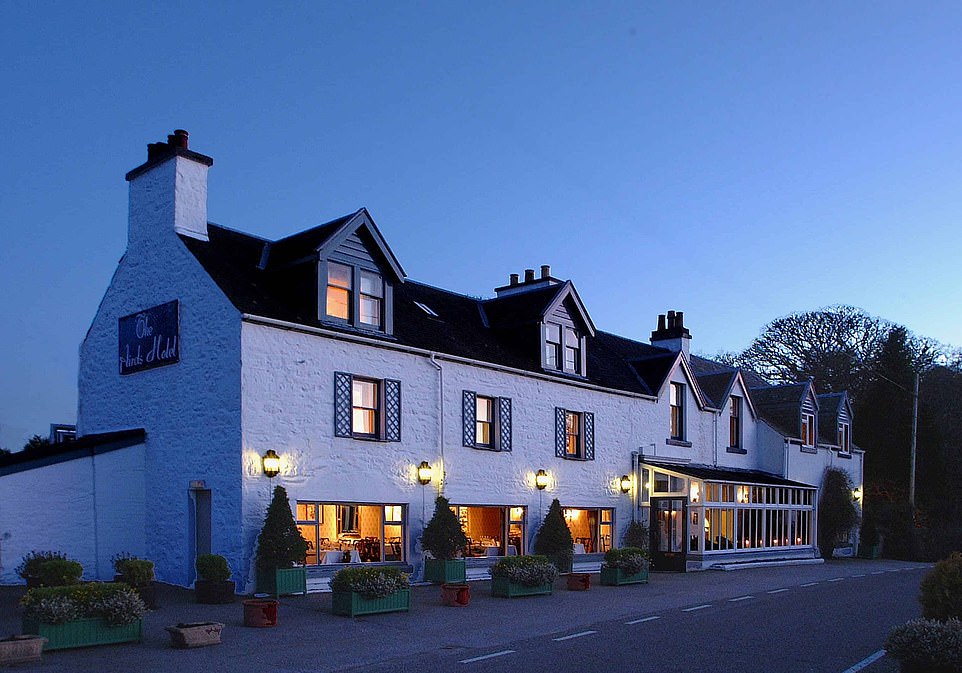 The Airds Hotel in Argyll and Bute, pictured, is a former ferry inn that is now a chic gourmet Relais and Chateaux hotel 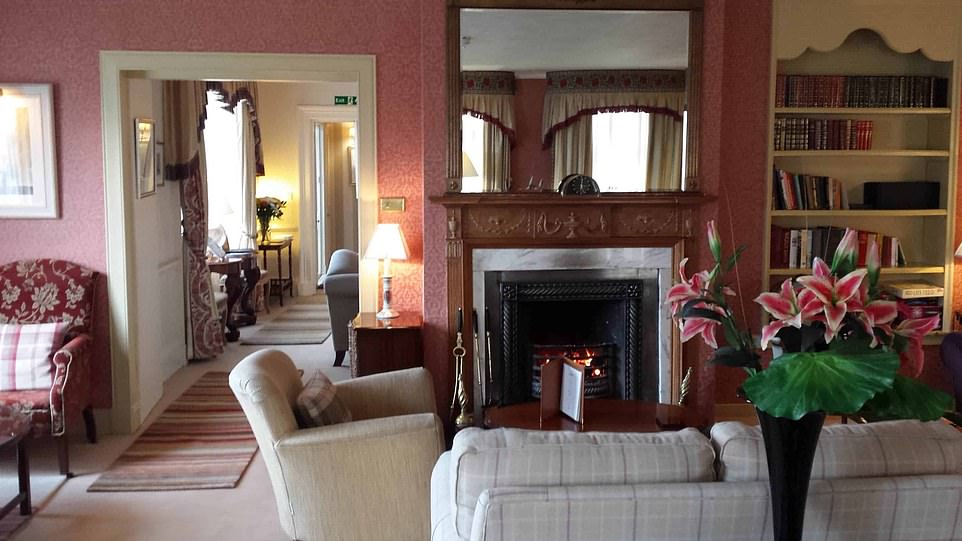 Guests can have a cream tea by the fire or drinks on the shores of Loch Linnhe at The Airds Hotel, pictured

From a cream tea by the fire to drinks on the shores of Loch Linnhe, this former ferry inn, now a chic gourmet Relais and Chateaux hotel, is a place of indulgence.

Bedrooms have designer fabrics and Bulgari toiletries. The talented chef works wonders with West Coast produce. There are fine views of the Morvern mountains. 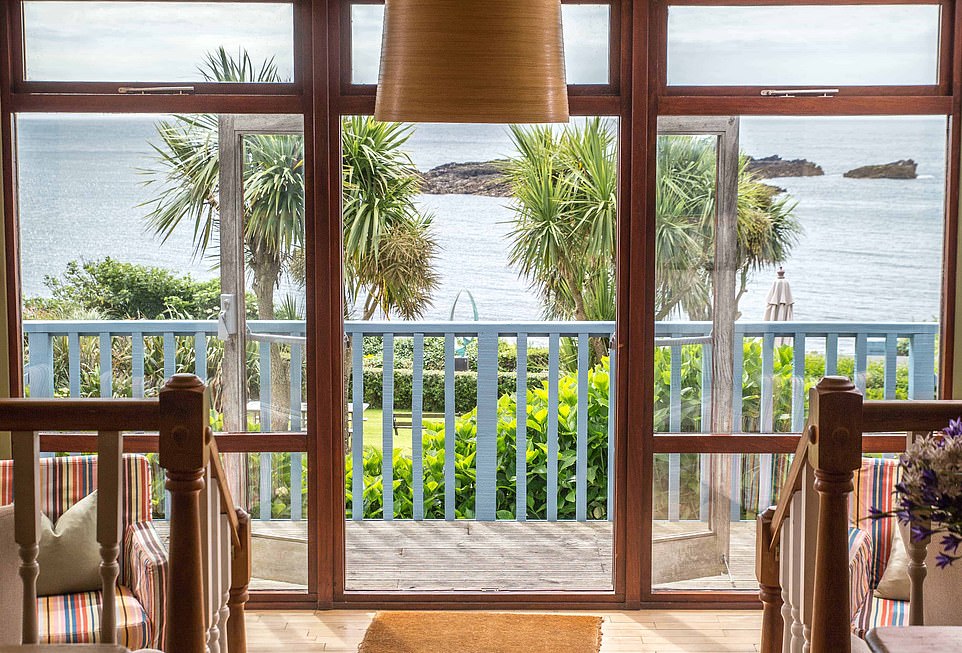 The Old Coastguard, pictured, is a Cornish fishing village inn that buzzes with both guests and locals 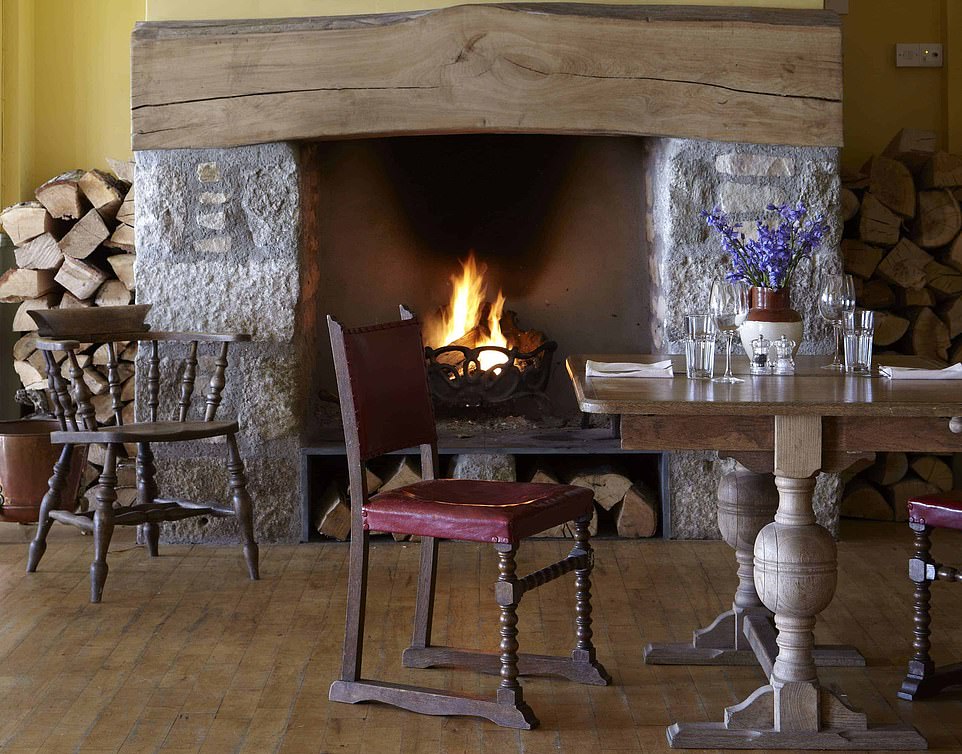 The Old Coastguard is rebuilding after a devastating fire; it will reopen early in 2020

Relaxed and classy, this Cornish fishing village inn buzzes with guests and locals. The friendly style of the Inkin brothers, Edmund and Charles, is the secret of its success.

Enjoy seaviews and locally landed fish on the terrace in the palm-filled garden. The inn is rebuilding after a devastating fire; it will reopen early in 2020.

Don’t miss: The Barbara Hepworth museum, in St Ives, which has the largest collection of her sculptures. 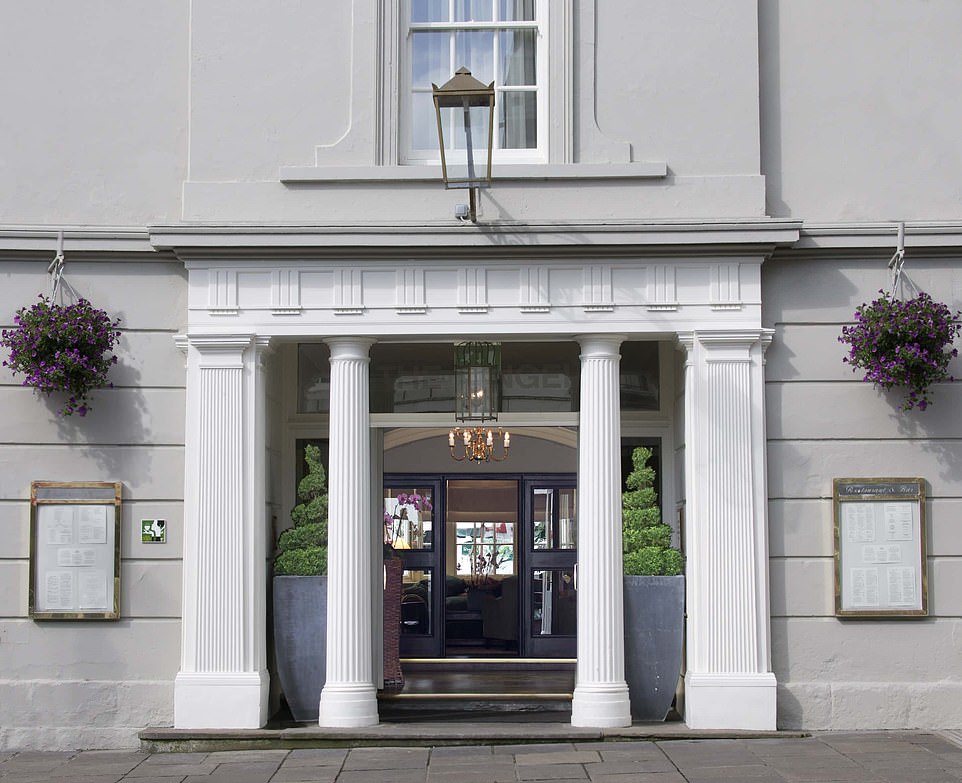 The Angel Hotel in Abergavenny is a family-owned former coaching inn that has friendly staff, eclectic menus, modern artworks and a splendid bar 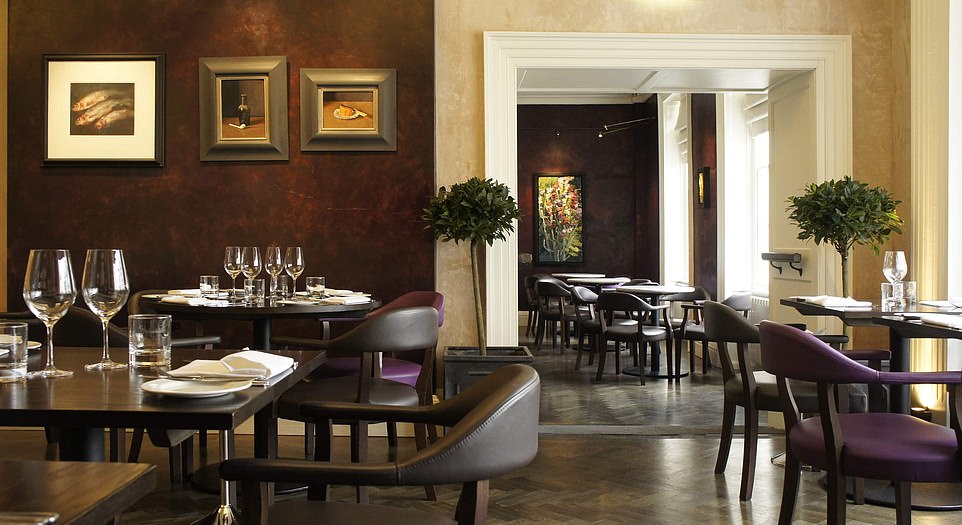 The hotel’s restaurant. Its afternoon tea with cakes from the bakery is famous

A model of a town hotel, this family-owned former coaching inn has friendly staff, eclectic menus, modern artworks and a splendid bar much patronised by locals.

The comfortable bedrooms have top bathroom fittings (Villeroy & Boch), aromatherapy toiletries and extra fluffy towels. The hotel’s afternoon tea with cakes from the bakery is famous.

Don’t miss: The 11th-century circular Abergavenny Castle, scene of many a bloody siege. 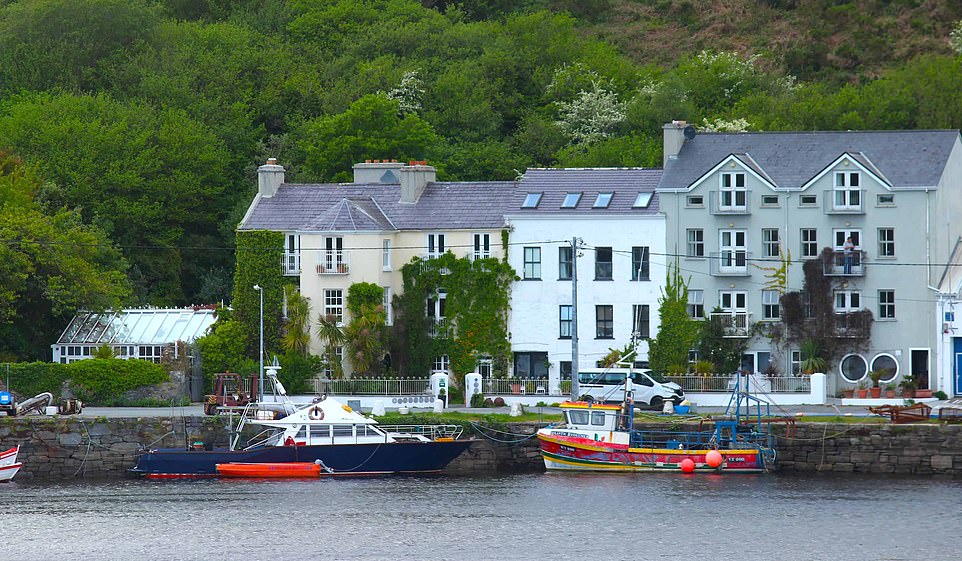 The Quay House in Clifden, County Galway, is a fun B&B that was formerly the harbour master’s house built in 1820 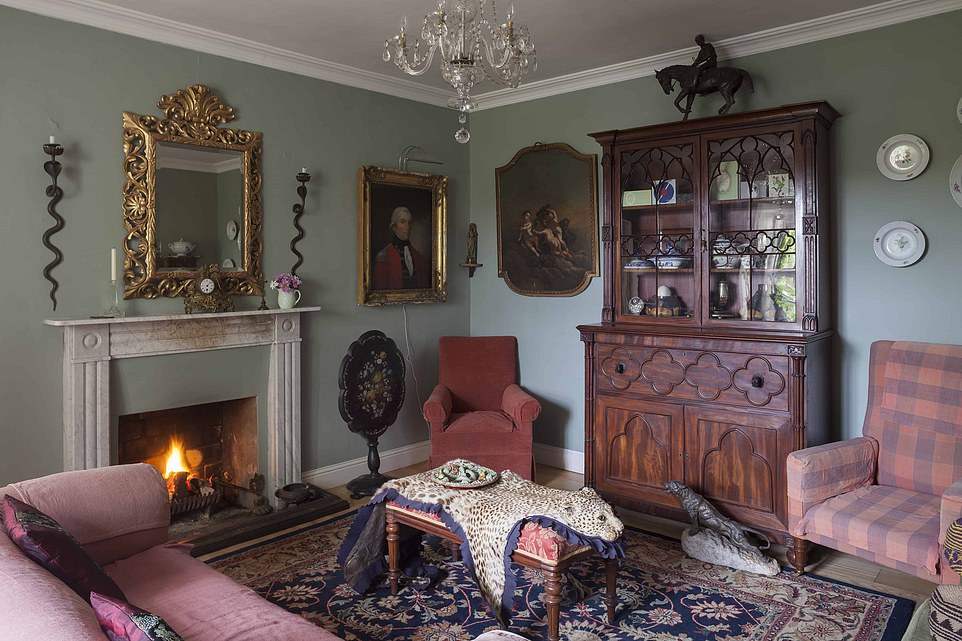 The Quay House is run by Julia and Paddy Foyle. According to the guide, the rooms have ‘great character filled with auction finds from a bust of Napoleon to a Marie Antoinette clock’

The bedrooms have great character filled with auction finds from a bust of Napoleon to a Marie Antoinette clock. Most overlook the harbour with a terrace or balcony.

Don’t miss: A cruise around Killary Harbour, where, with luck, you will see dolphins. 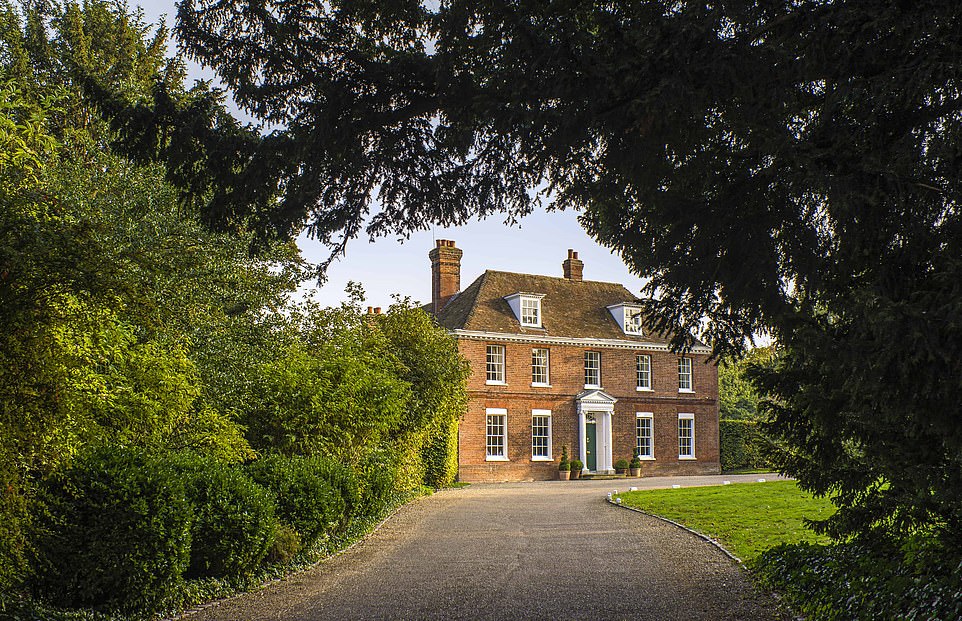 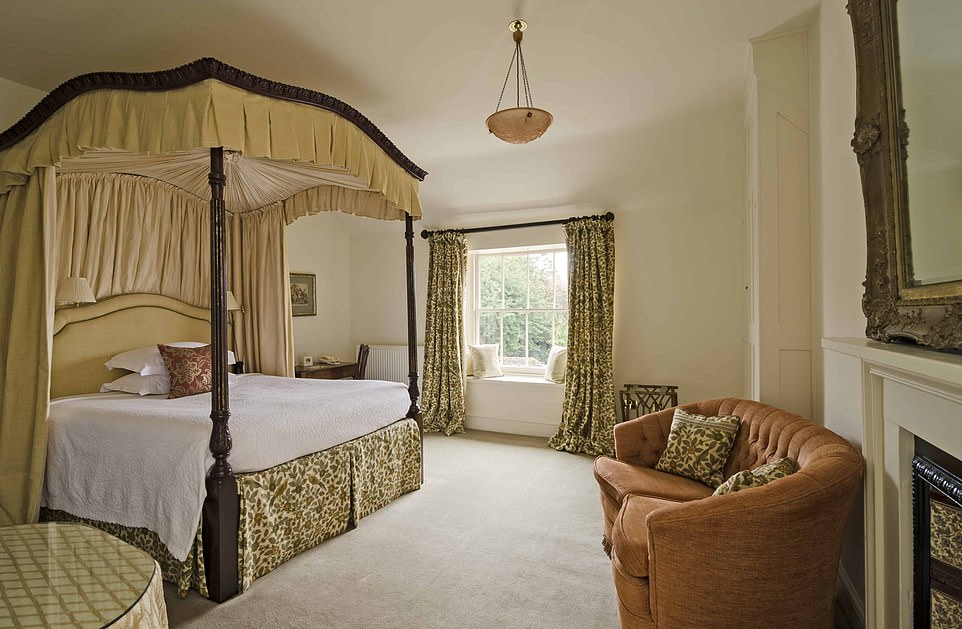 This stylish restaurant-with-rooms in a Georgian manor house on the outskirts of a market town is the place for foodies.

The fish arrives straight from Whitstable. The superb dishes include skate wing with capers and lime and thin slices of Serrano ham and caramelised figs.

Afterwards stagger up to a traditional-style bedroom furnished with antiques. At breakfast enjoy the home-made jams and lemon curd.