Before trying out this toastie, I was firmly on the fence about Christmas sandwiches – after all, they’ve never going to be as good as the actual meal so why bother?

Well, I’m eating my words now. This hearty focaccia sandwich is full to the brim with perfectly roasted turkey, traditional stuffing and cranberry sauce. But the tarragon mayo and melted cheddar takes it to the next level.

If only this new chain of cafes served it all year round. Lydia Hawken. 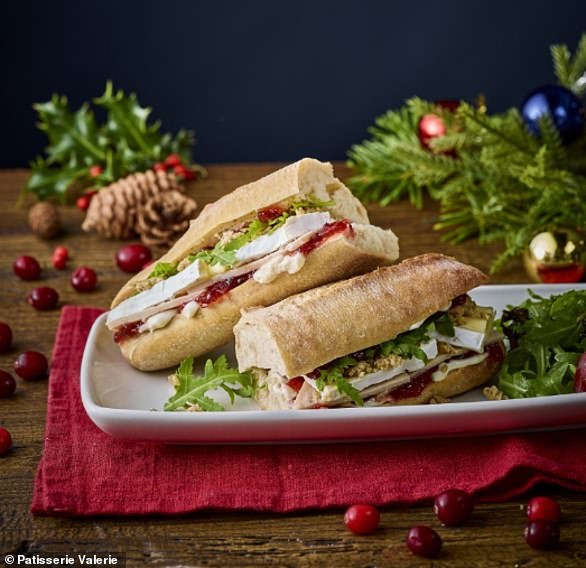 Every mouthful of this cheesy masterpiece brought joy to my lunch break like no other. While it is meat-heavy, the sandwich was not dry one bit, thanks to the delicious slices of brie and cranberry sauce.

And the pigs and blanket and turkey had a nutty flavour to this festive treat. The sandwich is of gigantic size, which means that big eaters will get their money’s worth.

It’s everything you want for a decadent pre-Christmas meal. Claire Tourielle 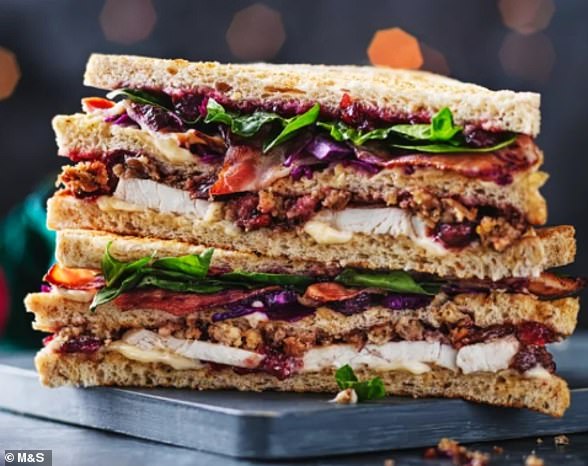 A chicken club sandwich is my go-to all-year round – so it’ll probably come as no surprise that I was a big fan of M&S’ epic 12 LAYER offering.

So what makes it stand out from the crowd? The toasted oatmeal bread paired with succulent turkey, bacon, onion stuffing, gravy mayo and pickled red onion makes for an unforgettable combo. 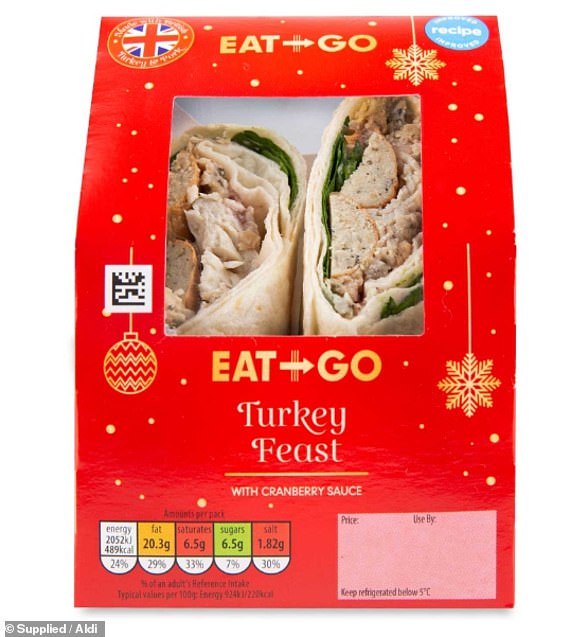 Aldi’s turkey feast was a hit with Libby Jarvis, who said it’s the perfect thing for when you’re craving Christmas dinner

This sandwich is perfect if you’re craving a Christmas dinner but can’t be bothered to cook one.

Turkey is lovely, sweetness comes from cranberry sauce and the stuffing gives it that ‘Christmassy’ feel.

It’s not overdone with extra meat like pigs in blankets. It’s very filling and I think it’s best really cold, it’s almost like a leftover of Christmas dinner. Libby Jarvis. 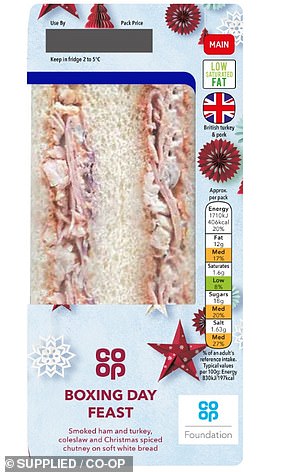 I love the combination of flavours and textures in this sandwich.

You can really taste the smoky flavour from the ham.

And it goes really well with the succulent turkey and creamy coleslaw.

There’s also is a slight sweet aftertaste of the chutney. 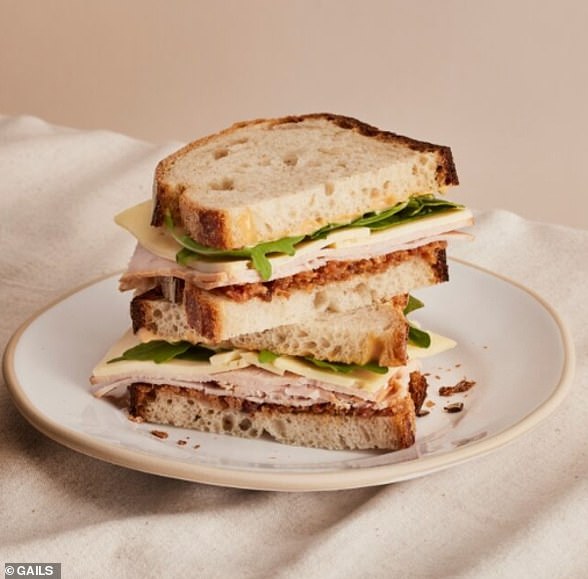 If you’re going to try out anything from Gails’ new festive range, make it this smoked turkey sandwich.

The wholegrain sourdough is a chewy delight while the bacon jam packs a real punch. 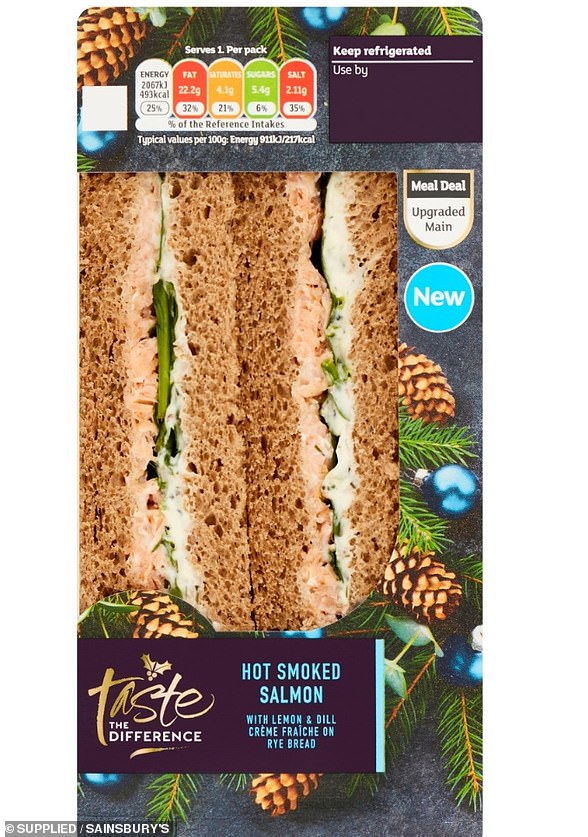 Sainsbury’s salmon sandwich was praised for its ‘plentiful smoked filling’

Flakes of salmon together with fresh zingy tastes of the lemon and dill crème fraîche. 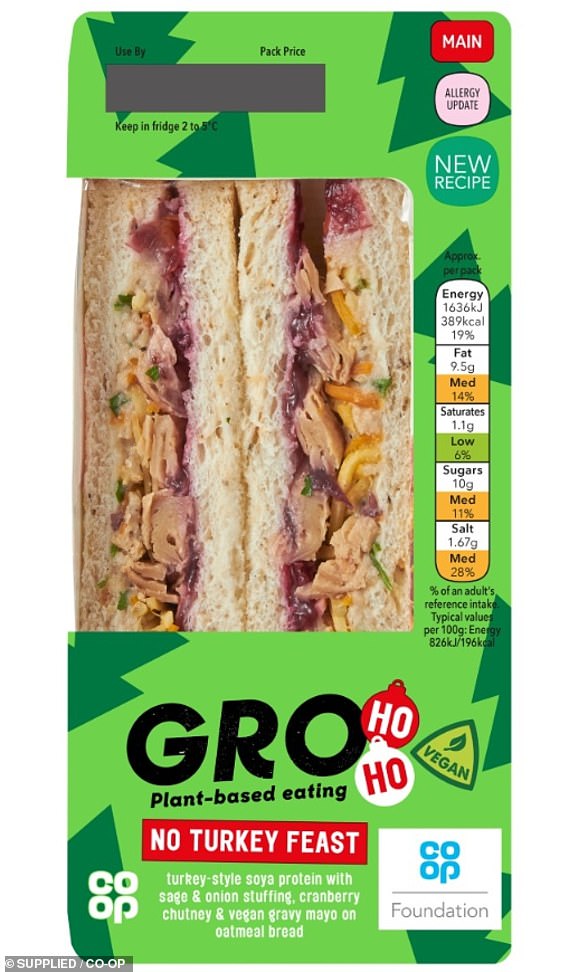 As a relatively recent veggie, the plant-based Christmas sandwiches I’ve tried before now have been a bit dry and don’t compare to the real deal.

But the generous amount of cranberry chutney and vegan gravy mayo make this one for me.

You can really taste the sage and onion stuffing too. Caroline Parr. 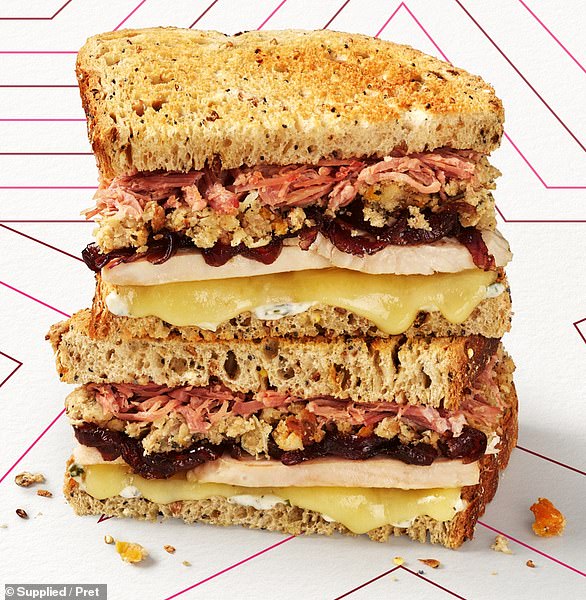 Turkey sandwiches aren’t my normal go-to at lunch – because let’s be honest, they’re almost always dry! I was pleasantly surprised by Pret’s festive offering. The combo of pulled turkey and ham was lovely and juicy and offset with a mild melted cheddar cheese.

If I had to criticise anything, it’d be that the sage stuffing and onion chutney were overpowered by the cheese – but it still made for a delightful afternoon pick-me-up. Lydia Hawken 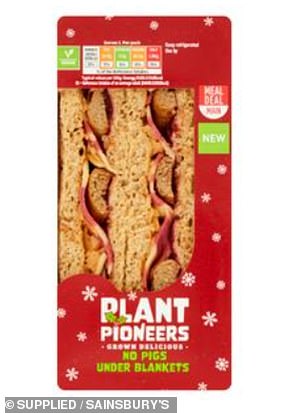 Going into my second festive period as a vegetarian, I had been worried about the quality of festive veggie sandwiches.

This offering from Sainsbury’s however ticks most boxes very well. The sausage and bacon gave the flavours of pigs in blankets, with added moisture from the cranberry sauce.

Only improvement could be the addition of a veggie stuffing, to really give satisfy the festive sandwich cravings of a former carnivore. Will Lees.

When picked up Aldi ‘Pigs under Cheesy blankets’, I knew I was going to be in for a treat – as it’s packed full of sausage, bacon and brie.

I decided to warm this up in the microwave using the directions on the back of the package my only criticism was that 1 min 50 seconds may have been slightly too long as the sandwich was a bit too hot to eat straight away.

But that is where my criticism ends – this sandwich was fantastic, very tasty and felt very fresh when heated up I would definitely have again. Justin Blundell. 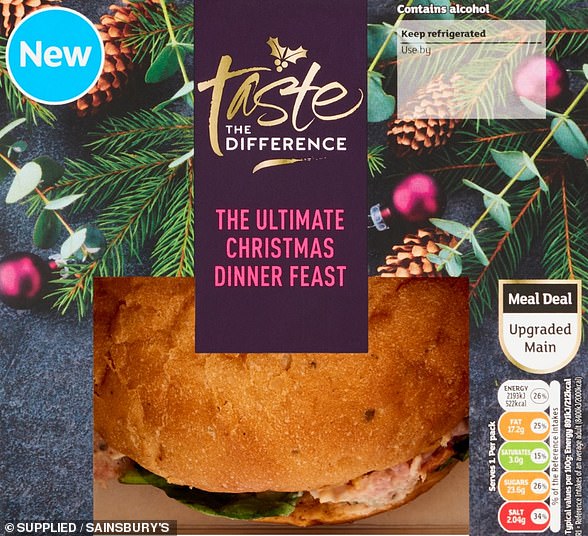 A bread roll that was full of flavour! Although it’s unusual to have a roast dinner in a roll, it was packed with filling and I did like the different textures of the veg and turkey.

The flavours were lovely and they got more pronounced as I continued eating the roll. Would have been a five star rating if it had been a hot! Paul Sinclair. 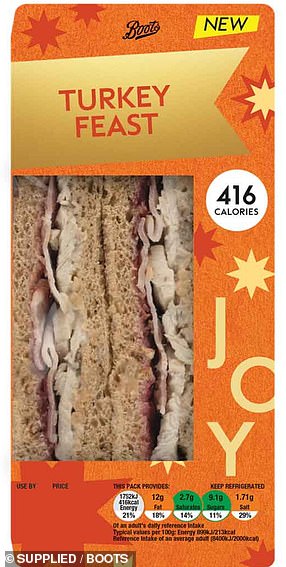 Elmira Tanatarova said this sandwich was nice and juicy

It would be unfair to ask a sandwich to carry with it all the flavours which are presented in a turkey ‘feast’ – but this one could have tried harder.

While I really enjoyed the touch of cranberry, unless you’re already a fan, it’s difficult to find many other ‘feast’ like qualities about it.

However, I would argue it was by far one of the nicer Christmas sandwiches I sampled and made more of a festive offering than other brands.

The turkey meat was lovely and not dry at all. Elmira Tanatarova.

Although I don’t normally go for a vegan lunch, this Pret baguette has converted me.

The mushroom, beetroot and pesto filling certainly packs a punch and is offset by the chewy ciabatta bread. 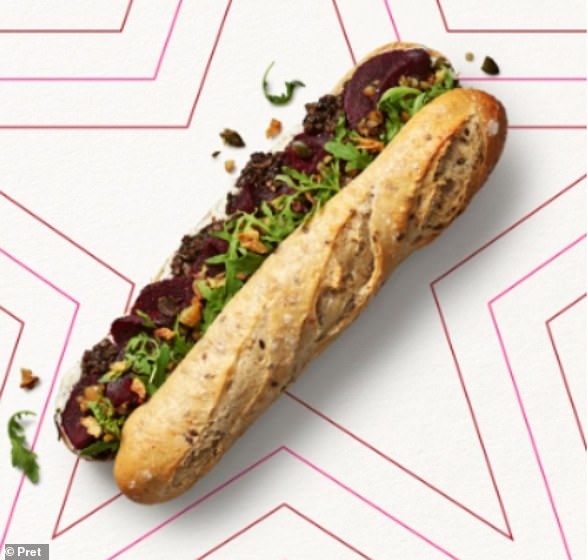 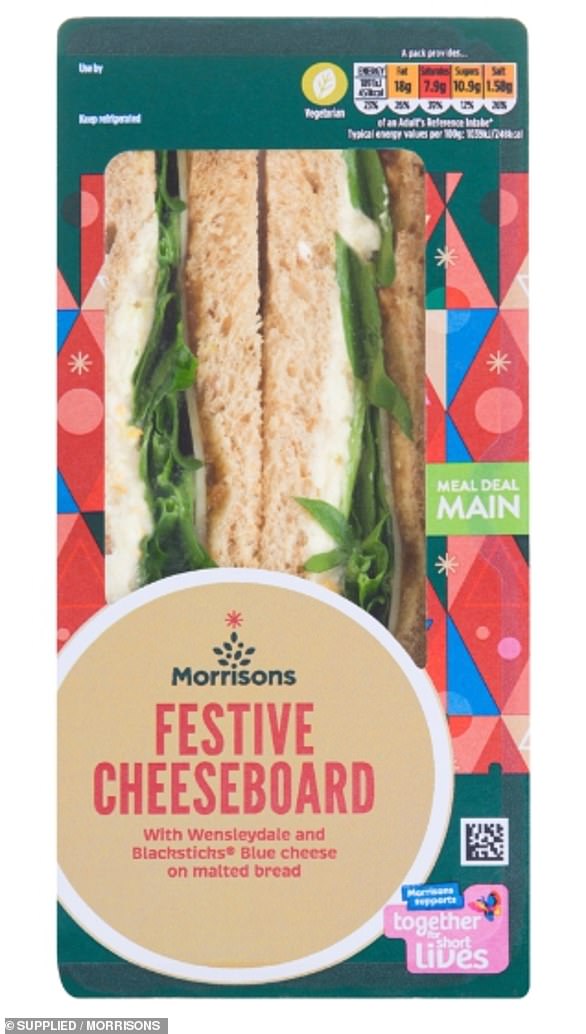 The combination of wensleydale and blue cheese blew Philip Josse away

This was excellent. A nice festive blend of cheeses and a good amount of pickle.

The piquancy of the blue cheese was particularly welcome and I’d definitely have again. Philip Josse 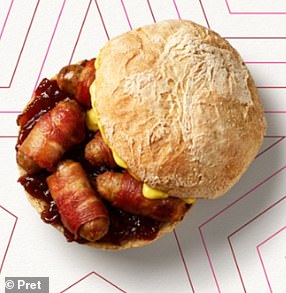 This is a sandwich that really does what it says on the tin.

The mustard mayo and the sweetness of the onions perfectly complement the salty sausages.

Although pigs and blankets can sometimes be quite tough, these were juicy and sweet and sandwiched in a delicious chewy roll. Jason Sinalir. 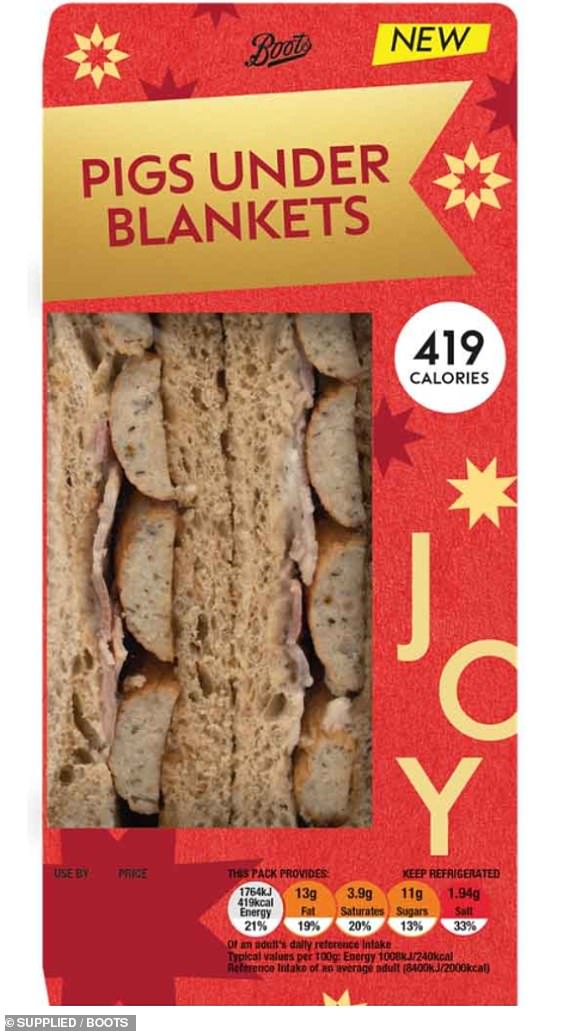 This pigs in blankets sandwich is ideal for people who don’t like cranberry sauce, according to Lydia Hawken

Not a fan of cranberry sauce? Then this is the sandwich for you. Instead of the super sweet festive condiment, Boots have made their balsamic onion chutney the star of the show.

On top of this, they’ve layered crisp bacon and pork chipolatas with creamy sage and onion mayonnaise.

My only criticism? The sausages were a little bland – but I’d take that over lashings of cranberry sauce any day. Lydia Hawken. 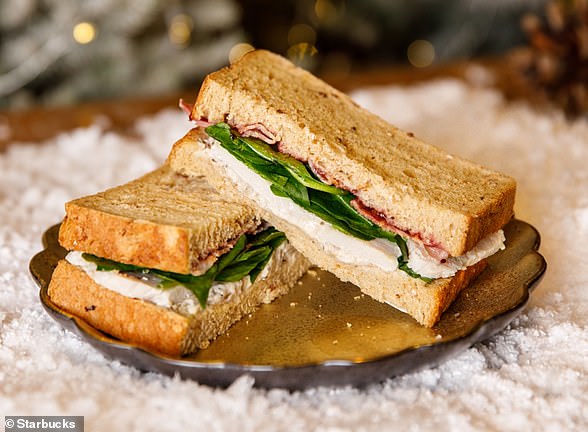 Remember Ross Gellar’s infamous ‘moist-maker’ sandwich in Friends? This is the closest I reckon I’ll ever come to it in real life.

Although I wouldn’t get myself suspended from work if a colleague nicked it from the fridge, it’s a solid contenter in the turkey sandwich olympics. Lydia Hawken 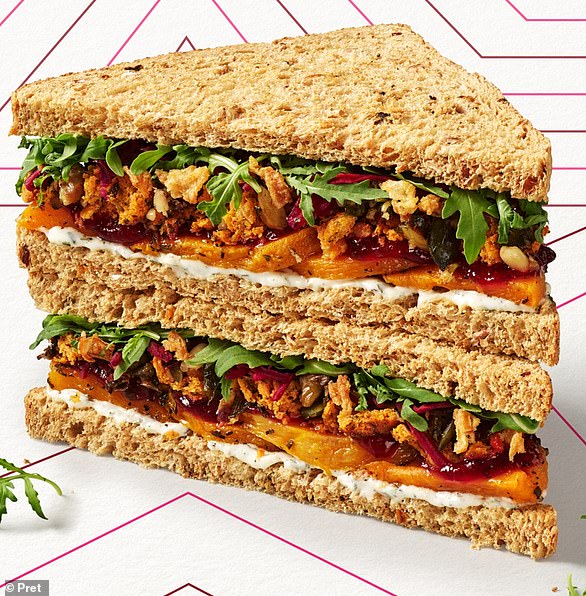 This sandwich was packed full of filling and flavour including plenty of Christmassy chestnuts, which were surprisingly pleasant.

I really enjoyed all the different texture. This was a winner for originality and the surprising ingredients. Alison Sinclair.

I really like the combination of prawn and apple, it’s one I would never have chosen in the past, but will be adding it to my top 10!

I would say though that prawns are quite delicate and the baguette that has been chosen is quite a dense one.

I would be more inclined to put the filling in an artisan rustic bread that isn’t so dense. Nicole Pearce. 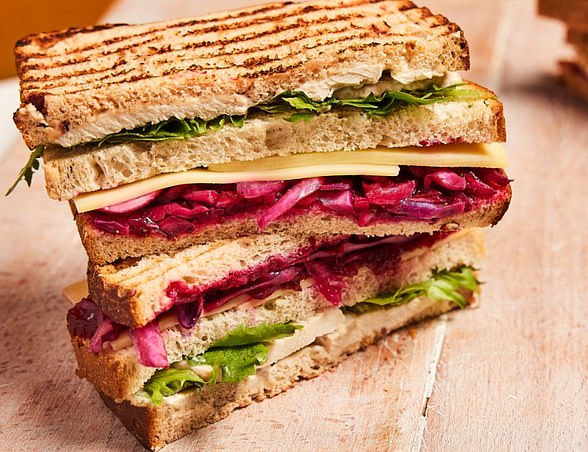 This was a solid entry. The bread was nice and soft and the turkey was delicious.

The onion and bacon trimmings made for a welcome addition and I warmed it up in the microwave too. Oksana Salivanova.

Daisy Hobbs enjoyed the ratio of filling in this Paul sandwich

Baguette may have been a bit dry but ultimately, there were good quantities of each filling so the ratios were spot-on.

There weren’t cranberries in every bite which provided a nice mix of slightly sweeter and sometimes more savoury bites. I’d certainly have again! Daisy Hobbs. 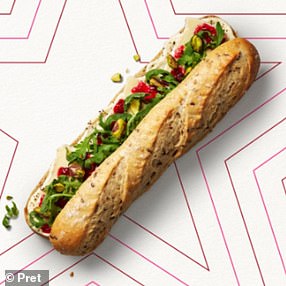 The only way this sandwich could be improved is by adding more pistachios, according to Paul Sinclair

This is a great baguette. You can’t beat a brie in my opinion!

There was plenty of smooth and creamy cheese topped with cranberry sauce and some zingy port.

My only complaint is that I would have liked more pistachios. Paul Sinclair. 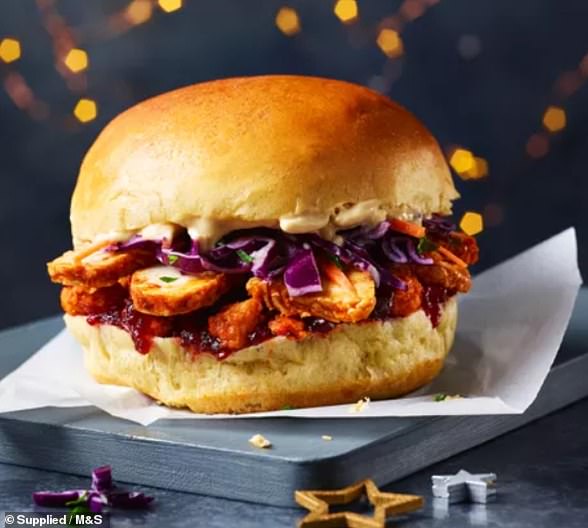 For me, this was a decent stab at a Christmas sandwich by M&S. No gimmicks, no sickly sauces which manufactures seem to think the public are in love for (they are not).

Plus, in difficult times they don’t skimp out on the turkey, either. And what’s more, replacing your standard slab of brown bread with a brioche seemed to work. Tom Scotson. 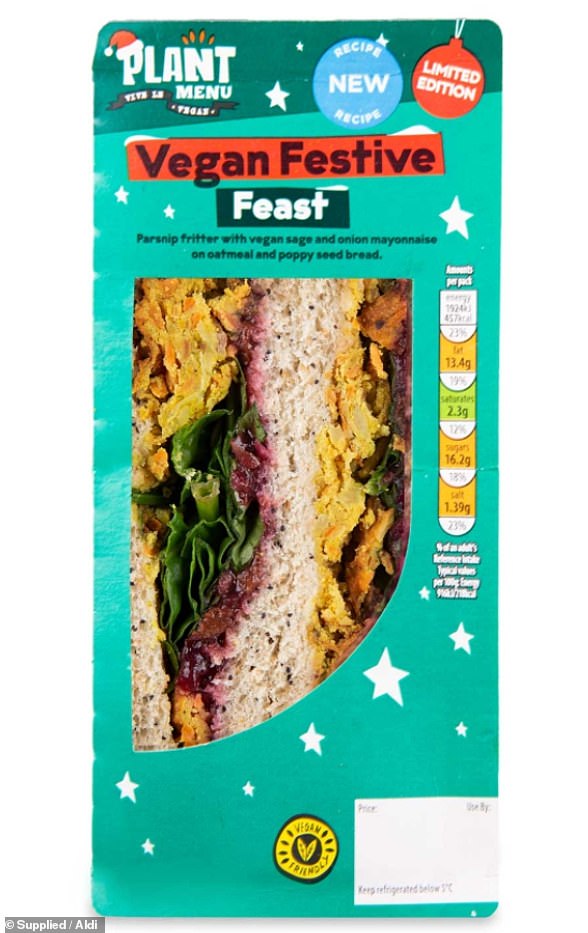 As a vegan, I was super impressed with Aldi’s offer of a plant based, vegan festive sandwich. It didn’t mimic meat but instead offered a tasty parsnip fritter which oozed Christmas as I chewed.

The only thing I would say negatively about the sandwich was that there was a little too much cranberry in it, a flavour which is super overpowering.

But I would give this a solid thre for the taste of Christmas and catering to us plant-based folk! Amie-Beth Steadman