The Great Jubilee Pud Bake Off! Who’ll be crowned winner in the Queen’s Platinum Pudding contest?

When the Queen wants pudding, she chooses from a red leather- bound book of royal menus – written in French – and then instructs her chef three days in advance.

A minty Bombe Glacée Royale is in there, naturally, along with her lifelong favourite, a featherlight lemon posset.

Now the nation is to see another dish added to the monarch’s list, a new dessert created for her Platinum Jubilee celebrations in June.

Five of her subjects have toiled towards the honour of creating a dessert dedicated to the Queen’s 70 years on the throne.

And, like the Coronation Chicken that marked the crowning of Her Majesty in 1953, and the Battenburg and Victoria Sponge cakes synonymous with Queen Victoria’s reign, it’s guaranteed to become part of culinary history.

The winner has been chosen in a Platinum Pudding bake-off launched in January and judged by queen of cakes Dame Mary Berry, whose recipes are so popular with the Royal Family that ‘Mary’ was one of the first words uttered by Prince Louis, according to his mother the Duchess of Cambridge.

They will be revealed in an hour-long BBC1 special, The Jubilee Pudding: 70 Years In The Baking, broadcast this week, when viewers will see the five finalists assemble their creations and the winner crowned by the Duchess of Cornwall

It’s been tough to judge. Comparing the puddings is like comparing apples and pears – or in this case a Passion Fruit And Thyme Frangipane Tart and a sponge Bundt cake in the shape of a crown, with a dollop of Dubonnet jam.

The tart is the work of mother-of-two Kathryn, 29, from Oxfordshire, a composer and oboist.

Her chief tester was her husband Mike. ‘He was worried about the level of thyme and making sure it didn’t taste like a roast dinner!’ she laughs.

The Bundt cake was created by Sam, 32, a lawyer from Warwickshire whose greatest fear was getting her sculptural sponge out of its tin without a crumby catastrophe on the day.

‘Dame Mary came along at the crucial moment,’ she recalls. ‘Thankfully it turned out perfectly, which was a relief.’

Dubonnet is a canny addition since a Dubonnet cocktail – two parts Dubonnet to one part gin – was the Queen’s favourite drink until she was reportedly told to give up alcohol last year. 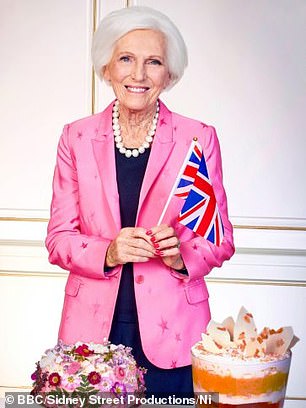 Dame Mary Berry (pictured) will judge the winner of the Platinum Pudding bake-off. The winner of which will be included in the Queen’s red leather- bound book of royal menus

But Sam’s personal appeal to the monarch faces opposition from other inventive puddings.

London mother-of-two Shabnam made a Rose Falooda Cake, which has its origins in Mumbai. She believes it embodies the Queen’s love of the Commonwealth, which she’s headed since her accession in 1952.

‘Queen Elizabeth has embraced a multiracial, multicultural society and I wanted my cake to reflect that,’ she says.

Closer to home, Susan, 65, from Argyll and Bute, who works for the National Trust, has made a Four Nations Pudding in honour of England, Scotland, Wales and Northern Ireland.

‘I wanted to create a pudding that would represent the UK using something special from each part of the nation,’ says Susan.

‘There are Scottish berries, Yorkshire rhubarb, Welsh Cakes and Irish butter and cream. My aim was to unite us and make the Queen smile.’

These ingenious bakes are going up against the romance of the entry by copywriter Jemma, 31, from Southport. Her Lemon Swiss Roll And Ama­retti Trifle invokes the lemon posset puddings often served to the Queen and the Duke of Edinburgh during their 73- year marriage. 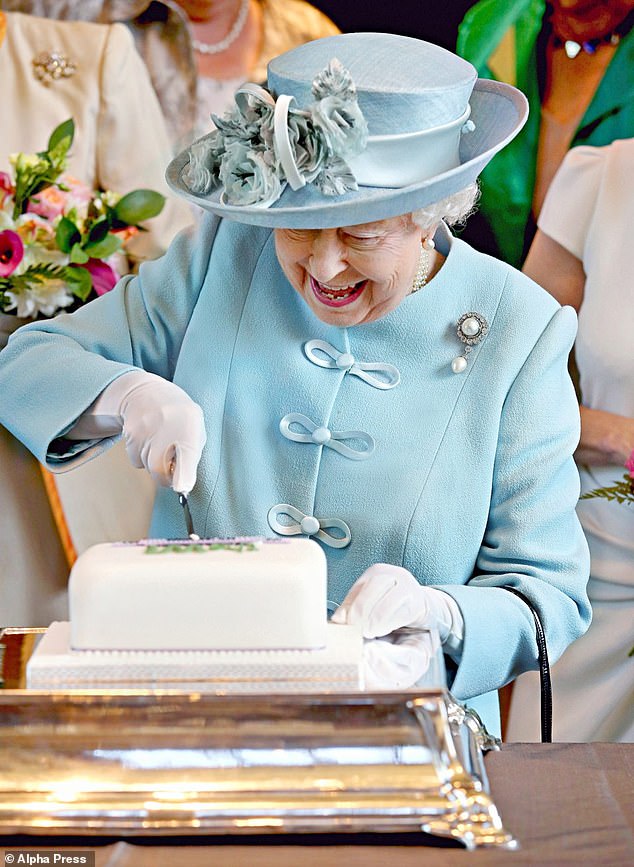 The Queen cutting a cake at an event. The Platinum Pudding competition marking her 70 years on the throne was launched by royal grocer Fortnum & Mason, in conjunction with the Royal Household and The Big Jubilee Lunch, whose patron is Camilla

Lemon posset can be found on royal menus as far back as 1956, when it was served at London’s Guildhall in celebration of the couple’s return from an official visit to Nigeria.

Former royal chef Darren McGrady says he often made it for her, accompanied by amaretti cookies and blueberries from Buckingham Palace’s own back garden.

Her Majesty has a sweet tooth – McGrady has outed her as a ‘chocoholic’ – so she is doubtless looking forward to sampling the winning dish.

The Platinum Pudding competition marking her 70 years on the throne was launched by royal grocer Fortnum & Mason, in conjunction with the Royal Household and The Big Jubilee Lunch, whose patron is Camilla. Following the success of the first Big Jubilee Lunch marking the Queen’s 2012 Diamond Jubilee, The Big Lunch initiative has encouraged communities to get to know each other by sharing a meal. 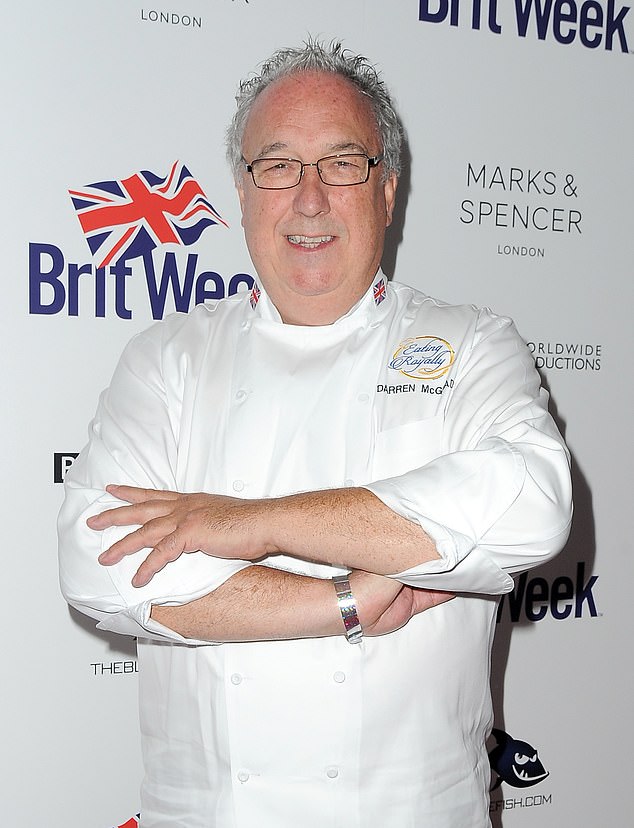 Former royal chef Darren McGrady (pictured) says he often made it for her, accompanied by amaretti cookies and blueberries from Buckingham Palace’s own back garden

Entrants to the competition had to be home cooks and their showstopping bake had to be makeable in an ordinary kitchen using everyday ingredients, but with the potential to become a classic. Almost 5,000 bakers put on their aprons and gave command performances in British kitchens stretching from John O’Groats to Land’s End.

A shortlist of 50 was whittled down to just five by Buckingham Palace head chef Mark Flanagan and Roger Pizey, executive head of pastry at Fortnum & Mason.

The BBC programme tracks the finalists as they make their way towards Fortnum’s famous blue-green doors.

The store has been synonymous with jubilees since King George V’s Silver Jubilee in 1935 when it opened a special department to cater for the princes and potentates who had travelled to London.

The competitors were under the eyes of a team of judges led by Dame Mary. It included Mark Flanagan, MasterChef presenter and restaurateur Monica Galetti, and Matt Adlard, who rose to stardom on YouTube as the Topless Baker.

Kathryn, whose pud involved pastry, was anxious about cooking in front of Dame Mary. ‘I thought, ‘I simply can’t have a soggy bottom…’

The winning recipe will be made available on recipe cards with expert tips from the Fortnum & Mason kitchen team and on the BBC and Fortnum’s websites. It is expec­ted to be made at many of the 200,000 Big Jubilee Lunch street parties held between 2-5 June.

A Platinum Pudding is a lighthearted but appropriate way to celebrate the monarch’s milestone, since a fondness for pudding has run like piped icing through the family for generations. Queen Victoria had chocolate sponges, wafers, petit fours, princess cakes, pralines and sweeties boxed up and sent into court four times a week from the kitchens at Windsor.

And it might even be that we one day discover the Duke of Cambridge has been groomed for kingship over Chocolate Biscuit Cake. It’s Her Majesty’s runaway tea table favourite and Prince William grew to love it so much he had one made for his wedding to the Duchess of Cambridge.

Now the spirit of this Platinum Jubilee year, celebrating country, community and family, is being baked into a new royal pudding.

As Susan says, ‘If five girls can all get together and bake something, with the single aim of honouring our Queen, anyone in the country can have a go, celebrate, make new friends and just have fun with baking. It doesn’t have to be perfect. It just has to be about sharing and reaching out to other people.’