The great political divide… on face masks! Tory benches opt against own guidance in Commons

Most Tory MPs refused to wear a face covering today as Parliament returned to full capacity for the first time since Covid struck — but the opposition masked-up in a sign of how politically divisive masks have become.

Government guidance recommends masks are worn in ‘crowded and enclosed spaces’, yet all but two frontbench ministers — Michael Gove and security minister Damian Hinds — declined to wear one in the packed Chamber.

MPs were crammed shoulder-to-shoulder into the House for the first time since March last year to debate the situation in Afghanistan and were not required to socially distance or wear a face covering.

By contrast, virtually everyone on the opposition benches opted to wear one, including Labour leader Sir Keir Starmer and his deputy Angela Rayner.

Boris Johnson led those on the Government’s front benches who declined to wear a covering, including Chancellor Rishi Sunak, Foreign Secretary Dominic Raab and Ben Wallace, the Defence Secretary.

The Tory backbenches were almost entirely mask-less, with former Prime Minister Theresa May and ex-Health Secretary Jeremy Hunt among a small number of outliers.

Commons Speaker Lindsay Hoyle — a former Labour MP— has urged mask-wearing in the Chamber but he does not have the power to enforce it.

Today’s emergency debate was the first to be held under new post-Covid rules which mean MPs have to attend in person to be able to say something. MPs are no longer allowed to dial into Commons debates via Zoom, which became the norm in lockdown. 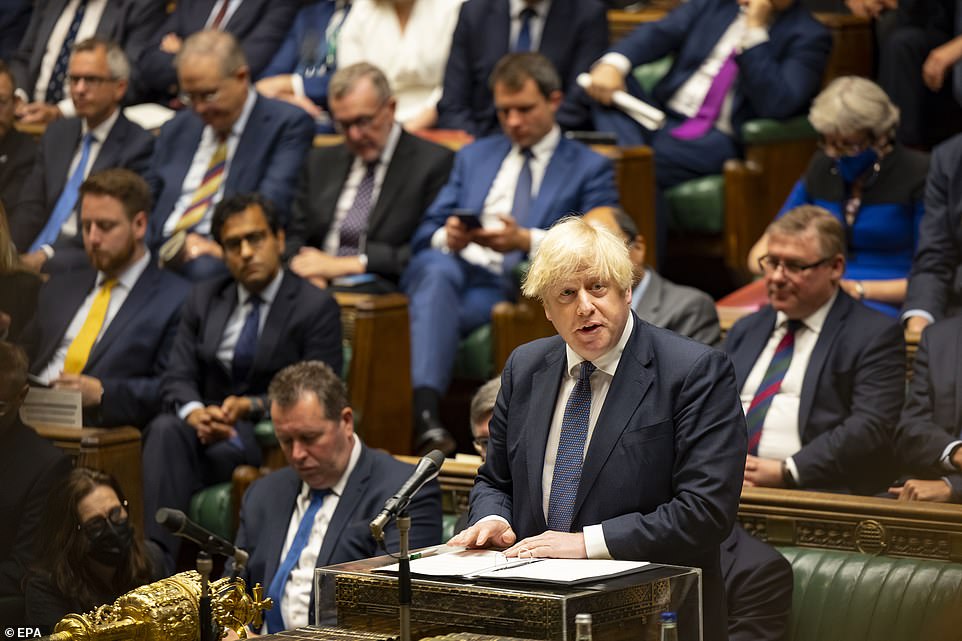 Boris Johnson led those on the Government’s front benches who declined to wear a covering. The backbenches were almost entirely mask-less too 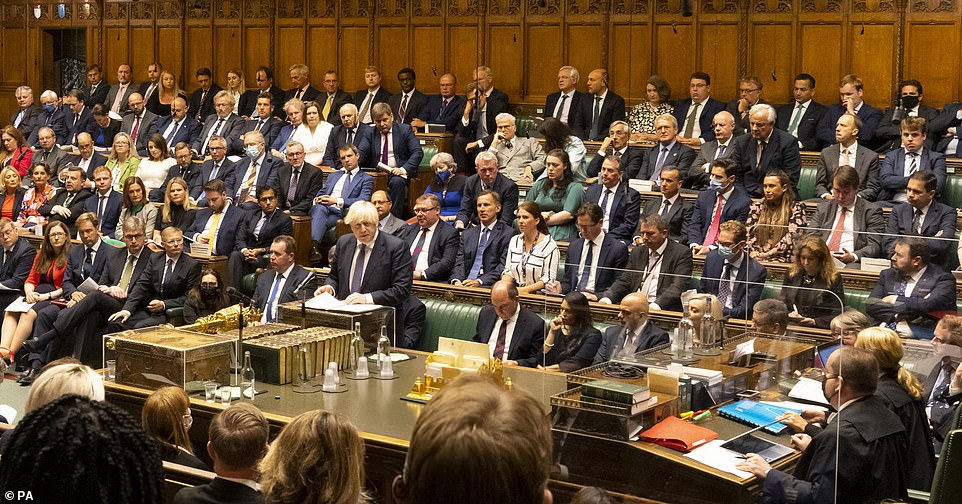 The move by many Conservatives to ditch their masks came hours after a public health expert urged MPs to wear them to set a good example.

Edinburgh University professor of public health Linda Bauld acknowledged that while it might be difficult to make a speech in Parliament with a mask on, it would be ‘good practice’ for them to be worn when not speaking.

She said: ‘The virus is airborne, we currently have slightly rising numbers of cases, so it is a protective measure that they can take and I’m sure everyone in public health would agree when indoors we should do that where possible.

Britain’s daily Covid cases are not showing any signs of slowing down yet, official figures suggested today.

Department of Health bosses posted another 33,904 positive tests, up 14.5 per cent on last Wednesday’s figure of 29,612 — despite swabbing levels remaining flat. 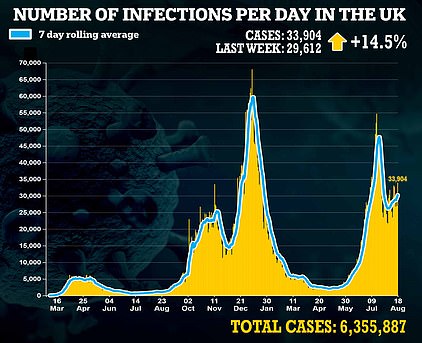 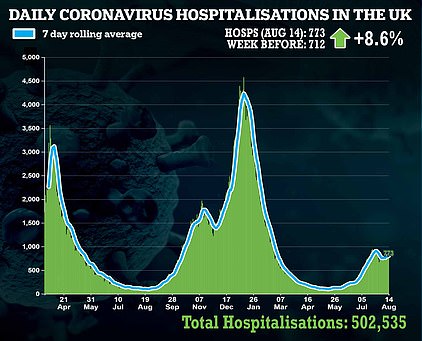 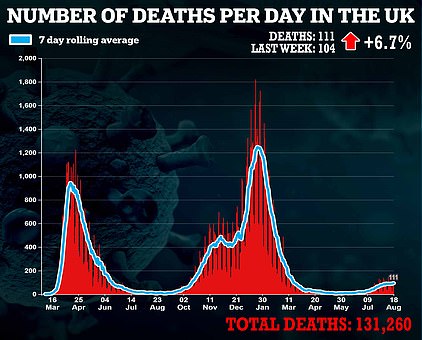 Another 111 fatalities were recorded today, up 6.7 per cent on last week. The average daily toll, which hasn’t stood in triple figures since March, is now around 94.

‘It is important that people who are in positions of authority lead by example, and that’s been a bit of an issue throughout the pandemic in a whole variety of respects but continues to be the case.

‘If public figures are wearing them indoors, that will encourage others to do that in working environments even if it’s advisory.

‘When you’re in a crowded indoor environment and distancing, as in two metres, is not possible, then a face covering does provide additional protection.

‘And I think if members of the public are seeing a crowded indoor environment, where those mitigations are not being used when they’re available, that’s not best practice and it may send a message in relation to other environments that people are accessing.’

Since July 19 face coverings have not been mandatory in England, but Government guidance says they are recommended in crowded and enclosed spaces.

It says: ‘We expect and recommend that members of the public continue to wear face coverings in crowded and enclosed spaces where you come into contact with people you don’t normally meet.’

It adds that people should ‘use your judgment in deciding where you should wear one’.

Asked why a number of MPs were not wearing masks in the House of Commons, the Prime Minister’s official spokesman said it was a matter for the parliamentary authorities.

The spokesman said the advice ‘still remains’ that face coverings should be worn in indoor crowded spaces.

But he added: ‘The arrangements for the House are a matter for the parliamentary authorities, as you know masks are not a mandatory requirement.’

The Chamber was at full capacity today despite a decision to recall Parliament from recess coming at the 11th hour, highlighting the outrage over the situation in Afghanistan.

As the desperate evacuation effort continues in Kabul, Mr Johnson defended his handling of the chaos insisting there was a ‘hard reality’ as a result of the US stance.

The PM told MPs that the ‘sacrifice’ of British troops was ‘seared into our national consciousness’. He said the ‘core mission’ had been achieved as Afghanistan had not been a hotbed for terrorism.

However, he was immediately assailed by Tories, with defence committee chair Tobias Ellwood saying the West had ‘ceded the country to the very insurgents we went to defeat’.

Theresa May said Afghanistan would now be a breeding ground for extremism, accusing the PM of operating ‘on a wing and a prayer’ and hoping it would be ‘alright on the night’. Former chief whip Mark Harper said there had been a ‘catastrophic failure’.

Labour leader Keir Starmer said the premier had displayed ‘staggering complacency’, pointing out that his last visit to Afghanistan as Foreign Secretary in 2018 had been a ploy to avoid a vote on Heathrow Airport expansion.

There were also calls for the government to go further and faster in providing safe haven for Afghans who face the threat of persecution under the new Taliban regime.

Labour’s Chris Bryant said only 5,000 of 20,000 refugees were set to be accepted this year, raging that the rest were being asked to ‘hang around and wait until they have been executed’.

On the current airlift, Mr Johnson revealed that just 306 UK nationals and 2,052 Afghan nationals had been extracted so far – with thousands more still waiting.

Meanwhile, other Tory MPs branded Mr Biden ‘shameful’, with former soldier Tom Tugendhat condemning the criticism of Afghans’ courage when the president has not seen service himself.

Opening a bruising emergency debate, Mr Johnson said: ‘The sacrifice in Afghanistan is seared into our national consciousness, with 150,000 people serving there from across the length and breadth of the United Kingdom – including a number of members on all sides of the House whose voices will be particularly important today.’

He added: ‘As for our Nato allies and allies around the world, when it came for us to look at the options that this country might have in view of the American decision to withdraw we came up against this hard reality.

‘That since 2009, America has deployed 98 per cent of all weapons released from Nato aircraft in Afghanistan and at the peak of the operation – where there were 132,000 troops on the ground – 90,000 of them were American.

‘The West could not continue this US-led mission, a mission conceived and executed in support of America… without US logistics, without US airpower, and without American might.’