‘The hardest year’: USA Bobsled carries on without Holcomb

PYEONGCHANG, South Korea (AP) – The memories are impossible to ignore. Justin Olsen sees him in the start house. Elana Meyers Taylor hears him on her track walks. Mentions of his name bring some members of the team to tears, and others still can’t fully open up about how difficult moving on has been.

USA Bobsled is not over it, not by any stretch of the imagination.

FILE – In this Friday, Dec. 16, 2016, file photo, driver Steven Holcomb, of the United States, talks with reporters in the finish area after winning the mens two-man bobsled World Cup race in Lake Placid, N.Y. It’s been nine months since Steven Holcomb died. The Americans will head to start house at the Alpensia Sliding Center on Sunday, Feb. 18, 2018, for the first bobsled races of these games and face the nearly impossible task of doing as well as he would have done. (AP Photo/Hans Pennink, File)

Holcomb was the best bobsledder in U.S. history, and he was supposed to be at these Pyeongchang Olympics for what likely would have been the final races of his career. Instead, the Americans will head to the start house at the Alpensia Sliding Center on Sunday for the first bobsled races of these games and face the nearly impossible task of doing as well as he would have done.

“It is very sad,” said Olsen, who now drives but was a push teammate of Holcomb’s when the U.S. won four-man gold in Vancouver eight years ago. “But it’s not going to be a crutch for this team.”

This season has been one struggle after another for the Americans. Nerves have been frayed all year. Results have been far from what the U.S. wanted or envisioned. Getting a third men’s sled to Pyeongchang was a challenge until the final possible moment, something that certainly would not have been the case if Holcomb was still driving.

The grieving process, they thought, would end at the memorial services that followed Holcomb’s death, or perhaps when they got back on the ice this fall.

They were wrong. It’s ongoing, with no end in sight.

“We’re all suffering together,” U.S. pilot Nick Cunningham said. “And the best way to honor that legacy is to carry it on, to always be that threat on the hill, always put in that work and honor him by what we’re doing behind the scenes. Because that’s how he was good, (it) was the work that he put into it away from the track.”

It is not lost on the Americans that Holcomb’s final race was in Pyeongchang.

The World Cup season ended on this track a year ago, the test event for these games. Holcomb spent time with just about everyone on the team during those few days in South Korea, sharing ideas with some, offering advice to others. He was both an athlete and a coach, the driver of USA-1 on the ice and a person who would try to groom others to eventually take that seat.

He left Pyeongchang last spring convinced that good things would happen at these Olympics. He had been to three Olympics, won three medals and felt the Americans were well on their way to winning more this year.

“You look at what we did, and I’m feeling pretty good about our chances for 2018,” he told The Associated Press after that World Cup ended.

Not even two months later, he was gone.

Holcomb died on May 6 in his room at the Olympic Training Center in Lake Placid, New York, with tests later revealing that he was intoxicated and had taken a sleeping aid on the night that he died. The training center is where USA Bobsled and Skeleton has offices and where athletes eat, sleep and train – so it’s impossible for members of those teams to set foot in that building and not be reminded of what happened.

Fogt got a reminder this fall of how influential Holcomb was on this team. Holcomb’s input was sought by those who make the ice at the Mount Van Hoevenberg track that the team calls home in Lake Placid. He’d look at the ice each fall, the way it coated every curve and tell the icemakers a little more here, a little less there.

It doesn’t seem like much, but that recommendation was invaluable.

“I crashed there this fall,” Fogt said. “Never crashed in Lake Placid before. Holcomb even made the ice better.”

Olympic rookie Sam McGuffie tells the story of how if it wasn’t for Holcomb, he probably wouldn’t be in Pyeongchang; Holcomb pulled him onto USA-1 a couple years ago, which means McGuffie got a stipend that made it possible for him to stay in sliding.

Steven Langton, the most decorated push athlete in U.S. Olympic history, says he still believes Holcomb was the best driver in the world.

Meyers Taylor, a gold-medal contender, knows he raised her game.

“One of my last track walks here was with him and we weren’t even talking about the track,” Meyers Taylor said. “We were talking about so many other things. We were both pretty comfortable, just talking and shooting the breeze. So I’ll always have that in my memory.”

Olsen, Cunningham and Olympic rookie Codie Bascue all are accomplished drivers. None of them can be Holcomb, and none of them is trying to be.

Here’s what they are doing: taking the lessons he taught, taking the example he set, and trying to apply that to their own driving and approach to these Olympics.

The way they see it, that’s the only appropriate tribute left.

“A year ago when we were here, we had four pilots here. And three of us are here now,” Olsen said. “But I think Steve lives on in a beneficial way in my life and it’s the same with the other pilots and the brakemen. And as he should. He was influential to everybody. There’s no sense in being sad. That’s not going to help. We’ve got to go on.” 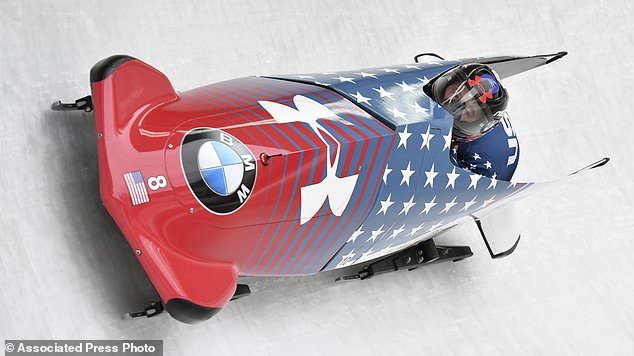 FILE – In this Feb. 4, 2017, file photo, Steven Holcomb and Samuel McGuffie of the United States speed down the track during the first run of the men’s two-man bobsled World Cup race in Igls, near Innsbruck, Austria. It’s been nine months since Holcomb died. USA Bobsled is not over it, not by any stretch of the imagination. (AP Photo/Kerstin Joensson, File)