People cutting meat out of their diets could be eating even more salt as vegetarians, experts say, as they reveal meat-free foods’ staggering salt content in a survey.

Many contain more salt than their meaty alternative and some even have higher levels of sodium than seawater.

A quarter of fake meat products have more salt than the maximum target they were supposed to have met by December 2017, the charity Action on Salt warns.

Eating too much salt can put strain on the blood vessels and heart, raising the risk of high blood pressure, heart attack, heart failure and stroke.

The worst offender is Tofurky’s Hickory Smoked Deli Slices, an alternative to sliced ham, of which a single portion contains more salt than two large portions of fries from McDonald’s. 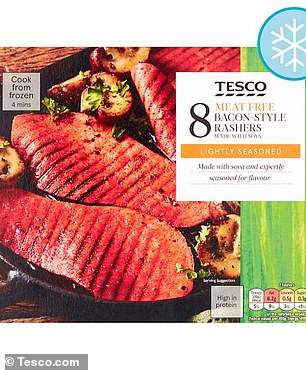 Tofurky’s Hickory Smoked Deli Slices and Tesco’s Meat Free Bacon Style Rashers are the worst offenders in Action on Salt’s research, with both containing three times more salt than a large portion of McDonald’s fries, and more salt than seawater from the Atlantic Ocean

The market for plant-based foods is growing as more and more Brits cut meat out of their diets for environmental, ethical or health reasons.

But Action on Salt warns many of these processed foods carry their own health risks because of the sometimes surprisingly high salt content.

Nutritionist at Action on Salt, Mhairi Brown, said: ‘Research has highlighted that we must reduce the amount of meat we eat to reduce the negative impact of climate change.

‘The food industry have ensured greater availability of meat-free alternatives, but now they must do more to ensure that meat free alternatives contain far less salt – at the very least lower than their meat equivalents.

The charity says many meat-free products, including the well-known Linda McCartney range, do not carry traffic light labels on the front, which would highlight and warn consumers about the the high salt levels in red.

Campaigners say the ‘health halo’ surrounding the meat alternatives is not a fair representation of what they really contain.

Their survey found the saltiest of the products – Tofurky’s Hickory Smoked Deli Slices and Tesco’s Meat Free Bacon Style Rashers – both contain much more salt per 100g than seawater.

Water from the Atlantic ocean contains the equivalent to 2.5g of salt per 100g, they said, while the Tofurky slices had 3.5g and Tesco’s meat-free bacon has 3.2g.

And the salt content in an average meat-free burger was 0.89g per portion, which is higher than the 0.75g found in a real supermarket beefburger.

Of the product types, meat-free bacon has the highest average salt content per 100g across the 157 products surveyed, with 2.03g.

Meat-free sliced meat came second with an average of 1.56g of salt per 100g.

Looking at the figures on a per portion basis, vegetarian kievs were the saltiest at 1.03g, which is higher than in a large portion of McDonald’s fries, which has 0.82g.

A portion of meat-free sausages came in at 0.96g and even plain meat-free pieces and fillets, which can be turned into a range of dishes, were 0.87g.

SALT DAMAGES THE BODY AND RAISES THE RISK OF EARLY DEATH

Salt damages the heart and blood vessels and the brain by affecting how well the body distributes water and other fluids.

The balance of fluids and sodium in the body is crucial to homeostasis, which keeps systems operating in sync.

When there is too much sodium in our systems, our bodies retain excess fluid to try to balance out the salt.

Cells which are swollen up with retained water mean the volume of blood becomes higher so the heart has to work harder to pump it, leading to higher blood pressure.

High blood pressure, in turn, raises the risk of stroke and heart disease.

Higher blood pressure also makes it more difficult for the heart to push oxygen-carrying blood to various organs, including the brain, which can lead to cognitive decline.

Some 32 of the products had no front of pack colour-coded labelling.

And around one in five of the products had no recommended portion size, making it hard for consumers to gauge their daily salt intake.

The campaigners said that just three of all the products surveyed were low in salt, which means they had 0.3g per 100g or less.

Chairman of Action on Salt, Professor Graham MacGregor from Queen Mary University of London, said: ‘Reducing salt is the most cost-effective measure to reduce the number of people dying or suffering from entirely unnecessary strokes and heart disease.

‘Given the vast amounts of strokes and heart disease that could be avoided and huge savings to the NHS, it is incomprehensible that Public Health England are not doing more to reduce the amount of salt in our food.

‘We are again calling on PHE to take urgent action.’

The UK’s salt reduction programme, devised by Action on Salt and the Food Standards Agency, has slowly lowered the amount of salt added to foods.

It is estimated that every 1g reduction in the nation’s average salt intake prevents 7,000 deaths a year from strokes and heart disease.

The NHS could also save an estimated at £1.5billion a year.

The health service recommends adults don’t eat more than 6g of salt per day, and children should eat even less.

Yet a veggie burger contain more salt – 0.89g – than a meat one – 0.75g and was saltier than Salt and Vinegar flavour Pringles.