A fireman saved nine people from Grenfell Tower, it emerged yesterday – as he told for the first time of the terrifying scenes inside the burning building.

Aldo Diana, 55, carried one survivor down at least 13 floors but insisted modestly he was not a hero, saying: ‘I was doing a job to save lives, and I saved lives that night as best I could.’

He told how he and his colleagues stumbled over the bodies of residents where they had collapsed in the smoke-filled stairwell during their desperate attempts to escape.

Fireman Aldo Diana, 55, saved nine people from Grenfell Tower, as he told for the first time of the terrifying scenes inside the burning building

The fire crew manager, who was only four months away from retirement, braved choking smoke and intense temperatures to go back into the tower block again and again for seven hours.

Out of the 65 who were rescued, Mr Diana helped to bring out nine, and he spoke of his experiences for an ITV documentary filmed to mark the first anniversary of the deadly blaze last June, which killed 72 people.

Mr Diana and his four-strong crew were scrambled from Battersea fire station in South London at 2.15am, more than an hour after the first 999 calls at 12.54am.

He and a colleague were told to try to get to one of the highest floors in the 24-storey tower, and found water pouring down the only stairwell, where residents were trying to escape.

The two firemen – each wearing breathing apparatus weighing more than 50lb – led six residents to safety, and carried out another survivor they found during five separate attempts to reach the highest floors. 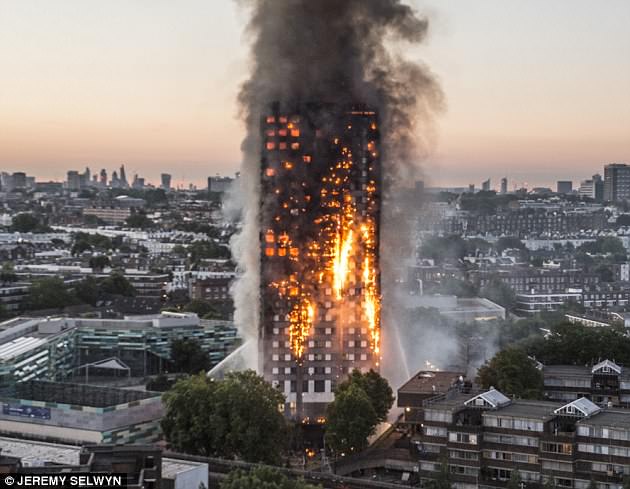 Mr Diana told Radio Times: ‘On our last journey we were more than halfway up the tower, and it was pitch black with smoke. I was quite exhausted by now.

‘I stepped over what I thought was a hose, and then there was a cough, and only because of that sound we made out two adults collapsed on the floor. We weren’t sure they were both alive.

‘The breathing apparatus meant we couldn’t carry them over our shoulders, so we each carried one in our arms.

‘It was very hard, down many flights of stairs, in the dark, when we were almost out of oxygen. You find it in yourself to do it. We got them out.’

Mr Diana, who has since retired after a 26-year career in the fire service, added: ‘When I signed up, I knew there would be harrowing times.

But I don’t like the word hero. It’s just the job we do.’ London Fire Brigade has faced criticism from survivors and bereaved families for its ‘stay put’ policy, which meant 999 operators told families to stay in their flats and wait to be rescued.

‘Frontline firemen have been banned from talking about the policy because of the public inquiry and police investigation.

Mr Diana, who lives in Kent with his wife Dawn, said he saw victims’ bodies in the stairwell and in flats, and he left the Grenfell site only at 9.30am.

He said he wanted the public inquiry and the investigation to be completed, but warned he did not believe politicians would learn lessons from the tragedy.

He said: ‘I can’t stand the politics side of it – people saying, “We’ll learn from this.” They always say it, and they never do. They never learn, and it happens again.’

Mental health charities have warned that firemen, police officers and 999 operators involved in the Grenfell rescue are likely to suffer flashbacks and post-traumatic stress.

Mr Diana said he had ‘a couple of sleepless nights’ but had refused counselling. He said: ‘Some of my colleagues were affected, but I don’t feel what they felt. I could deal with it myself.

‘I lost my rag with a couple of people at work. My guv’nor told me the arguments were so out of character I needed counselling. He said I was suffering because of Grenfell. But I don’t think it’s affected me.’