This is the horrifying moment when a father-of-two broke his neck after jumping into a children’s pool in a bucks party gone wrong.

Tim Cornthwaite, 29, from Queensland’s Sunshine Coast, cracked his vertebrae after diving head first into a children’s inflatable as part of a bungee jumping prank during his bucks party.

Mr Cornthwaite was wearing a dress and was blindfolded when his friends lifted him up onto a wooden picnic table in his Gold Coast home, which they pretended was a bungee jumping platform last weekend.

Mr Cornthwaite was wearing a dress and was blindfolded when his friends lifted him up onto a wooden picnic table in his Gold Coast home, which they pretended was a bungee jumping platform last weekend 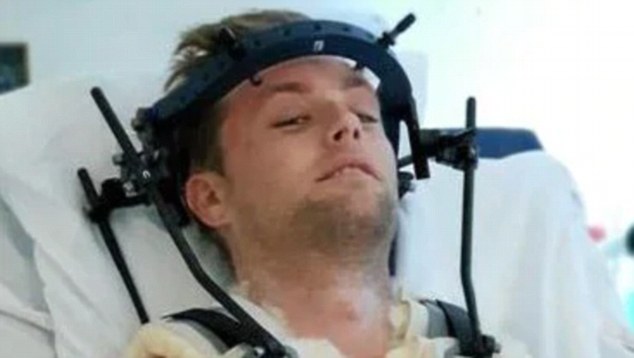 ‘It’s no one’s fault, no one’s to blame, I’m not angry with anyone. It’s just a freak accident,’ he said.

‘When I landed from my shoulder blades up, I just went instantly stiff.’

After Mr Cornthwaite had an x-ray, he was told ‘you’ve broken your neck, you can’t move’.

The groom thought he had signed a waiver and heard a safety briefing he believed to be true, with a harness wrapped around his legs.

He then plunged head first into the shallow water leading to his severe injury.

Mr Cornthwaite’s sudden fracture meant he could have been paralysed from one sneeze, Seven News reported. 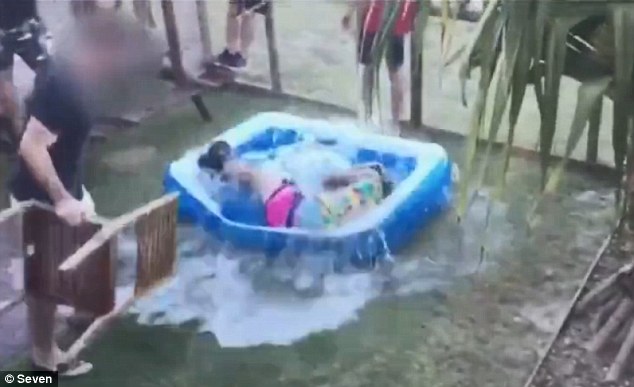 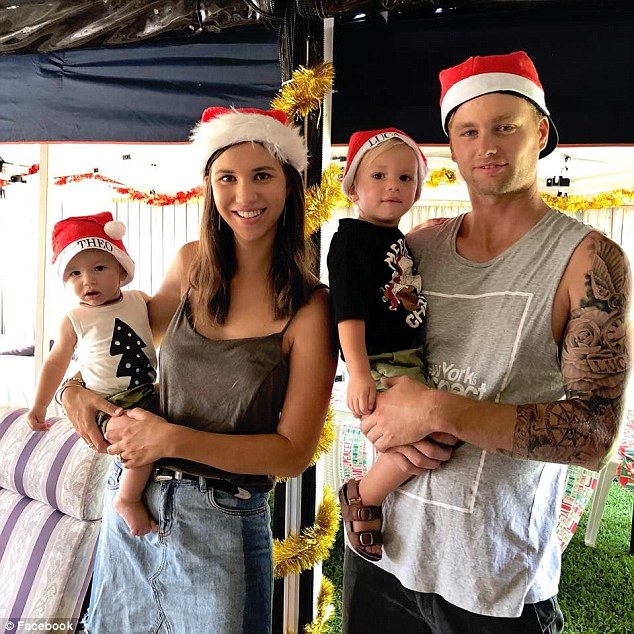 The groom will be wearing a neck brace when he gets married on Saturday following the near-tragic accident.

His fiancee Chloe Zammit told Daily Mail Australia on Friday it had been a tough week but assured the wedding will still go ahead.

Mr Cornthwaite complained of soreness at the time of the accident but had no idea of the seriousness of the injury until Tuesday following a CAT scan and overnight stay in hospital.

He was then transferred to Royal Brisbane and Women’s Hospital, where he spent several nights before he returned home on Thursday night. 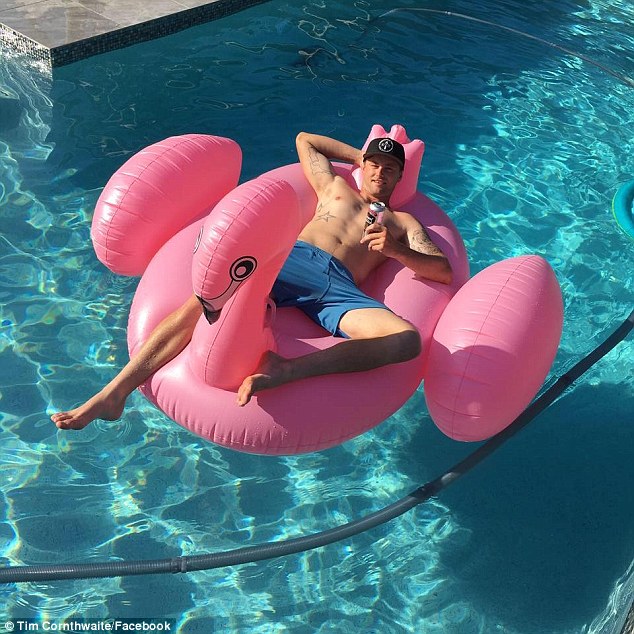 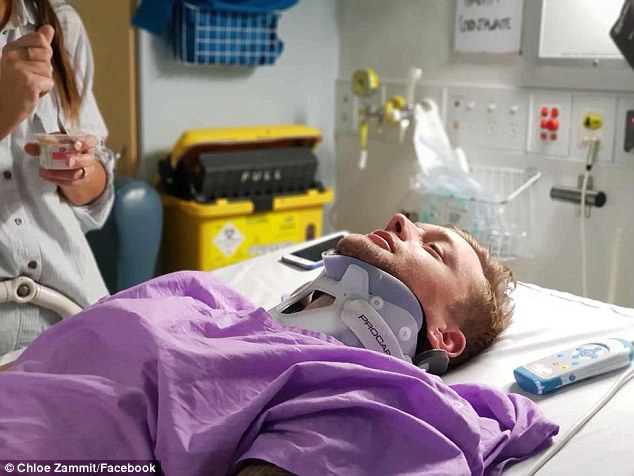 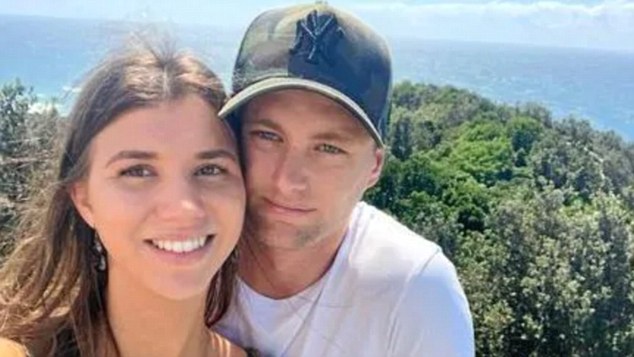 Mr Cornthwaite will still marry his partner Chloe Zammit this Saturday. ‘Tim would not take no for an answer,’ Ms Zammit told Daily Mail Australia 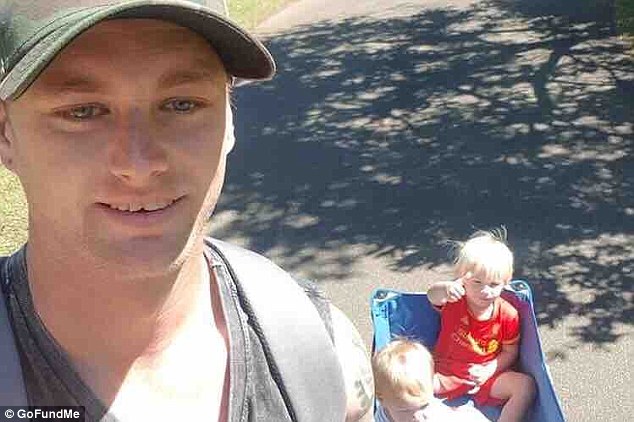 Mr Cornthwaite is a devoted dad to Luca, 3, and Theo, one-and-a-half

‘It’s been a big shock as he just thought it was a stiff neck. The news got worse and worse with each person we saw. It’s changed our outlook on life and made us realise  what’s important and just how lucky we are. It could have been so much worse.’

She isn’t angry about the prank that could have killed her husband-to-be.

‘At the end of the day, it doesn’t really matter,’ Ms Zammit said.

Ms Zammit said her fiance insisted that their long-awaited vows still go ahead this Saturday in front of almost 100 guests at a chapel on the Sunshine Coast hinterland.

But they will delay the reception by six months to hopefully coincide with Tim’s 30th birthday party.

The couple have been together for six years and have two sons – Luca, 3, and Theo, one-and-a-half.

‘Tim would not take no for an answer,’ Ms Zammit told Daily Mail Australia.

‘We didn’t make the final decision until the last minute. He wanted the reception to go ahead as well. We compromised and put off the reception as I don’t think he would have enjoyed it as much if we had it on Saturday.’ 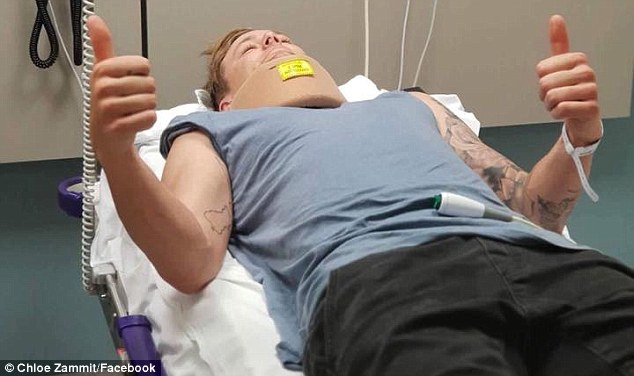 Tim Cornthwaite (pictured) remains in good spirits. He has since had a halo brace installed

Mr Cornthwaite now has a long road to recovery ahead of him.

It’s unknown whether the talented soccer goalkeeper will ever play again and the family will have no income while Mr Cornthwaite is off work, who has to wear the halo brace for the next three-to-six months.

Ms Zammit has also had to give up work to look after him.

‘Tim needs me 24-7, so we’re going to be spending a lot of quality time together,’ she told Daily Mail Australia.

A GoFundMe page set up by friend Matt Enticknap to help the young family has already raised more than $9,000 within three days.

There are also plans to hold a charity soccer match to help raise funds. 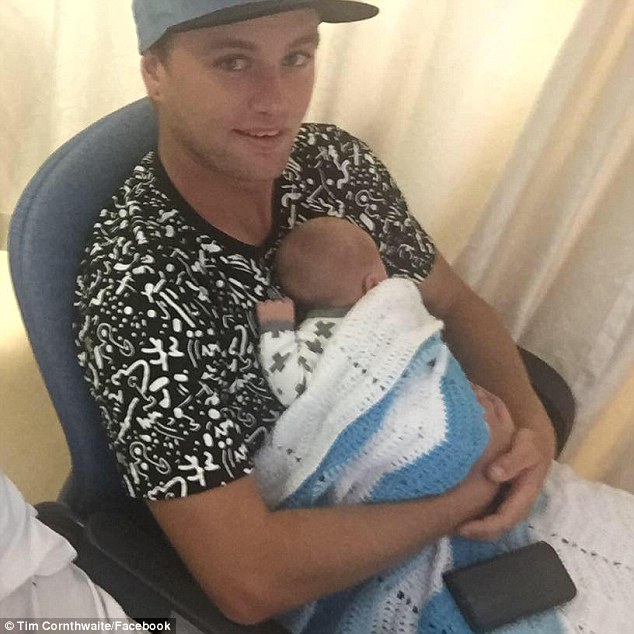 The Queensland tradie is also a talented soccer goalkeeper 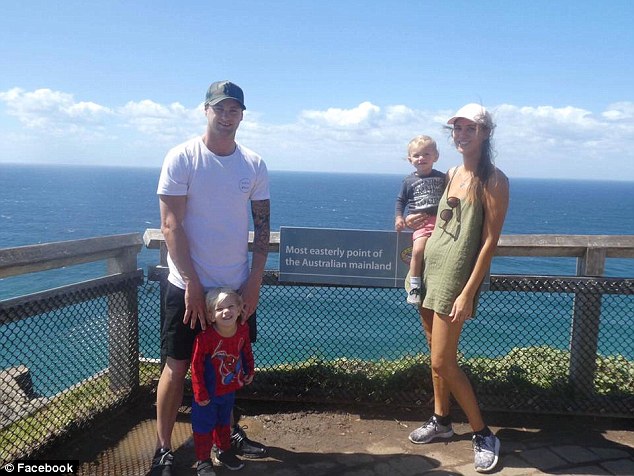 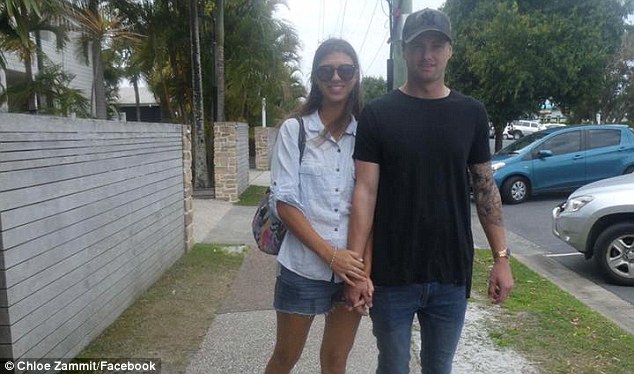 The couple (pictured), who have two boys under the age of three, have a uncertain six months ahead of them

‘Tim had his bucks party on the weekend and after going to the physio on Monday to get his neck looked at he found out he has multiple fractures in his vertabrae and now has to wear a halo neck brace that they drill into his skull for 3-6 months,’ Mr Enticknap posted on the page.

‘Him and the fiancée are in good spirits and see the funny side as they are two of the most down to earth, selfless people you’ll meet. Any help at all would go a long way in getting them through a pretty challenging time in their lives.’

Ms Zammit has since taken to social media to thank everyone for their support.

‘We are so overwhelmed with support, offerings of help and kind words,’ she wrote.

‘Tim is doing well, has been in and out of it since getting the halo fitted yesterday. But we are on the first step of the road to recovery now. He is already feeling all the love and we are so grateful for everyone around us.’

Ms Zammit told Daily Mail Australia: ‘The support we’ve received has been overwhelming. A lot of people are very excited to see us get married on Saturday.’