The Duke and Duchess of Sussex are set to build a new life for themselves in Canada, which means Meghan could soon be heading back to many of her favourite haunts.

Meghan, 38, spent seven years living in Toronto while filming US legal drama Suits before moving to the UK to be with Prince Harry, 35, and the couple could now make the city their Canadian home.

The couple both have close ties to the city – and plenty of fond memories – having spent much of the early days of their relationship criss-crossing between Toronto and Harry’s Kensington Palace home.

Meghan, 38, spent seven years living in Toronto while filming US legal drama Suits before moving to the UK to be with Prince Harry, 35, and the couple could now make the city their Canadian home. Pictured, Harry and Meghan at Canada House, London, earlier this month

Meghan’s best friend, Jessica Mulroney, lives in Toronto and she and Harry even chose made their first official outing as a couple in the city, stepping out together at the Invictus Games in September 2017.

All this has led some, including Vanity Fair, to speculate that the Sussexes could move to the city on a more permanent basis. The other option is Vancouver, or nearby Vancouver Island, where Meghan and Archie are currently staying in the multi-million dollar bolthole that the family has been using since before Christmas.

Prince Harry is thought to be flying out shortly to reunite with his wife and son after two weeks apart.

If the Sussexes do choose Toronto, it would give Meghan the opportunity to revisit some of her old hotspots, including the local Soho House and the yoga studio where she once ‘trolled for girlfriends’.

Here, a closer look at what the city could hold for them…

NIGHTS OUT AT SOHO HOUSE 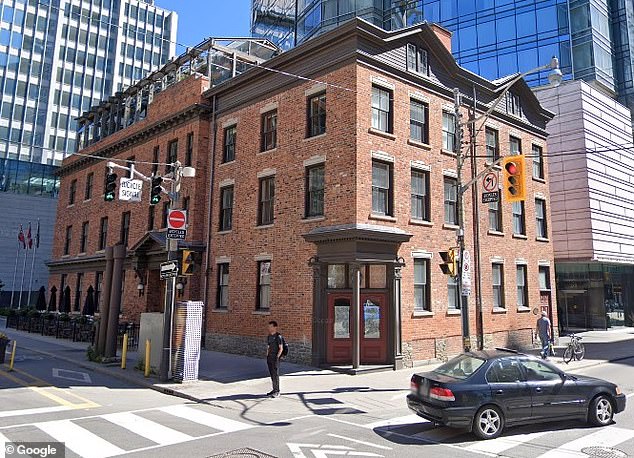 Date nights: The couple are rumoured to have had their first date in the London Soho House back in 2016 and attended the opening of the Amsterdam outpost in 2018, so date nights at the Toronto Soho House, pictured, could be on the cards

Their new roles mean Prince Harry and Meghan Markle should be able to enjoy more low-key nights out together – and the local Soho House is likely to be high on their list.

The couple are rumoured to have had their first date in the London clubhouse back in 2016 and more recently visited the opening of the Amsterdam outpost in 2018, so date nights at the Toronto Soho House could be on the cards.

Indeed, they love Soho House so much that they even hired the chain’s former designer to head up the interiors work at Frogmore House, their home on the Windsor estate.

And if they’re worried about their visits being kept secret, they can always call on Markus Anderson, a close friend of Meghan’s and a consultant at Soho House, for that extra exclusive, VIP treatment.

YOGA CLASSES AT A DOWNTOWN STUDIO 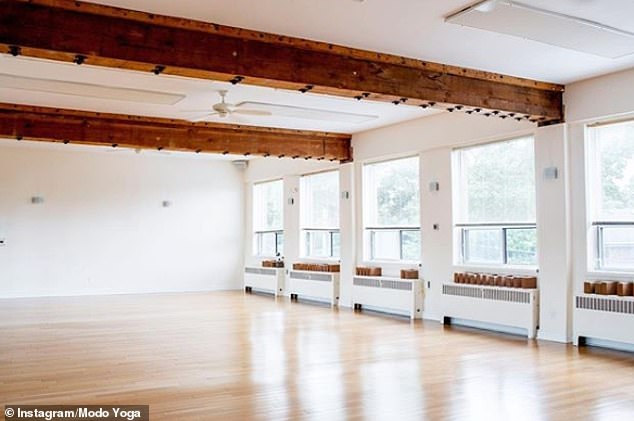 Favourite hobby: Meghan inherited her love of yoga from her mother Doria and is almost certain to seek out a studio wherever she puts down roots. The Duchess could return to Modo studios, pictured, formally known as Moksha, which she frequented back in her Suits days

Meghan inherited her love of yoga from her mother Doria, who teaches in Los Angeles, and is almost certain to seek out a studio wherever she puts down roots.

The Duchess could return to Modo studios, formally known as Moksha, which she frequented back in her Suits days.

Speaking to the Toronto Sun in 2016, the actress said: ‘When I first got here, Suits wasn’t aired in Canada for the first two years. I was going to Moksha downtown and trolling for girlfriends.’

The Duchess is still found of the chain and was spotted attending a Modo yoga class in New York during her whirlwind visit to watch Serena Williams in the US Open last year. There are several locations dotted across Toronto, giving Meghan plenty of choice.

DOG WALKS IN THE PARK 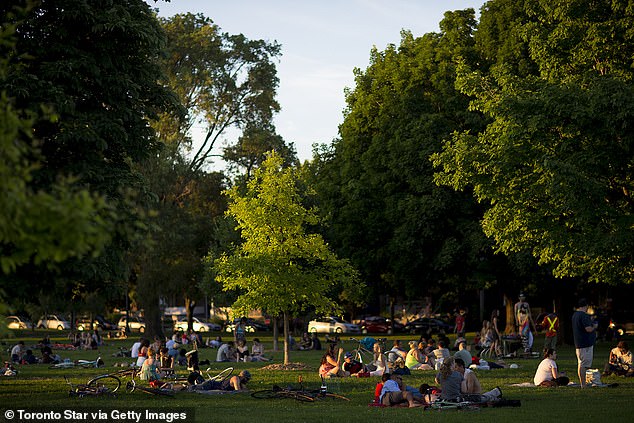 Family day out: Meghan used to walk her dogs, Bogart and Guy, at the city’s popular Trinity Bellwoods Park (pictured in file image) and it could soon be a place for her, Harry and Archie to unwind. The family are thought to have as many as three dogs between them

Both Harry and Meghan are well-known dog lovers and are thought to own as many as three between them.

Meghan owned a Bogart, Labrador-shepherd mix, and Guy, a Beagle, when she lived in Toronto and frequently described them as ‘my boys’ and ‘my loves’ on her Instagram account.

Her favourite dog walking spot was the city’s Trinity Bellwoods Park – and it could soon become a go-to for her, Harry and Archie.

When she moved to the UK, only Guy made the journey as Bogart was too old to travel. It is thought he was given to friends to look after.

Harry and Meghan are then thought to have gotten a black Labrador together, although a name has never been confirmed. Both Guy and the Labrador are understood to have been flown to Canada before Christmas. 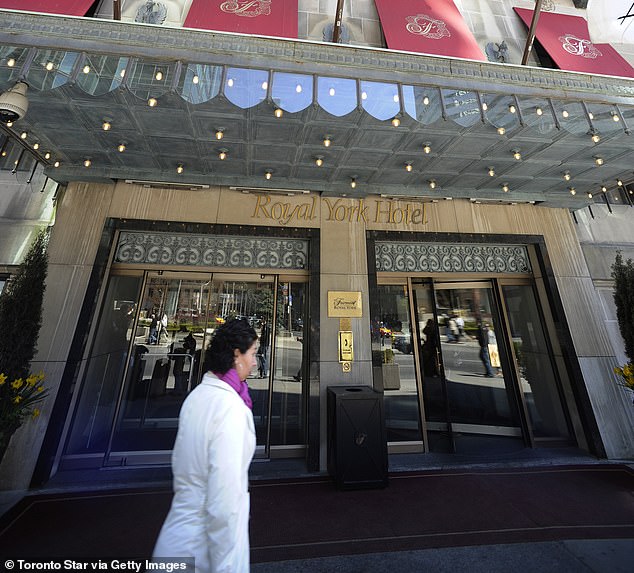 Royal seal of approval: Prince Harry stayed in a suite at the Royal York Hotel, pictured, while visiting the city for the Invictus Games in September 2017. It could be perfect for staycations

While it is likely any house Harry and Meghan choose will have plenty of space for guests, the couple could always rent out a room – or suite – in the Royal York Hotel if they wanted to treat their loved ones to a little bit of luxury.

The Royal York is one of Canada’s leading hotels and already has the royal seal of approval after Prince Harry stayed in a suite while visiting the city for the Invictus Games in September 2017.

It is not known which suite he occupied but the Royal Suite – which would have certainly been appropriate – has a bar, fireplace and 16-seater dining room.

Meghan spent time with her then boyfriend at the hotel during the trip, which also saw their first official public outing as a couple.

BEAUTY TREATMENTS AT A LOCAL CLINIC 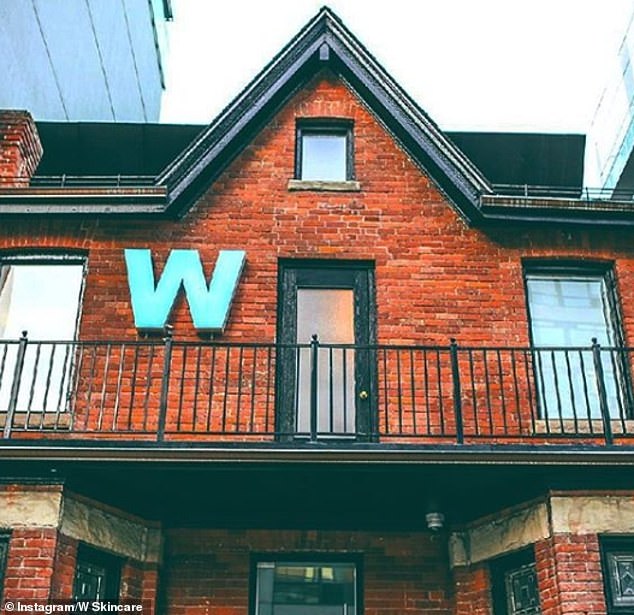 Firm favourite: Meghan Markle used to visit Toronto’s W Skincare, pictured in an Instagram snap, while filming Suits. She might seek out her favourite treatments on her return

Like many busy women on the go, it was important for Meghan to find a convenient spa while living in Toronto – and W Skincare was just the spot.

Located just a stone’s throw from where she used to film Suits, W Skincare offers a range of treatments including clinical peels, cold lasers and microdermabrasion.

The clinic’s director, Jeff Eltom, has previously described Meghan as ‘Very down to earth, exceedingly polite and genuine with everyone’.

One of her favourite treatments was their signature cold laser therapy which is a non-invasive treatment designed to replenish the skin’s natural moisture barrier and reduce the appearance of fine lines.