The huge problems engulfing Ligue 1 after the season was cancelled

The decision to cancel the Ligue 1 season is threatening to cause chaos in French football, with unhappy clubs considering legal action and a financial crisis looming.

On Tuesday, French prime minister Edouard Philippe announced football games – even behind closed doors – will not be allowed before September.

It led to table-toppers PSG being crowned champions, Marseille and Rennes being handed Champions League spots and Amiens and Toulouse suffering relegation, based on a points-per-game performance index.

But while some clubs will be happy with the final league table, others have been left feeling like they’ve been robbed of the chance of both success and prize money.

Lyon claim they will be denied ‘tens of millions of Euros’ after missing out on a European place as it stands, while Lille, who have been put into the Europa League, can feel aggrieved that they won’t get the chance to finish in the top three.

On top of the issues surrounding league positions and lost income, Ligue 1 are also facing a nightmare situation with their TV broadcast deal.

Here, Sportsmail looks at the major problems which have emerged in French football since the Ligue 1 campaign was brought to a premature end.

THE THREAT OF LEGAL ACTION

‘If they want to go to court, let them go,’ Maracineanu told RMC Sport.

‘The sports movement is autonomous… this is valid for professional sport and amateur sport alike. In this situation, there are some who are content and some who are dissatisfied.

‘I appeal to everyone’s solidarity and responsibility. I appeal to the wealthy and better off that they don’t split hairs… we must also think of others and society. The world must know how to take its losses.’ 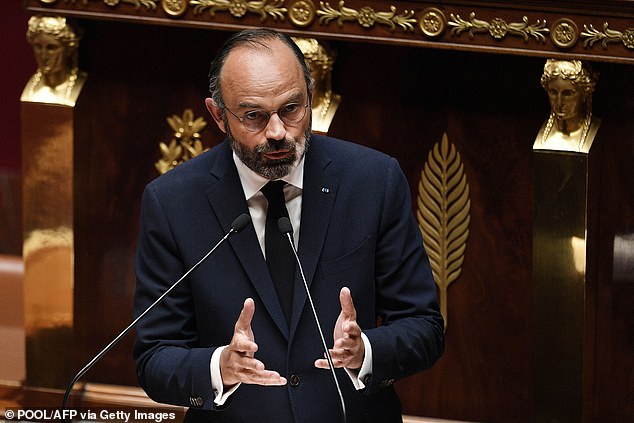 Among the clubs considering their options are Amiens, who were one of two clubs, along with Toulouse, demoted to Ligue 2 after being placed 19th in the final table.

‘It is an injustice because Amiens could not defend until the end on the pitch to remain in Ligue 1,’ the club’s president, Bernard Joannin, said in a Facebook Live broadcast.

‘I’ll fight with all the teams to assert our right, because I think this decision isn’t right. We will wait for the minutes of the LFP board of directors.

‘There will be the passage to the general assembly, and we reserve the right to go further so that justice passes.’

Lille are another side unhappy with how the table has been decided, having missed out on a Champions League spot despite being just a point behind third-placed Rennes.

Club president Gerard Lopez told L’Equipe: ‘In my opinion, freezing the season is just unacceptable. We have studied the question and found that 71 per cent of the teams have changed places over the last 10 games, so hence the idea of ​​a simulation.

‘The freeze does not take into account who played against who, at home or away, and at what time of the season. We have played twice against Paris (for two losses), while Rennes, who are one point behind in the league, have only played them once. Is that fair?

‘We can imagine a more scientific calculation model in which we would simulate the results of the last ten games, according to the points taken at home or away this season, to obtain a ranking after 38 games.’

With a number of clubs considering launching legal action focused on a loss of income, Ligue 1 – and potentially the French government – could be facing huge payouts if the aggrieved clubs are successful in court. 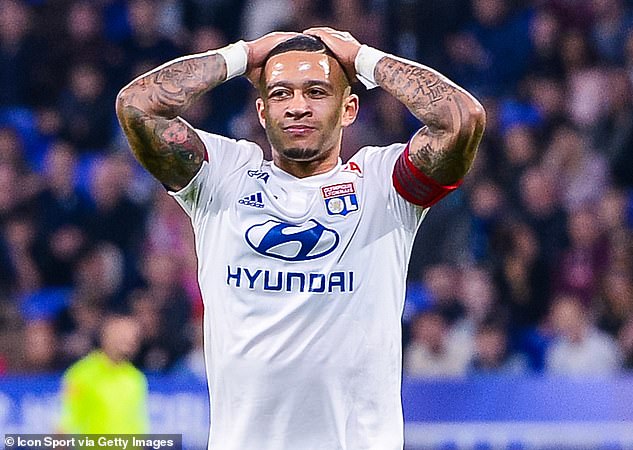 The strongest legal threat to Ligue 1 could come from Lyon (pictured, Memphis Depay)

Perhaps the strongest legal threat to Ligue 1 could come from Lyon, who have been left raging by the decision not to complete the season behind closed doors.

The French giants say they are considering seeking damages after finishing seventh in the table and missing out on both the Champions League and Europa League as it stands. They could still reach the latter if their Coupe de la Ligue final against PSG goes ahead and they beat Thomas Tuchel’s men.

In a statement on Thursday, Lyon said: ‘Given the judgment of the French Ligue 1 Championship, decreed today by the League, Olympique Lyonnais reserves the right to appeal against this decision and claim damages, in particular under the loss of chance and in light of the jurisprudence of other professional sports which are currently in progress, since the damage for the club amounts to several tens of millions of euros.’

Lyon also pointed out that they had lobbied for a fairer way of determining the final standings – possibly using a play-off system that would allow teams to win their spots in the table ‘based on sporting merit’.

They added: ‘Olympique Lyonnais proposed as early as Tuesday that the League study an alternative solution which would allow the Championship to be ended and thus preserve the fairness inherent in any sporting competition and to be in line with UEFA’s proposals based on sporting merit according to objective, transparent and non-discriminatory principles.

‘This solution shared by other clubs was based on the principle of play-offs, a title of champion acquired by PSG, with a calendar limited to three weeks, consistent with health constraints, and an innovative formula which normally could have interested broadcasters, currently lacking content, as well as sports betting and all other economic players in the football industry.’

After ignoring Lyon’s suggestions, Ligue 1 can expect to hear more from outspoken president Jean-Michel Aulas in the coming weeks. 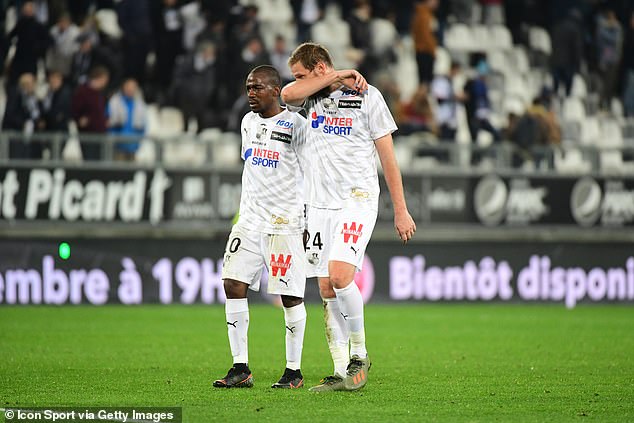 Among the clubs considering their options are Amiens, one of two relegated to Ligue 2

UEFA are facing the prospect of another huge Champions League headache after the French government banned all sporting events until at least September.

With PSG and Lyon still involved in the competition and UEFA planning to complete it during the month of August, the move means that both clubs will be unable to play any fixtures on home soil going forward.

PSG are through to the quarter-finals after coming from behind to knock out Borussia Dortmund in the last-16, while Lyon still have the second leg of their tie with Juventus to play after football was shut down due to the coronavirus crisis.

The French champions have since confirmed that they will play the home leg of their quarter-final tie – and any other knockout games due to be held at the Parc des Princes – outside of France. Lyon are certain to do the same if they get past Juve.

Another potential issue for PSG is their involvement in both the Coupe de France and Coupe de la Ligue finals.

UEFA delayed the return of both the Champions League and Europa League in order to give Europe’s top leagues the opportunity to finish their domestic seasons by the end of July.

However, Ligue 1 chief Didier Quillot is hopeful that both of France’s domestic cup finals can be scheduled behind closed doors in August in order to decide the winners and the final Europa League entrants.

If Neymar and Co were to make it through to the Champions League final, it could leave them facing the prospect of five huge European ties and two cup finals in a month.

The cancellation of Ligue 1 also means that both PSG and Lyon may go into their European quarter-final having not played a competitive game in months. 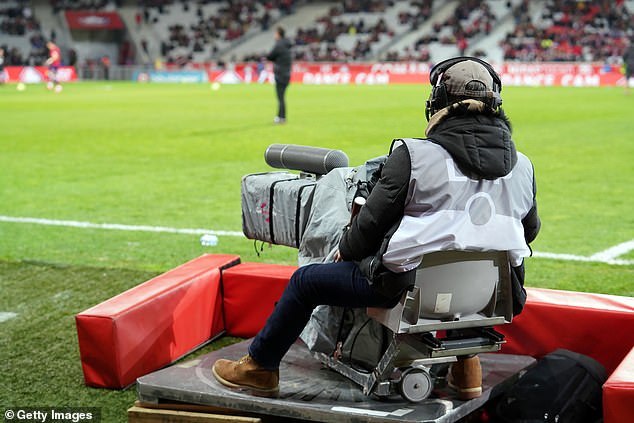 Ligue 1 has asked the government for a whopping £173million loan to prevent clubs going bust after it was revealed as many as 17 are in danger of folding due to the cancellation of the season.

Domestic broadcaster Canal+ has terminated its TV contract for the season, while beIN Sports has frozen payments since the league was suspended in March.

It leaves teams trying to fill a financial black hole of £211m, with the majority of the division in real danger of financial ruin.

Some of the biggest clubs in France, including Marseille, Lille and Saint Etienne, are all facing monetary woes as a result of broadcasters pulling the plug.

Paris Saint-Germain, Monaco and Lyon are the only three clubs believed to be in a position to deal with the losses, although all three have been putting pressure on their playing squads to accept either wage cuts or deferrals.

The government has agreed to guarantee up to 90 per cent of the loans being sought by the league, according to one club director.

Bernard Caizzo – the joint owner of Saint-Etienne is leading the clubs in discussions over how to handle the current predicament, and revealed that, with the government help, they are looking for a loan of €200m (£173m) to fill the void left by the lost broadcast revenue.

Clubs may also receive relief in the form of the 40 per cent tax on player wages being waived, while they can also agree to a 70 per cent wage deferral for players, according to the New York Times.