The diplomatic efforts needed to transport a frisky stallion given to John Major by the effusive President of Turkmenistan have attained a legendary status on Whitehall.

The thoroughbred Akhal-Teke steppe horse, named Maksat, was given to the PM by eccentric Turkmen President Saparmurat Niyazov as a personal gift in 1993.

The entire saga is related in a trove of files newly released by the National Archives.

The first stage of its journey took it to Moscow by train, accompanied by a team of grooms who had no cash, but only ‘legendary’ Turkmen melons to barter with.

A memo outlining the absurd events was penned by diplomat Laura Brady, who was tasked with securing Maksat’s onward carriage – during the chaos of a Moscow uprising that killed hundreds.

Ms Brady began her account at the station: ‘We explained our mission, pleading the case of two poor Turkmen horses that had been standing up in a railway carriage for four and a half days.

‘This elicited in response the sad tale of the Finnish Ambassador’s parrot, the only other living thing that had fallen into the hands of the Twelfth Diplomatic Customs Post during her memory.’

‘The receptionist, an animal lover and close to tears at the thought of the parrot, relented and led us through a maze of ceiling-high packing cases in the enormous warehouse.’ 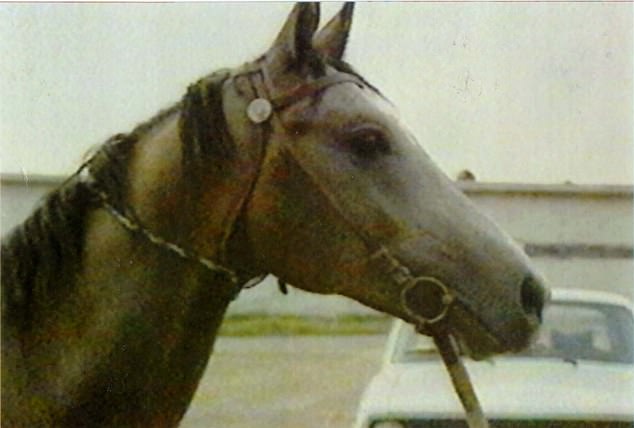 The thoroughbred Akhal-Teke steppe horse, named Maksat, (pictured) was given to the PM by eccentric Turkmen President Saparmurat Niyazov as a personal gift in 1993

After extended negotiations, it seemed the Russian bureaucracy was ready to let the two horses proceed – the other being bound for Francois Mitterrand.

As they prepared to release the horses, ‘out of the railway carriage the three grooms, who had travelled with the horses, began to carry countless sacks of potatoes, onions, carrots and at least 200 large yellow melons.

‘One groom explained that as Turkmenistan had no post 1992 banknotes, they were forced to bring wares to sell in Moscow to be able to buy the return ticket to Ashkhabad.

‘The groom also told me how they had lost some of the melons when armed bandits had broken into their carriage at a rural station in Kazakhstan.’

The horses were finally taken to quarantine. ‘I have made some useful contacts over the last few days, so the next time we want to import a horse to Russia it will be a doddle’, Ms Brady ended. 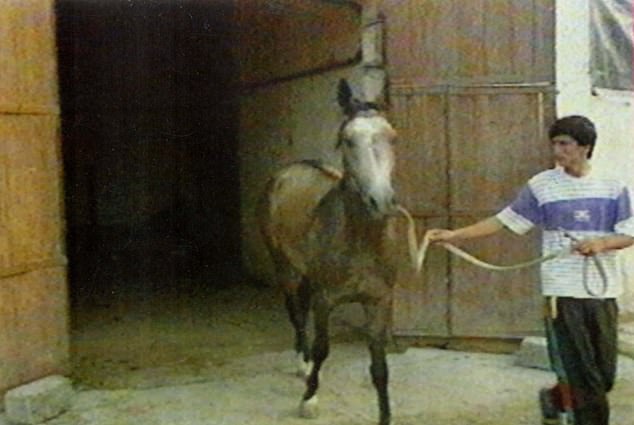 A memo outlining the absurd events was penned by diplomat Laura Brady, who was tasked with securing Maksat’s onward carriage – during the chaos of a Moscow uprising

Her wry account of the incident brought praise from the very top.

Major himself wrote her the memo was ‘the most enjoyable document the Private Office have put into my weekend box in a very long time’, new documents show.

‘Had I solicited this gift, I would have been embarrassed at the trouble it has caused.

‘But, as you know, there are important reasons of State ensuring the safe transit of Maksat to his eventual home with Household Cavalry.’

Commenting on the affair in 2012, Major said he ‘didn’t think Norma would have fancied stables in the garden’.

Unknown until now, the new documents also underline the less than serious attitude taken amongst aides inside No 10 to this storied equine odyssey.

Major’s Private Secretary Rod Lyne, for instance, glossed a letter with the following handwritten note: ‘Prime Minister, This is a wonderful story – worthy of Gogol. The family might enjoy it.

‘You will have to visit the nag when it arrives next year’, he concluded emphatically.

However as delays to the horse’s arrival continued, other aides began to wonder: ‘When will it arrive and when can we forget the whole saga?

The horse also attracted some negative publicity, when it emerged the British horseman who had won the contract to transport the horse to the UK was a convicted fraudster.

However, the horse was considered too unmanageable for its intended career with the Household Cavalry, but did later find success in endurance events, stabled happily in Wales.