The amazing winning and shortlisted images from the 2019 Travel Photographer of the Year competition have been revealed – and they are guaranteed to enchant, fascinate, and prompt the jaw to generally drop.

Photographers from 144 countries submitted over 20,000 stunning pictures in categories including endangered planet, people and cultures, thrills and adventures and dusk to dawn.

With a portfolio of ‘atmospheric and diverse’ black-and-white images captured around the globe, amateur photographer Katy Gomez Catalina, from Spain, scoops the top prize and the title of Travel Photographer of the Year 2019.

Young Travel Photographer of the Year 2019 is 11-year-old Indigo Larmour – one of the youngest-ever entrants to take the crown. The youngster, who is Irish, won over the international panel of judges with the images she snapped during travels across India.

Other amazing podium pictures include an incredible shot of crabeater seals resting on broken ice in Antarctica, a fascinating photo of a band of wild stallions in the Utah desert and a mesmerising image of the biggest waterfall in the Faroe Islands.

The winning images can be seen at the Travel Photographer of the Year exhibition at London’s Coal Drops Yard from April 7 to May 12, 2020. They will also be on show at Chester Cathedral in June and at the Xposure International Photography Festival in Sharjah in the UAE in September. MailOnline Travel has kindly been granted permission to publish a stunning selection of the 177 winning and shortlisted images. Scroll down to see our picks of the bunch…

This dramatic shot shows Lake Gosaikunda, a high mountain lake in the Himalayas, underneath the Milky Way. It was captured by Ukrainian photographer Yevhen Samuchenko, the runner up in the dusk to dawn category’s portfolio prize 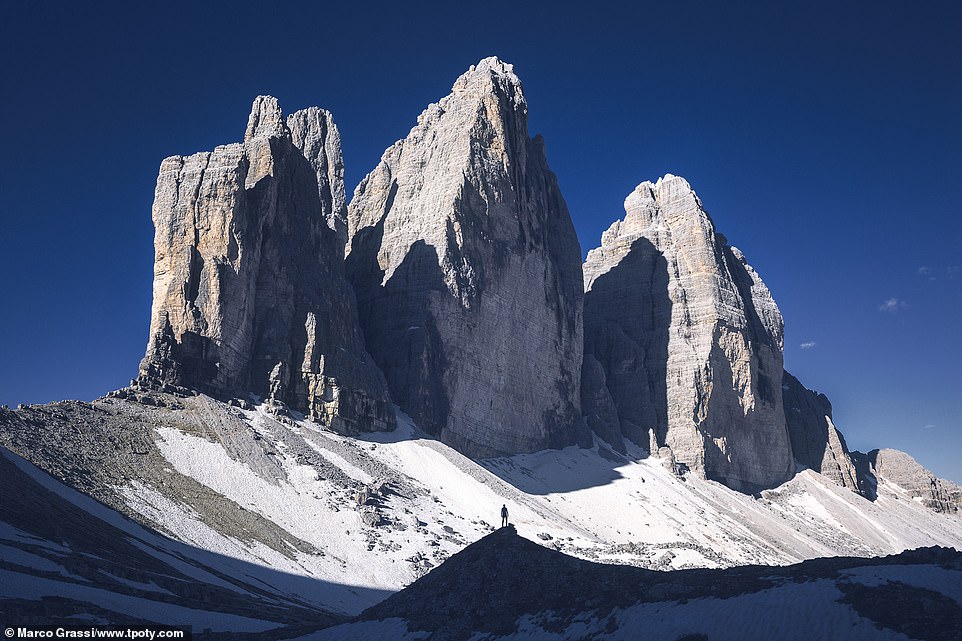 Italian photographer Marco Grassi is commended in the thrills and adventures category thanks to this spectacular image of the Tre Cime di Lavaredo mountains in the Italian Dolomites. He describes the mountains as ‘some of the most spectacular peaks in Italy’ 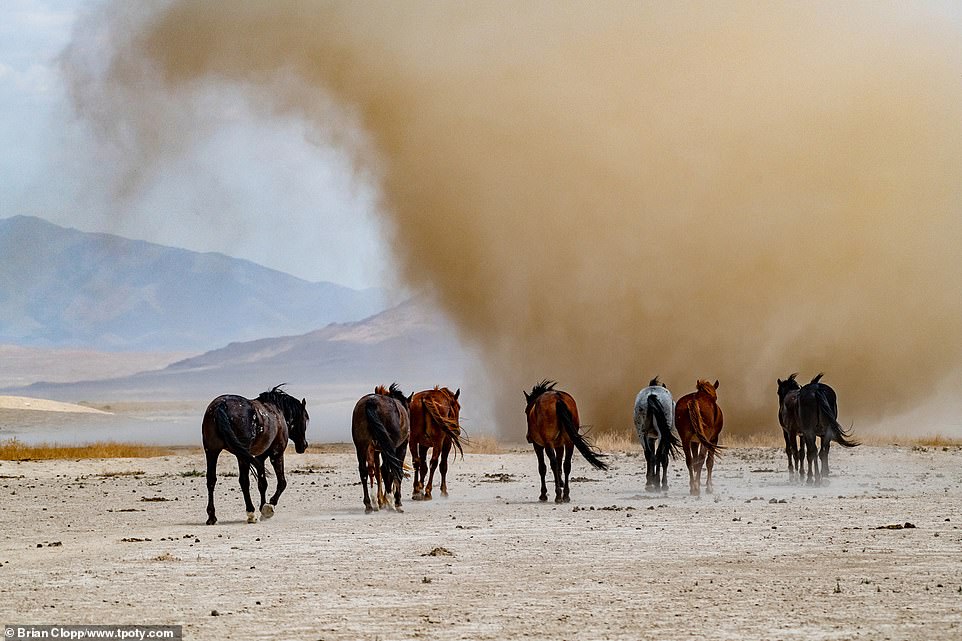 American photographer Brian Clopp is the winner of the portfolio prize in the thrills and adventures category. This image that he snapped shows a band of wild stallions walking towards a looming dust cloud on Dugway Proving Ground in Utah. He said: ‘The stallions are accustomed to their harsh desert environment and face whatever challenges nature throws their way’ 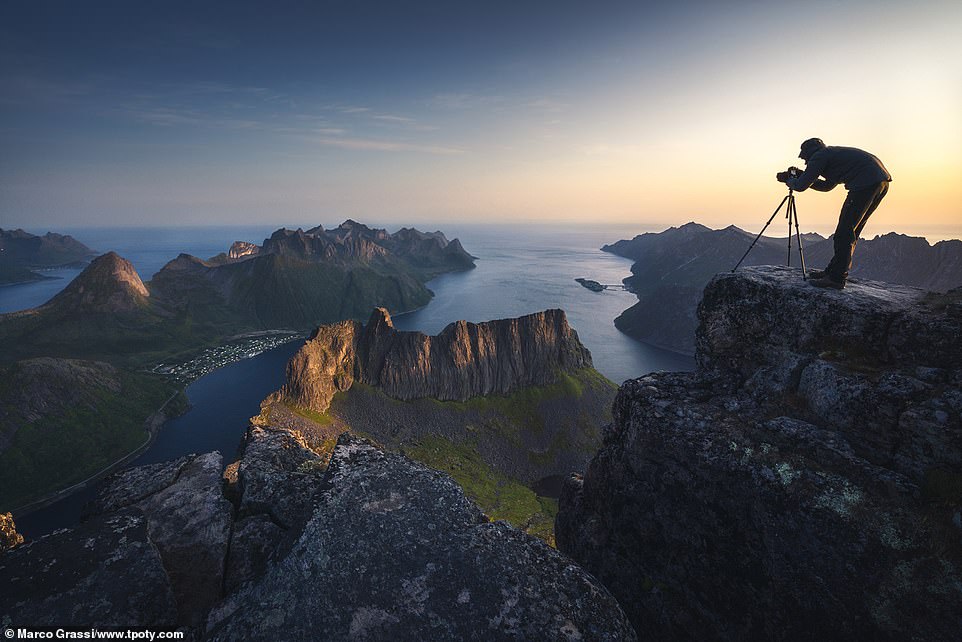 Highly commended photographer Marco Grassi is pictured shooting in the middle of the night from the top of one of the highest peaks on Senja Island, Norway. This picture is listed in the thrills and adventures category 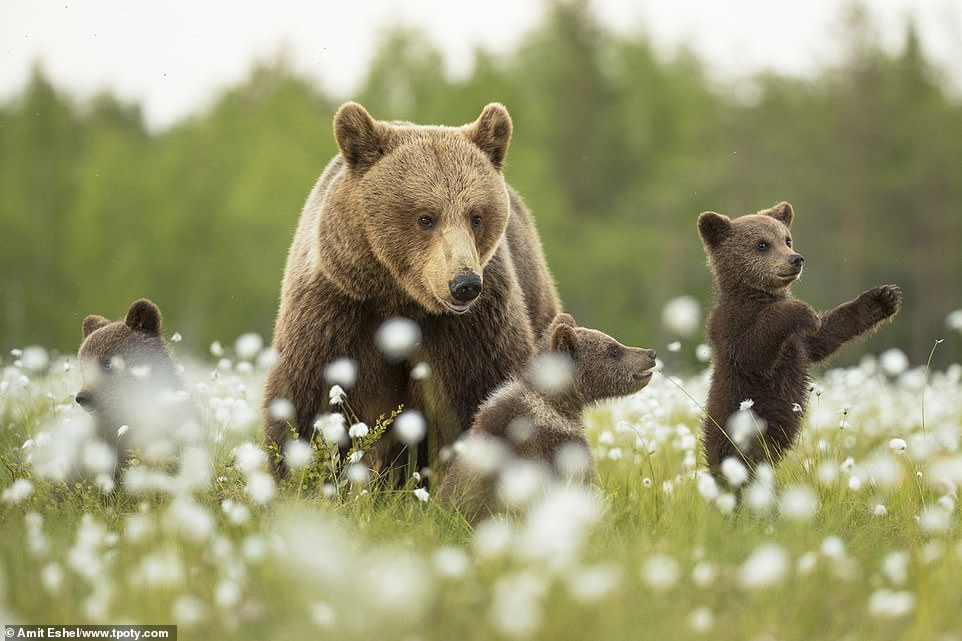 Amit Eshel, an Israeli photographer, snapped this sweet image of Eurasian brown bears in Oulu province in Finland. This photo is given a special mention in the endangered planet category. Amit said: ‘After a long wait, my efforts bore fruit and I was privileged to witness this beautiful family of a mother and triplet wild Eurasian brown bears stepping out of the forest and playing in this beautiful setting’ 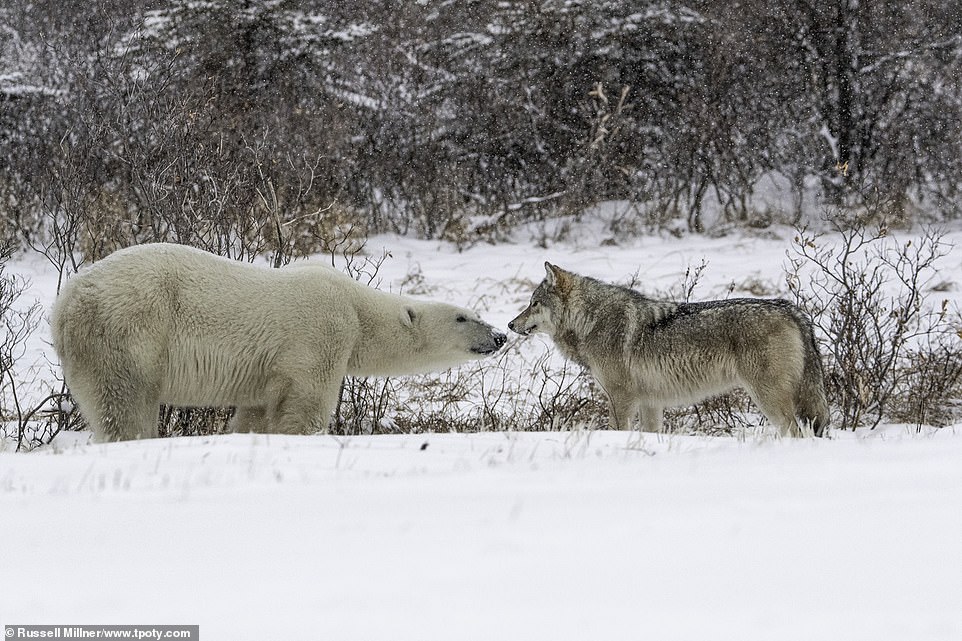 Russell Millner receives a special mention in the thrills and adventures category for this fascinating image of a bear and a wolf in Nanuk, Hudson Bay, Canada. The British photographer explained: ‘This wolf approached the bear, it seemed to be the alpha female. After this wary meeting of apparent mutual respect, each continued about their business, tolerant of the other’ 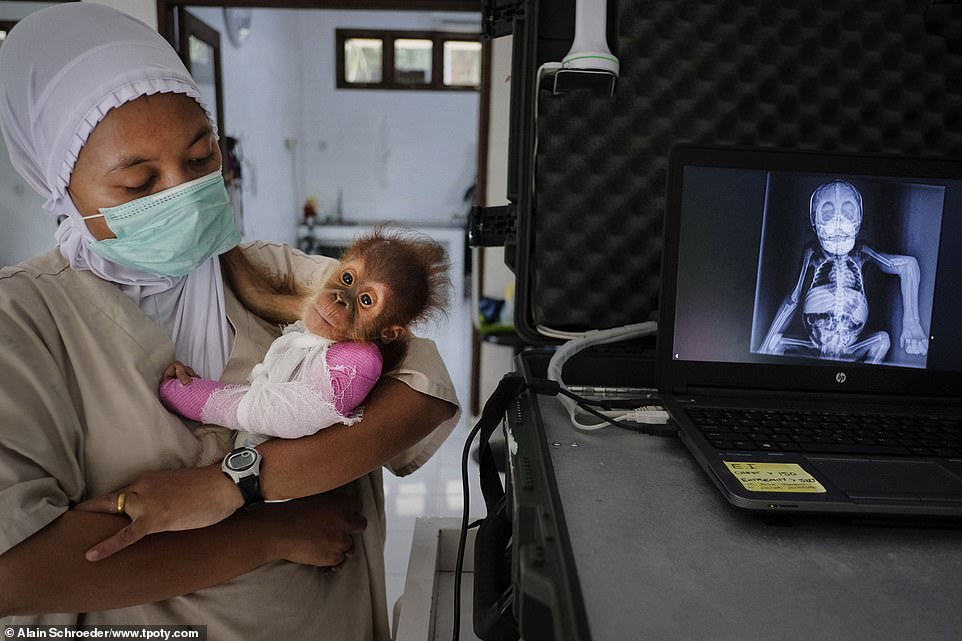 Belgian photographer Alain Schroeder is the winner of the endangered planet category’s portfolio prize. This fascinating shot, taken by him in Indonesia, shows an orangutan called Brenda, who has a broken arm. He explained: ‘Brenda, who is estimated to be a three-month-old female orangutan, was confiscated from a villager in Aceh. The humerus bone in her left arm was completely snapped in two. Yenny, the vet, is standing next to Brenda’s X-ray that shows the broken bone’ 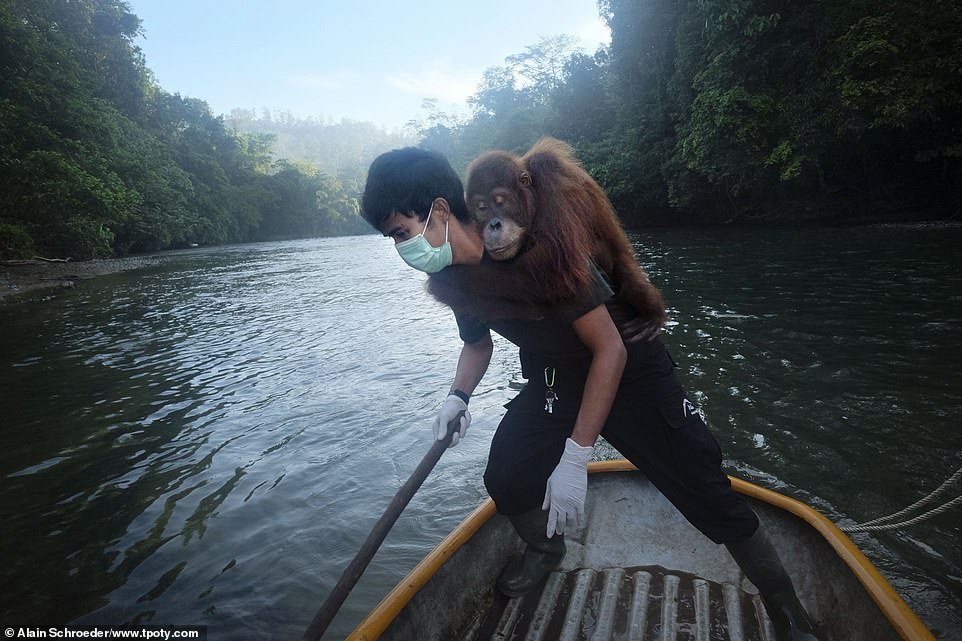 This heartwarming shot by Alain Schroeder, winner of the endangered planet category’s portfolio prize, was snapped at the Jantho Orangutan Reintroduction Centre in Aceh province in Indonesia. It shows veterinarian Pandu crossing the river on a small boat carrying Diana, an eight-year-old female orangutan, who is set to be released back into the wild 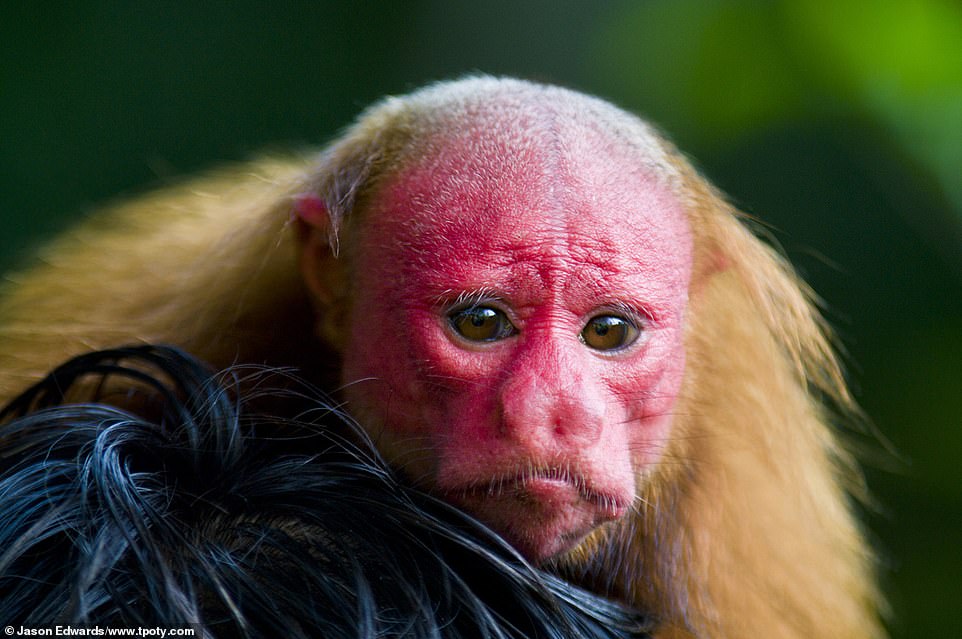 A bald uakari, an endangered primate from the forests of the Amazon basin, is pictured in Iquitos, Peru. The image, taken by Australian photographer Jason Edwards, is given a special mention in the endangered planet category. Jason said: ‘This male was confiscated from poachers and now resides with an Indian family. Given it was not raised by its mother and did not learn the skills necessary to survive alone, it cannot be released back into the wild’ 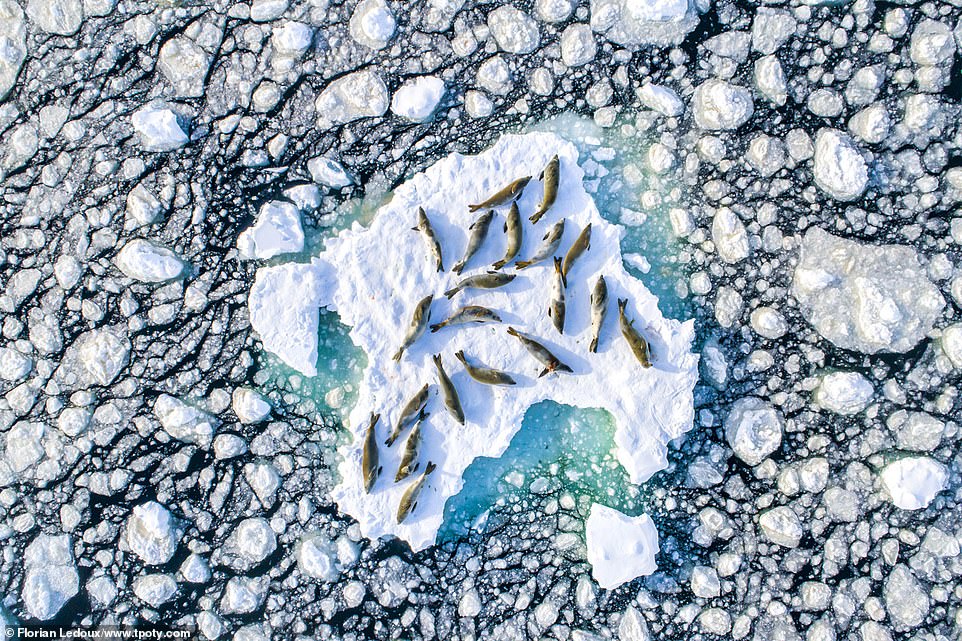 Florian Ledoux is runner-up in the endangered planet category’s portfolio prize. This shot of his shows crabeater seals resting on broken ice in the Antarctic Peninsula after a night feed. He said: ‘Crabeater seals depend on the ice to feed, rest and give birth’ 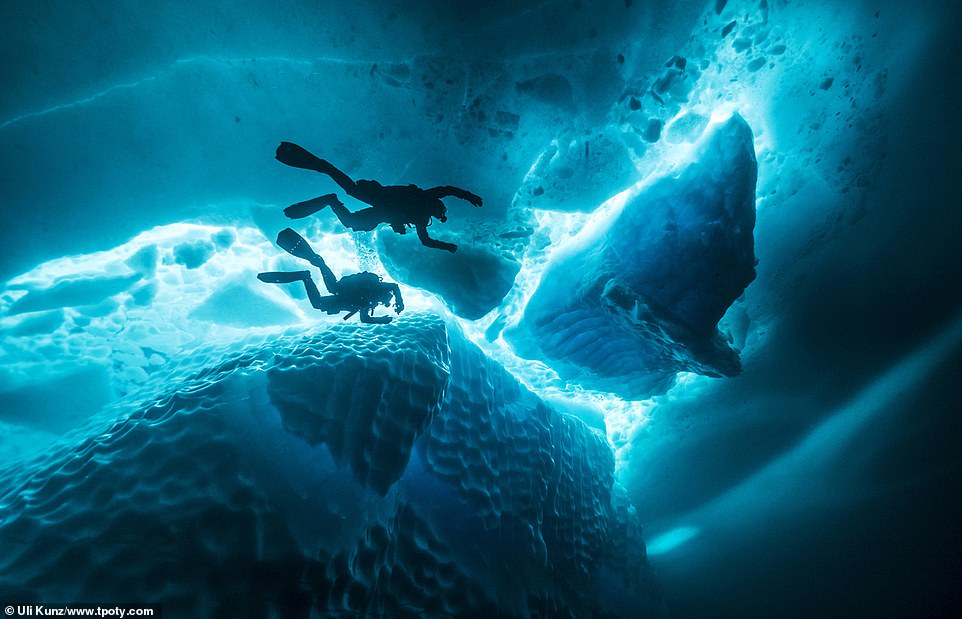 This underwater image taken in Tasiilaq, Greenland, earns German photographer Uli Kunz a special mention in the thrills and adventures category. He said: ‘In autumn, large icebergs may drift into the bay and get stranded in shallow areas. In winter, the ocean surface freezes, trapping the icebergs. Divers in water as cold as -2°C can marvel at 500 shades of blue for about 30 minutes until their faces and fingers get numb, forcing the divers back to the surface’ 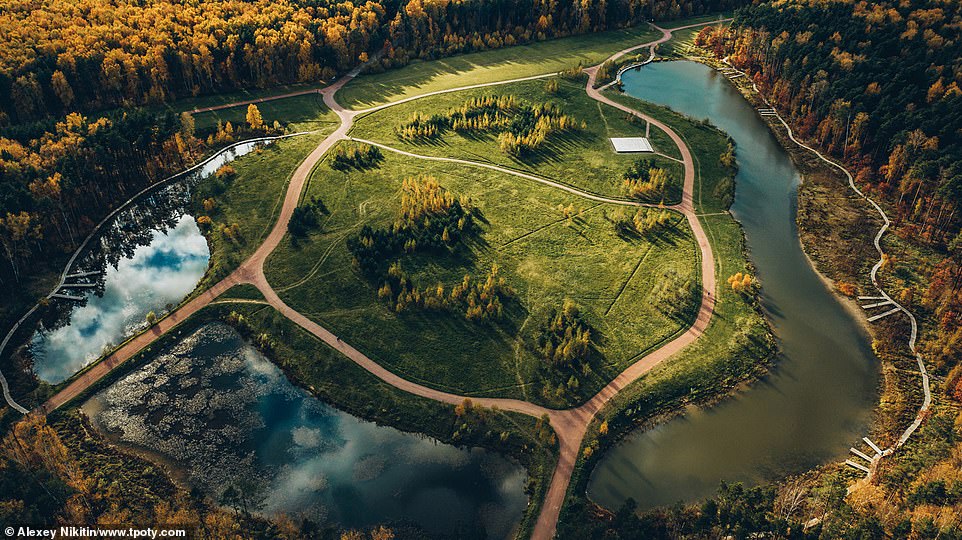 Alexey Nikitin, an 18-year-old from Russia, is runner-up in the Young Travel Photographer of the Year aged 15 to 18 category. This aerial shot that he captured shows Mesherskiy Park in Moscow in the autumn 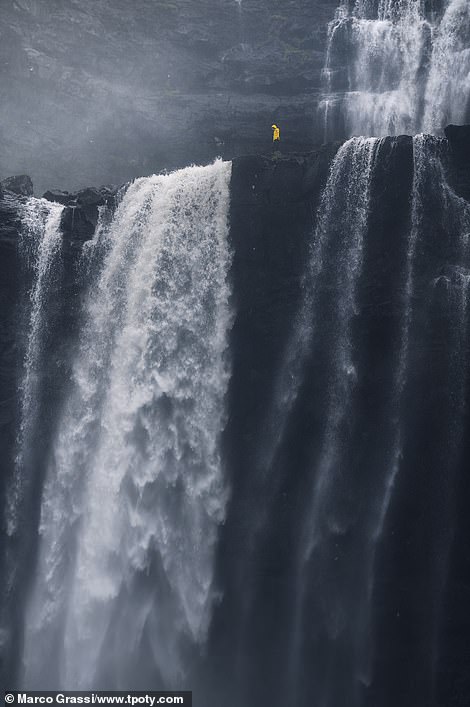 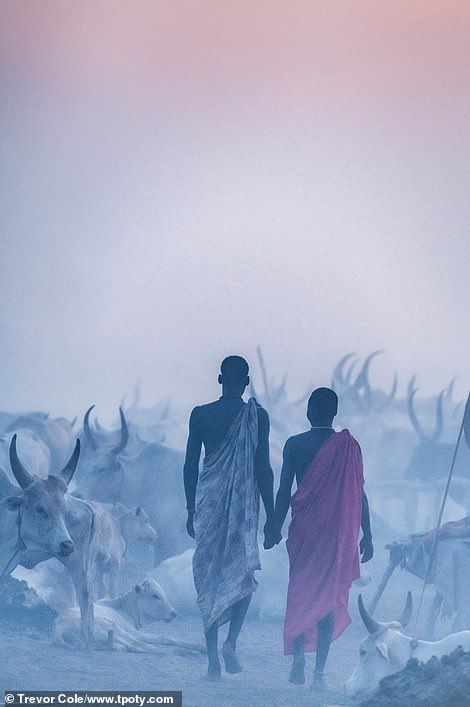 The 459ft-tall Fossá waterfall, the biggest waterfall in the Faroe Islands, is pictured left after a night of heavy rain. The image was snapped by Italian photographer Marco Grassi, who is commended in the thrills and adventures category. Irish photographer Trevor Cole is the winner of the portfolio prize in the people and cultures category. He captured a dramatic image, right, of Mundari people with their cattle in Terekeka County, South Sudan. He explained: ‘The bond between the tribesmen and their animals is reflected in the tribal bond itself. The smoke, fires and dust create a scene, which is almost biblical. The symbiotic bond between man and the cattle is a scene to behold’ 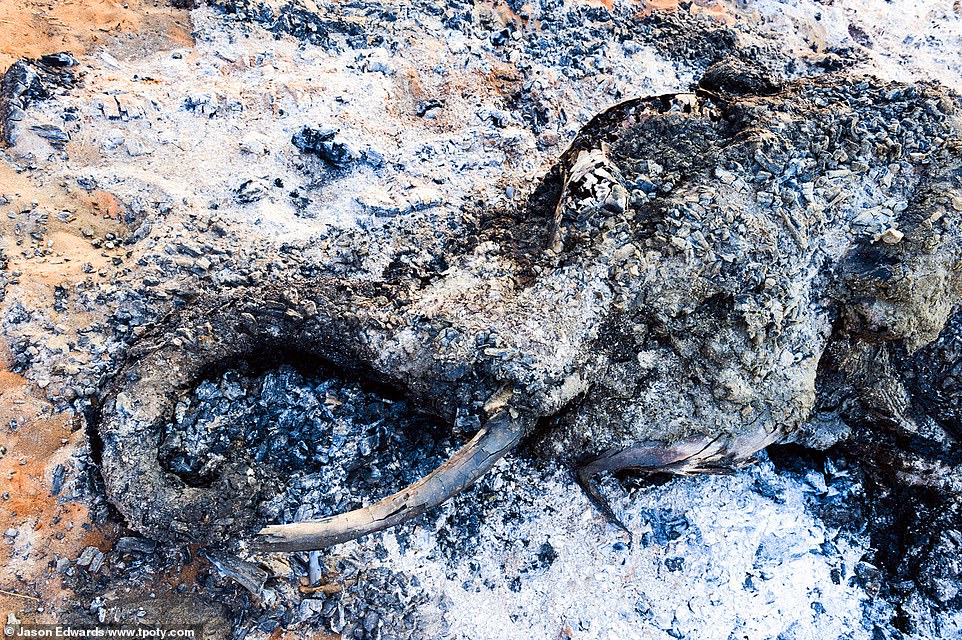 The winner of the best single image in the endangered planet category is Australian photographer Jason Edwards. His heartbreaking picture shows the tortured and charred remains of an African elephant at the roadside in Chobe National Park, northern Botswana. He explained: ‘It was originally slaughtered for bushmeat, but the poachers were disturbed before they could dismember the carcass’ 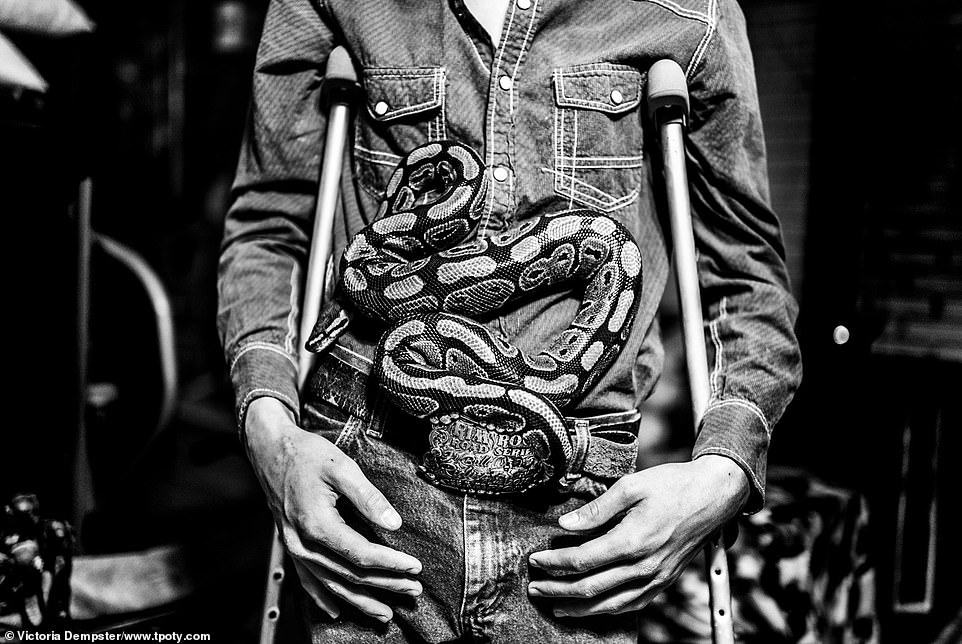 Runner-up for the portfolio prize in the people and cultures category is British photographer Victoria Dempster. Pictured is one of her images of a cowboy called Dominic in Olathe, Colorado. It shows his pet snake wrapped around his belt buckle. Victoria says he won the serpent at the Hotchkiss Rodeo in Colorado 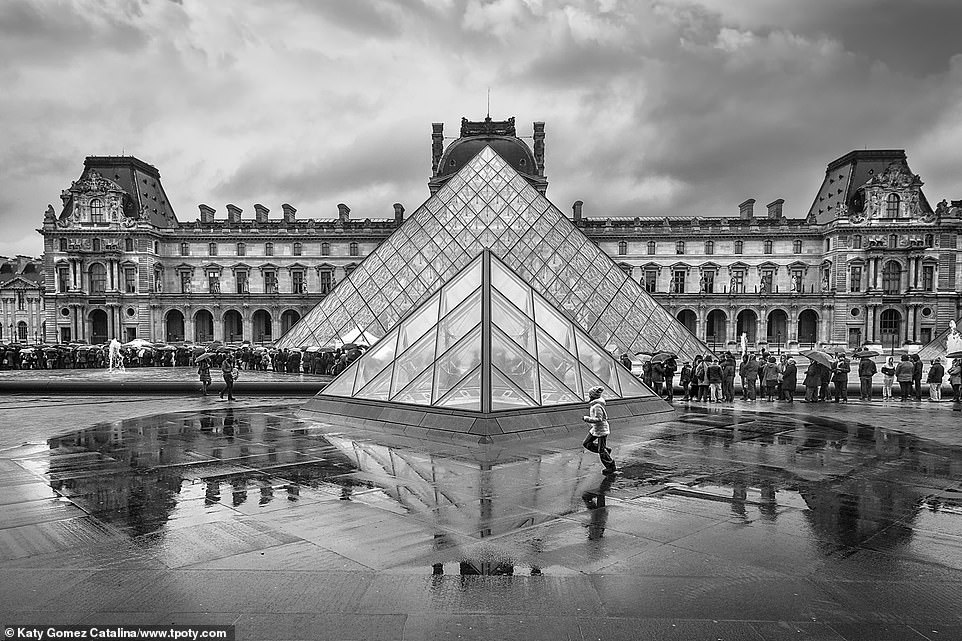 The overall winner of the Travel Photographer of the Year contest is Spanish photographer Katy Gomez Catalina. Pictured is one of her winning snaps, which shows the Louvre in Paris. She said: ‘It was raining and people formed a perfect row to enter the Louvre Museum. The only dynamic note of the scene was a boy who ran across’ 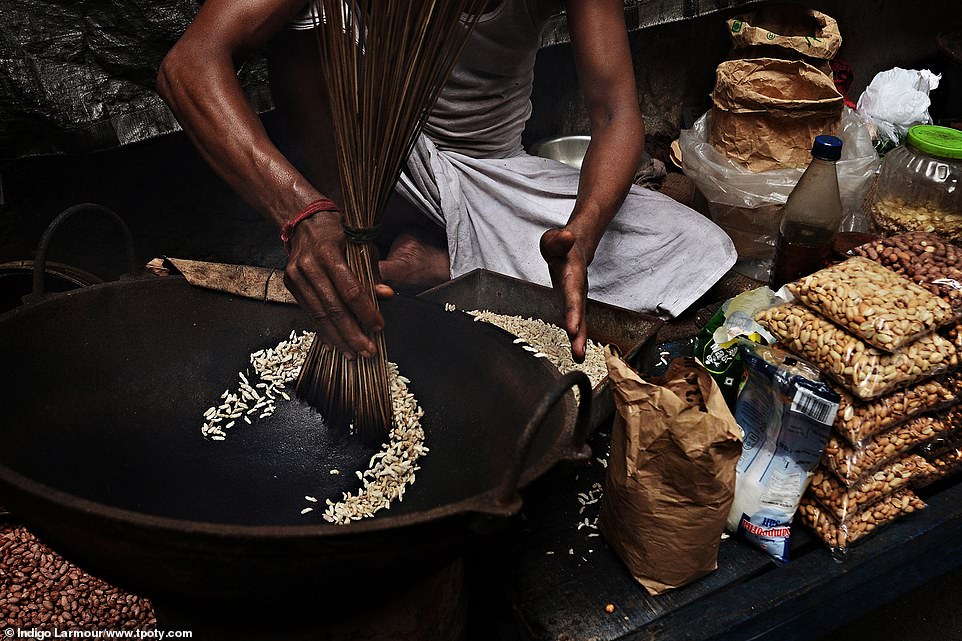 Young Travel Photographer of the Year 2019 is 11-year-old Indigo Larmour from Ireland. This shot of hers shows a street food seller in Kolkata, India. She explained: ‘Any journey needs street food! This street snack seller was cooking us some puffed rice’ 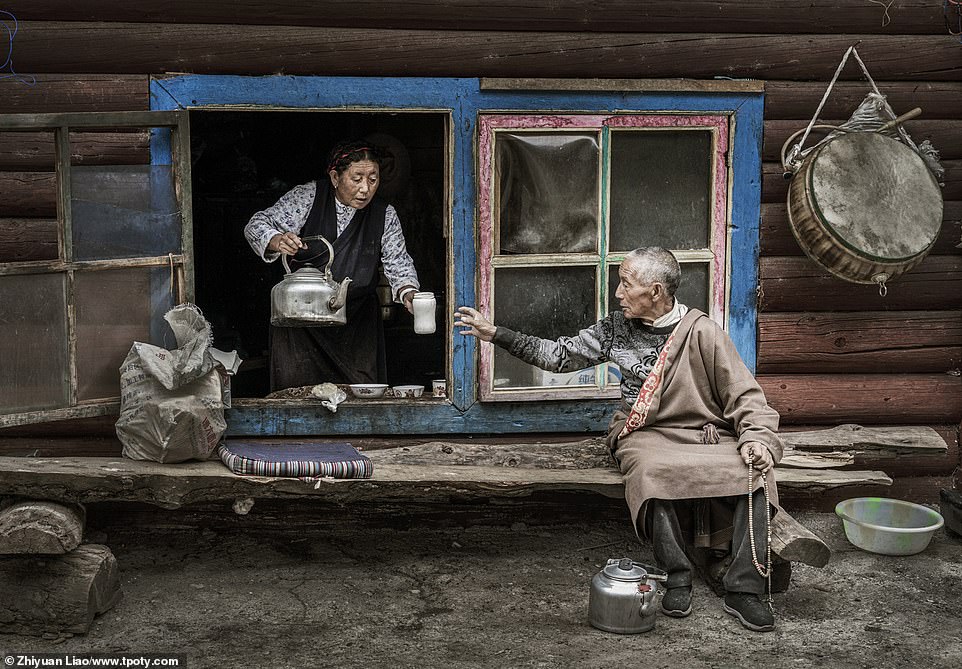 Chinese photographer Zhiyuan Liao is commended in the people and cultures category for a portfolio of stunning pictures captured in Tibet. He said of this image: ‘Whenever a neighbour, relative or friend visits, they will be offered a bowl of butter tea’ 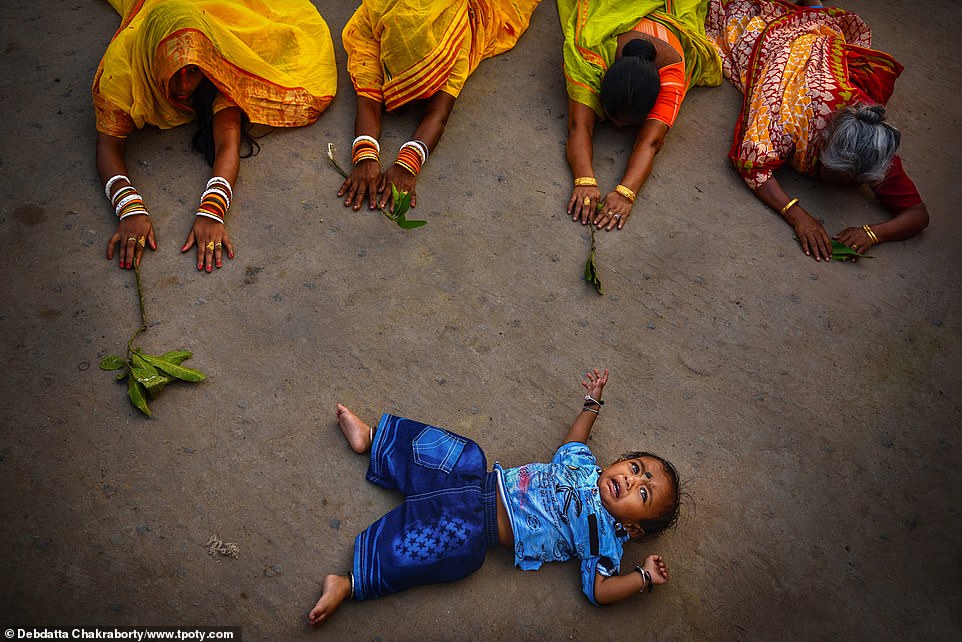 Debdatta Chakraborty from India is the winner of the best single image in the people and cultures category. He captured this fascinating photo in Kolkata, India. He explained: ‘On the day of the Chhath festival in India, Hindus, mainly the women, perform Dondi, a kind of penance to appease the divinity and thereby praying for a happier future’ 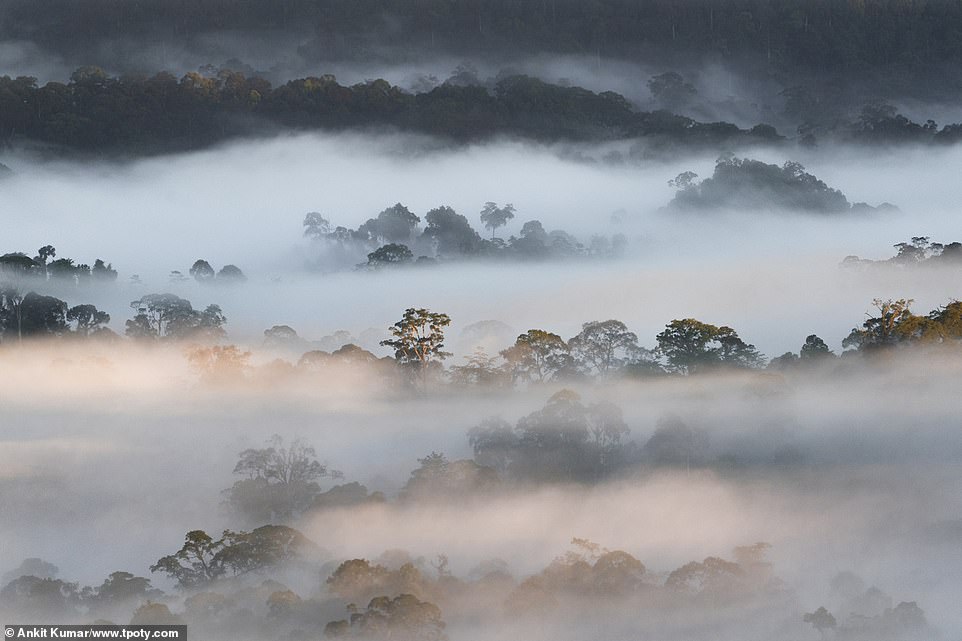 Indian photographer Ankit Kumar, 16, scoops the title of Young Travel Photographer of the Year aged 15 to 18. The judges were impressed with his work, including this amazing shot of clouds wrapped around trees in the Danum Valley of Borneo in Malaysia 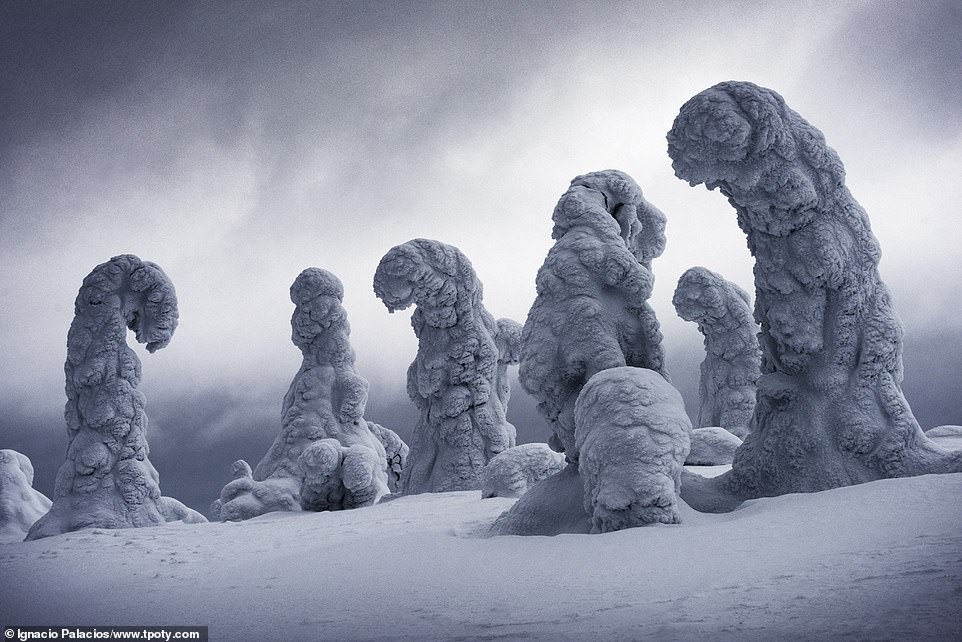 This image of frozen trees in Finnish Lapland was captured by Spanish-Australian photographer Ignacio Palacios. He is runner-up in the art of travel category’s portfolio prize 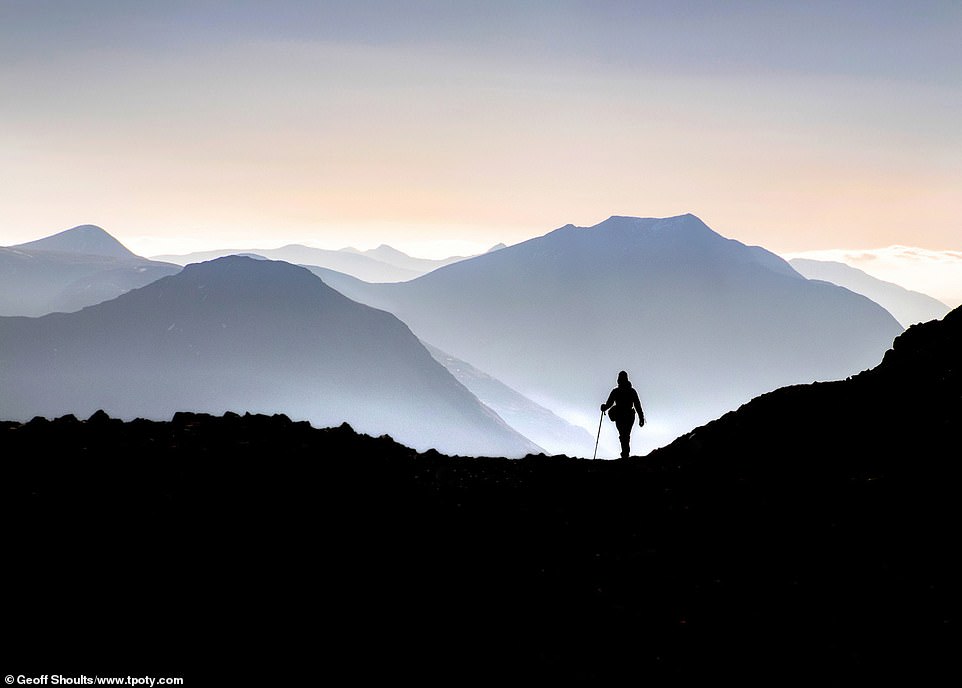 British photographer Geoff Shoults is the winner of the best single image in the art of travel category. His gong-luring shot shows a walker in the Scottish Highlands 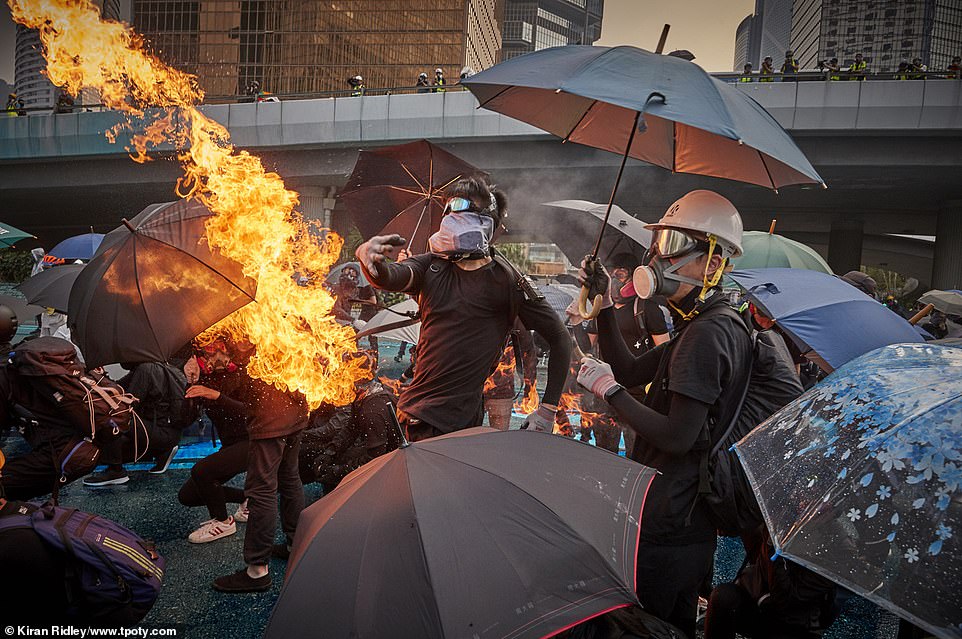 British photographer Kiran Ridley is the winner of the Travel Photographer of Year’s Timothy Allen Photography Scholarship Award. This recognises original documentary travel photography. Kiran put together a portfolio of images that included scenes of unrest in Hong Kong last year. One image he snapped shows a pro-democracy protester throwing a Molotov cocktail towards police during anti-government demonstrations, setting fire to other protesters in the process 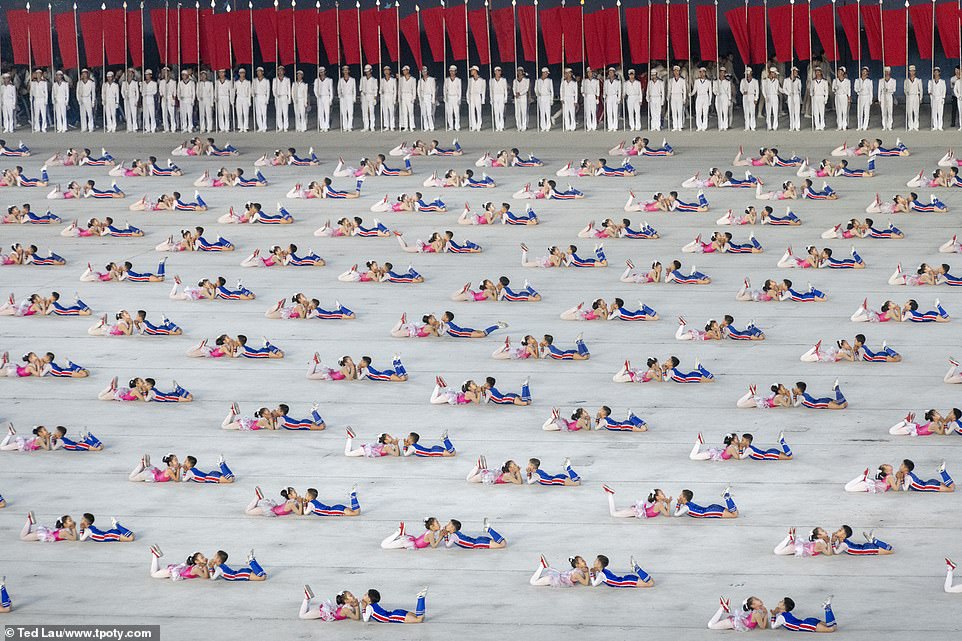 Ted Lau, a photographer from Hong Kong, is highly commended in the art of travel category. This shot of his was captured at the Mass Games in Pyongyang, North Korea. He said: ‘Since the Mass Games resumed in 2018, all of the school children get involved. After months of training, most of them are near professional gymnasts’ 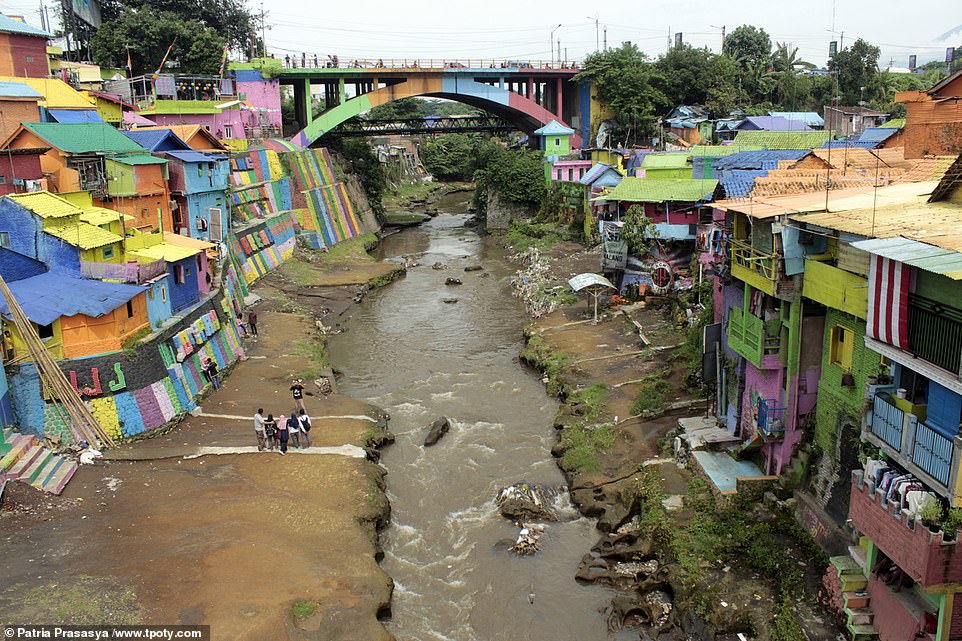 Colourful houses in the city of Malang in Indonesia. This eye-catching shot was captured by 17-year-old Patria Prasasya from Indonesia. She is highly commended in the Young Travel Photographer of the Year aged 15 to 18 category 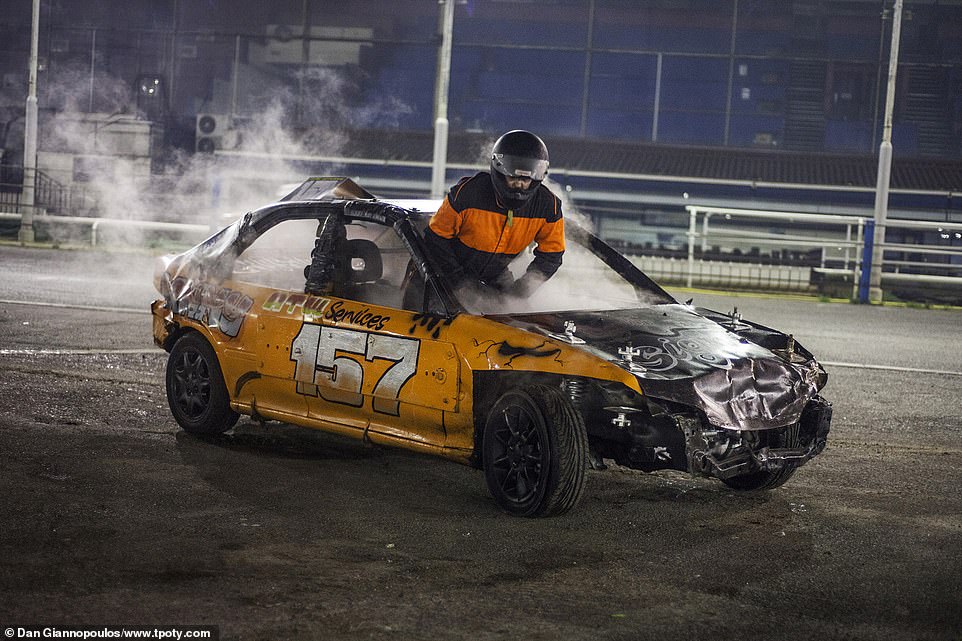 A driver swiftly exits his smoking car after an engine malfunction during oval racing at Wimbledon Stadium in London. The dramatic image was captured by Dan Giannopoulos, who is highly commended in the thrills and adventures category