These incredible pictures offer a window to history that exists all around.

They are the winning and shortlisted images in the Historic Photographer of the Year Awards 2020, which were unveiled today by broadcaster and historian Dan Snow and historic and cultural travel experts Trip Historic.

This year’s awards called on photographers to scour their photographic archive and ‘share their most astonishing imagery of those places which dominate our past’.

The overall winning image was a transfixing photo of the Grade II-listed Brighton Palace Pier by Michael Marsh. The Historic England category was won by Adam Burton’s aerial view of St Michael’s Church on Somerset’s Burrow Mump, while the newly-launched Where History Happened award, run in partnership with television channel Sky History, went to Martin Chamberlain for his sombre shot of the ancient city of Palmyra, captured before the destruction wrought by Syria’s civil war.

Mr Snow said ‘these cultural monuments stand as a testament to the incredible stories that took place all around us’, while Claudia Kenyatta from Historic England added: ‘It was a joy to go through all of the photographs submitted, from incredible industrial landscapes through to stunning aerial shots.’ And commenting on the overall winning entry, Dan Korn from Sky History said: ‘This submission was genuinely outstanding and truly captured the faded splendour of the pier, and the rusting catafalque beneath.’

The Historic England category was won by Adam Burton with this haunting image of the ruins of St Michael’s Church on Somerset’s Burrow Mump, taken on a misty winter morning 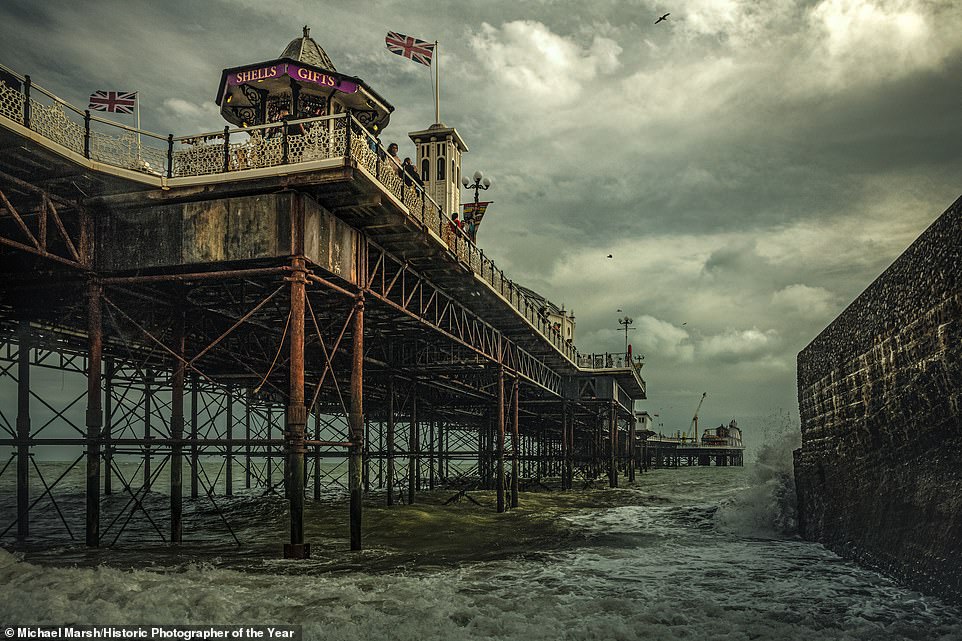 A transfixing shot of the Grade II-listed Brighton Palace Pier by Michael Marsh, which is the overall winning image in the Historic Photographer of the Year 2020 contest. Michael said: ‘My wife and I have been visiting Brighton for a few years now and I always strive to capture this lovely historic seaside town with a sense of the atmosphere and cinematic interpretation that it instils in me’ 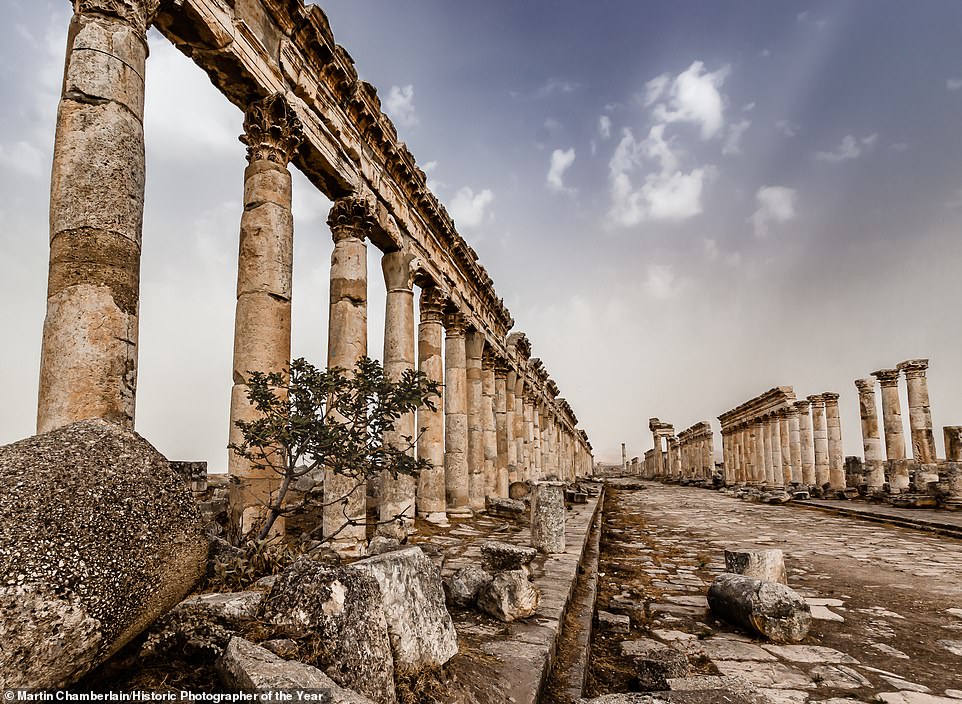 Martin Chamberlain was named the winner of the Where History Happened award for this sombre image of the ancient city of Palmyra, captured before the destruction wrought by Syria’s civil war. He said: ‘I’d dragged my family out of bed early when it was cold and dark to ensure we were at the Great Colonnade early enough to catch the sunrise and the golden hour. Unfortunately, I’d got my timings wrong and we were an hour early so sat around wondering where the sun had gone and waiting for dawn. But it was worth the wait’ 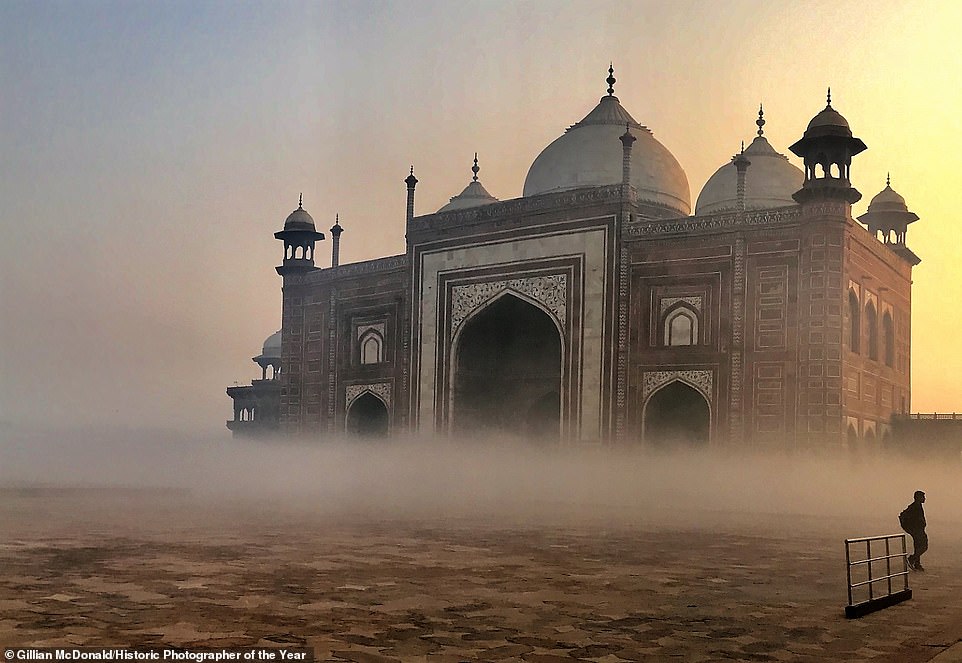 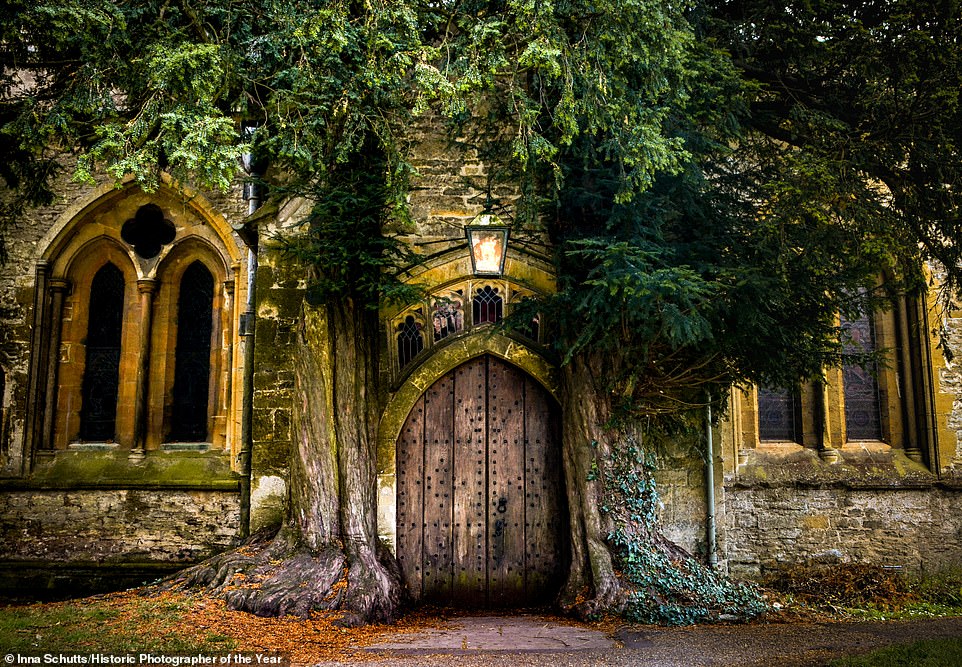 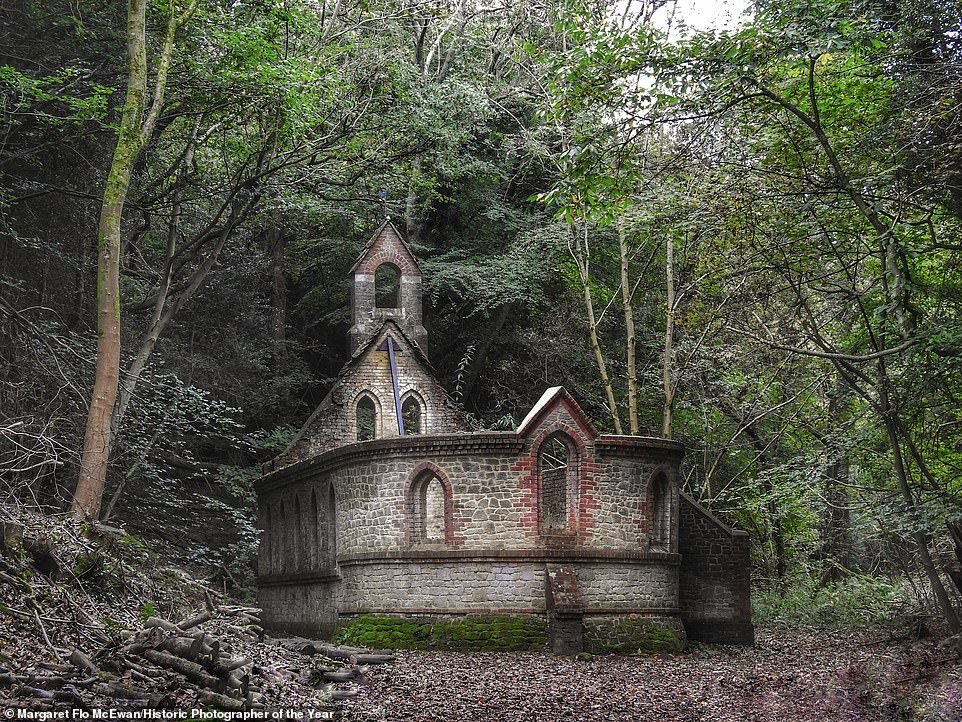 The beautiful Bedham Chapel near Pulborough, Sussex, is the subject of this breathtaking image by Margaret Flo McEwan. She explained: ‘Once upon a time this beautiful little chapel served the local community in Sussex. During the week it was used as the local schoolhouse and on Sundays, the sound of the harmonium could be heard through the forest as the locals sang hymns. This enchanting little building has now fallen silent and lies abandoned in the woods’ 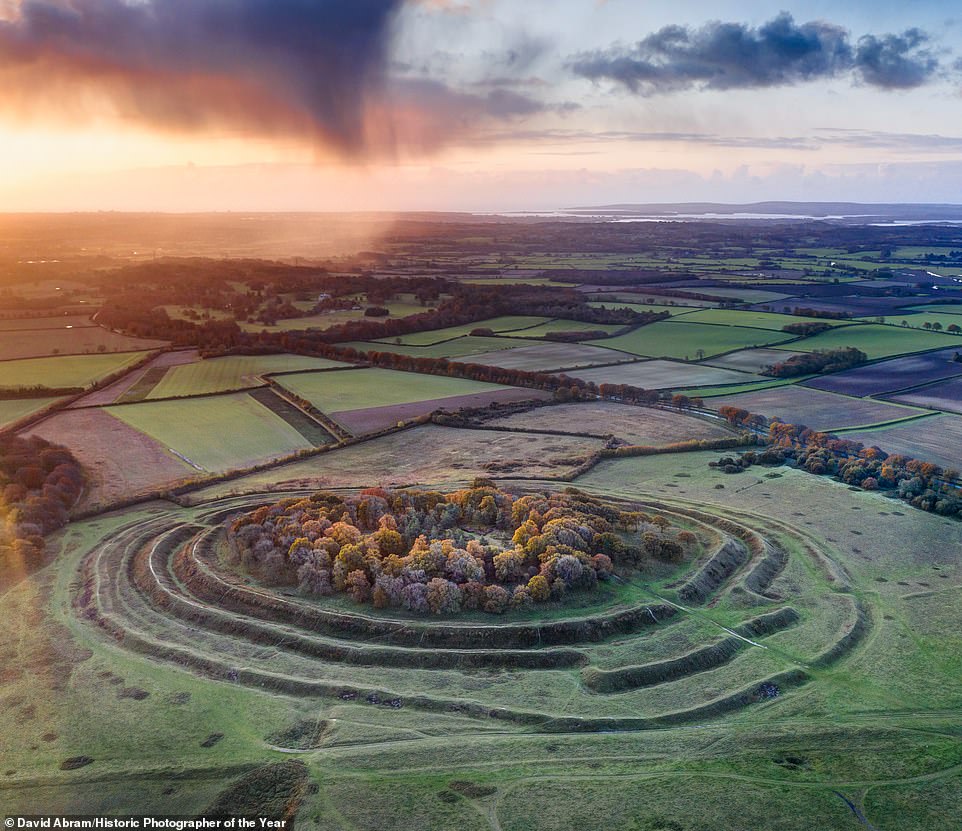 Shot at dawn using a drone, this image by David Abram shows the Durotriges hill fort of Badbury Rings in Dorset. According to the photographer, nobody knows for sure why those in the Durotriges tribe in the first century BC felt the need to erect ‘such formidable defences’. He added: ‘Whatever inspired their creation, the concentric rings stand as a dramatic reminder of the wealth and power the Durotriges derived from trade with the Armoricans of Brittany, based around the harbours at nearby Hengitsbury Head’

A stunning shot by the overall winning photographer, Michael Marsh. This one shows St Thomas Becket Church on Romney Marsh, Kent. Michael said: ‘This lovely little medieval church sits on its own surrounded by dykes and sheep’ 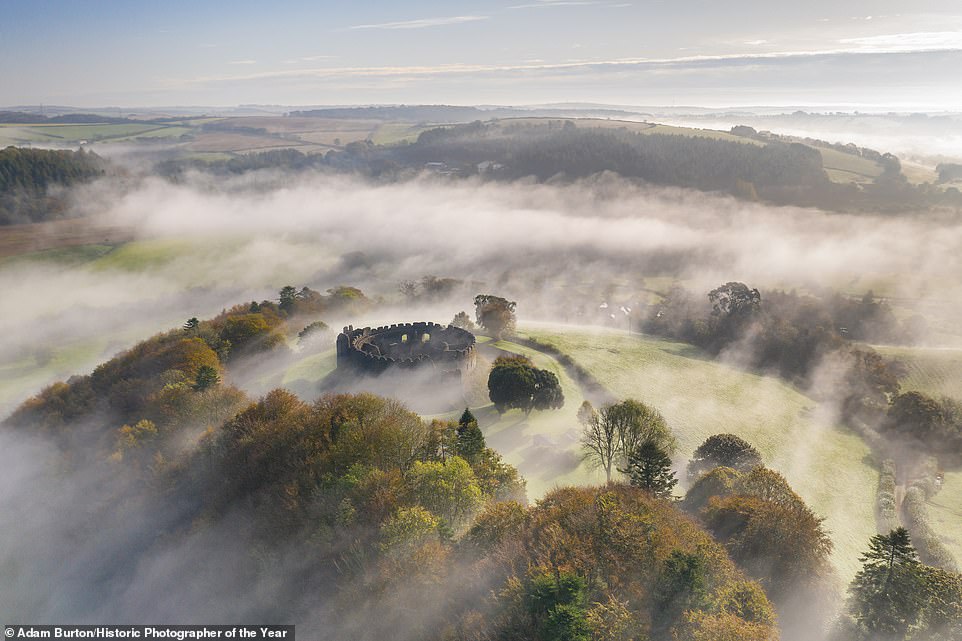 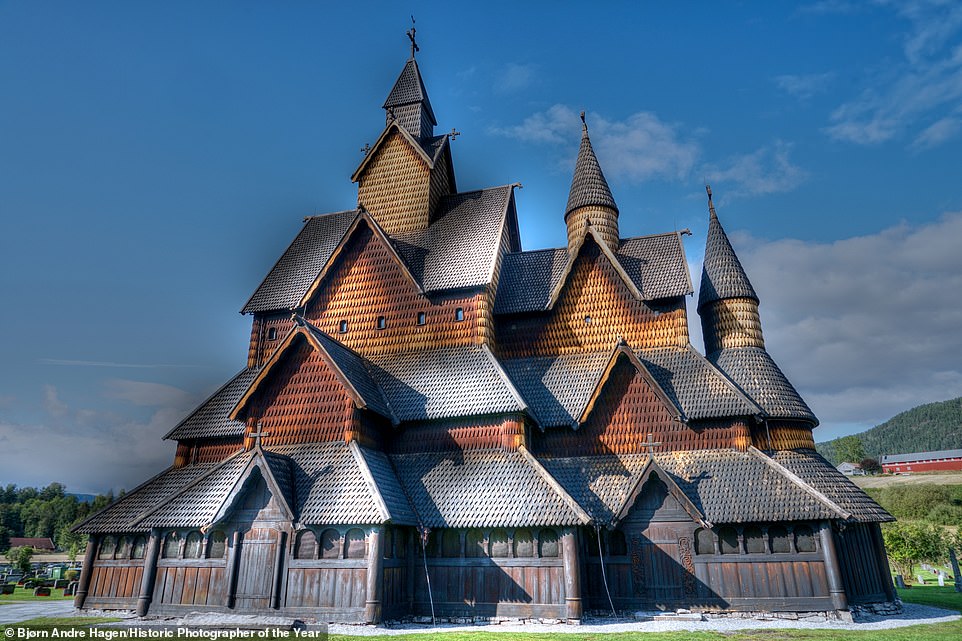 Bjørn Andre Hagen is the photographer behind this breathtaking image of Heddal Stave Church in Notodden, Norway. It is Norway’s largest stave church and was constructed at the beginning of the 13th century 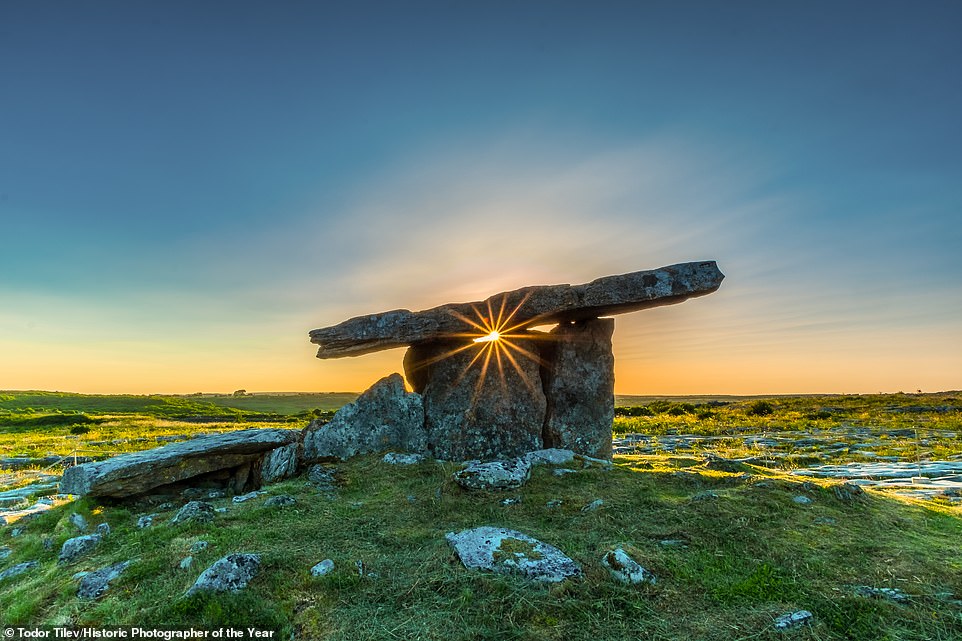 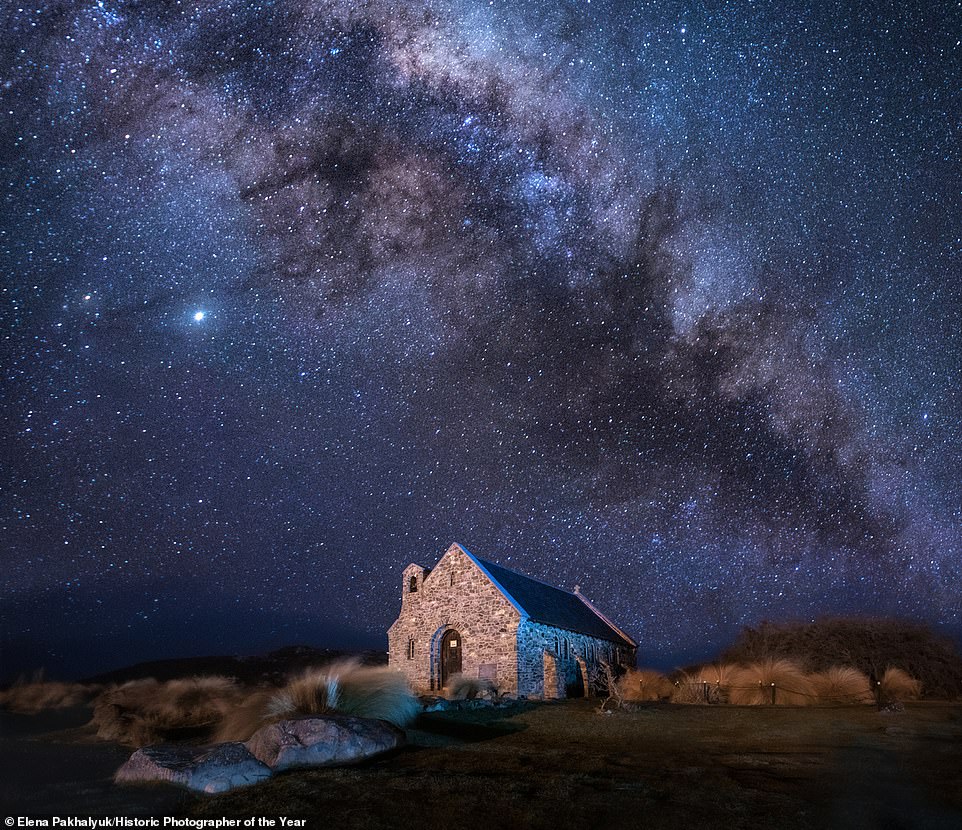 Elena Pakhalyuk is behind this snap of the starry sky around the Church of the Good Shepherd in New Zealand. She said: ‘The sky of the Southern Hemisphere is incredibly beautiful’ 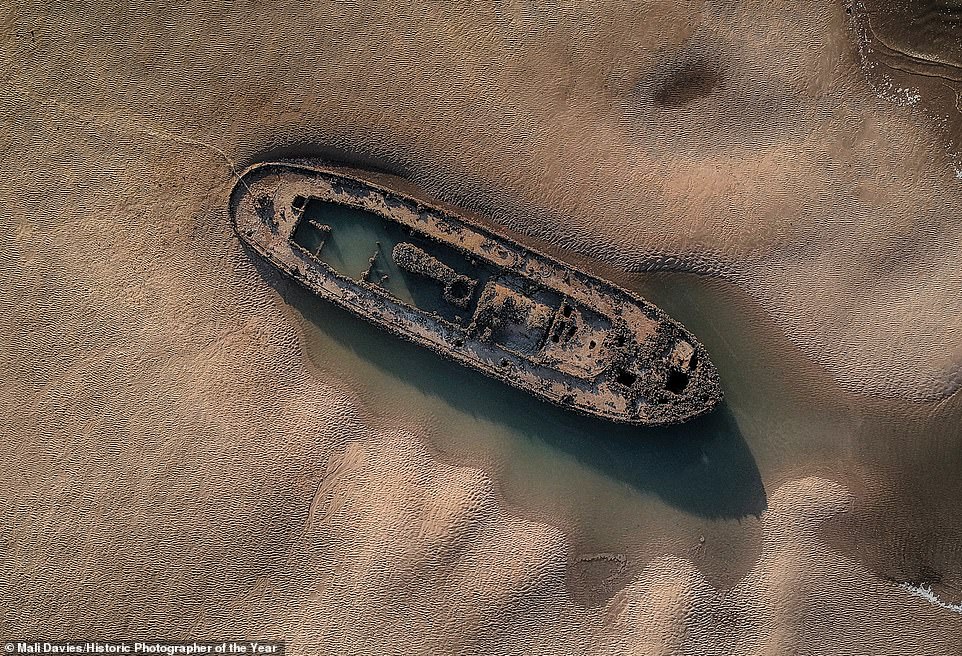 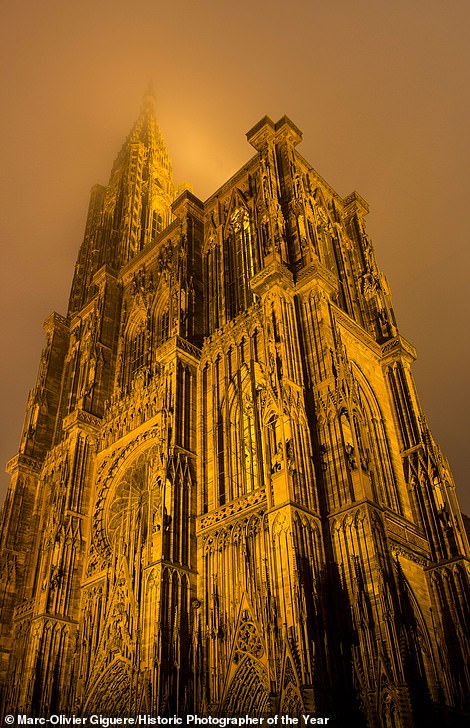 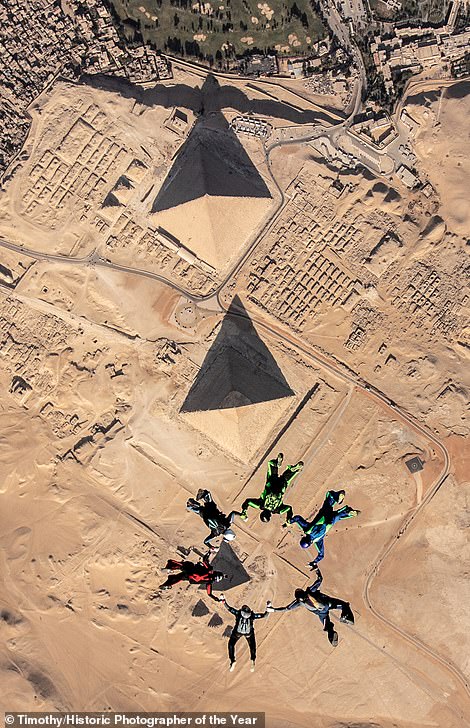 One the left is a magnificent image of Strasbourg Cathedral taken on a foggy night in the French city by photographer Marc-Olivier Giguere. He said: ‘I shot many other photos that night but the cathedral in the fog was the photo I preferred. The cathedral is of a pinkish colour but because of the fog, it reflected all light coming from surrounding buildings, hence the yellow colour. It also feels like the cathedral is coming out of the ground and still growing.’ On the right is a group of skydivers hovering over the Great Pyramids of Giza in an incredible shot by a photographer only known as Timothy. He said: ‘Skydiving in itself is an amazing experience, but to skydive over the great pyramids of Giza is a once-in-a-lifetime experience and even more so if you are very lucky to jump at the right time as the shadows of the pyramids create a shape of a bird’ 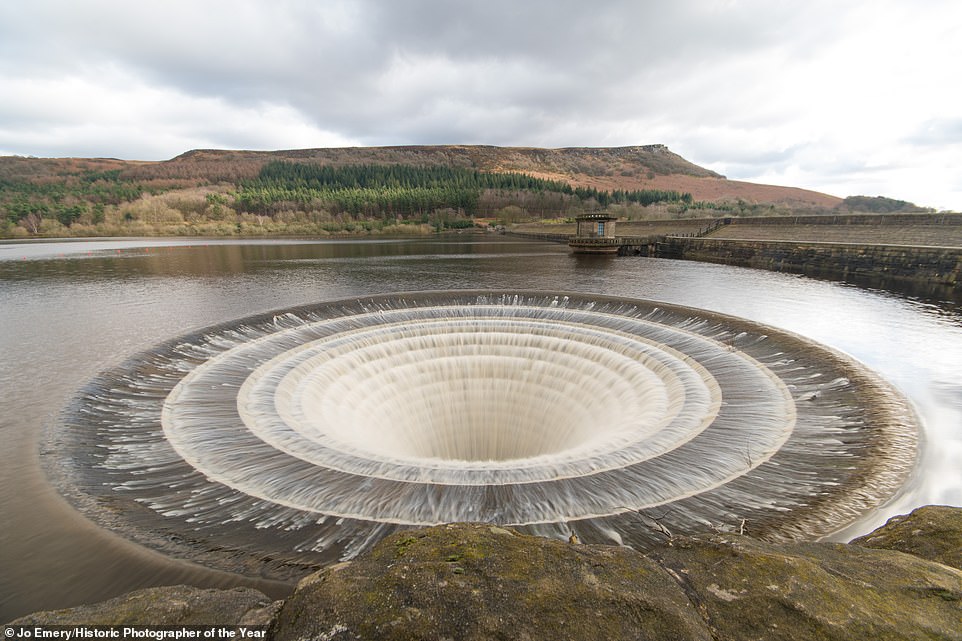 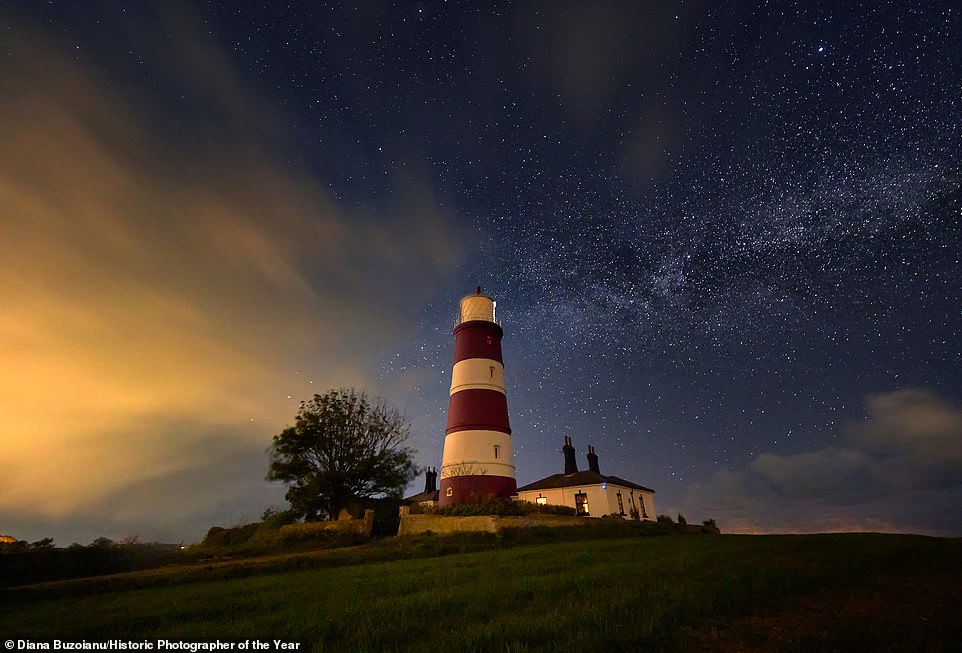 This jaw-dropping shot was taken by Diana Buzoianu. It shows Happisburgh Lighthouse on the Norfolk Coast. The photographer notes that it is the oldest working lighthouse in East Anglia 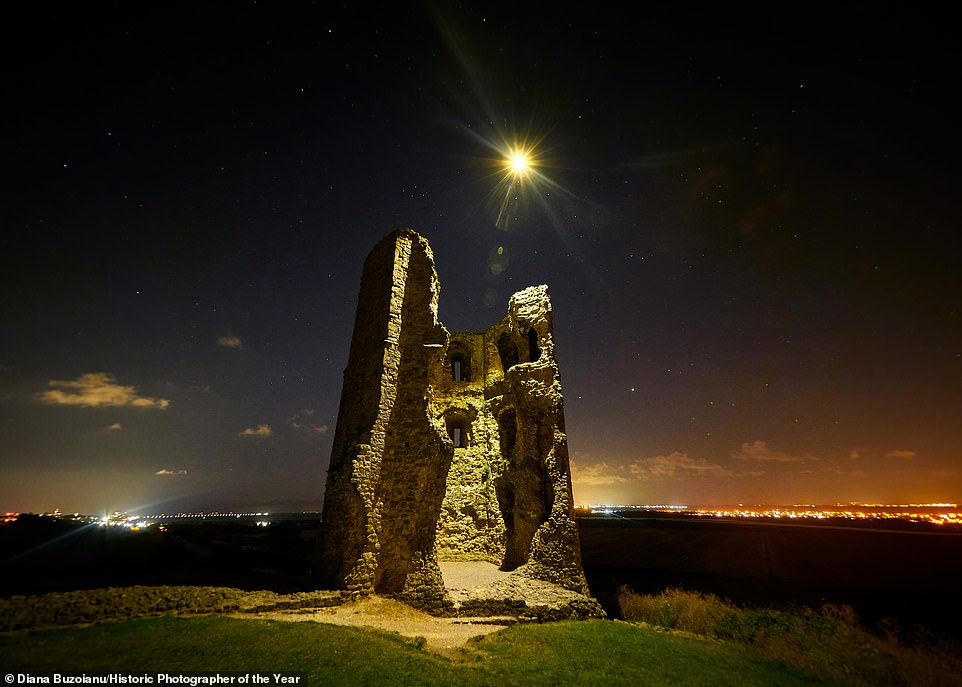 Another shot by Diana Buzoianu, this time of the ruins of Hadleigh Castle in Essex. She said: ‘This was once an important castle built during the reign of Henry III. It shines, once more, under the bright stars of the night sky as a drone passes by’ 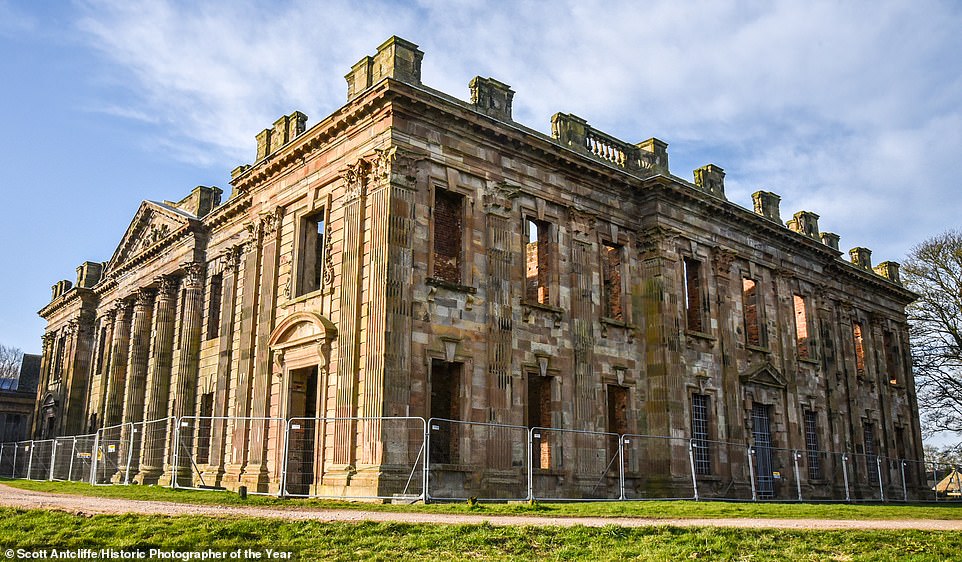 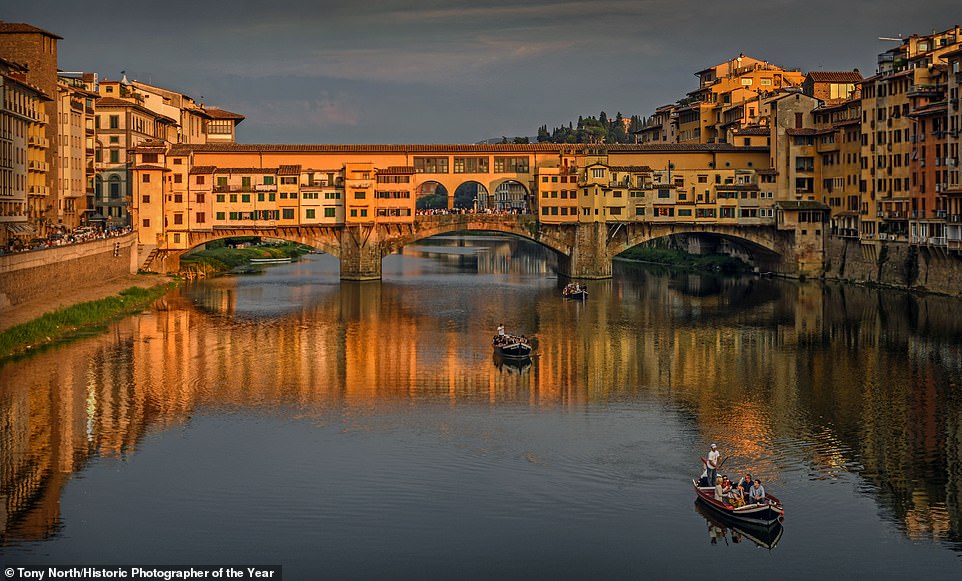 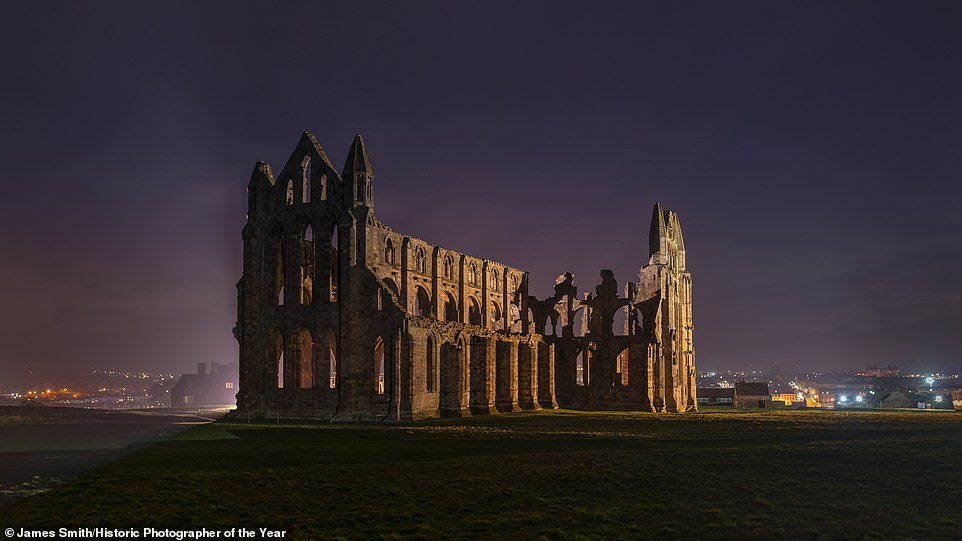 James Smith, who was born in Whitby and lived there until he was 21, is the photographer behind this incredible image of Whitby Abbey. He explained: ‘I’ve spent many wonderful years visiting the historic treasures that Whitby has to offer but there’s nothing more iconic than the Abbey that towers over the town’s harbour. Now living in Lincoln, I get back as often as I can to see family and to also photograph some of the beautiful places it has to offer’ 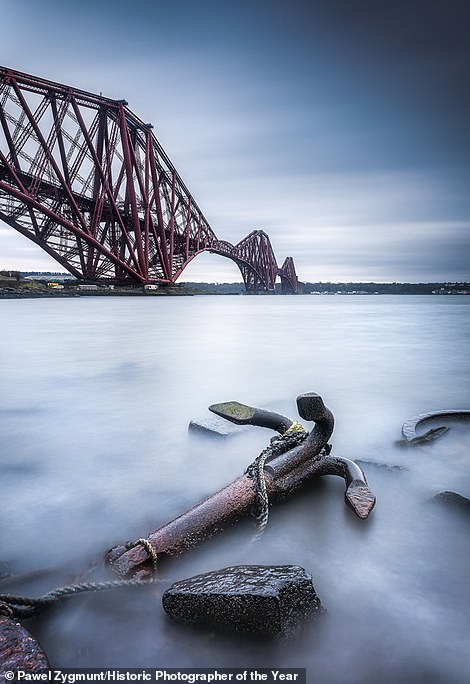 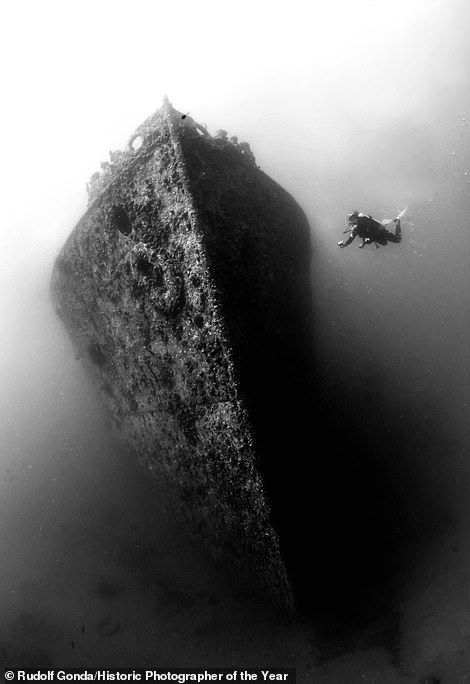 On the left is a majestic shot of the famous Forth Bridge taken by photographer Pawel Zygmunt. He said: ‘I spent a night in Edinburgh just before my Faroes trip. After some quick research, I found out that there was a bus going from the airport to famous Forth bridges. The weather forecast was looking promising and I still had a bit of time before my flight, so I woke up a bit earlier and went to have a look at what I could see. Sunrise didn’t happen, but this is Scotland, so it didn’t surprise me. I had to get off the bus in the middle of nowhere and walk to North Queensferry. There was a small beach beside the bridge and this is where I got this great shot.’ On the right is a dramatic black-and-white shot by Rudolf Gonda that shows the wreck of the SS Turkia in the Red Sea. The photographer noted: ‘The SS Turkia was lost in May of 1941 in the Gulf of Suez. Since the Strait of Gibraltar was blocked due to the Second World War, the British ships had to take the long route through South Africa to the southern Red Sea. The SS Turkia was one of them’ 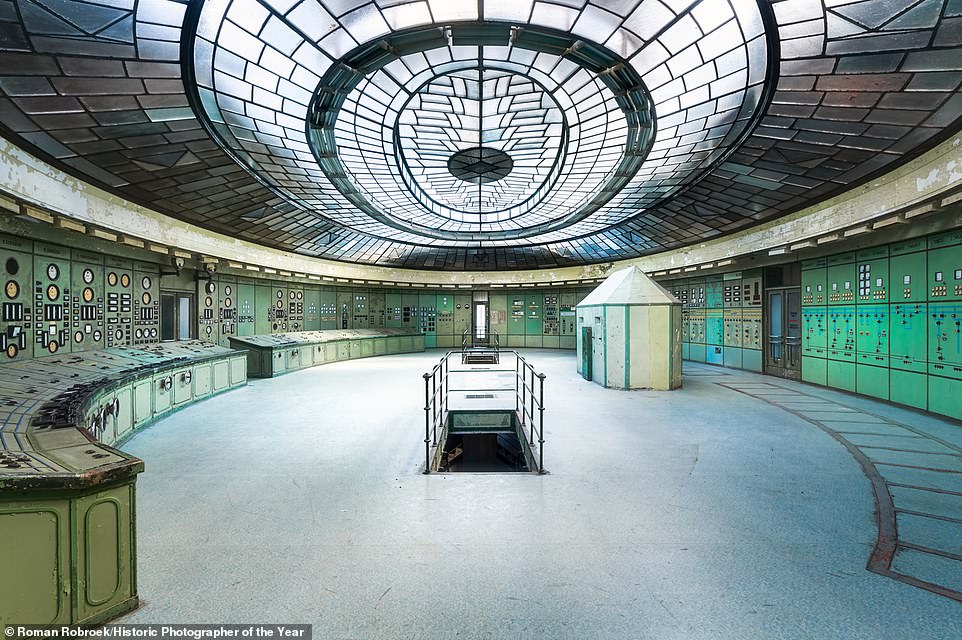 This fascinating shot by Roman Robroek shows the inside of a semi-abandoned power station in Budapest. He said it is a ‘true gem among industrial locations and was once Europe’s most advanced power station’. He added: ‘The control room itself has been abandoned for quite some time, but most parts of the location are still in use providing power to a major city nearby’ 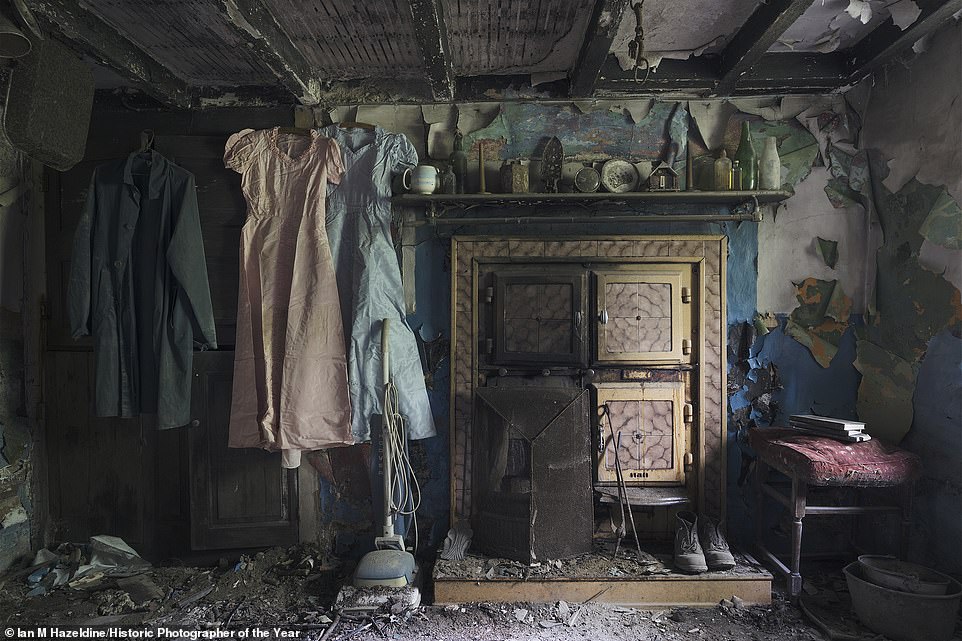 The ceilings may be almost caving in at this deserted old farmhouse in Wales, but photographer Ian M Hazeldine, who snapped this shot, said it was ‘filled with family history’ 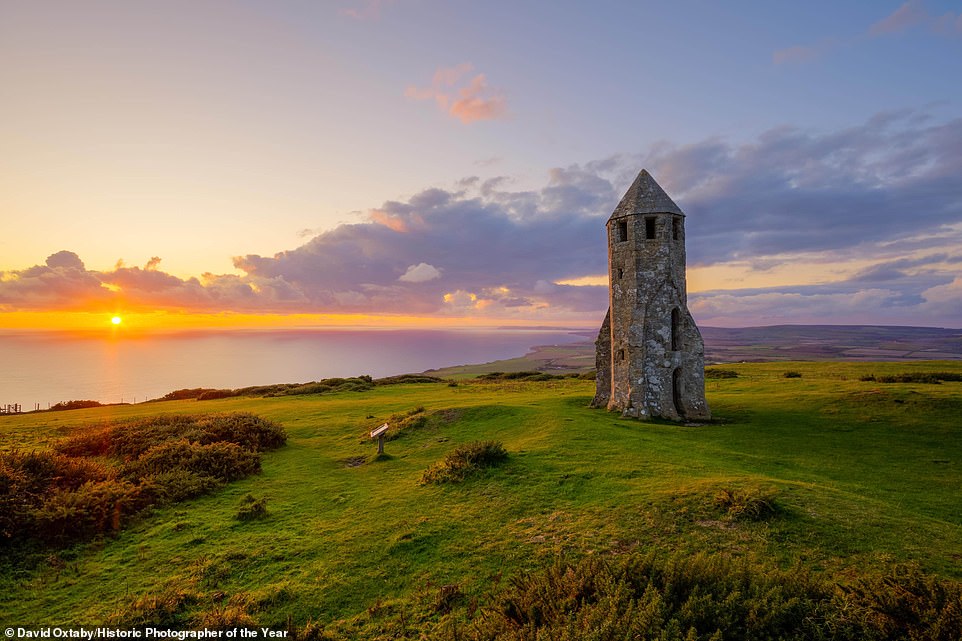 David Oxtaby took this stunning image of St Catherine’s Oratory, which is located on the south side of the Isle of Wight and was used as a lighthouse. He said: ‘Originally built in the 1300s it sadly was never of much use as often it was covered in sea fogs’ 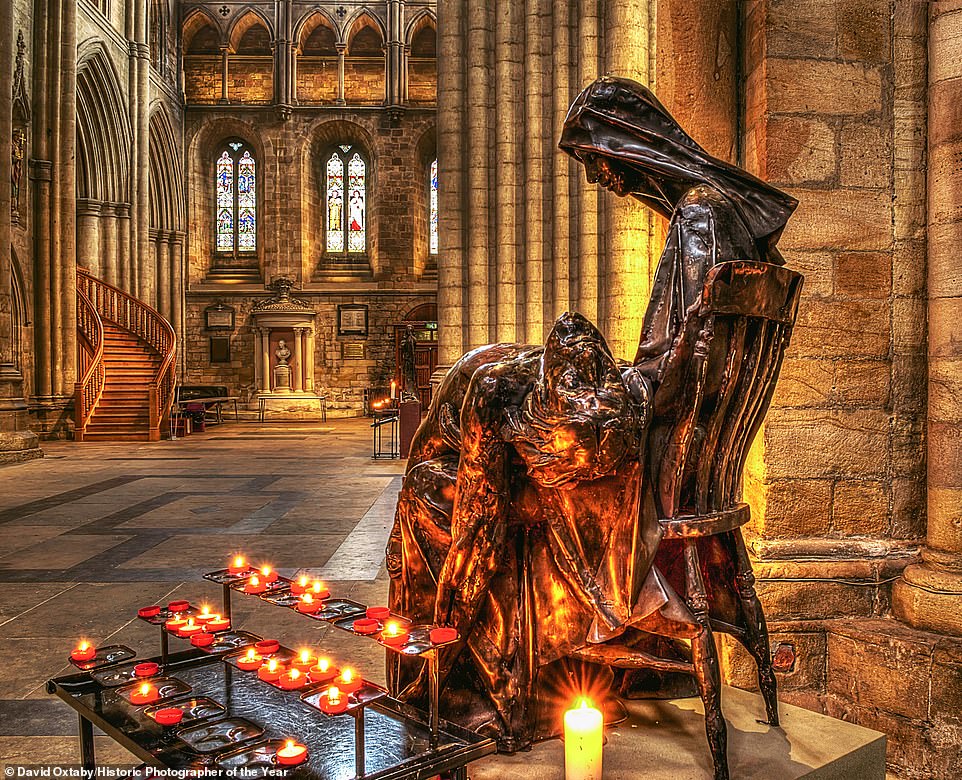 This beautiful image, also taken by David Oxtaby, shows the interior of Ripon Cathedral in North Yorkshire, which was built between the 13th and 16th centuries 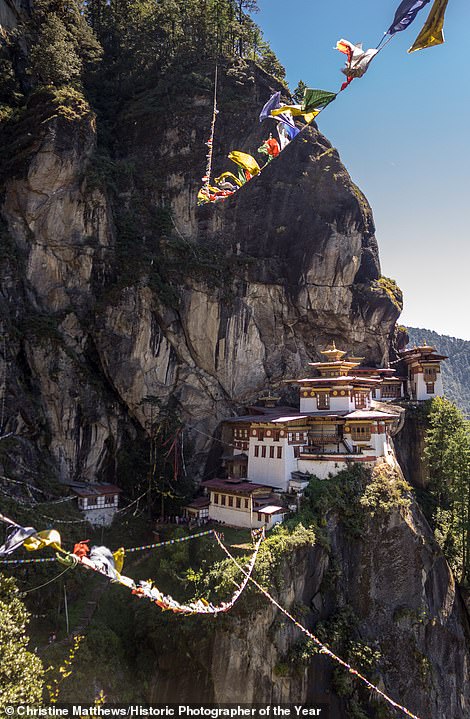 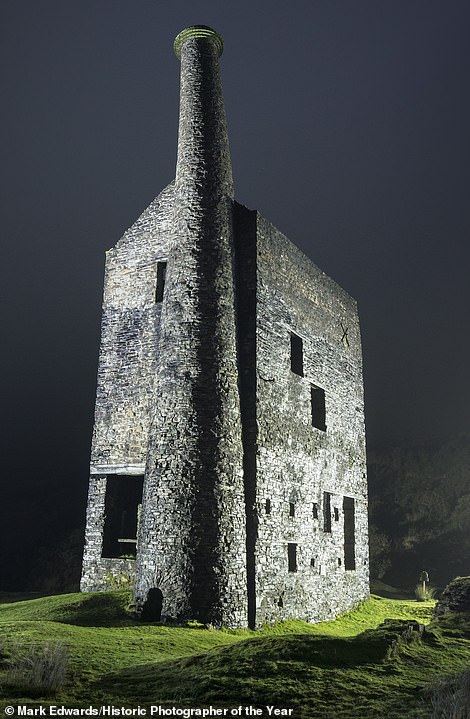 On the left is a jaw-dropping shot of the remote 17th-century Tiger’s Nest monastery in Bhutan, which was taken by Christine Matthews while on a seven-hour hike. On the right is an atmospheric shot of ‘Wheal Betsy’, an old tin mine on Dartmoor. It was taken by Mark Edwards, who said: ‘It was shot at night using torches to illuminate the building. As I took a number of shots, the mist started to roll in, which added to the atmosphere’ 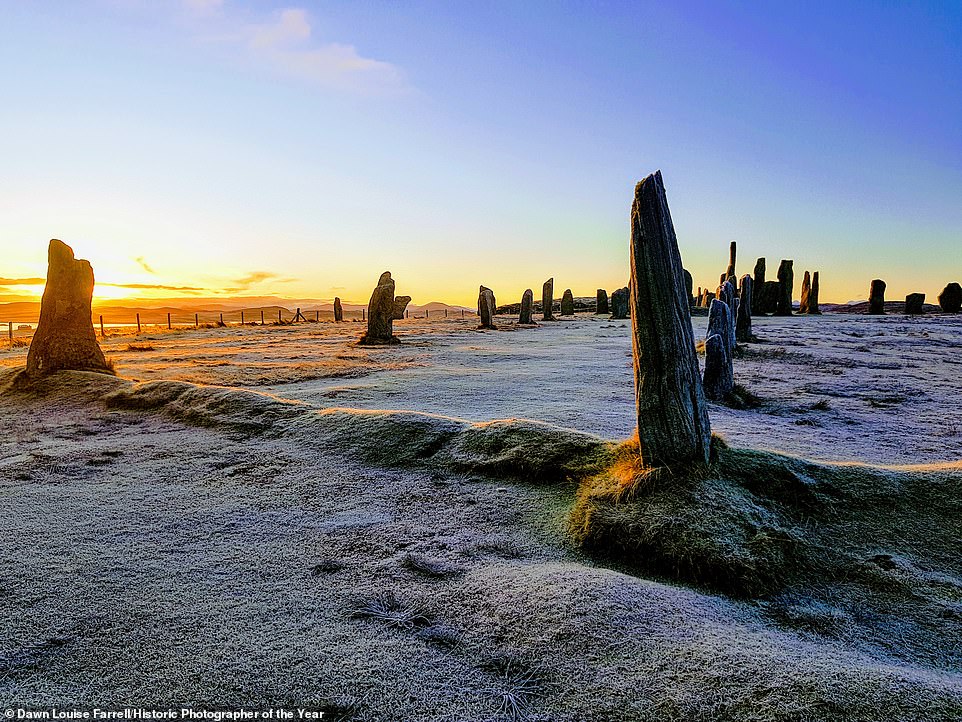 Dawn Louise Farrell snapped this incredible image of the Callanish Standing Stones on the Isle of Lewis at sunrise, just days before the winter solstice 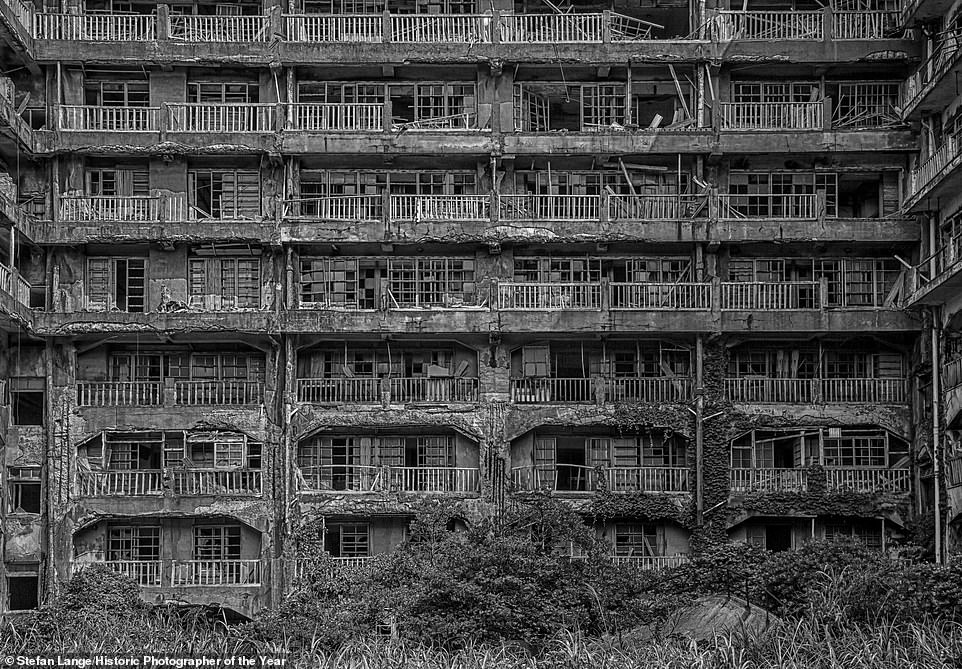 This haunting image shows a rotting apartment block on the abandoned Hashima Island off the coast of Nagasaki in Japan. It was taken by photographer Stefan Lange, who said: ‘In 1887, Mitsubishi acquired this small island that sat on top of a coal seam. Over subsequent decades, it would grow into an offshore metropolis with, at its peak, a community of over 5,000. Then in 1974 when the coal seam was almost exhausted, the mine was closed and the people left just as suddenly as they had arrived 87 years before. This typhoon-battered landscape is all that remains’