A bombshell indictment document uncovered by DailyMail.com details the pedophile past of one of Robert Mueller’s key witnesses.

George Nader – a ‘co-operating witness’ in the investigation into Donald Trump’s alleged collusion with Russia – was thrust into the limelight after giving evidence to the special counsel as part of his probe into Russian meddling in the US election.

Nader is known to have met Trump at least once and had a close relationship with a key fundraisers for the president.

But shortly after the Lebanese-born political adviser was linked to the probe it emerged he is a convicted pedophile.

Now DailyMail.com has unearthed a more than 30-year-old document alleging Nader was found with a stash of child pornography while living in Washington DC in 1984.

The document dated January 29, 1985 states that Nader was brought up on two charges – mailing obscene matter and the importation of obscene matter.

It states that between March 27 and April 12, 1984 Nader mailed an envelope containing copies of ‘obscene, lewd, lascivious and filthy magazines, pictures and films, commonly known as ‘child pornography’.’

Co-operating: Pedophile George Nader is now a key part of the Russia collusion probe but DailyMail.com has found the more than 30-year-old indictment laying bare his twisted past 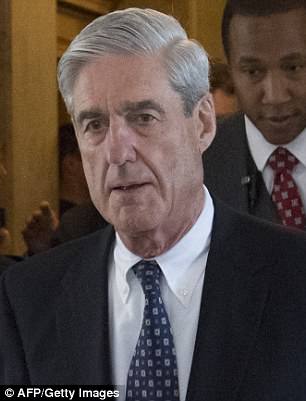 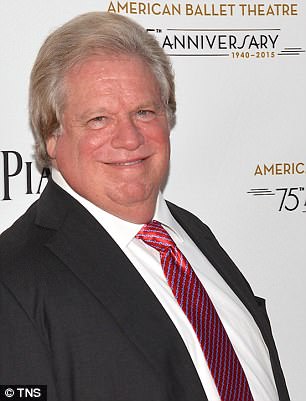 Targeted: Robert Mueller’s probe had George Nader stopped when he landed in Washington D.C. on his way to Mar-a-Lago. He was served with a subpoena and a search warrant. Top Trump donor Elliott Broidy (right) wrote Nader a detailed memo of a private meeting with the president in the White House which was later leaked, showing Nader’s level of access

And in a second charge the indictment, signed by the US District Attorney for Washington DC, stated that Nader was accused of ‘knowingly’ bringing the material into the US.

A grand jury was sworn but the case failed, apparently over problems with a search warrant that led to the discovery of the material.

He was convicted in federal court in Northern Virginia in 1991 on a felony charge of transporting sexually explicit materials in foreign commerce – importing child pornography from overseas.

And a Czech Republic court sentenced him to a year in prison in 2003 for 10 cases of sexually abusing minors between 1999 and 2002.

In one case, Nader asked for oral sex from a 14-year-old boy in a hotel room at the Hilton in Prague.

When the boy refused, Nader masturbated in front of him and paid him 2,000 koruna, equivalent to around $100 today, a court official told the Associated Press.

The political adviser’s lawyer, Sandeep Savla, has suggested details of his past had been leaked on purpose to intimidate his client.

‘This is nothing more than an orchestrated, disgusting scheme by those who are trying to intimidate Mr. Nader into silence. It won’t work,’ he said. ‘Mr. Nader will continue to answer truthfully questions put to him by the special counsel.’ 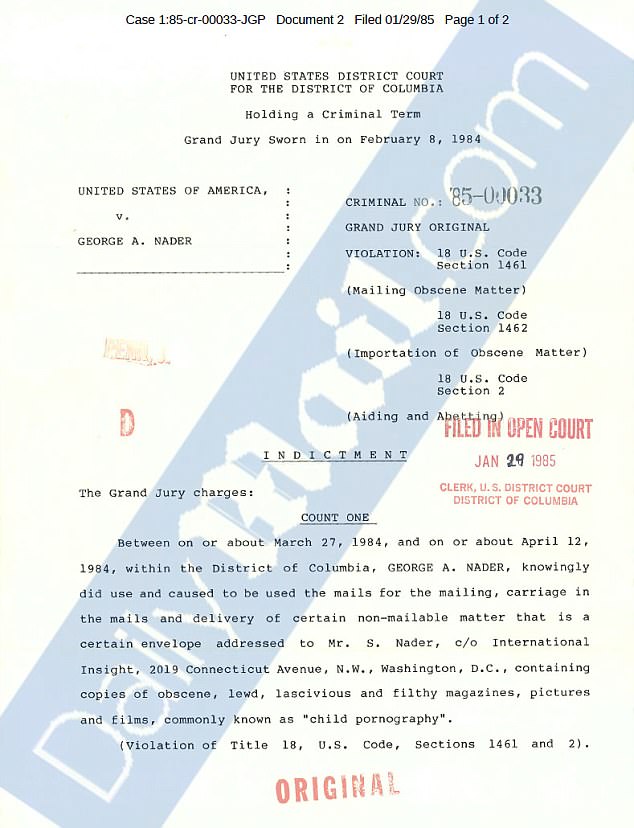 Nader was allegedly both a paid adviser for the United Arab Emirates and had close ties to the Trump administration.

He became a co-operating witness with the Mueller probe when he was stopped and served with a search warrant and a subpoena when he flew into Washington in January on his way to visit Trump’s Mar-a-Lago resort.

Investigators seized his phone and he was hauled in front of Mueller’s team.

Prince claims the meeting was set up in the Seychelles to discuss counter-terrorism efforts with the Emiratis – despite the security contractor already living in Abu Dhabi near to Mohammed bin Zayed, his ministers and advisers.

Prince also told congress that he met Dmitriev there in a bar by chance.

But Nader is understood to have told the special counsel that the meeting was in fact brokered by the UAE to set up a back channel between Trump and Putin.

It has also emerged that the political operative even had access to information coming from the Oval Office itself, according to leaked documents.

Top Trump donor Elliott Broidy wrote Nader a detailed memo of a private meeting with the president in the White House which was later leaked.

In the memo, Broidy said he lobbied Trump to increase military cooperation with the UAE and fire secretary of state Rex Tillerson.

Nader, who holds Lebanese and U.S. passports, spends much of his time in the United Arab Emirates, according to his lawyer.

He said that claims revealed by DailyMail.com last week that he had ‘fled’ to the country were untrue and that Nader was on a planned trip back there and had since returned to the United States in line with previous plans.

Nader has operated for years as a conduit to the Middle East. He has claimed that he moved from Lebanon to the US with scant English aged just 15.

‘The consulate didn’t think I stood a chance of remaining in the States on my visitor’s visa,’ Nader told the Lebanon Daily Star in a 2000 interview. ‘I was just a Lebanese teenager with not a word of English.’ 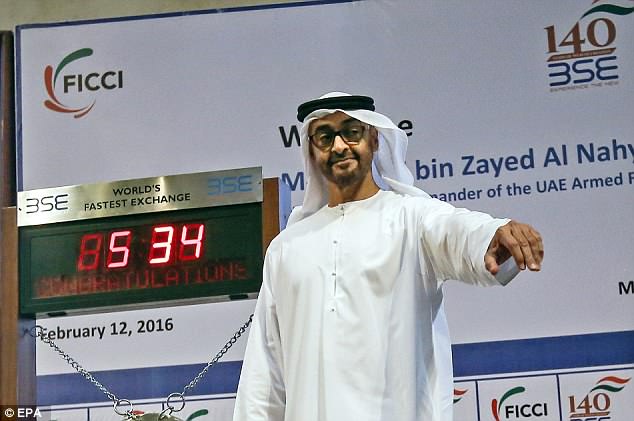 Key figure:  Nader has told the special counsel that he set up a meeting in the Seychelles attended by Prince Mohammed bin Zayed, de facto joint ruler of the United Arab Emirates, Erik Prince, the mercenary billionaire, and Russian banker and friend of Putin, Kirill Dmitriev. He has told Mueller’s team that it was an attempt to set up a back channel between Trump and Moscow 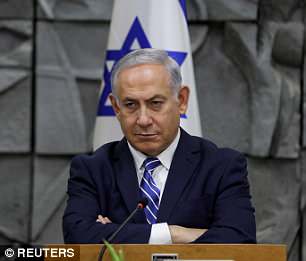 Though his magazine was put together in his basement and had a small circulation of a few thousand, Nader had a surprising level of access to leaders in the US and the Middle East.

Presidents Bill Clinton and George Bush Sr gave exclusive interviews to his publication while in office, and Nader met and interviewed Ayatollah Khomeini of Iran in 1987 – after which he is thought to have been debriefed by the CIA.

Former employees at the magazine said they were suspicious that it was being used as a front for intelligence operations.

Raymond Stock, assistant editor at the magazine in the 1980s, said his former boss was a ‘mysterious figure’.

‘There were rumors at the time I worked with him that he was with the intelligence agencies,’ said Stock, who is now a lecturer at Louisiana State University.

‘I could never tell exactly who was bankrolling him or exactly where he came from,’ he added. ‘I never really understood his modus operandi even though I worked with him.

‘What might lead one to believe he was involved in intelligence work, was that he was so close-mouthed about everything.

‘He actually would send me to places, for example he sent me to Morocco for a month, and he didn’t want to use the article I wrote. He just wanted to establish a relationship with the government of Morocco and he used me to do that. It was a state-sponsored trip.

‘He did the same with Iraq. He asked me not to pursue articles in Iraq. He wanted me just to talk about what I saw there. So that also made me wonder if it was intelligence work.’

Another employee who worked at the magazine during the 1990s, said Nader would often change his phone number and use code names for his contacts.

‘People had code names when they called, it was really outlandish,’ said the former writer, who asked to remain anonymous. ‘One would say “I am the gentleman from New York”, and you’d have to patch him through.’

Claims of Nader’s work with the UAE are not the first time the Washington consultant has been exposed as being at the center of high-level foreign policy machinations.

Intriguingly, Nader also facilitated secret negotiations between Syrian leader Bashar Al Assad and Israeli prime minister Binyamin Netanyahu during a diplomatic crisis in 1998 over the disputed area of the Golan Heights, a strategic mountain range claimed by both Syria and Israel.

The talks, revealed in a July 2017 book by author Daniel Pipes, were highly secretive and known only to the highest levels of the US administration.

Nader acted as a go-between for Netanyahu and Assad, coming close to an historic deal before the talks broke down, according to Pipes. Access: Both George H.W. Bush and Bill Clinton gave Nader’s tiny magazine interviews while they were in office

He represented Assad’s views, while his partner in the talks, US businessman Ronald Lauder, represented Netanyahu.

Lauder, now president of the World Jewish Congress and heir to the Este Lauder’s cosmetics empire, has been friends with Trump for around 50 years. In a recent speech Trump declared: ‘I want like to thank Ronald Lauder… for his many years of friendship… he truly has been my good friend.’

Nader told the Lebanon Daily Star in 2000: ‘[Middle East Insight] aren’t here to be a spokesperson of the US position, but to present all the issues and to cross all lines.

‘It has always been my interest and agenda to portray the issues in the Middle East with fairness and from every angle possible.’ he said. ‘To present the public with pro-Arab and pro-American and pro-Jewish sides. To get the whole picture.’

He told the Star his magazine was non-profit and without state sponsorship, relying on donations and corporate funding.

He hosted a dinner at the home of a former Bill Clinton adviser in 2001 for the then Israeli foreign minister Shimon Peres, where he met members of congress and US diplomats, according to a report to the Washington Times.

At one point during the evening, former president Clinton called the gathering on the kitchen telephone.

Company records show that the Washington-based company Middle East Insight Inc was dissolved the following year, and its non-profit parent company registered in Ohio was shut down in 2015 for failing to file documents with the state bureau.

The former Middle East Insight writer said they had an article due to run in the magazine in 2002 when it ‘just disappeared’.