There are more than six million privately owned businesses in Britain, ranging from restaurants to independent financial advisers and from fashion brands to pet groomers.

While many will sell similar products or services, others may have a more unique offering and these types of businesses have been launching aplenty over the past 12 months to cater to new pandemic-induced trends.

We have showcased a raft of new brands born recently from a platform selling DIY meal kits to a gift box especially for furloughed workers and a wine bottle designed for socially distanced drinking in the park.

But what if you have a great idea for a business or product, and somebody else has the same idea? What if their offering is suspiciously similar to yours? What if you think your idea has been copied?

There’s an old adage that states imitation is the sincerest form of flattery. But chances are if your business offering has been copied, you’re going to be more annoyed than flattered.

As a general rule, if you have spent time and money in developing a new business or product you should be thinking about protecting it from competitors.

This is Money spoke to a number of intellectual property experts about how to do this.

What is intellectual property?

Intellectual property is something that you create using your mind – for example, a story, an invention, an artistic work, or a symbol.

Having the right type of intellectual property protection helps you to stop people taking or copying the names of your products or brands, your inventions, the design or look of your products, and the things you write, make or produce.

Carys Thompson, a partner at law firm Keebles, said: ‘Copyright protects the physical expression of an idea, not the idea itself, and does not prevent someone else independently developing the same one.

How do you protect your ideas?

When discussing ideas with potential competitors it is advisable to do so under a non-disclosure agreement.

This is essentially an agreement that the company you are talking to will not use any confidential information it receives for its own purposes or to benefit anyone else.

Steve Farmer, a partner at law firm Pillsbury, said: ‘It is also advisable for the company sharing information to seek to register any intellectual property rights it may have in its product or idea, where possible.

‘This should be done before going to market. The company should also limit the amount of information it discloses in commercial discussions to the minimum necessary to strike a deal.’

A confidentiality agreement can, however, fail if the information is already in the public domain or obvious, which a competitor may try to argue in a bid to get past the agreement.

For that reason, you should also look to include a clause saying the company will not for a defined period of time-release any products which are similar to the one that is to be discussed.

Richard Riley, of Slater Heelis Solicitors, said: ‘It is a frustrating minefield for small business owners who have invested significant sums of money in research and development of new products only to have their ideas duplicated.

‘That is why it is so important to consider what steps you can take effect prior to negotiations and meetings.’

What to do if someone has copied your idea

Under English law, whether copyright has been infringed depends on whether a substantial part of the original has been copied, which is decided individually in each case.

If someone copies the whole of a copyrighted work, clearly there will be infringement. Often, however, the position is not so clear-cut.

Farmer said: ‘When establishing whether any potential copying is of a ‘substantial part’, the test is qualitative, not quantitative.

‘In some cases, only a small part of the earlier work in terms of quantity needs to be copied for a copyright claim to succeed if, for example, significant skill and labor went into creating the part that was copied.’

Where an intellectual property right is infringed, the claimant can typically seek a range of ‘civil remedies’ against the infringer, such as an injunction that they stop copying and using the property, or that any copied items be seized or forfeited.

Farmer added: ‘A claimant who succeeds in proving an infringement can also choose to pursue either an account of profits or an inquiry into damages.

‘Damages are intended to put the claimant in the position it would have been in if the infringing act had not occurred, in terms of any lost profits or costs, while an account of profits is intended to make the defendant give up the profits it has made as a result of copying someone else’s protected work.’

What if the ‘copycat’ is a big corporate?

Unfortunately, larger corporations copying the ideas of smaller businesses is a common occurrence, but it can be extremely difficult to prove and even if this can be done, it is often within the law.

Discount store Aldi is well-known for its ‘lookalike’ own label products, that play on customers’ familiarity with the real thing. The company does, however, comply with UK copyright infringement law.

Giovanni Visintini, the intellectual property consultant at LawBite, said: ‘Once a new product is presented and the relevant information is disclosed, another company has pretty much freedom to copy the idea.

‘This puts small businesses in a very weak bargaining position, should they want to sign a contract with a supermarket for example, but at the same time, they cannot reveal their secrets.

‘Fighting a big company is worth it if you have a strong case, so get a specialist lawyer on board to review the case.

‘The big secret about big companies is that they do not have unlimited budgets to fight every fight, so a settlement is always on the table.’

Top tips for protecting your IP

Some products are more ‘protectable’ than others, such as those that are complex or have a unique inventive feature.

It all depends on how easy it is to replicate the product and whether there are already similar products on the market. However, there are ways for small businesses to have some protection.

We saw a meal similar to our dishes

Plant-based food company Pollen + Grace’s owners were disappointed when popular retailer Marks and Spencer didn’t follow up on their interest in their brand.

But they were then frustrated when the high street giant launched a new meal, they believed was remarkably similar to one of its signature dishes.

Co-founders Kristina Komlosiova and Stephanie Johnson said they met the M&S food trends and product development teams at an event in October 2019, who then emailed them asking to keep in touch and with a suggestion that there may be opportunities to work together in the future.

‘We obviously pursued the relationship as we believed this was a dream opportunity for our products to be stocked in M&S stores so we arranged for a batch of our product samples to be sent to the product and buying teams,’ said Kristina.

‘The samples we sent included the Super Kale + Black Rice Immunity Box as this is one of our oldest and best-selling recipes.

‘We had been trying to establish a relationship and get a listing at M&S ever since but have largely been ignored.

‘I am sure you can imagine our shock and disappointment when we saw M&S launching a replica of one of our signature products one year later.’

M&S launched its Eat Well range last month, with one of the meals, called the ‘Buddha Bowl’. Kristina claims this dish looks exactly like Pollen + Grace’s signature offering and its description is also similar.

‘Hearty portobello mushrooms with black rice, squash and kale and a vibrant turmeric and yogurt dressing’ (description on website) 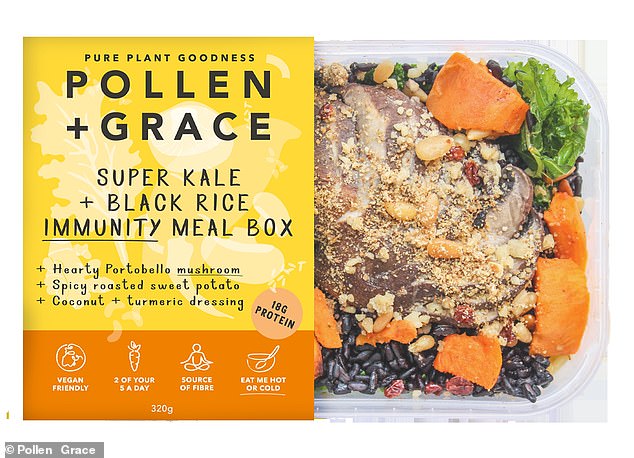 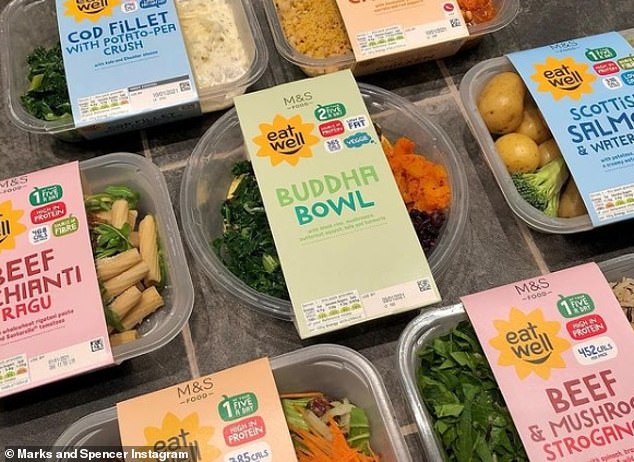 M&S launched its Eat Well range in January 2021, which includes the ‘Buddha Bowl’, which Pollen + Grace claims is a replica of their Super Kale + Black Rice Immunity Box

Kristina said she has also tried the M&S product and that it is ‘absolutely undeniable they have tried to reproduce our Super Kale + Black Rice Immunity Box’.

She added: ‘This kind of copycat behavior is not OK and it needs to be called out. As a small, independent, female-run company, we need to highlight this kind of behavior from the giants.’

This is Money contacted M&S for a response. A spokesperson said: ‘All of our recipes are created by our team of chefs, culinary experts, and nutritionists.

‘For our Eat Well range we use on-trend, healthy ingredients and have our fingers on the pulse – but we always lead in terms of innovation, we don’t follow.

‘We are also big supporters of smaller producers and work closely with many artisanal suppliers.’

It’s not that simple: what the experts say

Richard Riley, of Slater Heelis Solicitors, said: ‘Unfortunately, in the food sector recipes or dishes are notoriously difficult to protect and the traditional legal options do not generally fit well with them.

‘While copyright law may protect the expression of the written recipe (i.e. the step-by-step guidance to create a dish) it will not protect the idea or concept of the recipe or dish itself or its taste.

‘In theory, a recipe could be protected by a patent but this is an expensive form of protection and you would essentially need to show that no one else has ever used the recipe or dish and that it would not be an obvious one for chefs or food product developers to create.

‘This is quite a high threshold to meet so people generally do not apply for patents for recipes but if you developed a new food item, for example, a new type of meat substitute suitable for vegans, or a new method of manufacture then that might be patentable and worth the initial investment for a patent.’

Keeble’s Carys Thompson added: ‘A passing off action may be possible if the small business can establish all of the following:

She said: ‘An action in passing off may be brought by anyone who has generated goodwill by trade with consumers in the UK, but this can be a difficult hurdle for new businesses and/or new products to overcome.