The Inspector checks in to The Relais Henley, Henley-on-Thames, following a £3million refurb

The Red Lion, by the bridge in Henley-on-Thames, was down in the dumps for years.

But, along came hotelier Grace Leo and her co-owner Tim Hartnoll, a Singapore-based shipping magnate, who between them have spent some £3 million on the place. It opened just before this year’s Henley Regatta.

It’s a work in progress, with just 20 of the 40 rooms up and running. Various parts of the Oxfordshire hotel — renamed The Relais Henley — still need a lick of paint, including the bannisters, while the courtyard is a building site.

The Relais Henley, formerly The Red Lion, has underdone a major refurbishment

Better, surely, to keep prices low in the circumstances. But I’m paying the full room rate of £230 B&B for a non-river view room — although I’m upgraded to a river view that usually costs £380.

It’s delightful, with high ceilings, a modern L-shaped sofa and huge bed. But the tiny bottles of single-use shower gel and shampoo are mean, and there’s absolutely nowhere to put them in the shower except on the floor.

At these prices, you might also expect fresh milk rather than those plastic long-life jobbies.

Staff all wear regatta jackets (much of the bold stripes decor is inspired by rowing club blazers) and are unfailingly efficient. The friendly general manager used to be the number two at Sandy Lane in Barbados.

The crew of Mosimann’s in London has been invited to oversee the Clipper Restaurant, while the Quarterdeck Bar at the front of the building has been greatly improved while retaining the original 15th-century woodwork.

No one except me is dining in the restaurant, which must be worrying. The room is pretty, with bare brick painted white, tangerine banquettes and a polished wooden boat hanging from the ceiling. But the tables are small and far too close together. 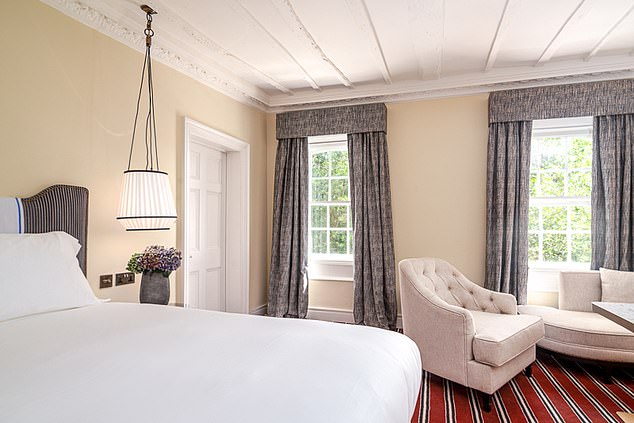 Delightful: Currently 20 of the 40 bedrooms are operational. Pictured is one of the rooms 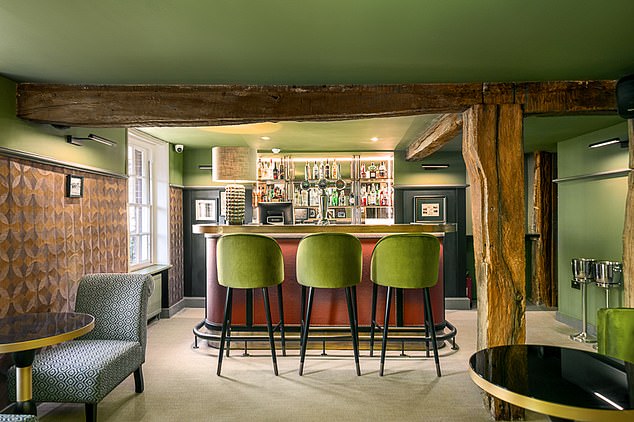 Pictured is the Quarterdeck Bar with its original 15th-century woodwork

My Caesar salad with smoked salmon is terrific, as is my entrecote steak, and wines start at a reasonable £24 a bottle.

Those tiny tables are hopeless in the morning once a large pot of tea joins the party — and the tea bag comes in an individual sachet placed on a saucer.

Relais Henley is a rebranding exercise in its infancy. It needs to be given time, but in this business that can be an expensive luxury.