Comments made by Democratic candidate Marianne Williamson led to her becoming the biggest internet hit of the evening following Thursday night’s Democratic debate.

The 66-year-old from Houston, Texas was relegated to the outside left podium but got her chance to speak when she jumped into an argument about healthcare policy.

Williamson may have spoken for only five minutes during the debate, but what she said caught the imagination of those tuning in, with memes cropping up at a rate of knots and giving late night hosts plenty of new material.

Williamson was asked how she would lower the costs of prescription drugs to which she dismissed the other candidates’ health policy positions as ‘superficial fixes’ and said that President Donald Trump won without a plan just by repeating ‘Make America Great Again.’

She went on to say that Democrats need to ‘go deeper’ and that ‘chemicals’ are to blame for many health problems in the U.S. 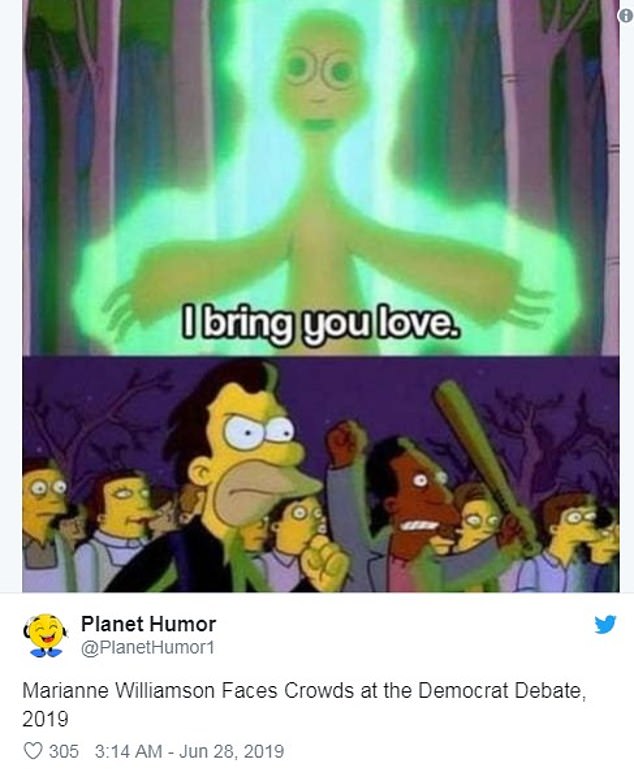 Singer Katy Perry showed empathy for Williamson, writing: ‘not gonna lie i sound like Marianne Williamson after a few glasses of red’ 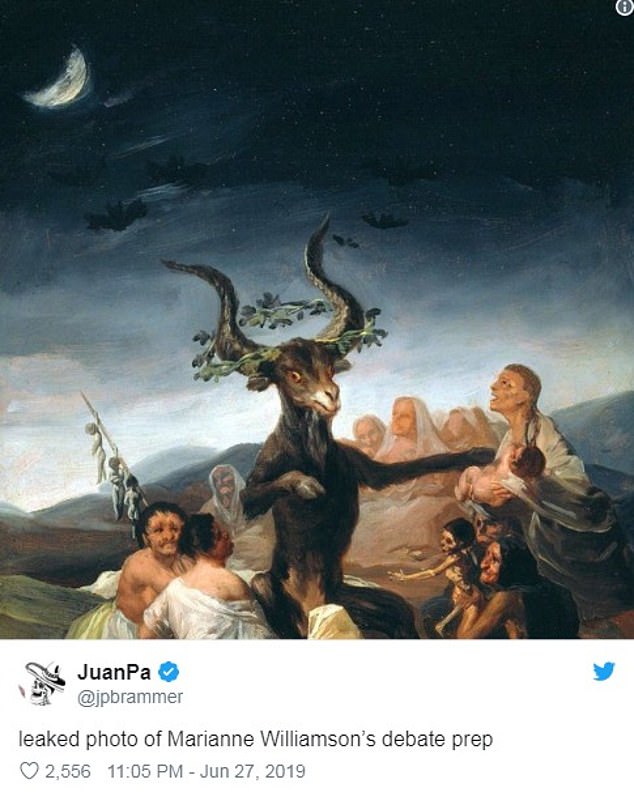 Late-night host Trevor Noah had his own take on Williamson’s comments.

‘I was just waiting for her at some point to be like, ‘We don’t need a plan, my friends. Just give me one vial of CBD oil and our chakras will be aligned,’ Noah joked.

In perhaps her most memorable moment, Williamson declared that her first act as president would be to call the Prime Minister of New Zealand and declare the United States a better country to raise children.

‘Girlfriend, you are so on,’ Williamson said she would tell Prime Minister Jacinda Arden, who has said that New Zealand is the best place in the world to raise a child.

In her concluding statement, Williamson declared that she was going to ‘harness love for political purposes’ to defeat Trump.

Jessica Shortall tweeted: Crying laughing. I’m sorry but what. Marianne Williamson is like if GOOP became a person.’

Alongside pictures of the Care Bears, @RogueRachael added: ‘Marianne Williamson is the only candidate proposing to beat Trump using the Care Bear Stare!’ 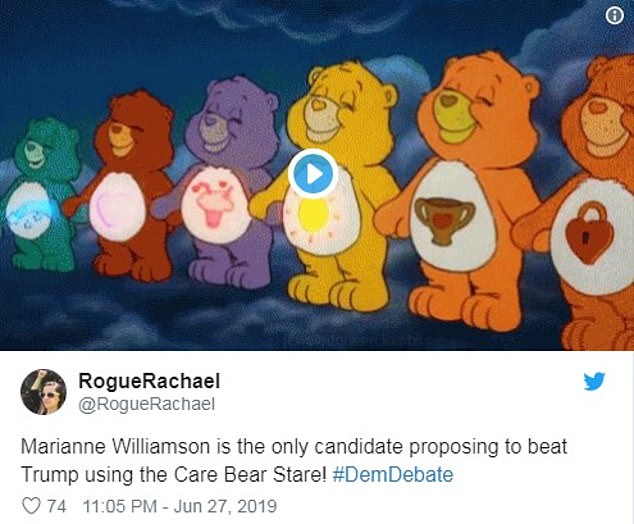 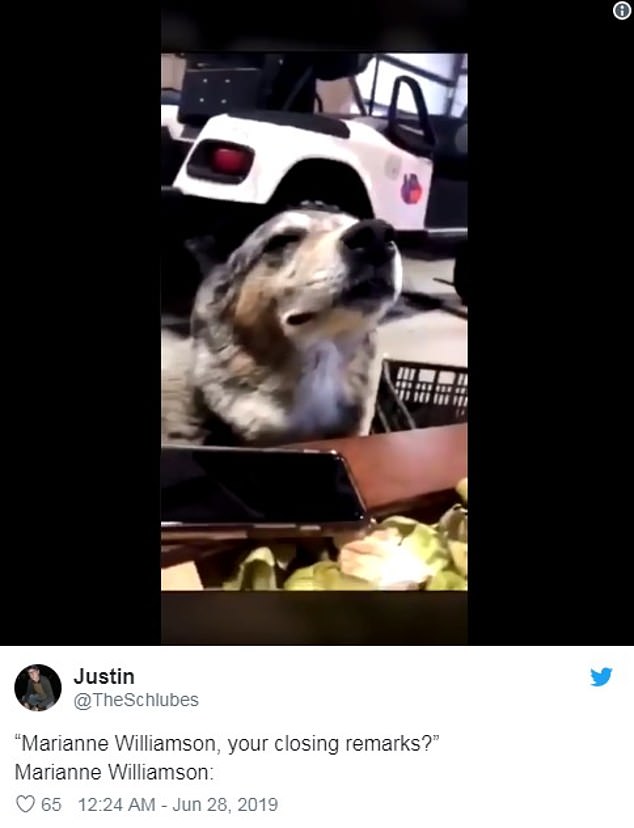 In her concluding statement, Williamson declared that she was going to ‘harness love for political purposes’ to defeat Trump 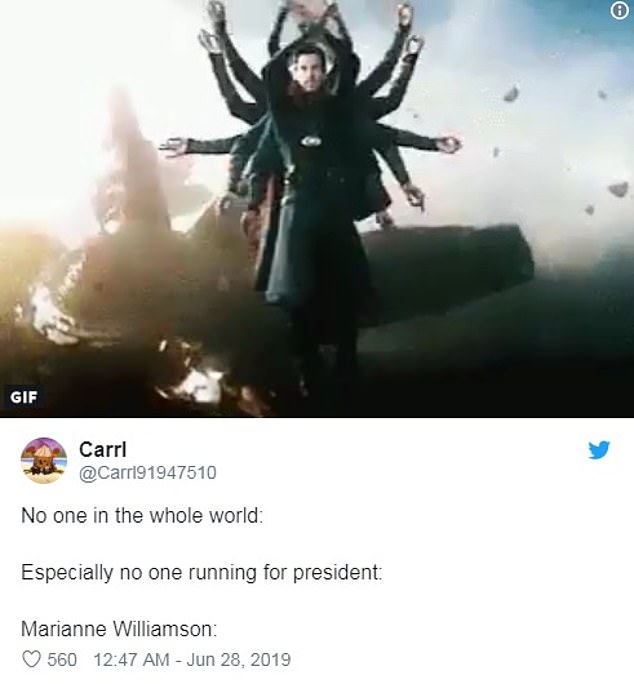 Regarded as a long shot, Williamson still qualified for Thursday’s debate after attracting 65,000 individual donations and registering 1 percent support in three polls, as reported by the Washington Examiner.

Williamson is a practicing Jew who says she experienced a spiritual awakening in her 20s after reading A Course in Miracles, a three-volume work that teaches acceptance of God’s plan as the key to achieve miracles and happiness.

In 1992, she published her first book, A Return to Love and went on to become a New York Times best-seller. Other best-selling books include ‘Politics of Love.’

Williamson has attracted the admiration of a number of celebrities and has been called Oprah Winfrey’s ‘spiritual adviser’ and appeared on Gwyneth Paltrow’s Gloop podcasts. 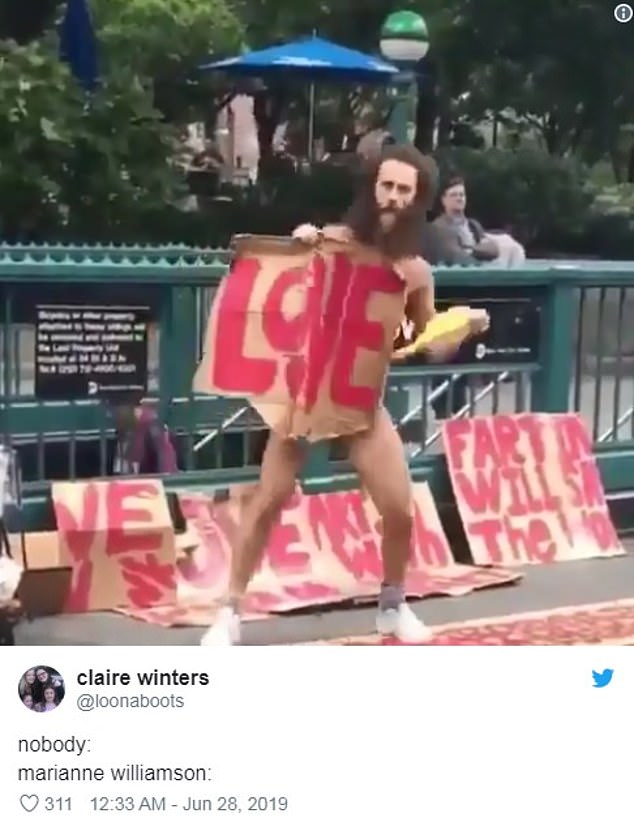 Williamson made an unsuccessful run for Congress in 2014.

She is the co-founder of the Peace Alliance, an organization dedicated to restoring peace to national discourse and foreign policy.

Williamson has talked about creating a Department of Peace.

Recently she courted controversy after she called vaccine mandates ‘draconian’ and ‘Orwellian.’

Her signature campaign proposal is a call for $100 billion in reparations for slavery to be distributed over 10 years, though she has also thrown out $200 and $500 billion as possible reparations figures.

She’s also served as a counselor for HIV patients and brought up her 29-year-old daughter India on her own.