Single ladies of the five boroughs your prince has arrived. The catch: his throne is on Staten Island.

Pete Davidson, 27, has finally proved doubters wrong by moving out of his mother’s basement and into a modest, $1.2million, two bedroom bachelor pad within New York City’s favorite punchline.

The SNL comedian and star of The King of Staten Island’s decision to remain in his hometown has sparked fierce online debate: Why would the funnyman worth an estimated $6million and with a string of high-profile romances to Hollywood’s finest- Ariana Grande, Kaia Gerber- encamp on the much maligned, ‘forgotten borough’?

‘It doesn’t matter what it looks like, even if it were a mansion, he’s still in Staten Island,’ wrote one commenter. ‘It’s NY redneck-ville,’ said another.

Moving on up: SNL funnyman Pete Davidson, 27, purchased a luxurious high-rise apartment in his hometown of Staten Island, New York for a cool $1.2million. The move sparked fierce debate and left the internet divided over why the beloved casanova, with seemingly everything: money, star power and hordes of female fans chose to remain in his modest, working class hometown 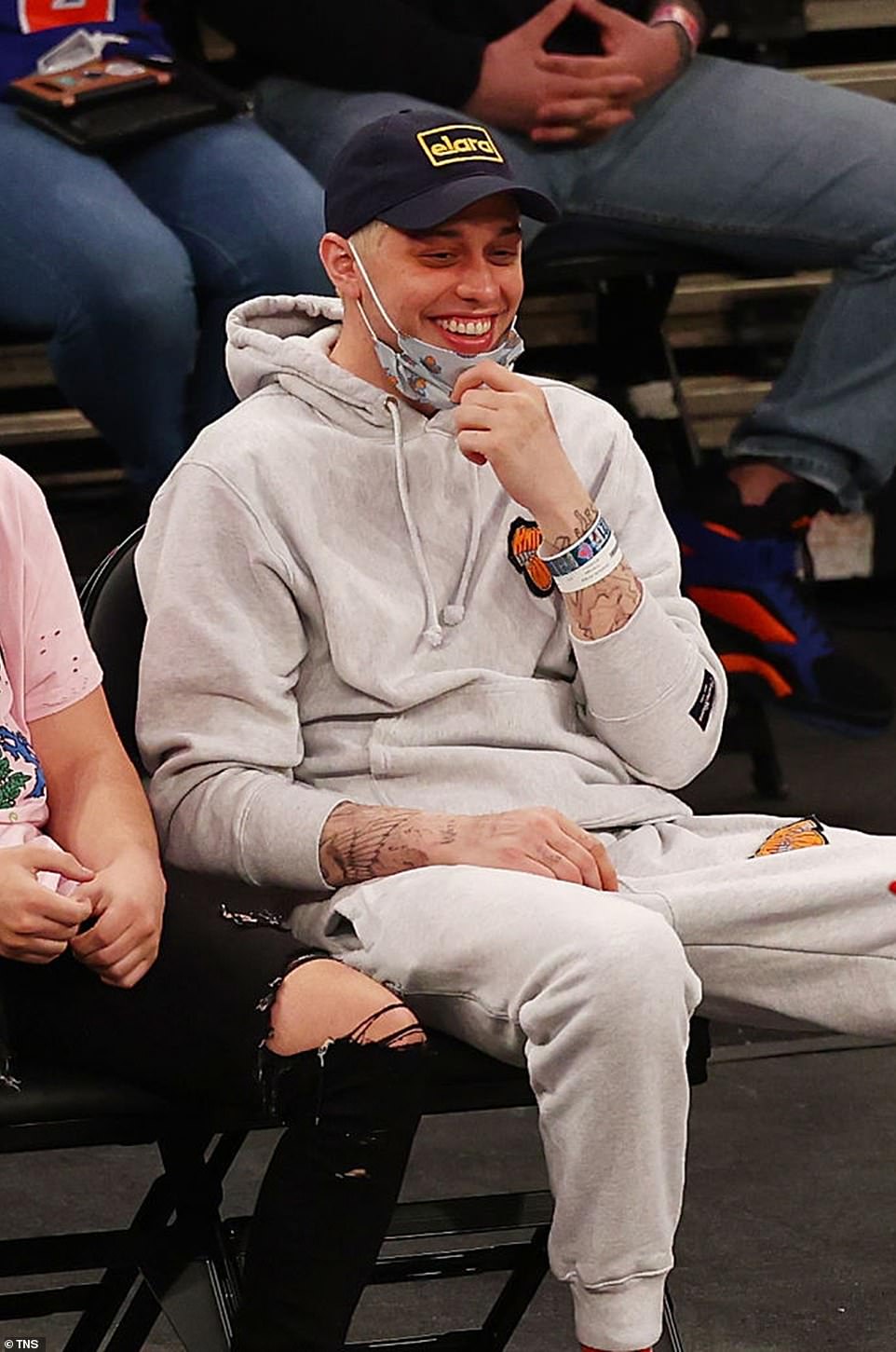 Big changes: The 27-year-old SNL comedian is seen courtside at a New York Knicks game in March 2021. He revealed to fellow SNL star, Colin Jost that he was planning on moving out of his mom’s basement in February: ‘The thing is my mom is a lot like this show. No matter what I do, I’m never asked to leave. Also, they’re both really old and noticeably fatigued’ 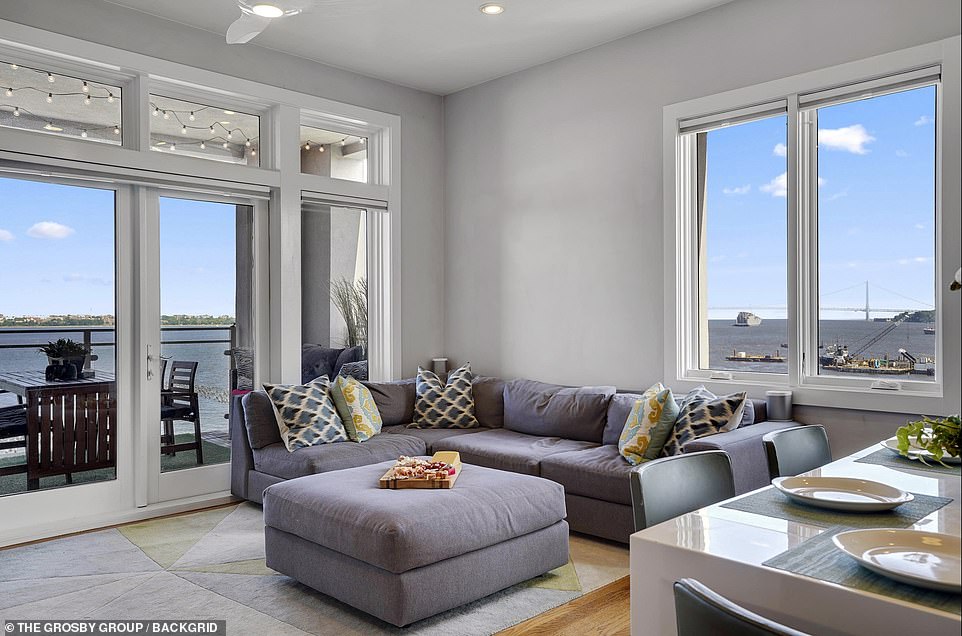 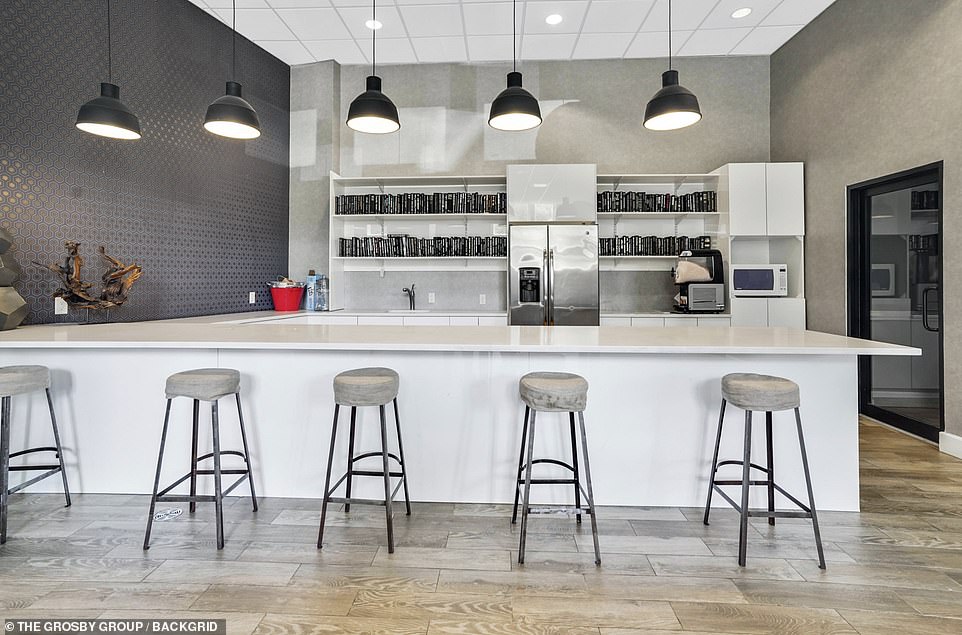 One friendly commenter wrote that the apartment seemed nice and cozy, ‘Not at all ostentatious and very livable looking!’ While another remarked: ‘It doesn’t matter what it looks like, even if it were a mansion, he’s still in Staten Island’ 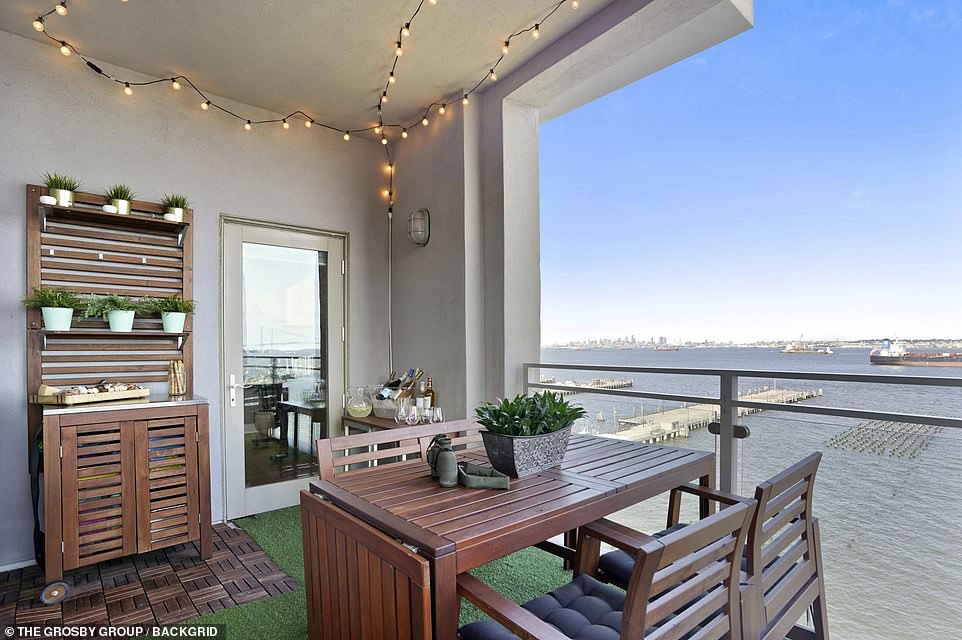 Congratulations are in order: The SNL comedian, long accused of being ‘man child’ has finally proved doubters wrong, much to the delight of his legions of female fans 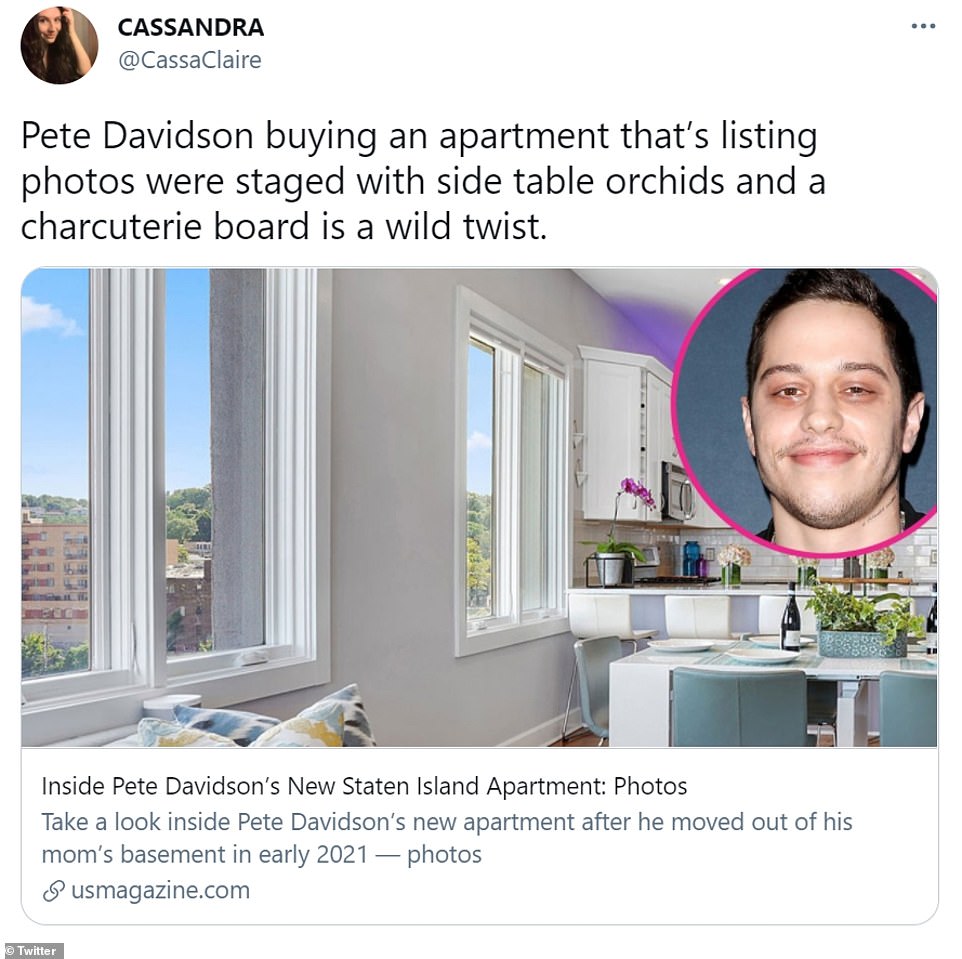 In the latest sign that ‘The King of Staten Island’ was nothing less than a biopic starring the subject himself, Pete Davidson revealed on TikTok that he finally made the move out from under his mother’s watchful eye into his own bachelor pad.

It comes as great news for the casanova’s legion of female fans. But the move has also left many scratching their heads over his decision to stick around Staten Island – the forsaken suburban wasteland forever marred by its reputation as a former landfill that breeds fist-pumping, orange skinned ‘Guidos.’

People who know little about Staten Island tend to know this much: It is a historical haven for mobsters (Paul Castellano’s former compound is a short drive from Vito Corleone’s home in the The Godfather), and it was also once the location of a 2,200-acre landfill that served as the city’s dump between 1948 to 2001. 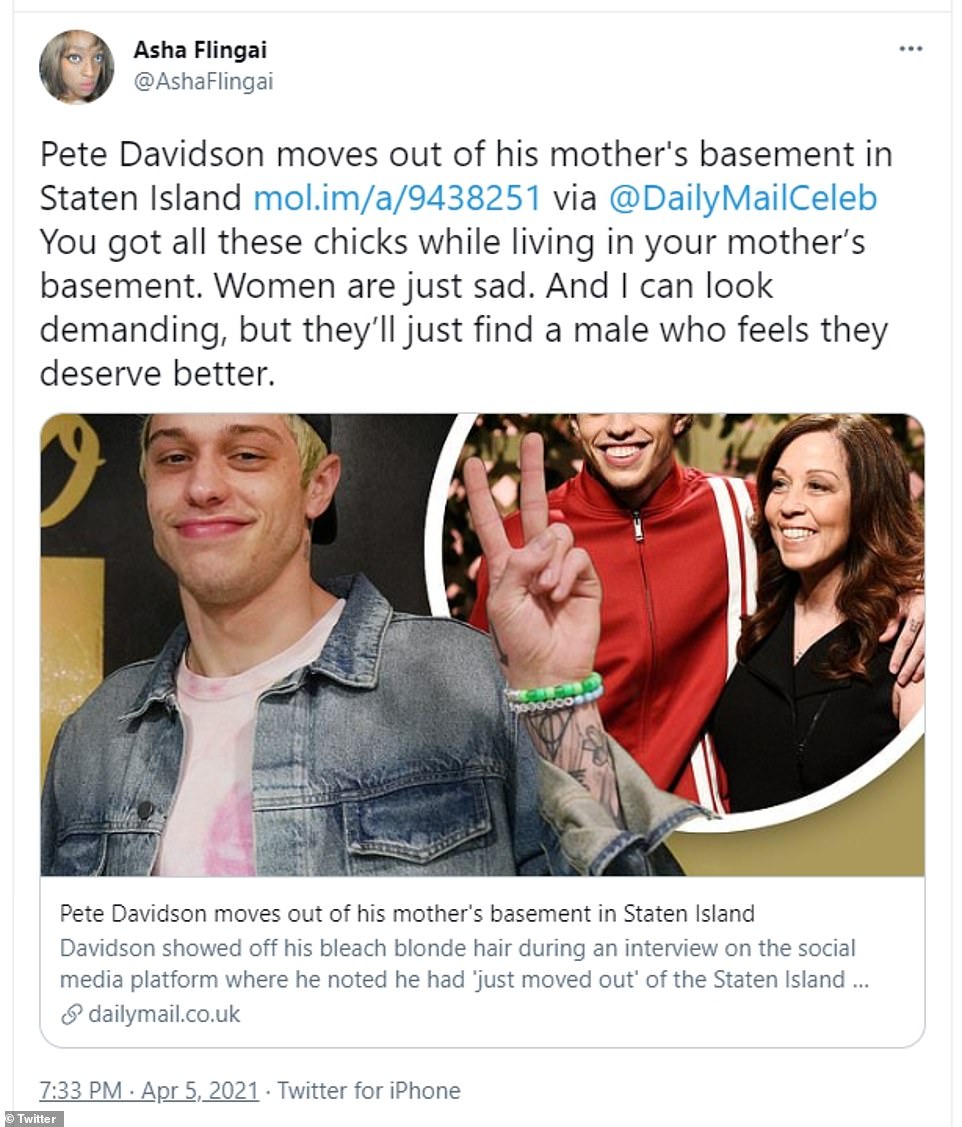 No love lost: The news sparked Twitter user, Asha Flingai to unleash a litany of complaints against Davidson, telling women that they ‘deserve’ better than someone who only just moved out of their mother’s basement 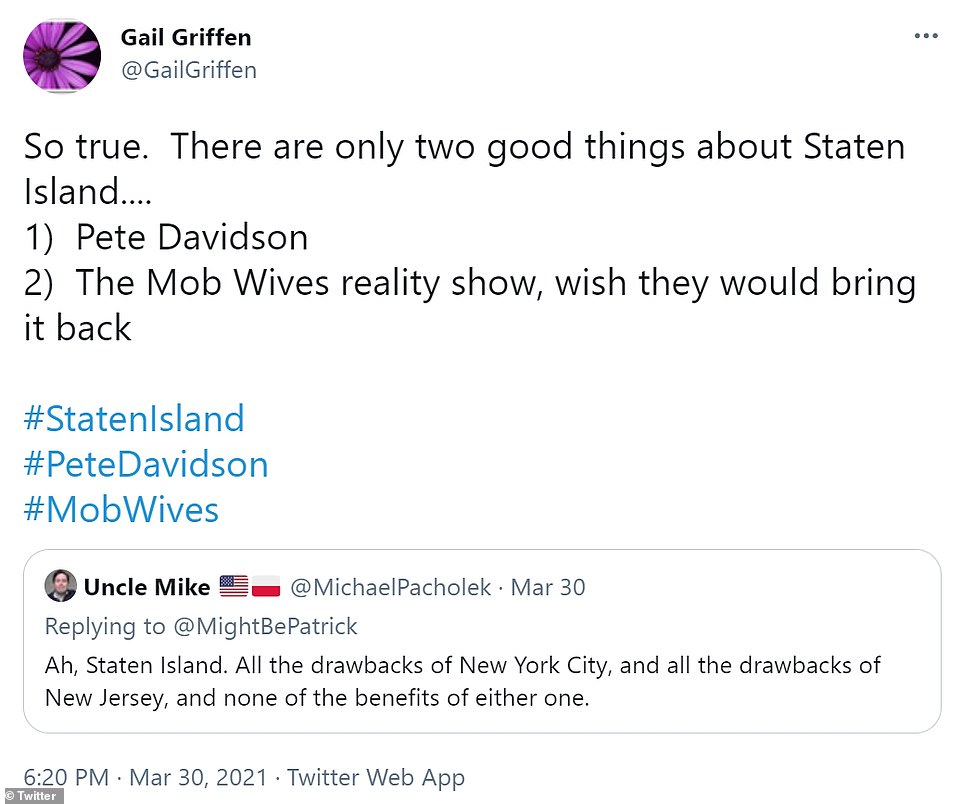 Staten Island is forever marred by its reputation as a former landfill that breeds fist-pumping, orange skinned ‘Guidos’ and defined by what some call a ‘suburban wasteland of nail salons and tasteless ornaments’

‘I wonder if the smell of weed will cover the smell of landfill methane,’ remarked one user touching upon Davidson’s storied drug problem.

The $1.2million apartment features luxury amenities, high-end finishes and panoramic views of Manhattan. It sits a stone’s throw from his mother’s Sopranos-esque mansion, which he purchased for her in 2016 for $1.3million.

While some complimented the high-rise apartment’s lofty ceilings and natural light, TallTulip wrote,’$1.2 Million apartment in Staten Island with a view of the BACK of the ‘Statue of Liberty’..??’

Another joked that the large windows will provide ample ‘waterfront views of the bodies floating by.’

Others dissected Staten Island’s notorious reputation, ‘LOL- nothing in Staten Island is worth 1.2 million. What a rip-off to live on that dump island, with crap views. Guess he can’t leave his mommy.’

‘I understand, it’s where he grew up, but it’s still Stagnant Island.’ 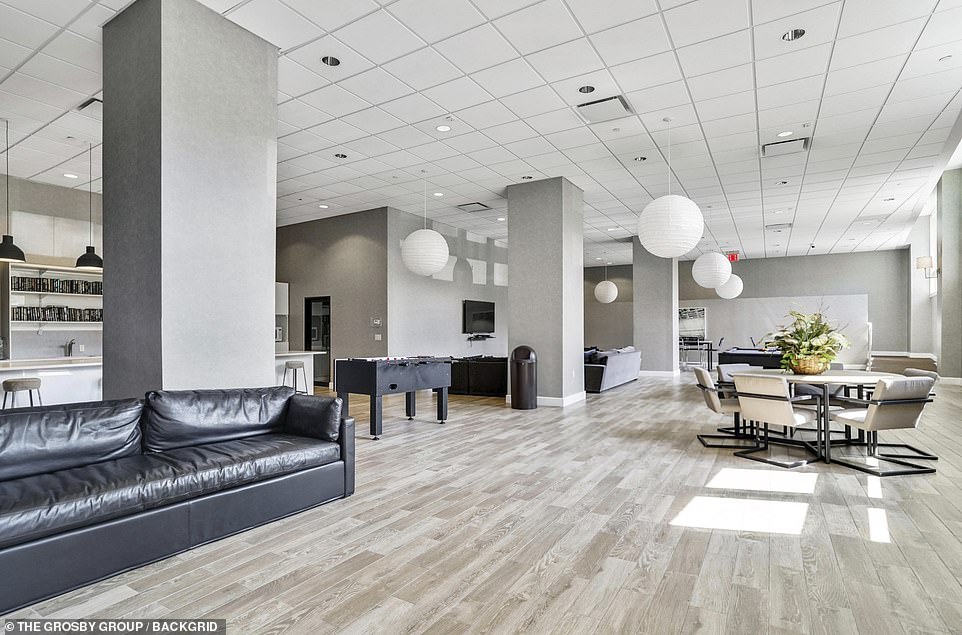 In an increasingly gentrified and sanitized New York City, Pete Davidson’s Staten Island high-rise will offer his glamorous girlfriends a refreshingly real look at the real city, the only problem for some is that it’s ‘too real’ 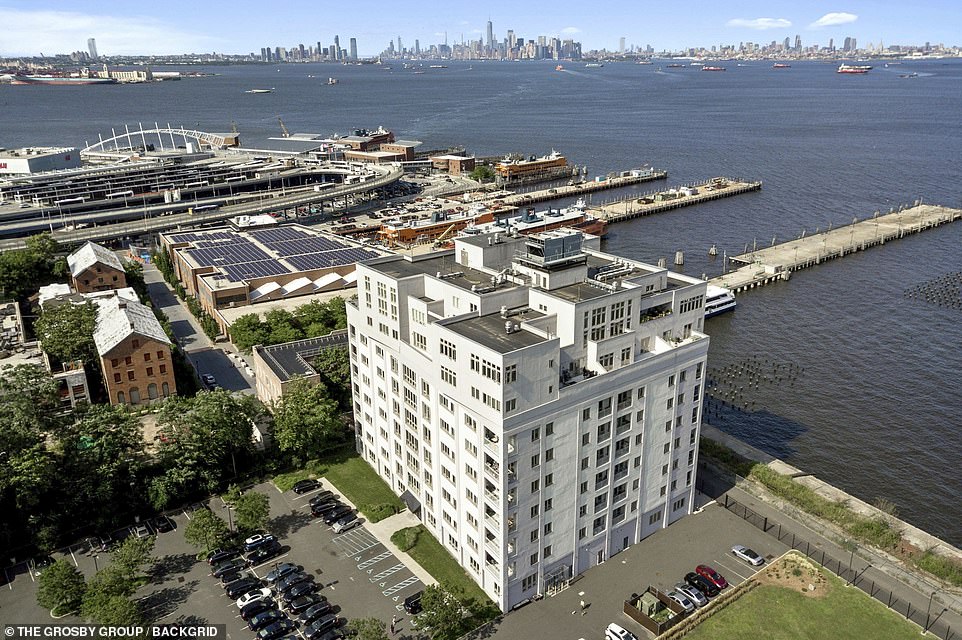 Pete Davidson’s conga line of girlfriends will no longer to contend with the watchful eyes of Pete Davidson’s mother, but instead will get to enjoy the back view if the Statue of Liberty and the famous orange ferry that shepherds people to downtown Manhattan from the ‘forgotten borough’

‘Is that all he could afford?’ questioned UrVoice on the humble abode. Davidson is estimated to be worth $6million.

‘Nice cozy apartment with a stunning view… Not at all ostentatious and very livable looking….!’ wrote Irreplacable from Vancouver, Canada. InformedCommenter responded: ‘Probably has great views of the landfills.’

The high-rise bachelor pad comes four years after moving back into what Jezebel called ‘his ancestral home,’ following a nasty-breakup to his former-fiancé, Ariana Grande. Since their 2016 split, Davidson has enjoyed a series of high profile romances to supermodel Kaia Gerber, actress Margaret Qualley, Kate Beckinsale and most recently with Bridgerton star, Phoebe Dynevor.

‘He’s like a magnet for money, success, and women. I. do. not. get. it,’ weighed in one commenter.

Users rushed to his defense when lmfaoattheworld on Twitter asked ‘Why is Pete Davidson so popular?’ and didn’t  mince words when he labelled him an ‘unfunny stereotypical Staten Island douchebag.’

The self-deprecating funnyman has also enjoyed making a mockery of his hometown in the past. In a 2017 episode of SNL, he explained: ‘The reason Staten Island hates me is because I represent what they are: a mentally ill community college dropout who got a Game of Thrones tattoo before watching the show.’ 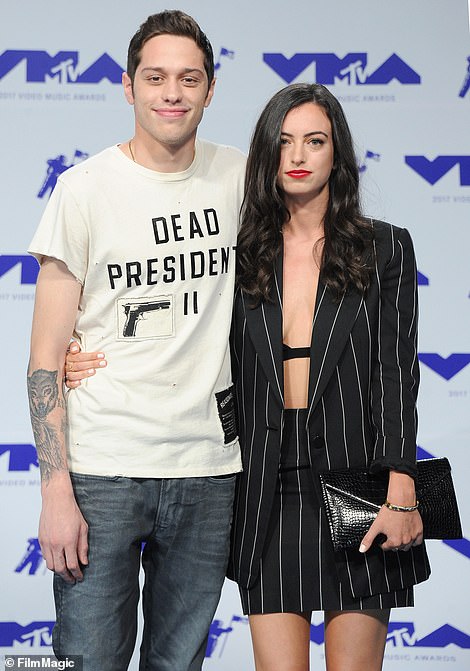 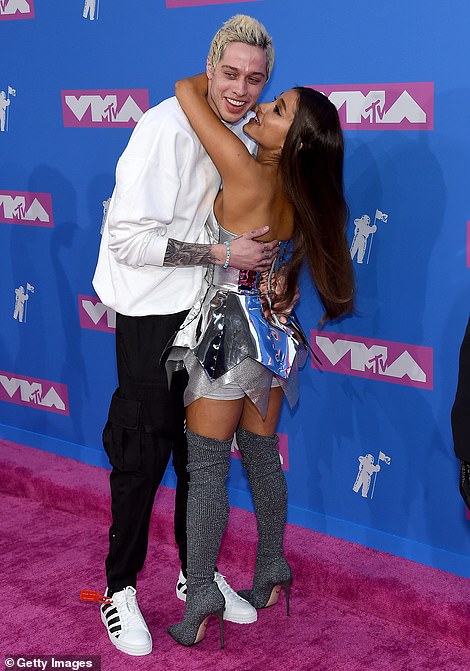 The man who has it all: Pete Davidson has enjoyed a series of high profile romances from Cazzie David, the daughter of comic Larry David (left) to his short-lived engagement with the popstar Ariana Grande (right) 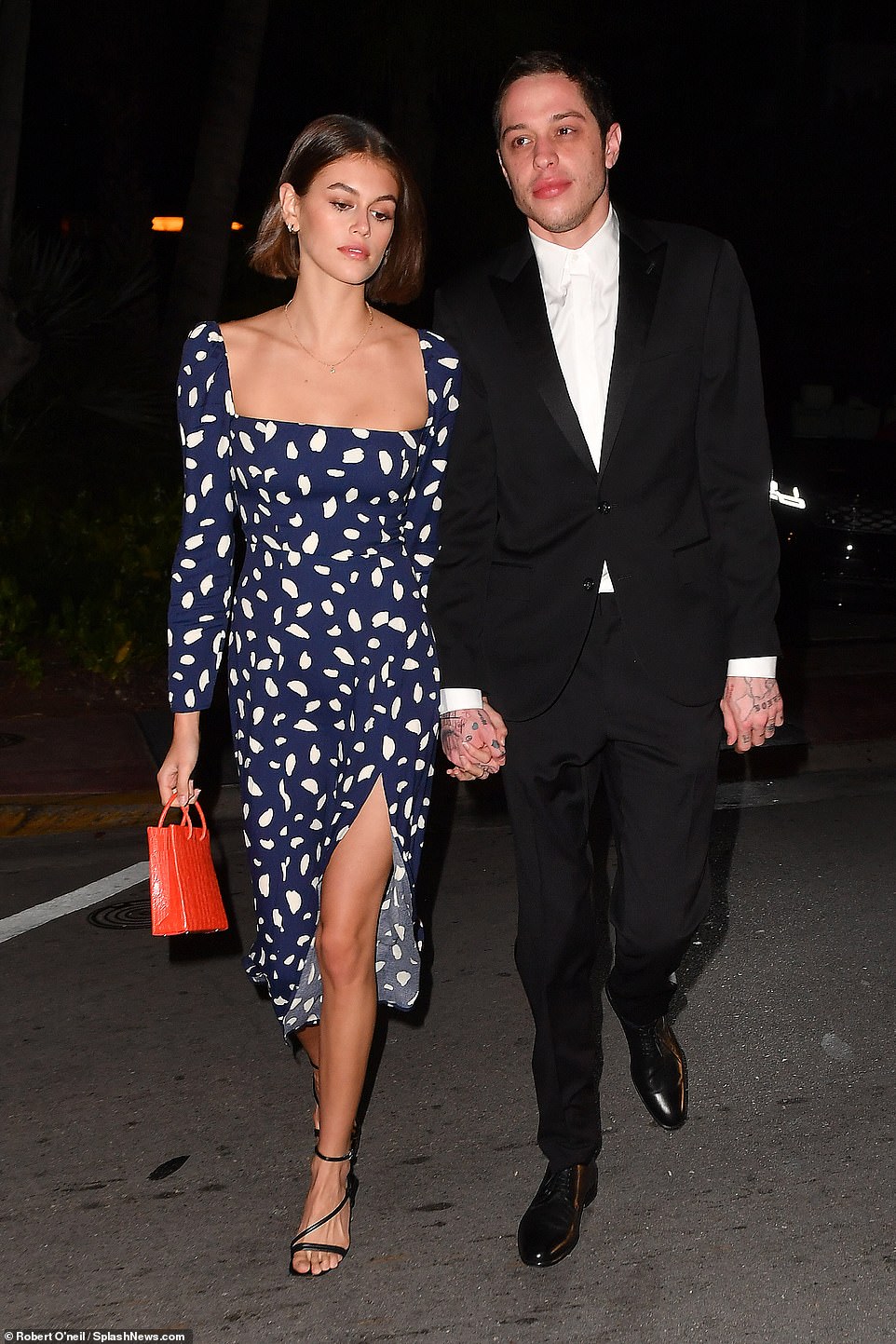 Davidson dared supermodel, Kaia Gerber for a few months at the end of 2019. When they broke up, he said: ‘She’s very young, and I’m f****** going through a lot and it was before I went to rehab. It’s just like, she should be having fun. She shouldn’t have to worry about some dude that just has issues and s***’ 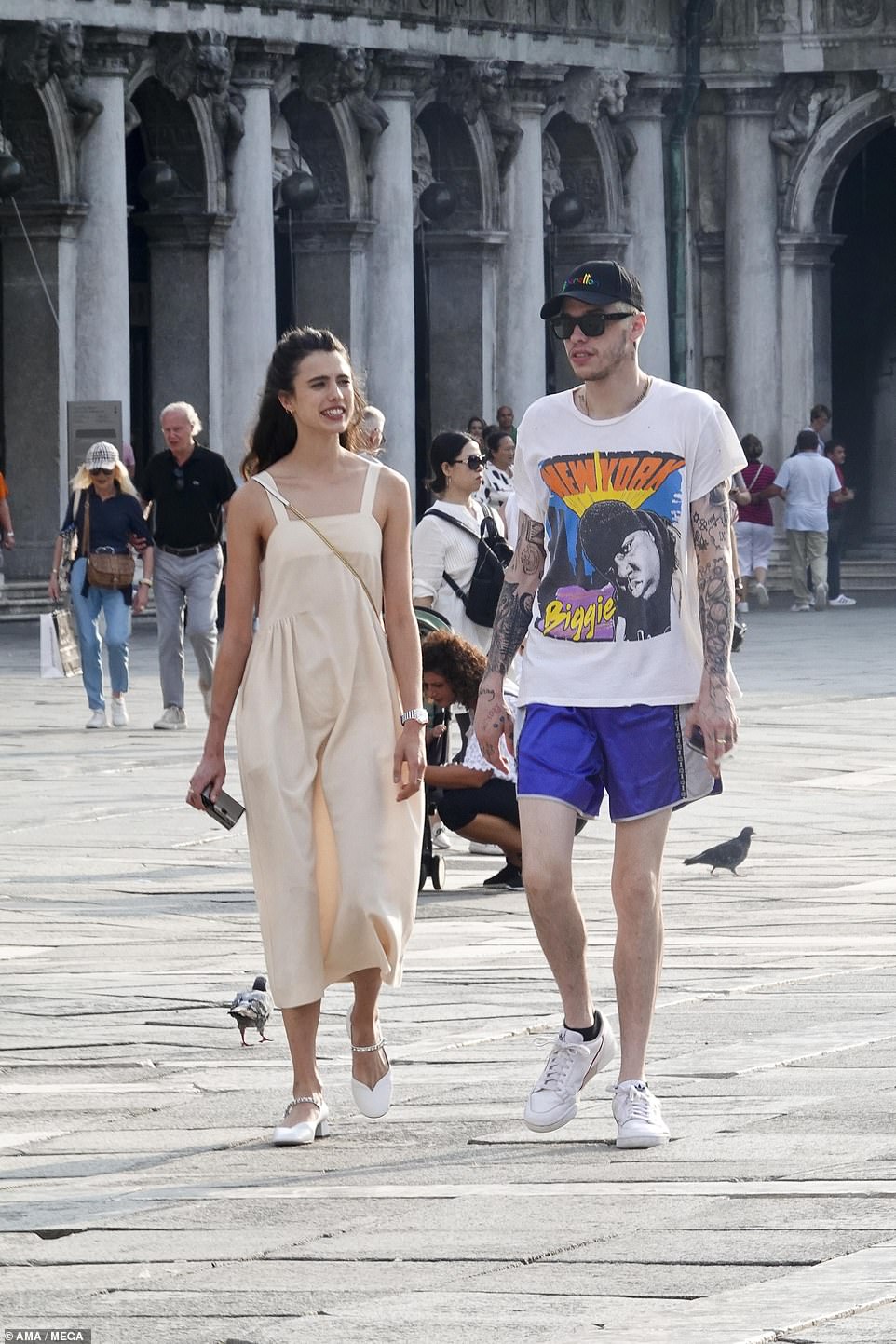 For a little over two months in 2019, Davidson and the up-and-coming actress, Margaret Qualley (daughter of Andi Macdowell) enjoyed a very public romance, gallivanting across the globe together 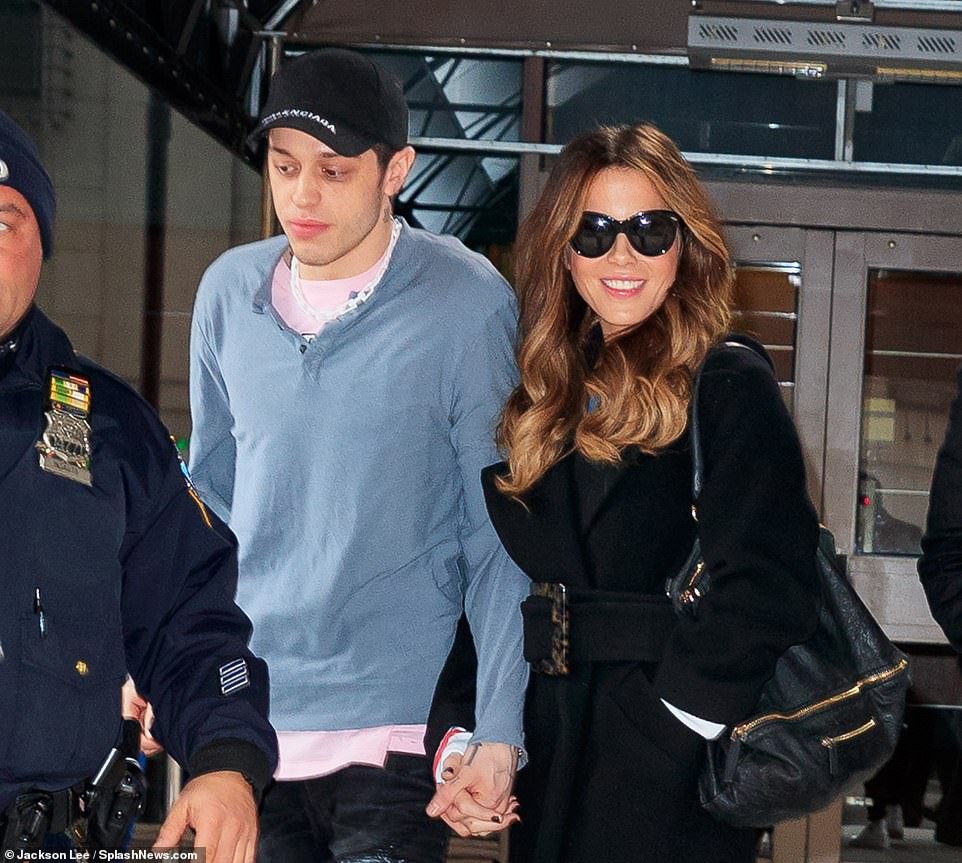 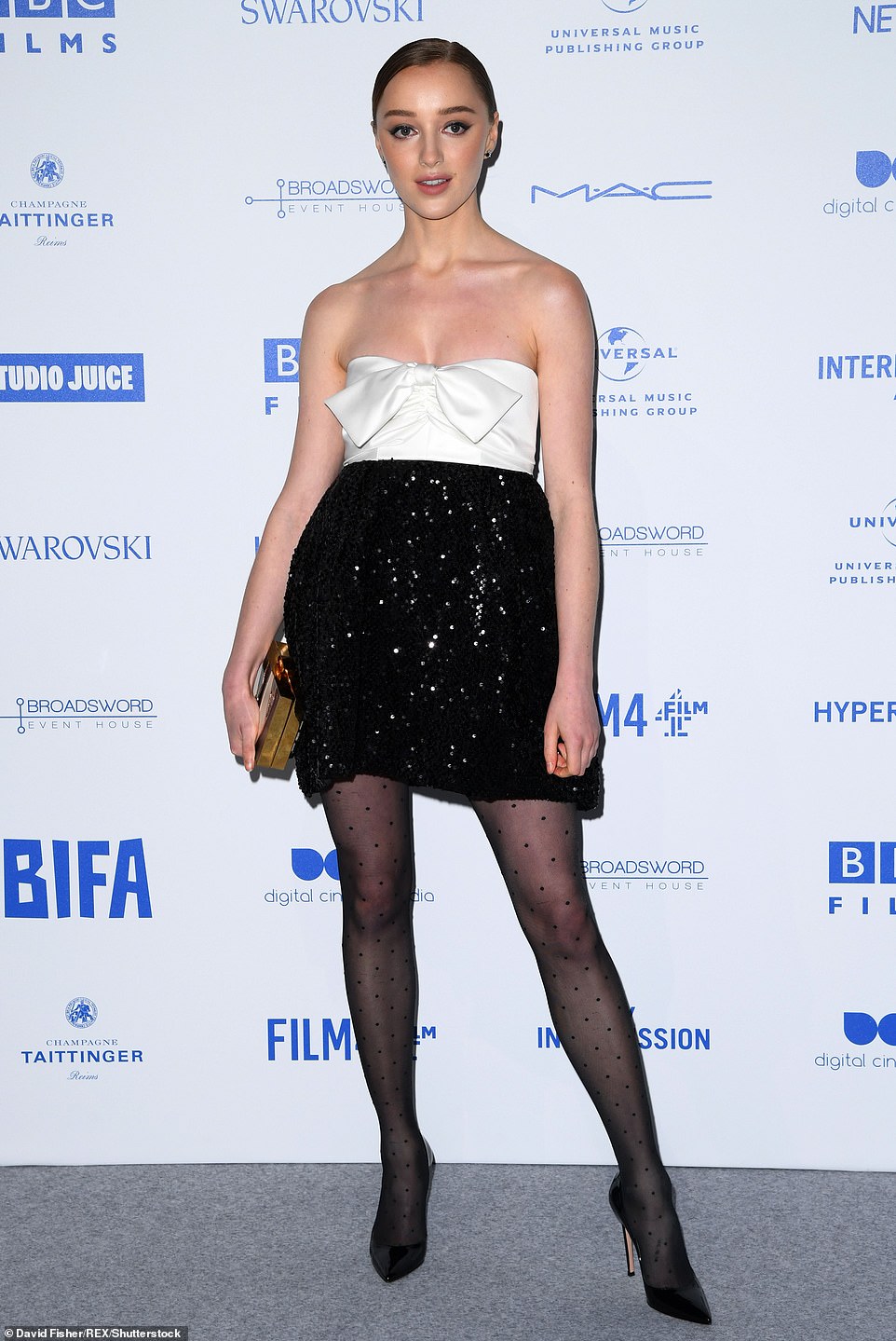 Davidson’s latest romance rumor links to Bridgerton star Phoebe Dynevor. According to The Sun, the pair are spending time together in London after meeting in New York City last month

Meanwhile one female fan takes to Twitter to lament her unrequited crush: ‘I’m from Staten Island, I deal with depression and digestive issues, I’m hilarious and sexy, smoke weed all day and Pete Davidson isn’t my perfect match????’ Another user of the social media website said that women ‘deserve better’ than a man living in his mother’s basement.

Davidson’s move out of the basement comes at an opportune time as he is reportedly in a long-distance relationship with Bridgerton actress Phoebe Dynevor, 25, after being spotted by fans in her hometown of Altrincham, Greater Manchester.

‘Today I found out that Pete Davidson is dating the actress from Bridgerton and I just have to wonder how he does it,’ moaned Lily Guiney. Venture to say she’s not a fan of The King of Staten Island.