The internet will send us back to the Dark Ages

We’re all just a few days from disaster, warns Robert Harris, the best-selling writer whose latest thriller, The Second Sleep, imagines a very real apocalypse. ‘If the electricity went for some reason, everything else would go too: sewage, transport, medicine, the internet, absolutely everything. There would be blind panic and a breakdown in law and order. The alarming thing is, it can happen very quickly: two or three days of that and the supermarket shelves would be empty, there would be people stranded all over the place.’

Harris made his name with an alternative history, Fatherland, describing a defeated Britain under Nazi control, but now he’s thinking about our future, and the catastrophe he honestly believes we may all be facing. ‘I feel there’s a strong sense now of what it might have been like just before the First World War. A long period of order, relative prosperity, then just a feeling that the whole species was gearing up for a big convulsion.’

‘We have regressed to utter idiocy and superstition and weird mob-rule and falsity, on Twitter particularly,’ says Robert Harris

The Second Sleep seems at first to be set in the distant past, in which ragged peasants barely survive by working the land, plagued by death and haunted by superstition. But a chance discovery reveals – to the reader’s horror – that this is actually a vision of our future. It is the year 1468 but the calendar has been reset after a catastrophic event, although nobody can remember what it was.

‘In those circumstances, people wouldn’t know,’ says Harris, 62, when we meet at The Langham hotel in London. His novels are always meticulously researched, so what he says can be taken seriously and is alarming. ‘If our phones stopped working and the BBC stopped broadcasting, we’d all be stumbling around in the dark. If an authoritarian regime was in power, we would be kept in ignorance as to what had happened.’

His brilliant, gripping novel actually lists six ways in which the apocalypse could come: nuclear war, climate change, a volcanic eruption, an asteroid strike, a disease resistant to antibiotics and a total breakdown in computer technology. It’s the last one he actually believes will send us back to the Dark Ages.

‘I don’t think what’s coming will be like what’s happened in the past. It won’t be a war like the Luftwaffe coming over London. It won’t even be nuclear bombs. It’s far more likely to be cyber warfare. Our lives are over-dependent on the internet and unsustainable.’

Harris is a former BBC journalist who wrote about politics before writing his first novel, Fatherland, in 1992, which was made into a film. The next one, Enigma, starred Kate Winslet. Daniel Craig was in the television series of the next book, Archangel, about modern Russia. Since then Harris has written stories set in the Vatican, the City of London, 19th-century France and a trilogy based around the ancient Roman politician Cicero. Start to read them and a theme emerges. ‘I’m interested in collapses and when things go wrong with a society, whether it’s Nazi Germany or Ancient Rome. The veneer of order cracks, then chaos begins.’

The idea of writing about the future came from looking back, he says. ‘I like reading scholarly works that try to piece together what ancient civilisations were like. That made me think: I wonder what people will make of our society a thousand years from now? What might happen to us and what would be left of us? So I wrote The Second Sleep. Every society thinks it’s going to last for ever. None has ever done so, that I’m aware of.’

Harris has sold millions of copies of his books and is said to be worth more than £20 million, so would his wealth protect him from an apocalypse? ‘No, I would be hopeless. I live in the country and on the river and we do grow vegetables and we do have a wood-burning stove, so to that extent I’d be better off, but in practical terms I’m virtually hopeless. That’s why I’m a writer.’ 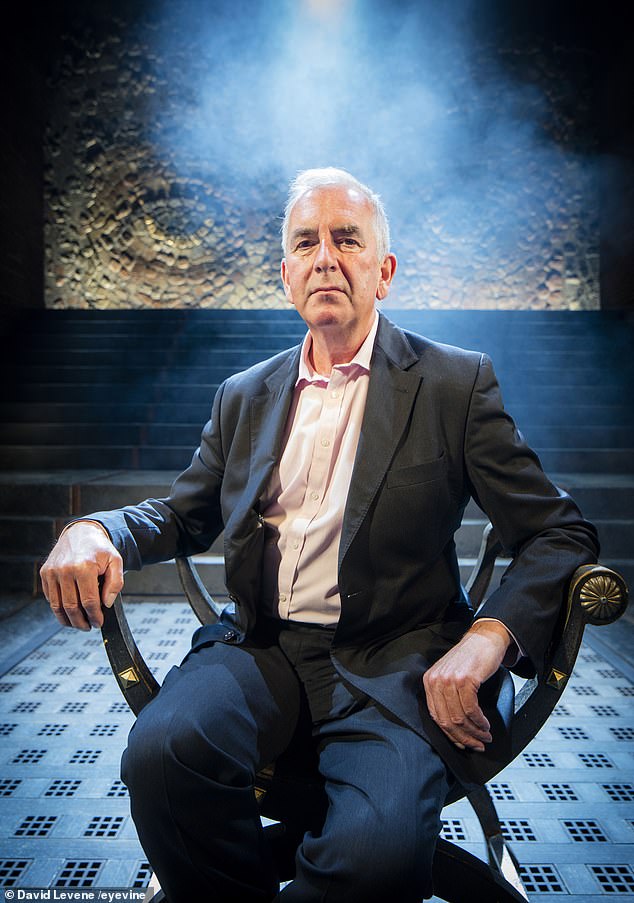 Author Robert Harris, a former BBC journalist, is now worth about £20 million

He lives in a former vicarage near Newbury with the writer Gill Hornby, sister of Nick. They have four grown-up children – Holly, 28, Charlie, 27, Matilda, 22, and Sam, 18 – who he worries about. ‘The lives of young people these days are quite tough in terms of social media anxiety, the difficulty of getting a settled job and all of that. But I can’t deny that I’ve structured for myself a life that is sequestered.’

They could all take refuge on his land if the worst does happen, he says, but won’t a desperate mob with weapons come for what they have? ‘Yes. Quite possibly, and our golden retriever is not going to stop them! No, I think it would be a vision of hell, in truth. The sort of people who survive would be tough. Under the surface of society, chaos lurks.’

Harris still has a strong sense of his roots, having grown up on a council estate in Nottingham. ‘I grew up in a very ordinary, working-class background. My father was a blue-collar worker. The first 18 years of my life were that way, before Cambridge, so I’ve always got those memories of what it was like to not have privilege.’

The way he describes society being rebuilt in The Second Sleep can be read as a kind of hymn to the lost skills of working men like his father. ‘My father was a printer and mechanically minded. He could fix machinery, take apart a car engine and put it back together again. Most of my friends’ dads were the same. My mother was always repairing or making clothes. The whole business of repairing things seems to have gone. You just throw it away and get a new one. We have become detached from the things that make our lives work.’

The plot of The Second Sleep turns on its head when a young priest discovers ‘a device used by the ancients to communicate’ bearing a logo that speaks to him of humanity’s fall from grace in the Garden of Eden: an apple with a bite taken out. We recognise it at once.

‘The iPhone is an astonishing triumph of the age of science and reason, but what are we using it for? We have regressed to utter idiocy and superstition and weird mob-rule and falsity, on Twitter particularly. This sophisticated thing seems to be making us more and more infantile. That’s an astonishing paradox – and a really rather frightening one.’

He’s still on Twitter though. ‘It’s bad for the soul but I am still, in my heart, a journalist. I’m just too much of a junkie for the old polemic, which is how I used to make my living as a columnist. Also, you get the news instantly.’

He smiles. ‘And the President of the United States speaks to me directly. This is an extraordinary thing. Nothing goes to the State Department or the Pentagon, it’s just some fat guy in his bedroom who rolls over in the night and talks to the world. Who would ever have thought that could happen?’

Powerful people fascinate him. He was very close friends with Tony Blair until they fell out over the invasion of Iraq. When Blair stepped down in 2007, Harris wrote a novel about a writer hired to produce the autobiography of a leader subsequently accused of war crimes. The movie version of The Ghost starred Pierce Brosnan as the leader. It’s said Blair stopped speaking to Harris after that, but has anything changed lately? ‘No, I haven’t spoken to him for a good 15 years.’

There’s a theory that politics is partly in such a mess these days because Blair built hopes so high then let his believers down so badly. ‘I think that’s true. The reason Tony Blair is a tragic figure is not the Iraq War, actually. It was his pulling out of Parliament and going off to have a new, business-orientated career. That is not something a statesman would have done in the past. If Blair had stayed and led his faction within the Labour Party – and it still had some credibility and integrity as a result – the history of our time would have been different. But he left that faction leaderless, brotherless and discredited.’

Harris was once one of the biggest donors to the Labour Party, but declared on Twitter he was leaving after Jeremy Corbyn appointed Seumas Milne as his director of communications in October 2015: ‘Council-house born. Comprehensive-school educated. Voted Foot, Kinnock. But not for private-school apologists for the IRA and Stalin. Sorry.’

And Harris is scathing about the current generation of leaders, on all sides. ‘Most people’s feeling is: “I don’t want any of these. Who are these people?” ’

Previous generations of politicians were better people, whether you agreed with them or not, he says. ‘Harold Macmillan went to Eton but he fought alongside miners in the First World War, so he had a connection with ordinary people forged in warfare. The Labour leadership race of 1976 was fought between Denis Healey, Tony Benn, Roy Jenkins, Anthony Crosland, Michael Foot and Jim Callaghan. They were really very talented politicians, when you contrast them with anyone who might contest the leadership of any party now. That’s not just nostalgia, it is objectively true. The talent is no longer in politics.’

What’s it like to be so rich at a time when people are really suffering? ‘I don’t have guilt about enjoying life, to be honest with you. I feel it’s about time in my family, after about 2,000 years of s***, that someone got out of that!

‘Rather guiltily, after my second novel, I bought an open-top Jaguar. I took my father for a spin. He said, “This is marvellous. You’ve earned it!” It was his way of saying, “Get on with it, enjoy yourself.” So I don’t have a problem with that. I pay half my income in tax.’

I voted for Kinnock and Foot. But I won’t vote for these privateschool apologists for the IRA and Stalin

I’ve heard Harris described as a champagne socialist. Is that fair? ‘I’m a liberal, not a socialist. I believe people should be free to live their own lives without censorship from anyone, so long as they don’t do harm to other people.’

Given what he says about the future, is he afraid? ‘I am by nature, oddly enough, an optimist. It’s because I can take my anxieties and worries and turn them into a story and characters and I can tame them in that way. The act of creation is a kind of therapy in itself.’

Decency will endure, The Second Sleep suggests. Society will rebuild. Getting there will be frightening, though. Does he really believe our end is just around the corner? ‘I don’t know,’ he says. ‘Sometimes it feels bloody close.’

‘The Second Sleep’ by Robert Harris is published by Hutchinson, priced £20