The Isle of Wight is awarded Unesco Biosphere Reserve status

Rare wildlife and plants found nowhere else in Britain: The Isle of Wight is awarded Unesco Biosphere Reserve status

The Isle of Wight has been awarded Biosphere Reserve status by Unesco.

It was handed the accolade by the United Nations body in recognition of its ‘strong tradition of environmental action’.

The island is now one of just seven areas in the UK to be given the prestigious honour.

The Isle of Wight, pictured, has been awarded Biosphere Reserve status by Unesco

In gaining Biosphere Reserve status, Visit Isle of Wight says the island has been recognised as offering ‘one of the best areas in the world for managed landscapes where human impact is not detracting from the landscape and wildlife, thanks to the work of various organisations and land-owners’.

It adds that it greatly enhances its reputation as a special place to live and visit.

The Biosphere Reserve status covers the whole of the Isle of Wight and the Solent.

It encompasses and recognises everything from locally produced food, to the white chalk stacks of The Needles; and from activities such as walking, cycling, water sports and fossil hunting, through to year-round events.

The tourist board says the island has always had a reputation for being a destination for spotting rare wildlife species, such as red squirrels in the woodlands, Glanville Fritillaries (butterflies) on cliff walks, and the Ventnor Wall Lizard, often seen sunning themselves on rocks – in addition to plants that occur nowhere else in Britain.

In 1963, half the island was designated an Area of Outstanding Natural Beauty. 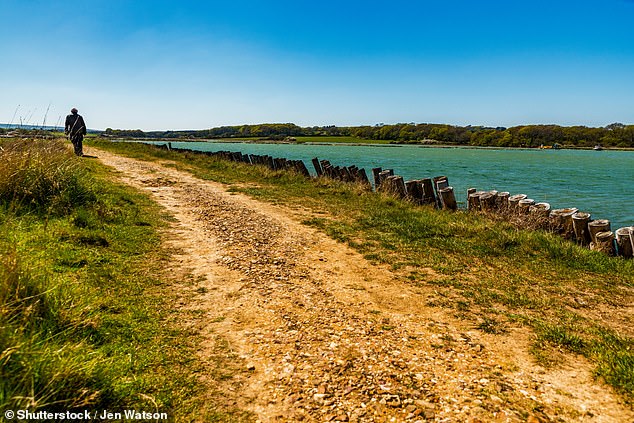 The Biosphere Reserve status covers the whole of the Isle of Wight and the Solent. Pictured is a dirt footpath alongside a tidal creek on the island

The island also boasts the Isle of Wight Coastal Footpath, which stretches for over 64 miles – with over 500 miles of designated footpaths and plenty of designated trails criss-crossing the Island as a whole.

The tourist board believes that the Unesco accolade will help build on its sustainable tourism initiatives, including the recently launched Slow Travel Guide to the Isle of Wight, and will also highlight it as a destination for those in search of outdoors and well-being breaks.

In a report on 2019’s biodiversity status applications, Unesco noted that the Isle of Wight ‘has a strong tradition of environmental action’ with ‘projects and initiatives promoting environmental education and awareness’ that also ‘help people achieve healthier lifestyles and diets, develop eco-tourism activities’ and that ‘test new measures for climate change mitigation and adaptation’.

The Minister and ambassador of the United Kingdom of Great Britain and Northern Ireland to Unesco, Matthew Lodge, said: ‘The Isle of Wight community works hand-in-hand to conserve and enhance the island’s rich range of cultural heritage and natural biodiversity by bringing together many partners in their pursuit of a more culturally and ecologically sustainable future.

‘By joining this network, the Isle of Wight will be able to learn from and co-operate with communities all over the world who are pursuing innovative initiatives of looking after our precious environment for future generations.

‘I am particularly pleased that this decision has been made during the Year of Green Action, a year-long project initiated by the UK Government to get more people from all backgrounds to connect with nature, and to show how we can all take affirmative action to improve our environment.’