Rosanna Laurence hadn’t driven since she passed her driving test three years ago and had forgotten what the pedals do.

Perhaps not an ideal situation considering the 25-year-old was in a team taking part in the Mongol Rally, from the Czech Republic through 21 countries to remotest Siberia, 15,000 miles away.

It would be a journey that would take Rosanna and two others along the Afghanistan border, into a war zone, to a car park where they cooked pasta beside a Mongolian man crying in his car – and they would have lunch with two Iranians armed with an AK-47.

On the border: Anna, Miles and Rosanna on the Pramir highway in Tajikistan along the border with Afghanistan

The £700, 1.2 litre, 13-year-old Volkswagen they used – which they bought between them for the trip and named Dora – would provide extra drama by suffering mechanical woes such as a broken clutch in Iran and a severed fuel tank.

The team – Rosanna and friends Miles Pattinson-Appleton, 24, from Herefordshire, and David Eriksen, 26, who is half Danish, half English but grew up in the south of Spain – began their epic odyssey in London on Friday, July 13.

They all took turns to drive and Rosanna, a primary school teaching assistant from London, grappled with the controls slightly but all was well in the end. 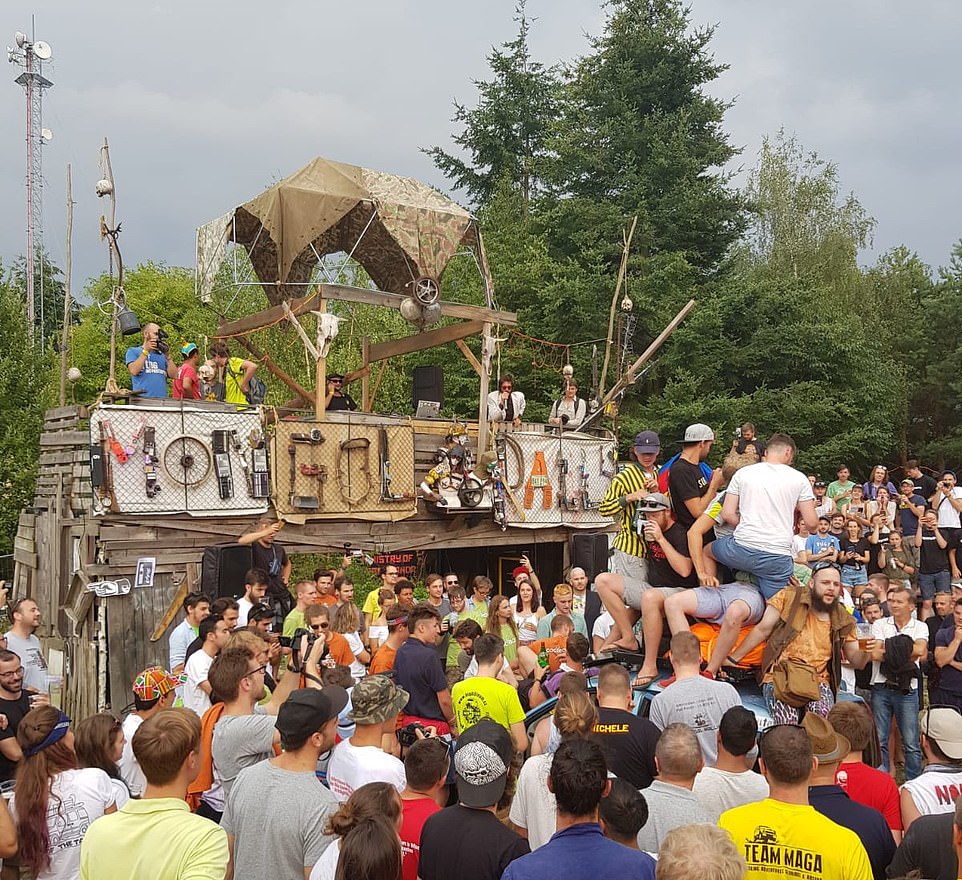 Start party: The team met other Mongol Ralliers in the woods outside Prague in the Czech Republic for a party to celebrate the start of an odyssey that would take them half way across the world

The rally’s starting point was a former Soviet base in the middle of some woods outside Prague – and the participants were a lively bunch.

Rosanna told MailOnline: ‘When we got there it was like something out of Mad Max where everyone is dressed up in crazy outfits and arm wrestling.

‘It was the weirdest most testosterone-fuelled place you could ever imagine. It was ridiculous. I just thought “where am I?”’

On the last country’s border with Azerbaijan the team had set up camp in a pitch-black field and begun cooking risotto when a mystery car pulled up.

Rosanna said: ‘A guy got out and beckoned us over. We were trying to speak to him but he was speaking in Russian.

‘What he was trying to say was that where we were camped was too dangerous. It turns out that Armenia and Azerbaijan had been at war for the past 10 years and we had no idea.’

The group learnt that three civilians had been shot in the town they could see from their camping spot.

Rosanna said: ‘It was a war zone and this guy was trying to explain to us that we were camping in the crossfire.

‘As we were driving off we could see there was a light on in one of the abandoned houses nearby so who knows who was sat in there watching us.’ 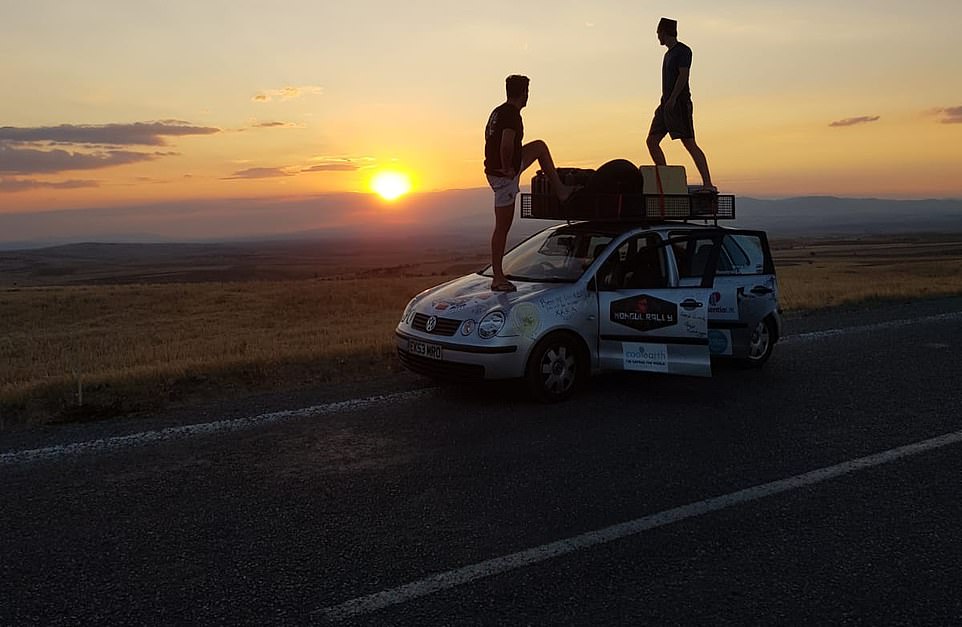 Views: Driving for hours every day was never boring because of the sights the team got to see along the way. This picture was taken in Turkey 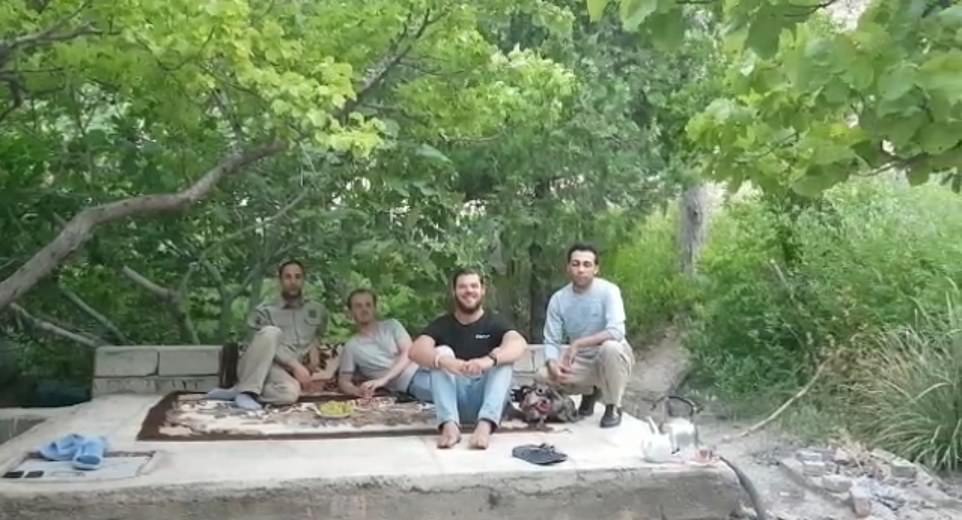 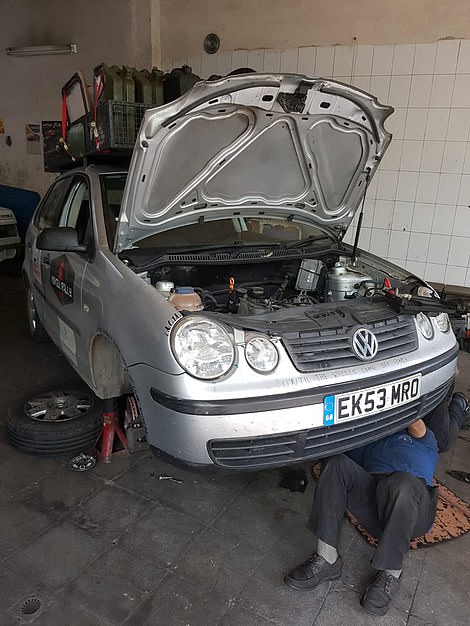 Dora had to be fixed on two occasions along the way. This image was taken in Tabriz, Iran, after the clutch broke

After the horror of realising their near fatal mistake the group headed cautiously towards Iran but, as they crossed the border, the clutch in Dora broke.

What followed was a heady mixture of utter frustration, frayed nerves and pleasant surprises.

The Iranians require British and American passport holders to travel with guides, so Rosanna and her team had arranged through the rally Facebook page before the start to team up with other cars at the border and chip in towards the cost of their escorts.

In the end they hooked up with nine other cars, with five guides between them.

What hadn’t been made clear was that one of the guides, behind the scenes so to speak, had arranged for a tow truck to take Dora to a garage.

The team waited, and waited… but no help materialised.

After two hours, to the team’s relief, two passing Iranian rangers stopped and ordered a tow truck to take the car to a mechanic. 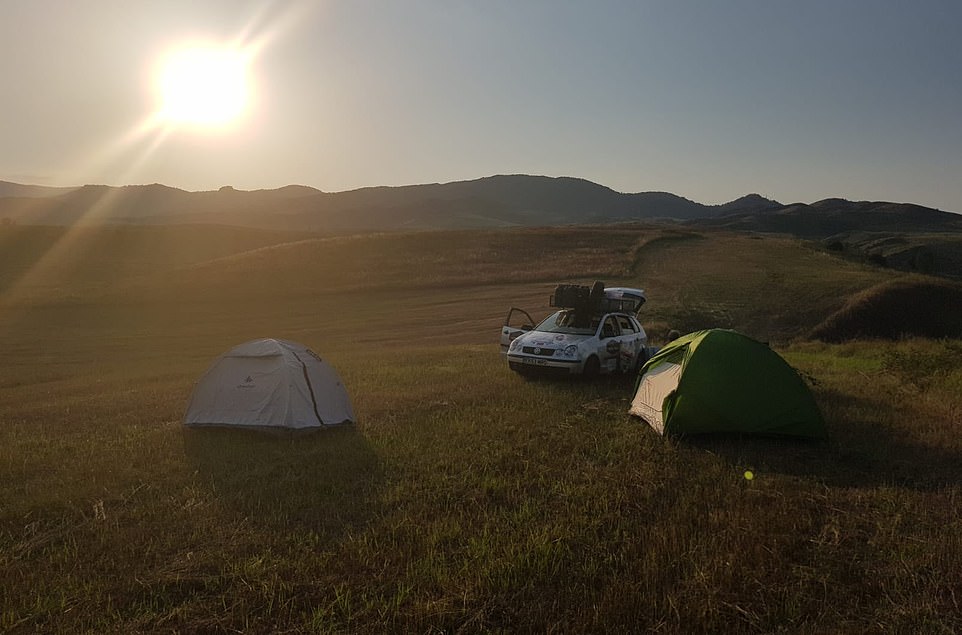 Set up camp: The team slept in fields and back gardens. They drove for days without reaching a town or city. This picture was taken in Armenia 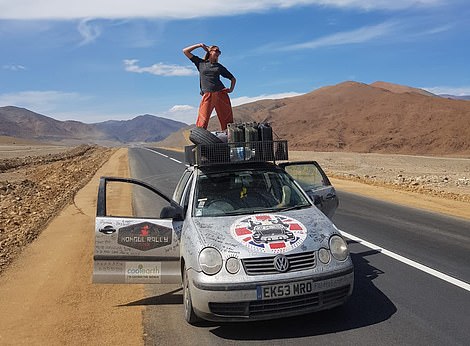 The car had no air con, which meant oven conditions often prevailed inside. This image was taken in Mongolia

But their kindness didn’t end there.

Rosanna explained: ‘They asked if while we waited we wanted to go for tea with them. I was thinking in the back of my head is this a good idea?

‘We were getting in the back of a truck with these two guys. I looked into the back seat and they had a loaded AK-47 on it.

‘They took us to their hut in the mountains and gave us tea and figs.

In the end they were blessed with both the tow truck ordered by the rangers and the one by the guide – ‘which was a bit awkward’, said Rosanna.

But the Iranians didn’t care and both trucks were put to use, one towing the car, the other carrying the team.

Further acts of kindness materialised throughout their journey in Iran. 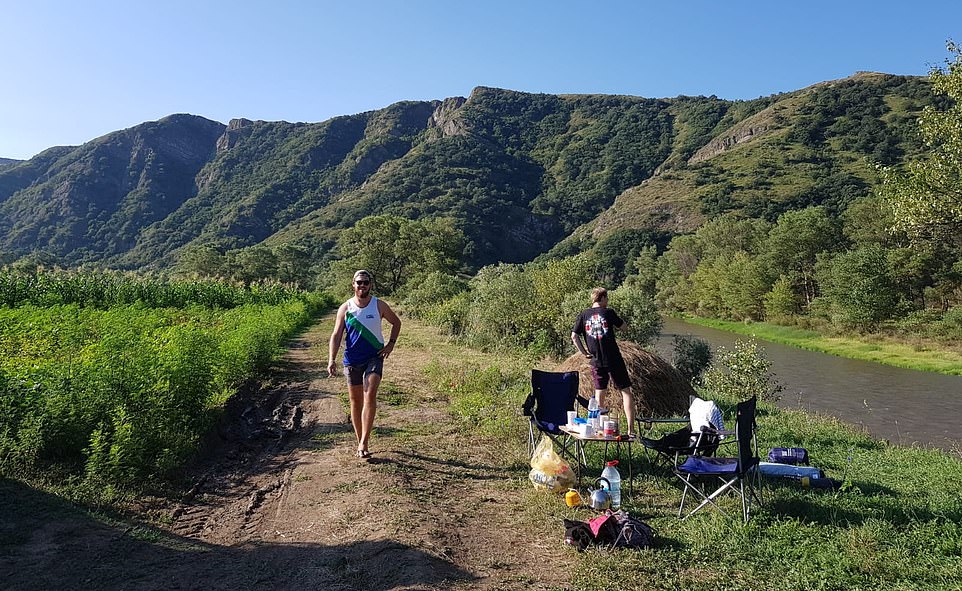 Miles, David and Rosanna camping on the side of a road where they cooked breakfast at 8am before driving for 10 hours with no food

Iranians passed bread through the car window, invited the team to their houses for tea and refused to allow them to pay in restaurants.

Rosanna said: ‘I have never visited any country where the people are just so nice. Everyone we met was so friendly. They were knocking on our windows asking where we were from and why we were in Iran and what we thought of their country.

‘I do not think Iranians were used to having people come visit their country.’

Another shock was the dress code.

In extreme heat Rosanna was forced to cover herself in a headscarf and wear trousers in the devoutly Muslim country, where ‘fashion police’ enforce the law. 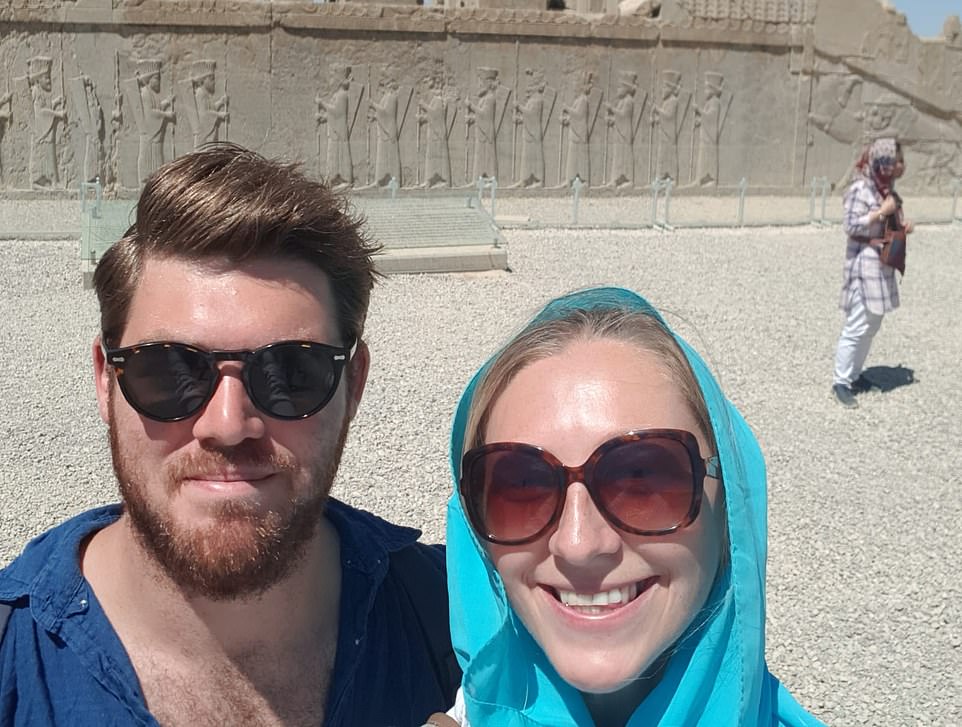 Headscarf: David, Rosanna and Miles were forced to cover bare skin in Iran. Even men aren’t allowed to show their legs

Rosanna said: ‘I was wearing long-sleeve tops. You could not have your ankles showing, your feet showing, you had a head scarf on and it was just boiling.

‘It was really interesting. I spoke to some of the younger Iranian guys who do not agree with the headscarf and do not think women should be wearing it.

‘It was interesting when we were in Tehran, the capital city. The women there are so beautiful, just stunning, but they would wear their headscarf further back on their heads so you could see a lot of their hair.

‘But the further south you go you could tell it became more religious and it became stricter.

‘I was told off once for wearing flip-flops and had to go back to the hotel and put trainers on. They have genuine fashion police going around making sure women are wearing the right things.’

The heat, meanwhile, was an ever-present torture.

Rosanna said: ‘It was unbelievably hot, up to 40C. We did not have air con in the car so we would have the windows open to let in a breeze and it was honestly like having your head in a hot oven.’

In Uzbekistan David Erikson left for home as he had some personal issues to tackle. 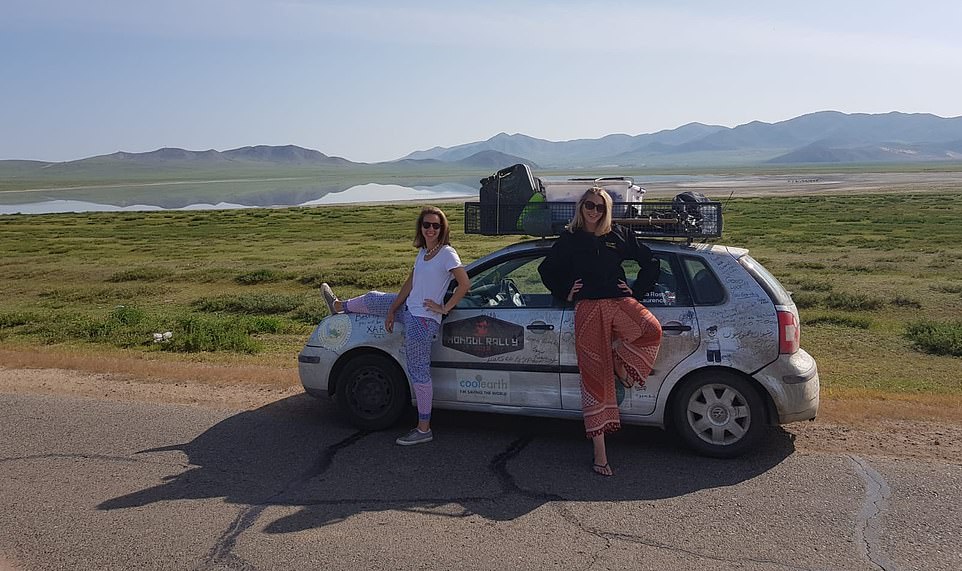 New teammate: Anna Ross (left) joined the team in Uzbekistan. David left the trip part-way through because of a personal issue at home 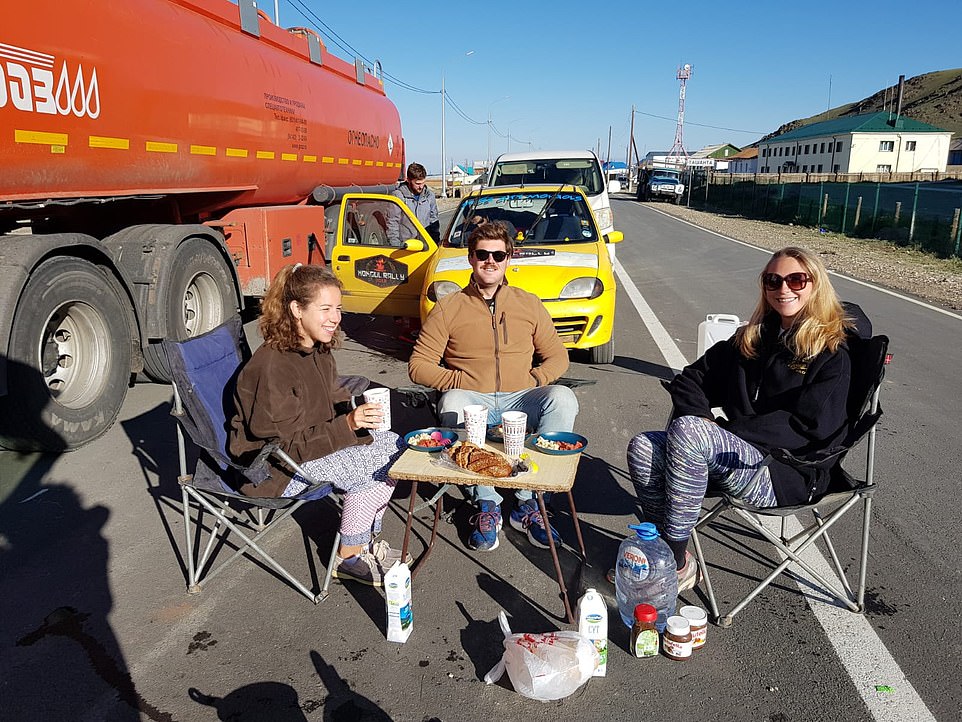 This stretch of road was transformed into a restaurant area for the hardy travellers. This image was taken on the Russian side of the Russia/Mongolia border

But they remained three-strong because another friend, Anna Ross, who was expecting to bring the numbers to four, was picked up at the airport.

The next challenge would be the Pramir highway in Tajikistan, which runs along the border with Afghanistan.

The two countries are separated by just a river at this point and it’s a dangerous area. 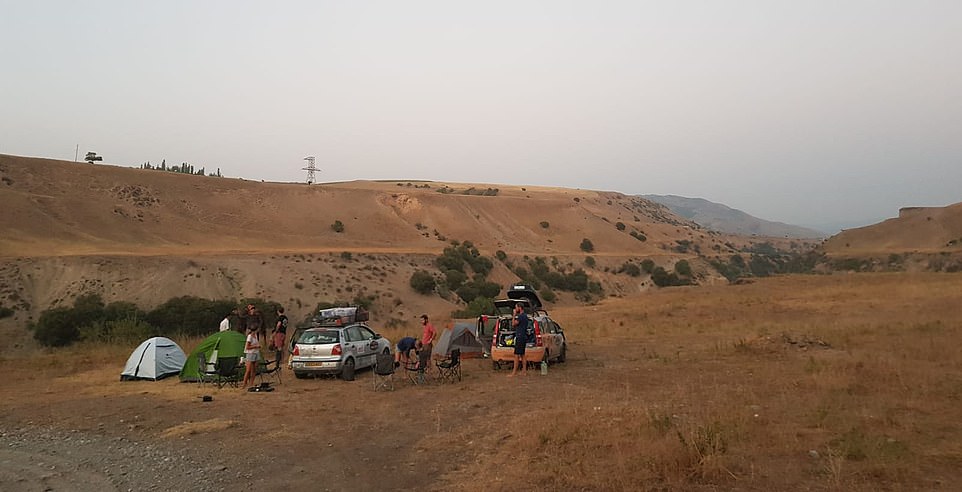 The team joined up with another Mongol group for the trip along the Pramir highway, which runs along the border between Tajikistan and Afghanistan 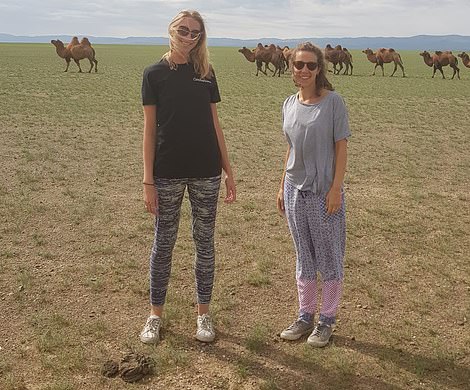 Alien: Apparently Rosanna’s height resulted in a few chuckles from Iranians. This image was taken in Mongolia

Just days before they arrived there some European cyclists had been murdered by terrorists who’d crossed into the country from Afghanistan.

There were bandits, too. They heard about a couple on a motorbike who were attacked by robbers who tried to pull them to the ground using ropes.

So when the team met another Mongol Rally team in a bar one evening, they decided to stick together.

After driving through Kazakhstan, where ‘nothing happened’, the team hit Mongolia, where something definitely did happen – the car’s metal sump guard fell off and ripped a hole in the fuel tank (a sump guard is a panel that protects the underside of the car).

Rosanna said it was a ‘dark, dark day’ when that happened.

The team pulled over with petrol pouring into the sand and they waved at passing cars in a bid to get help.

Eventually a truck and a Mongolian couple in a car pulled over to see if there was anything they could do.

Rosanna said: ‘The truck pulled the car with Miles driving it and Anna and I jumped into the car with the couple who drove us to the nearest town.

‘We had to pay them obviously but they were really great. However, it took so long because the tow rope kept snapping. It was a dark day.’ 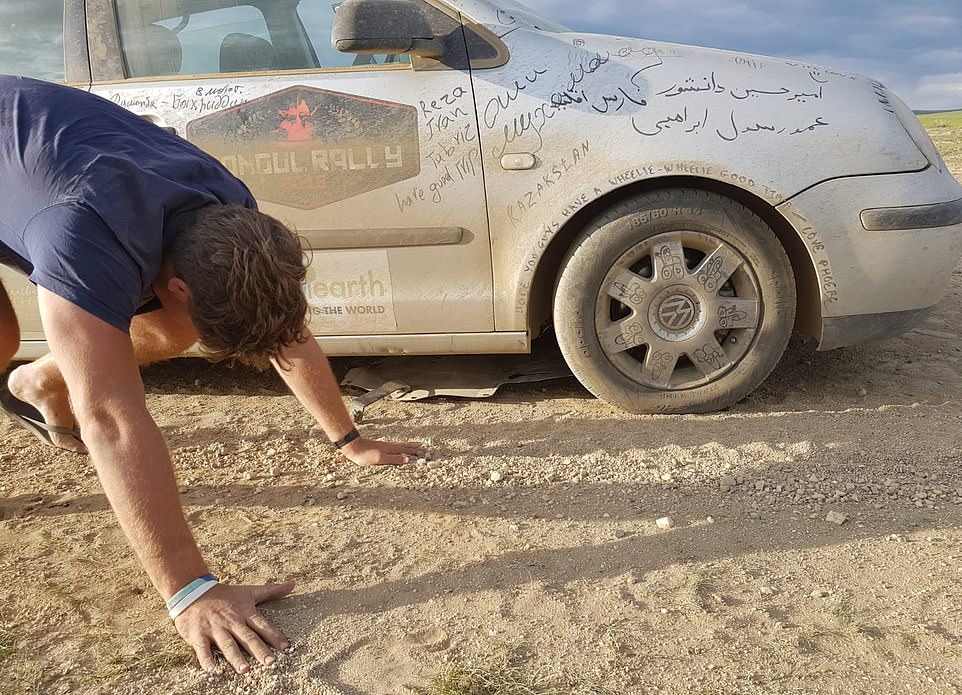 Broken: Miles inspects the underside of Dora in Mongolia after the sump guard broke 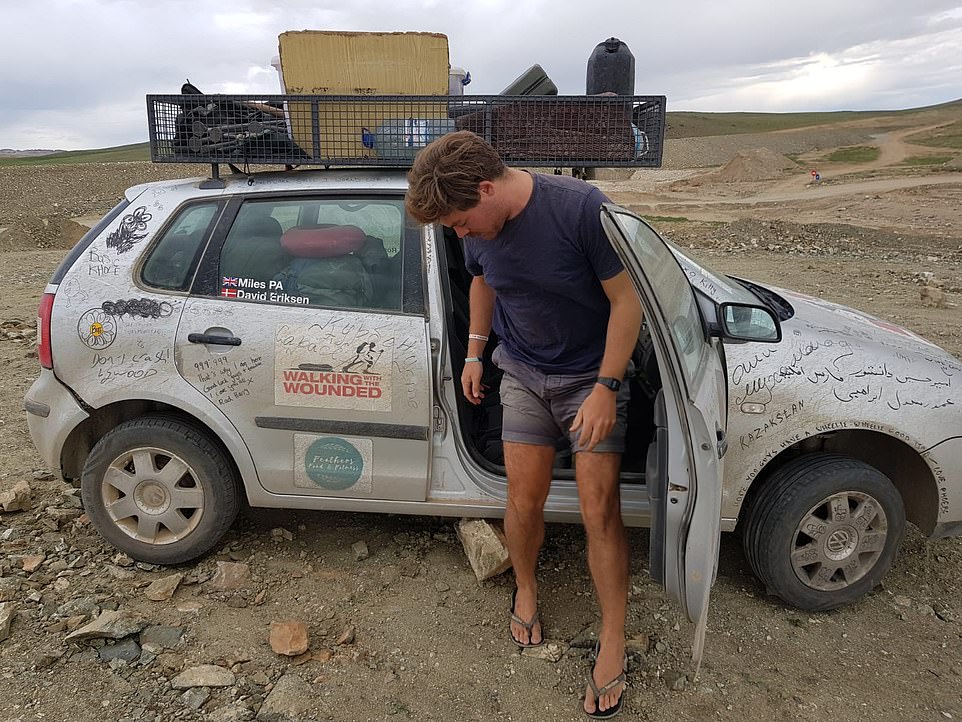 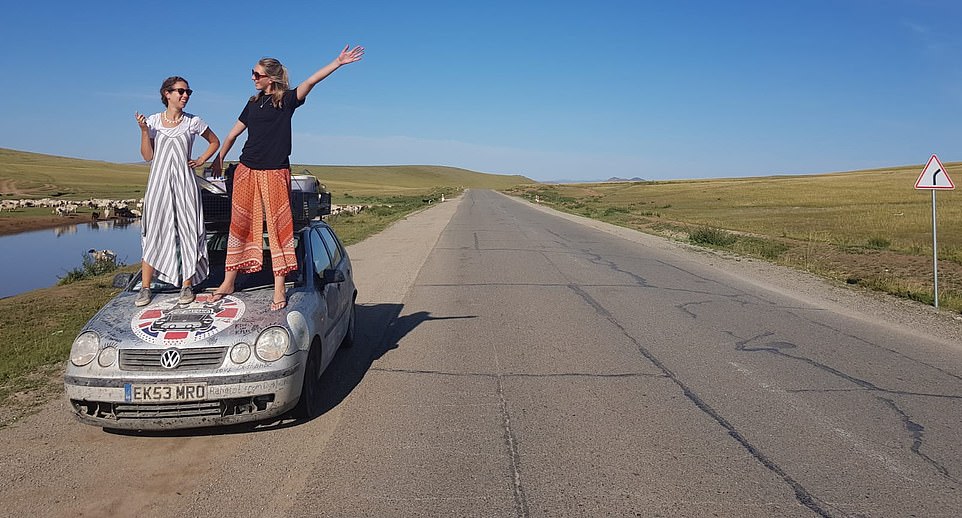 Anna and Rosanna stand on Dora’s bonnet in one of many epic landscapes that they passed through. This image was taken in Mongolia

When they got to the next town it was 11pm, on a Sunday, and the group had not eaten since 7.30am.

Rosanna said: ‘It was awful. We were in a car park outside a hotel cooking pasta on a gas stove and there was a weird guy in the car next to us who was crying for some reason.

‘It was so weird. We finished cooking the pasta and added what we thought was tomato sauce – but it was actually tomato puree.

‘It was disgusting. I just thought “I want to go home”.’ 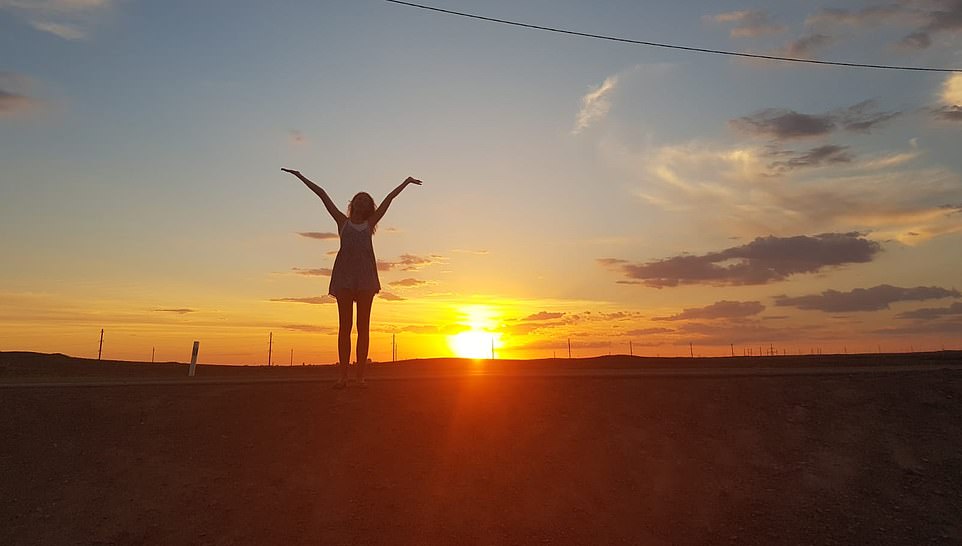 Way to glow: Picturesque views followed the team through each country as they drove for up to 12 hours every day. This picture was taken in Kazakhstan

The team persevered though and reached the finish line in the remote city of Ulan-Ude on Monday, September 3, seven weeks after they’d set off from London.

Rosanna added: ‘We managed to just stumble across the finish line. As we approached our car just started cutting out.

‘The engine just died. Every time we stopped at a traffic light the car would just cut out.

‘It was ridiculous. It was like the car knew it was the end.’

Amazingly, some of those in the rally drove all the way back. Rosanna’s team? They took a plane – and the organisers sold Dora for scrap.

The team raised £3,300 from the adventure, which was divided equally between the charities Cool Earth, Dementia UK and Walking with the Wounded. 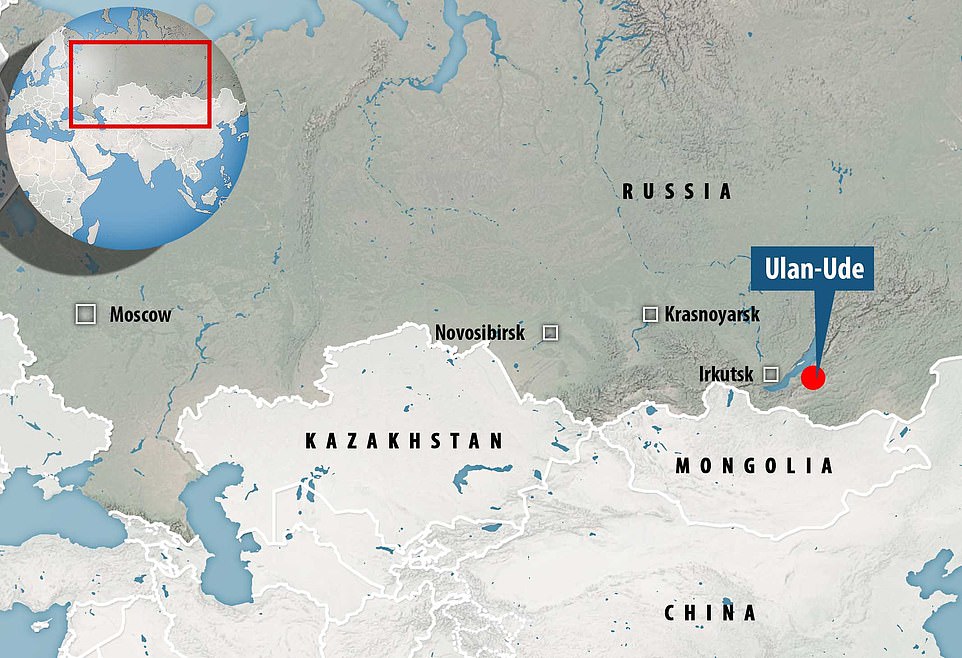 The team reached the finish line in the remote city of Ulan-Ude on Monday, September 3, seven weeks after they’d set off from London