These astonishing pictures underscore the bewitching wonder of the Earth’s oceans – and their fragility.

They’re winning and commended pictures in the Ocean Photographer of the Year 2022 awards, a prestigious annual contest that sets out to ‘shine a light on the beauty of the ocean and the threats it faces’.

This year the contest received thousands of submissions from around the world, with a photograph of a surfer battling a Teahupo’o wave, one of the heaviest waves in the world, wowing the judges the most and earning French Polynesia-based photographer Ben Thouard the title of Ocean Photographer of the Year 2022.

A sweet picture of a sea lion checking out its reflection in a camera lens, a heartwarming shot of a family of cuddling polar bears, and a harrowing image of a ‘beached and bloody’ whale in Mexico are among the other pictures that caught the judges’ attention.

An exhibition at London’s Tower Bridge, which runs until November 7, showcases the mesmerising pictures that have snapped up accolades.

Below is a selection of the wonderful photographs that have made the cut in the awards. Scroll down to the very bottom to see Thouard’s award-winning wave shot…

This sweet picture – highly commended in the Conservation category – of an adorable harp seal pup was captured by Ellen Cuylaerts. She snared the picture at sunset on Les Iles-de-la-Madeleine, an archipelago in Quebec, Canada 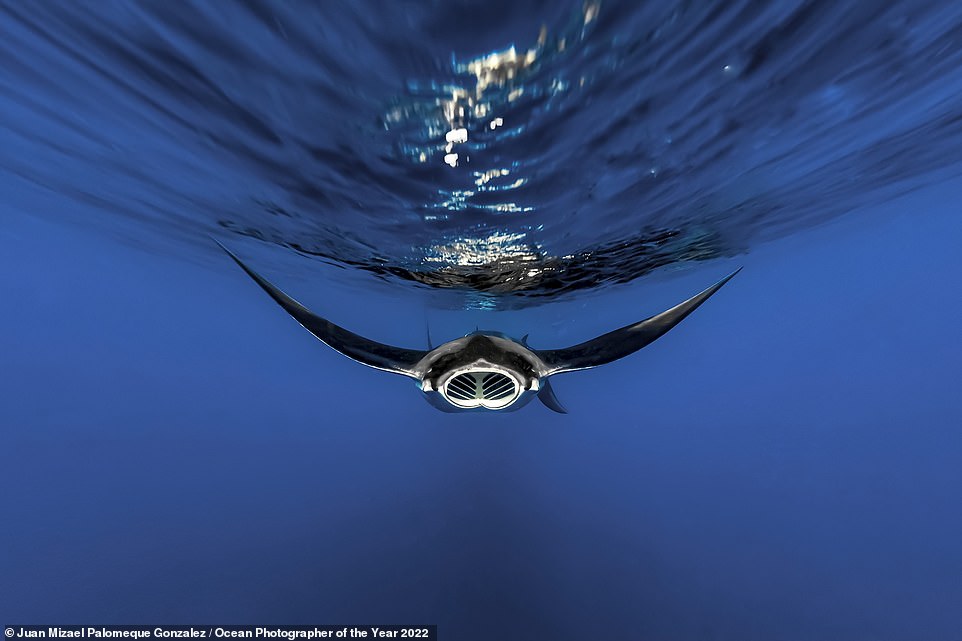 Landing the bronze medal in the Wildlife category, this picture of a manta ray off the coast of Mexico is the work of Juan Mizael Palomeque Gonzalez. The photographer draws attention to the ‘beautiful symmetry’ of the creature 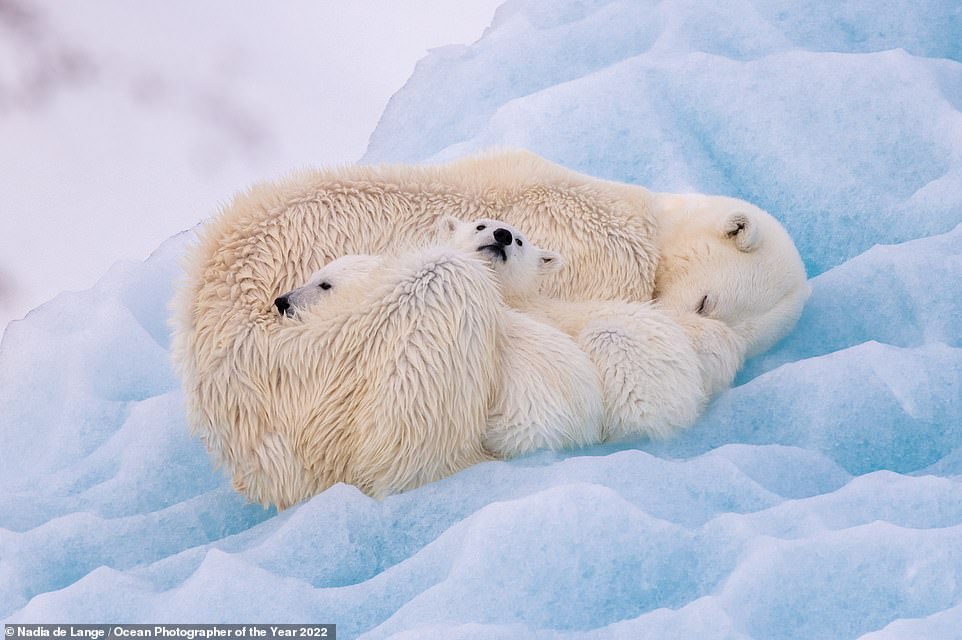 Two polar bear cubs cosy up to their mother in this uplifting photograph captured in Norway by Nadia de Lange. It is highly commended in the Wildlife category 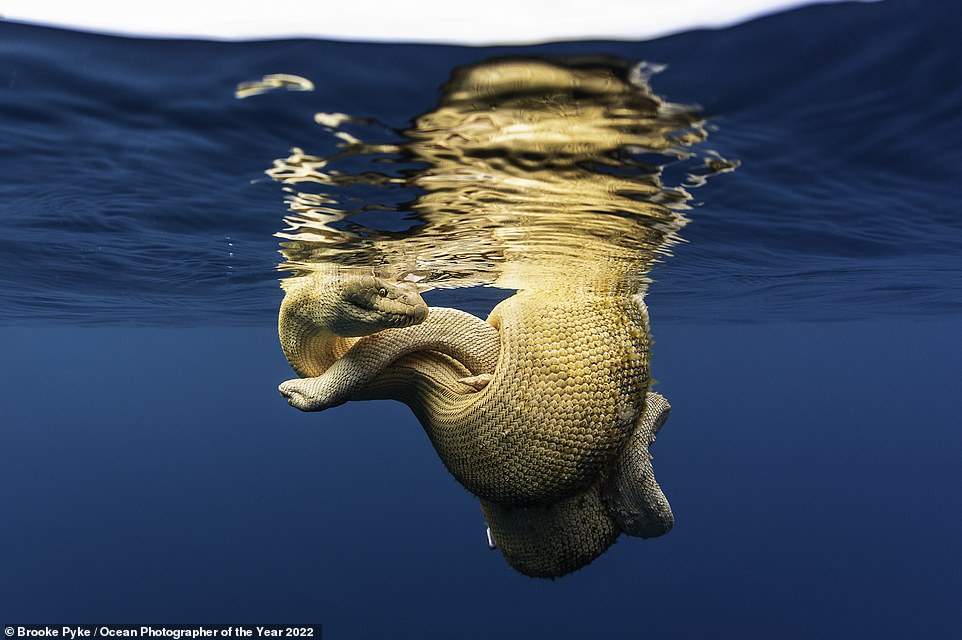 This is one of a series of incredible photographs taken in Western Australia that have earned photographer Brooke Pyke the Female Fifty Fathoms Award, which honours women working in ocean photography. It depicts two Stokes’ sea snakes mating 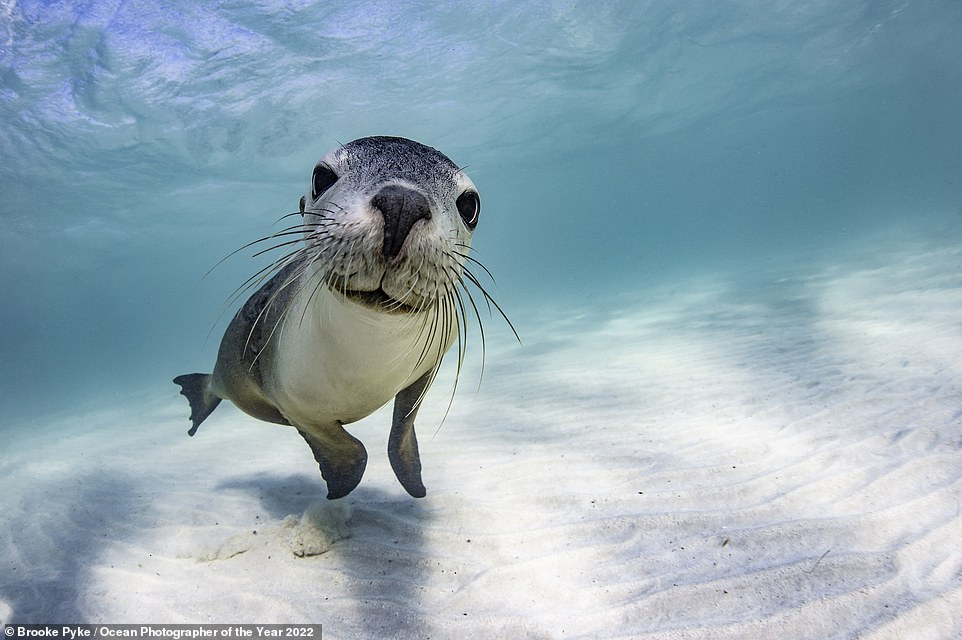 Behold another wonderful photograph by Pyke, this time showing a ‘playful’ sea lion looking at its reflection in Pyke’s camera 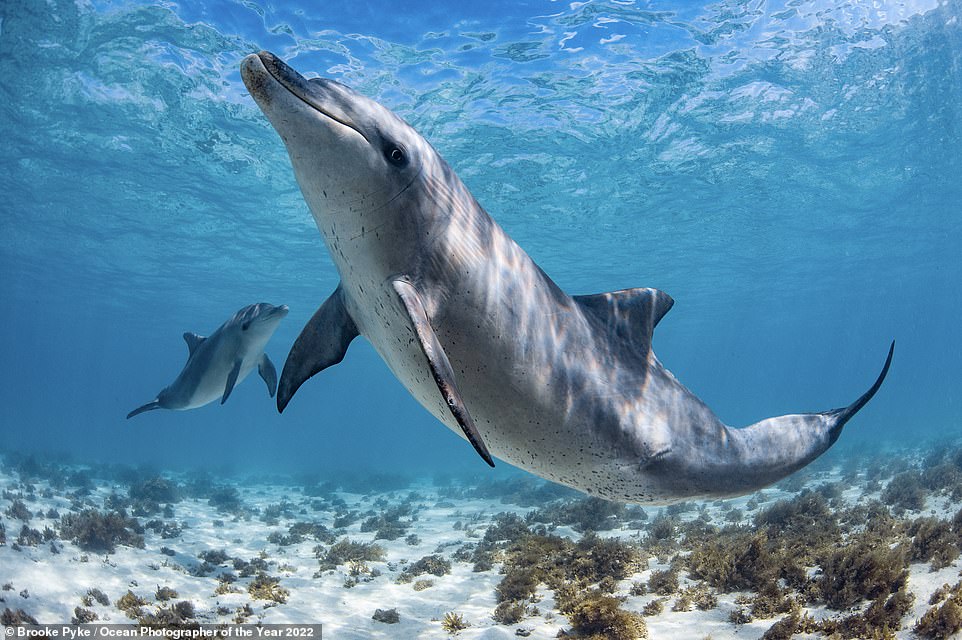 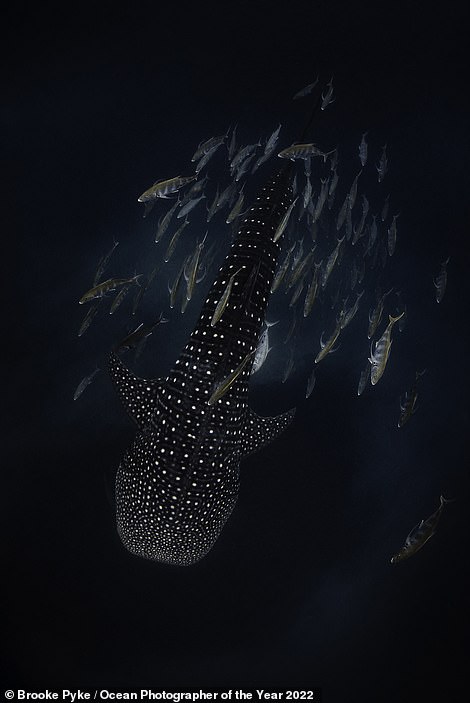 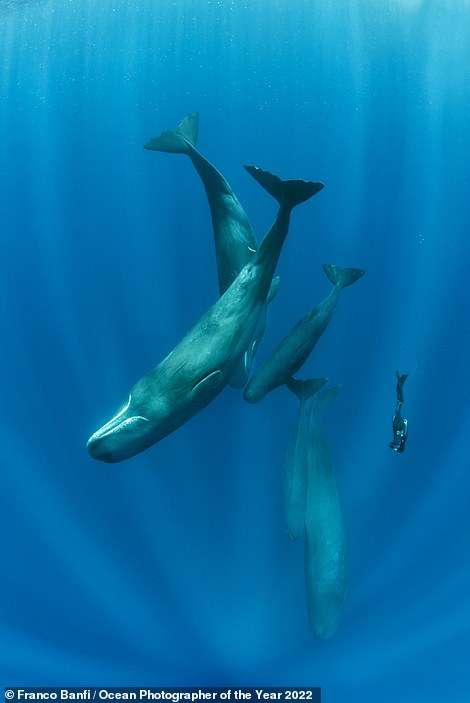 LEFT: Above is a fourth photograph by Pyke, showing a whale shark ‘and company’ swimming in the same direction. RIGHT: Feast your eyes on the gold medal winner in the Adventure category, captured by Franco Banfi. In the shot, which was taken off the coast of Dominica, a freediver swims with a pod of five sperm whales 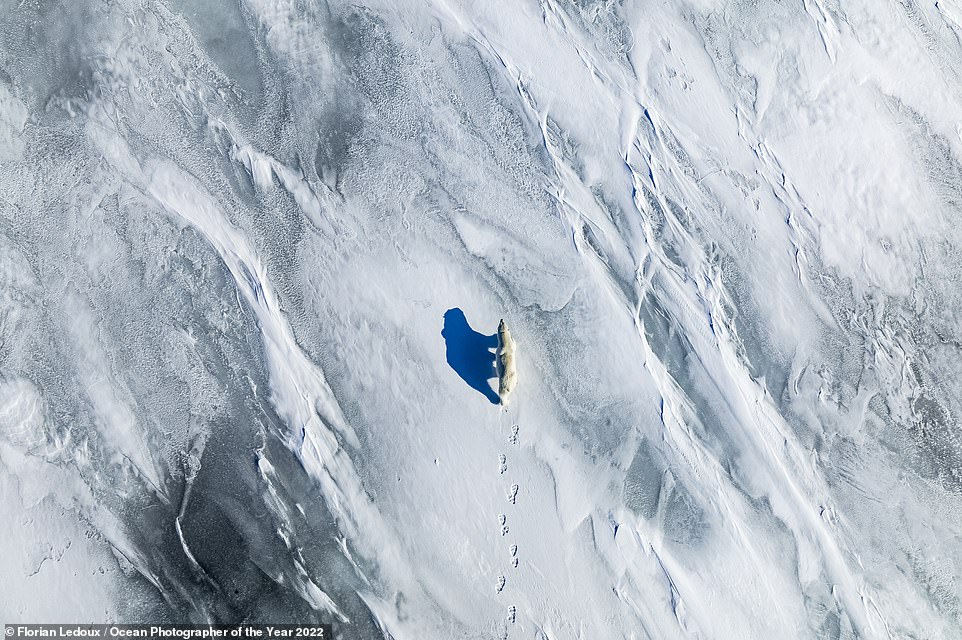 This bird’s-eye shot shows ‘a male polar bear roaming the Arctic’s rapidly thinning and melting spring ice’, photographer Florian Ledoux reveals. The picture, which was captured in Norway, is highly commended in the Conservation category 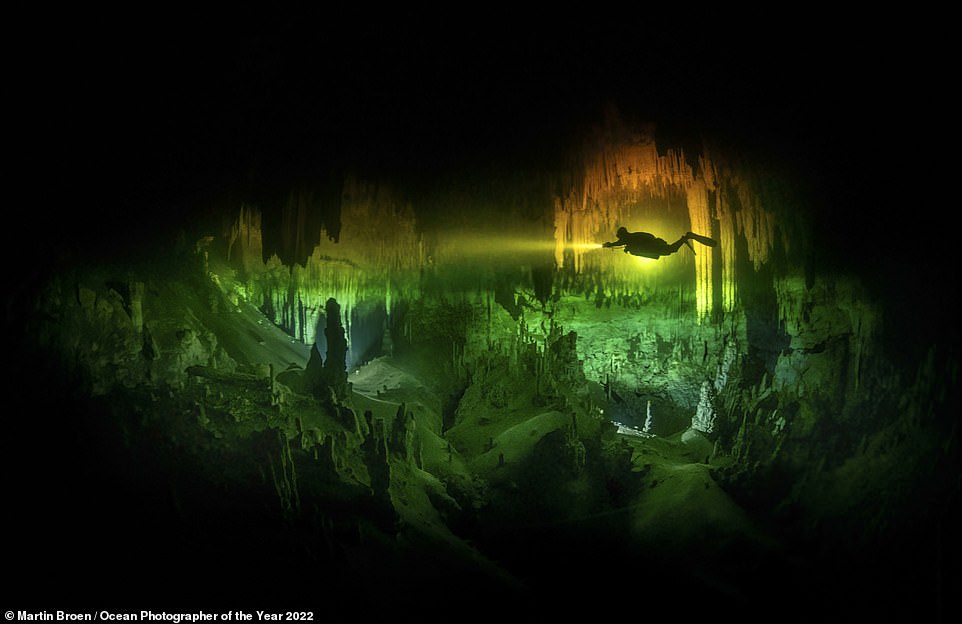 This vibrant picture was taken by Martin Broen in the Chikin Ha cenote [a sinkhole] in Mexico, helping to earn him the silver medal in the Portfolio category. The image demonstrates how tannic acid, a substance released through the decomposition of organic matter, alters the colour of the water and ‘creates a rainbow effect’ 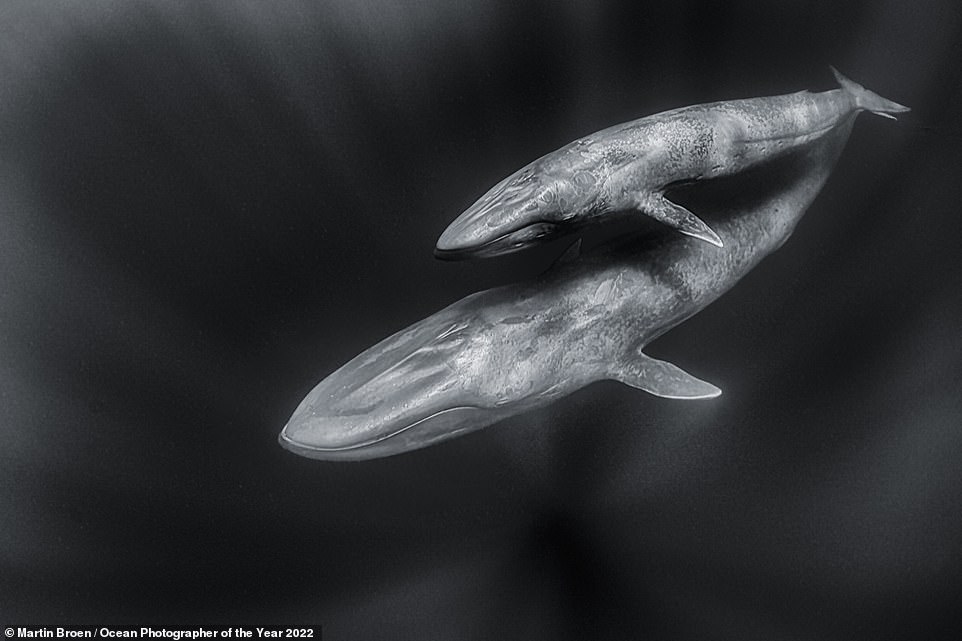 Above, in another sensational picture by Broen, a blue whale mother and her calf can be seen swimming off the coast of the Mexican city of La Paz 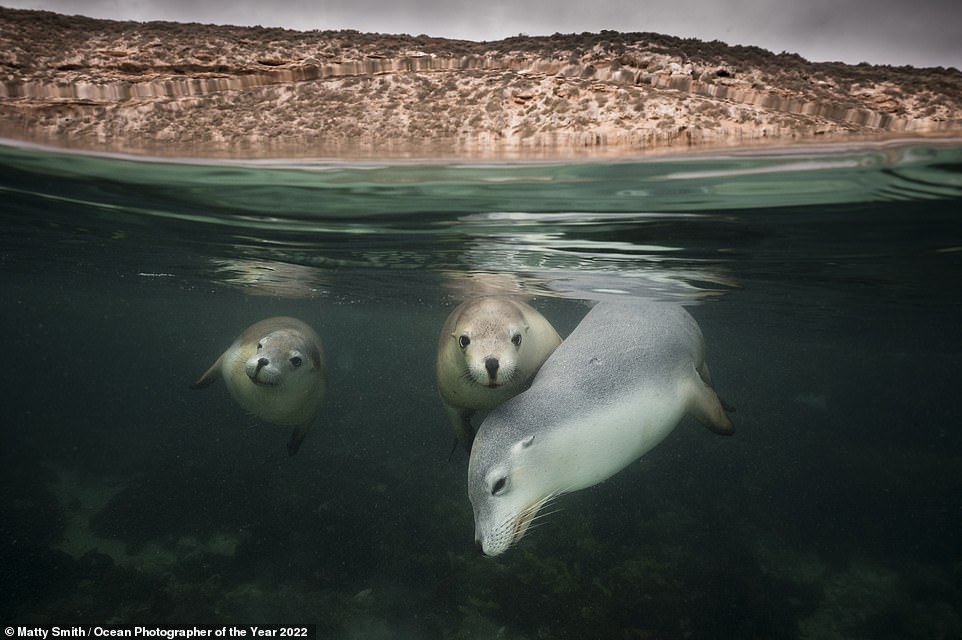 Photographer Matty Smith’s collection of photographs reigns supreme in the Portfolio category, and this ‘family portrait’ of Australian sea lions is one of the brilliant pictures that make up his body of work 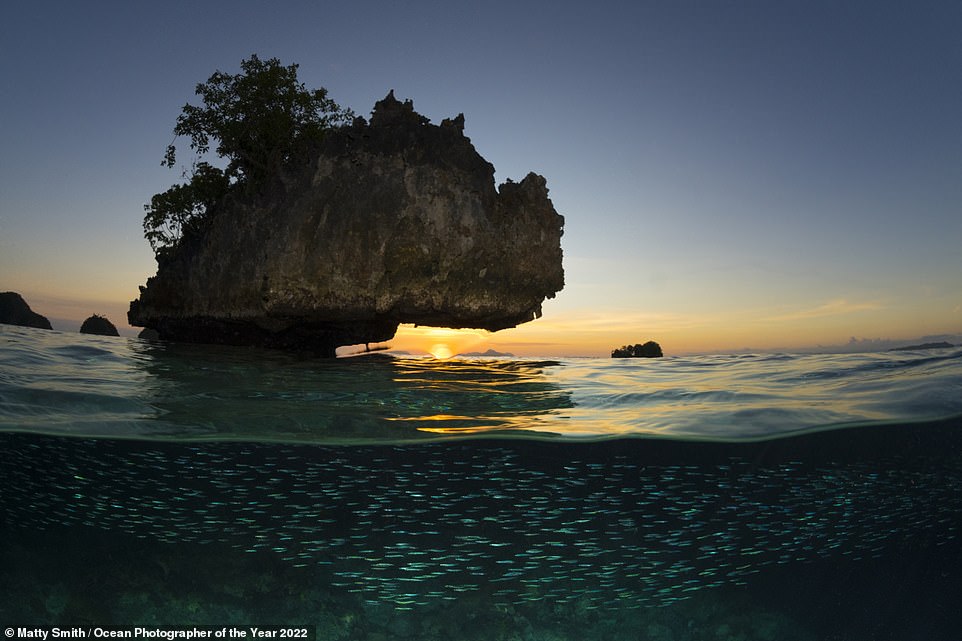 In this, another magnificent picture by Smith, a school of fish gather under an eye-catching rocky outcrop at sunset in the Indonesian archipelago of Raja Ampat 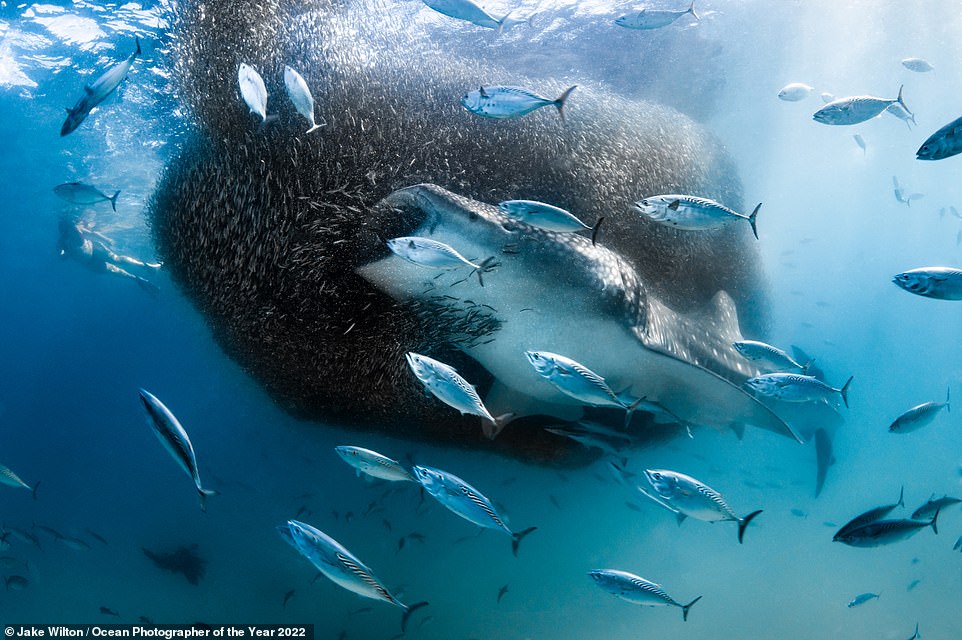 Photographer Jake Wilton, whose portfolio comes third in the Portfolio category, snared this fascinating photograph of a whale shark moving through a bait ball – when small fish cluster together in a circle to protect themselves from predators – in Australia’s Ningaloo Reef 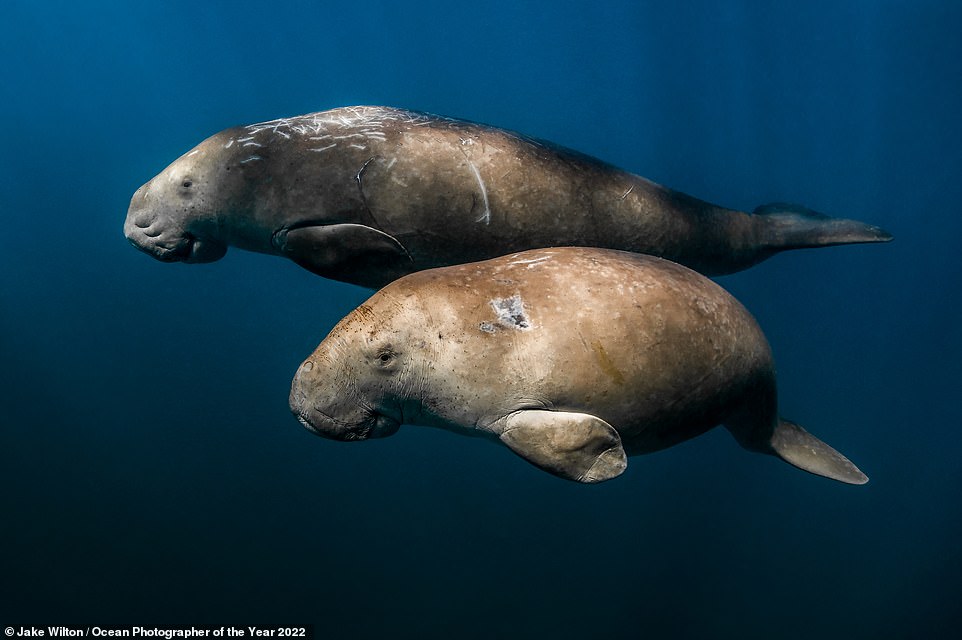 Above is another eye-opening photograph from Wilton’s portfolio. The photographer reveals that it shows a mother and calf dugong pass by the edge of the Ningaloo Reef in search of seagrass to feed on 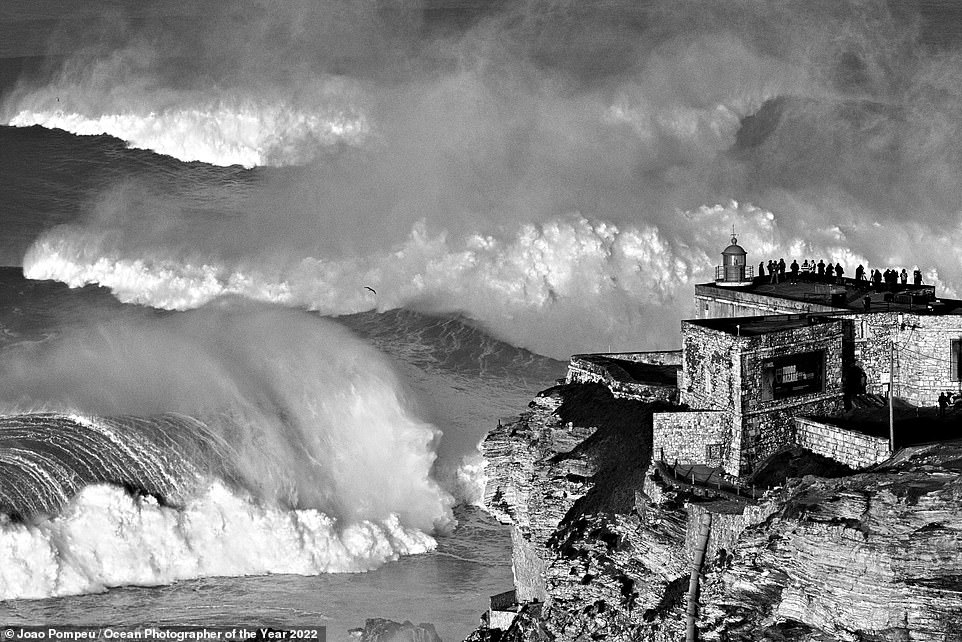 Highly commended in the Human Connection category, this picture shows onlookers ‘dwarfed’ by waves at the lighthouse in the Portuguese town of Nazare. It was captured by photographer Joao Pompeu 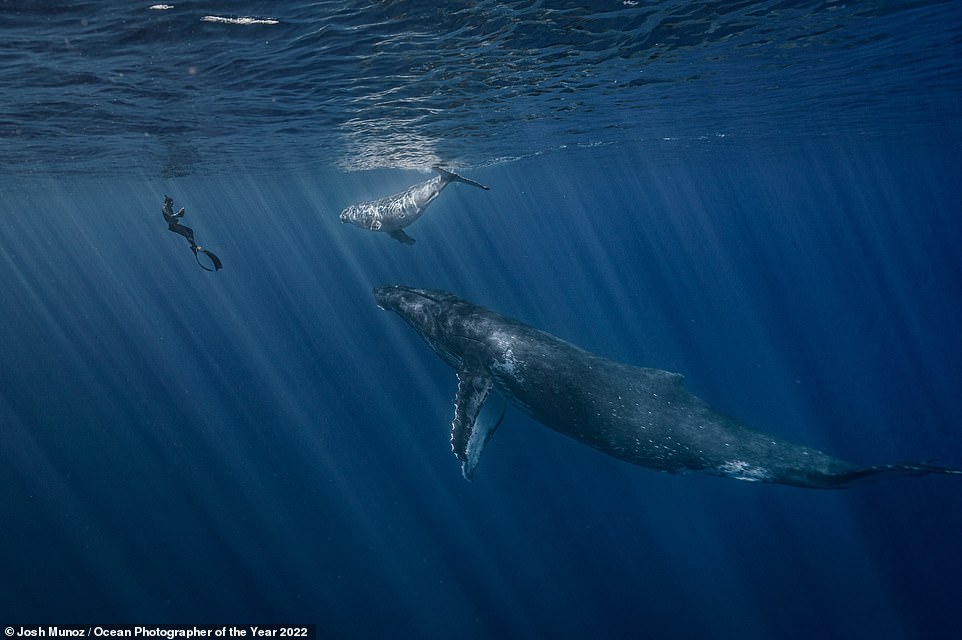 The waters of French Polynesia were the setting for this mesmerising picture of a humpback whale, her calf and a human, snared by Josh Munoz. It’s highly commended in the Human Connection category 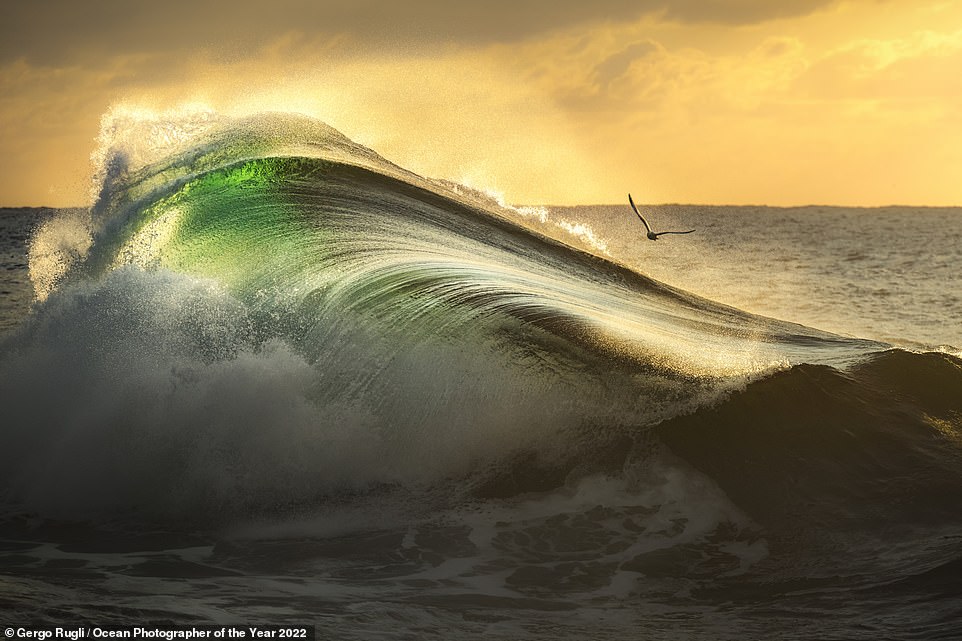 A seagull flies past a breaking wave in the light of the rising sun in this glorious photograph by Gergo Rugli, which was taken in Australia. It’s highly commended in the Fine Art category 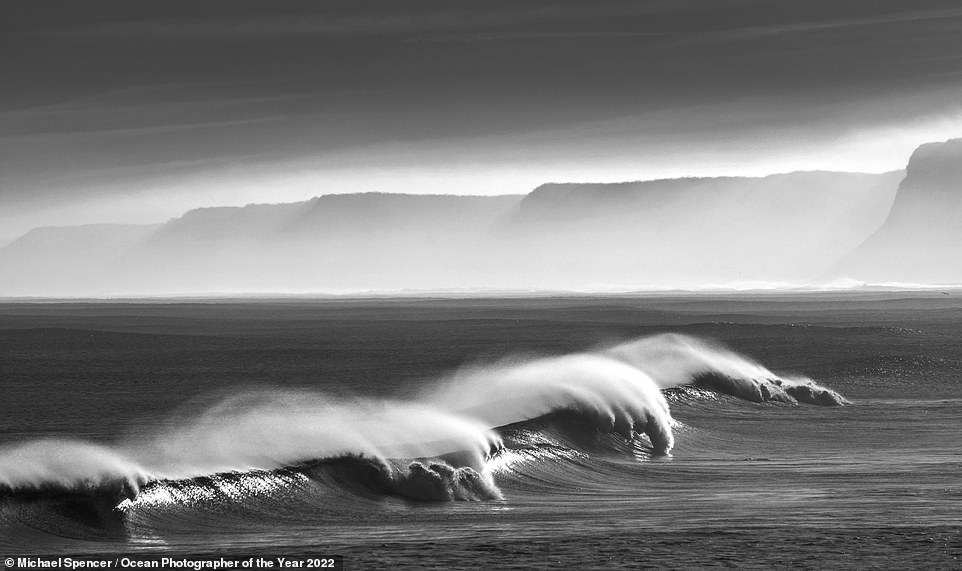 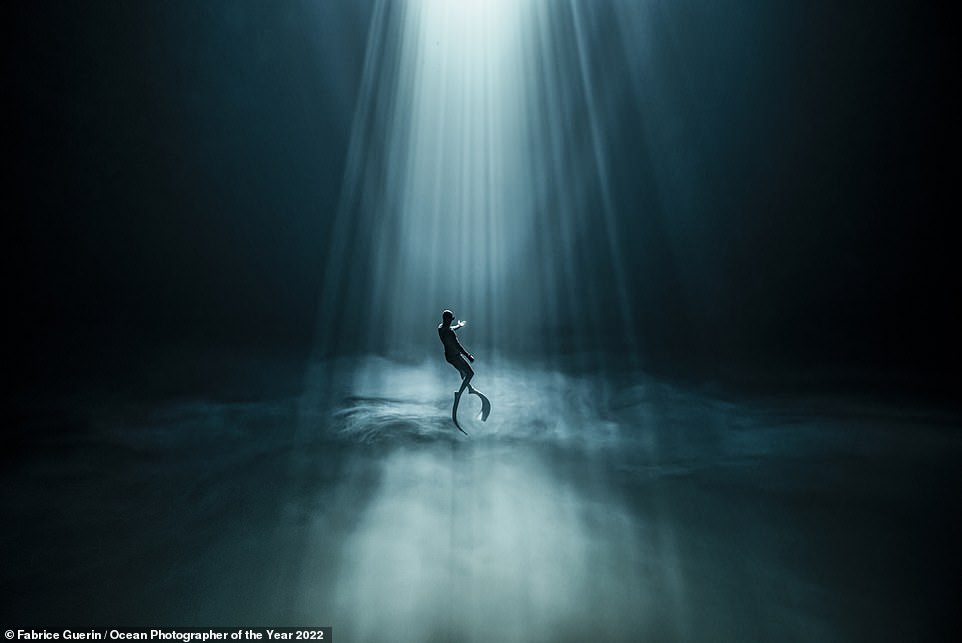 Highly commended in the Adventure category, this amazing photograph sees a freediver ‘hover amongst light beams’ in a cenote in Mexico’s Yucatan Peninsula. Fabrice Guerin, who was behind the lens, notes that the hydrogen sulfide cloud (formed by the decomposition of organic matter in the water) below the figure has been disturbed by the diving 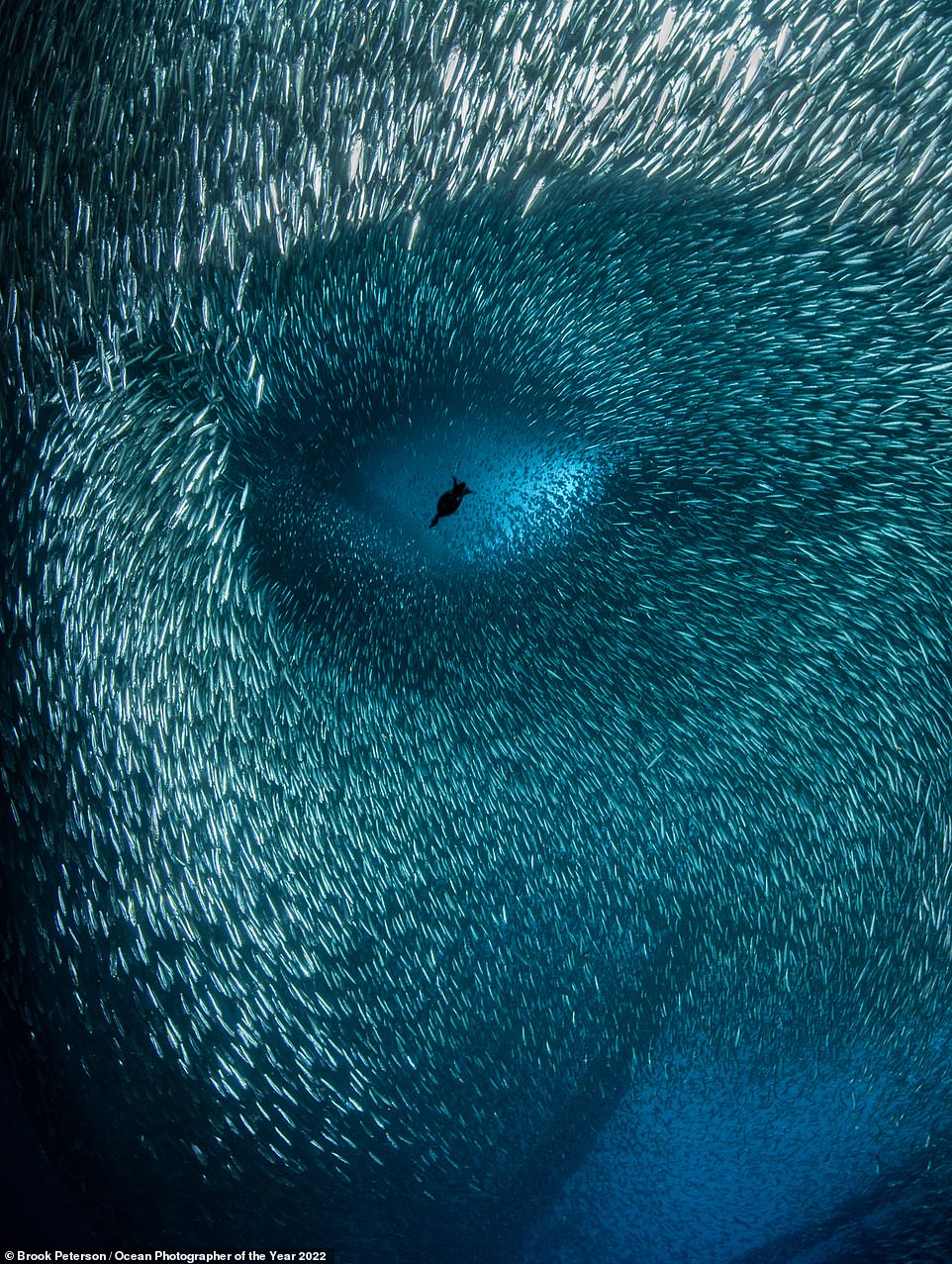 This entrancing picture is ranked third overall in the awards and shows a cormorant [waterbird] diving through a massive school of baitfish creating, observes photographer Brook Peterson, ‘a series of shapes that mimics that of a human face’. The image was captured off the coast of the U.S 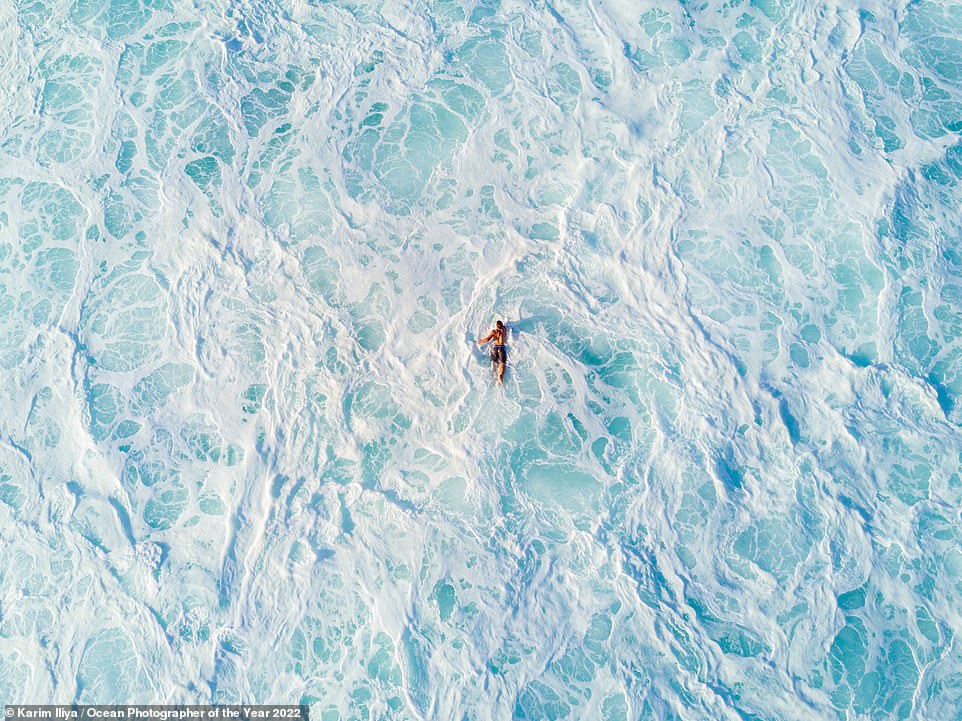 A surfer paddles out through ‘churning white water’ off the coast of Hawaii in this striking shot by Karim Iliya, which is highly commended in the Human Connection category 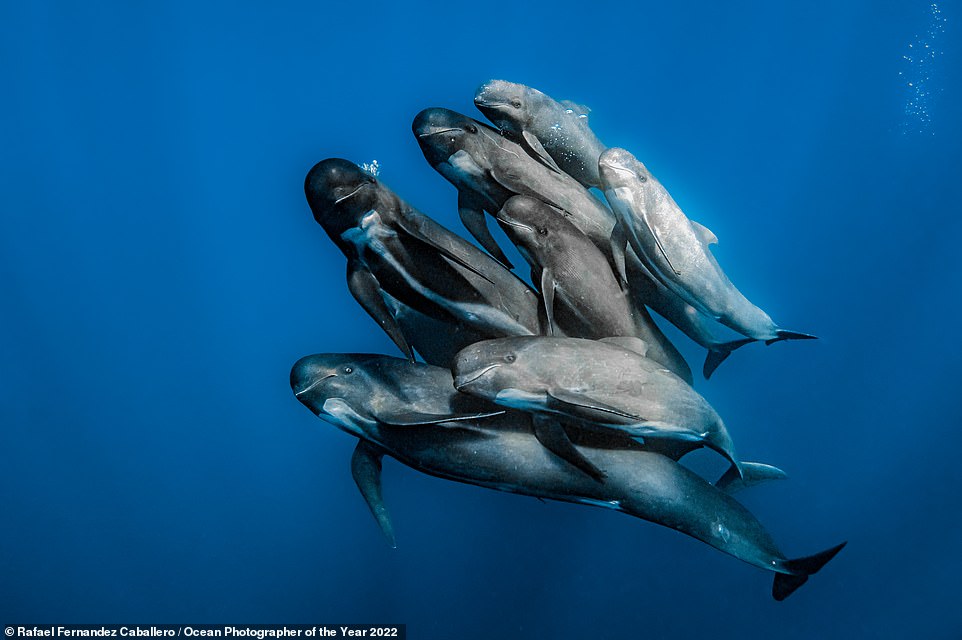 Rafael Fernandez Caballero was behind the lens for this heartwarming shot of a pod of pilot whales posing ‘for a family portrait’ off the coast of Spain. Impressing the judges, it tops the podium in the Wildlife category 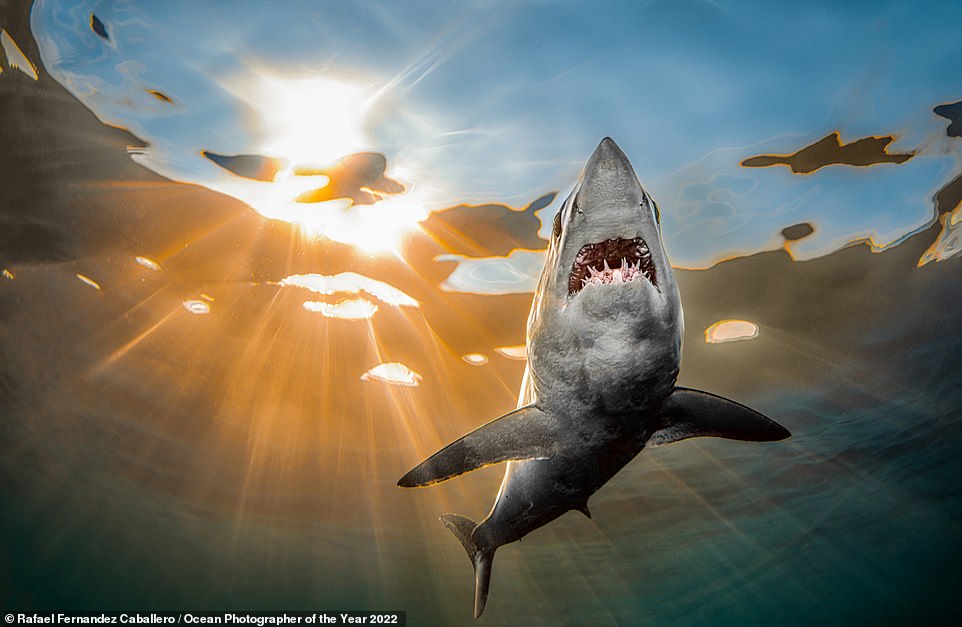 Above is another captivating picture by Caballero, this time showing a mako shark – ‘the fastest shark in the ocean’, he reveals – speeding beneath the setting sun off the coast of Spain. It’s highly commended in the Wildlife category 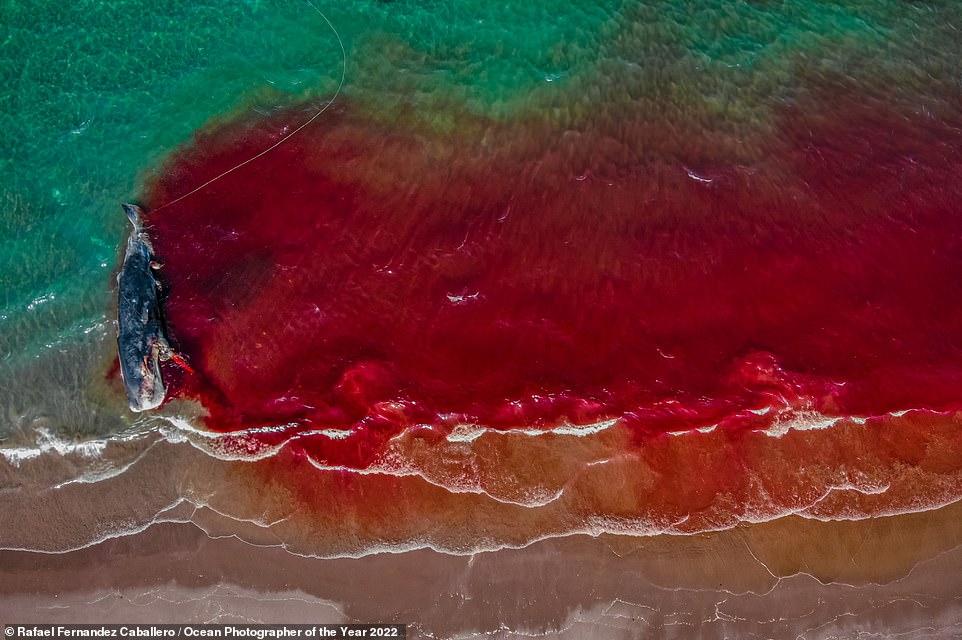 This poignant photograph, also by Caballero, shows ‘a dead sperm whale, beached and bloody, its tail showing signs of entanglement’ along the Mexico coast. Compelling the judges, it’s second in the Conservation category 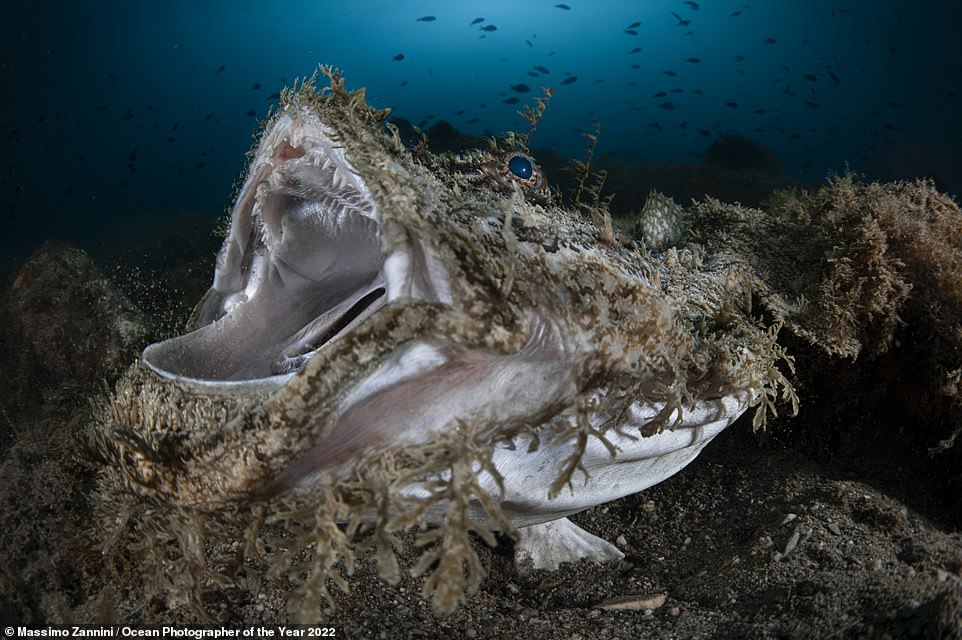 A goosefish feeds in shallow water in Italy in this eye-catching picture by photographer Massimo Zannini, which is highly commended in the Wildlife category 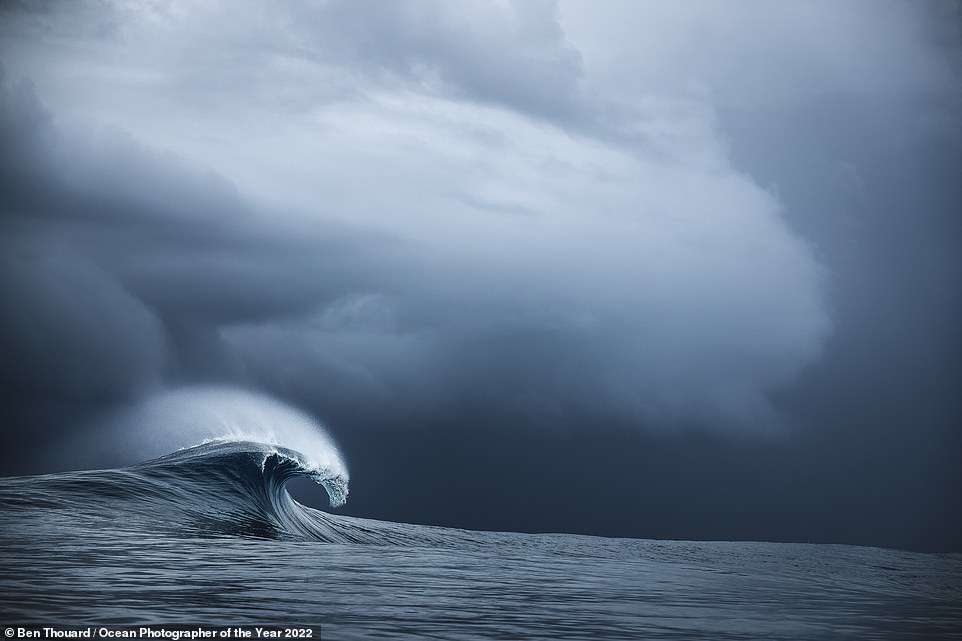 This shot, captured by overall winner Ben Thouard, is highly commended in the Fine Art category. Snared in French Polynesia, it shows ‘a solitary wave breaking in the final moments before a storm rolls in’ 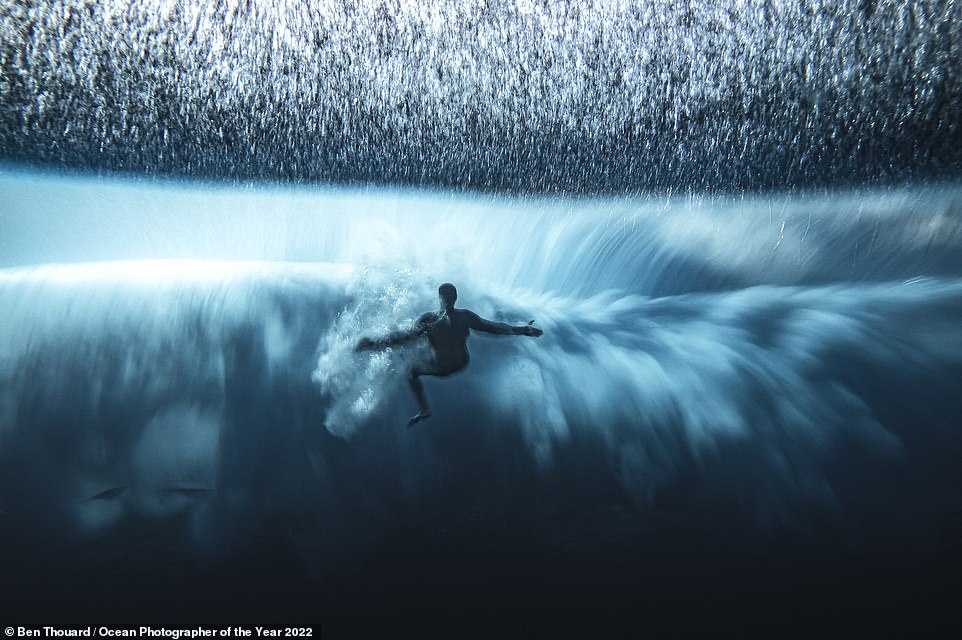 Drum roll, please… this is the picture that has bagged Thouard the title of Ocean Photographer of the Year. Captured off the coast of the French Polynesian village of Teahupo’o, it shows a battle with the underwater turbulence created by the famously heavy ‘Teahupo’o wave’. The danger posed by a Teahupo’o wave is notorious, with Thouard revealing that the village’s name translates to ‘place of skulls’