The joy YOU helped bring to a besieged Ukrainian village

The joy YOU helped bring to a besieged Ukrainian village: Mail Force mission delivers 500,000 food parcels thanks to the generosity of readers

They spent weeks under the menacing occupation of Russian soldiers who sealed off their village to the outside world, looted the grocery store and would not let them leave home even to buy food.

Russians also cut the power supply, making life extremely tough for even the hardiest residents of Shybene during the freezing winter.

But grateful villagers were finally looking forward to cooking a hearty dinner last night after the Daily Mail handed over food boxes – thanks to donations from our kind-hearted readers.

The Mail Force mission to deliver 500,000 of our food parcels to the warzone – in a joint-operation with the Ukrainian embassy in London – rolled into the village yesterday.

‘Thank you,’ beamed eight-year-old Dominika as she balanced one on the handlebars of her bicycle. Her hungry brother Denys asked if we had any borscht soup, Ukraine’s national dish, which he said was his favourite

Shybene – 40 miles north of Kyiv – was occupied by Russian troops during the first days of the war and was the scene of fierce fighting. A few miles up the road is the town of Borodyanka, which remains a scene of utter devastation.

There were long queues outside Shybene’s community centre, where volunteers handed out food aid to people who until a few weeks ago were swamped by hundreds of enemy soldiers and tank units preparing for an all-out assault on Ukraine’s capital.

Such was the speed of Vladimir Putin’s shock invasion that many of the villagers had not been able to flee, and were forced to live hermit-like inside their homes as war raged around them. It is a poor area where the locals live hand-to-mouth at the best of times, so they were overjoyed when they received boxes full of pasta, tomato sauce, porridge, beans and tortilla wraps. 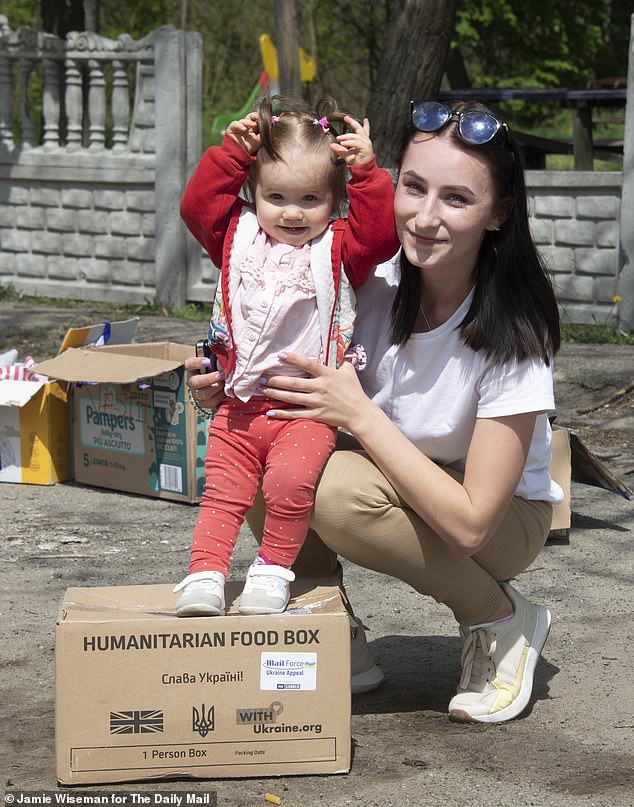 Young mother Valentyna, 21, drew coos from other women gathered around as she playfully sat her one-year-old daughter Veronika on top of one of our boxes

Calling upon that human spirit, we are now launching an appeal to raise money for refugees from Ukraine.

For, surely, no one can fail to be moved by the heartbreaking images and stories of families – mostly women, children, the infirm and elderly – fleeing from Russia’s invading armed forces.

As this tally of misery increases over the coming days and months, these innocent victims of a tyrant will require accommodation, schools and medical support.

All donations to the Mail Ukraine Appeal will be distributed to charities and aid organisations providing such essential services.

You can donate via CAF America at: https://donations.cafamerica.org/mail-force/

US readers can donate to the appeal via a bank transfer to Associated Newspapers or by sending checks to dailymail.com HQ at 51 Astor Place (9th floor), New York, NY 10003.

Checks in the US need to be made out to ‘CAF America’ and have ‘Mail Force Ukraine Appeal’ in the memo.

Each 8kg box has 14 items containing enough calories to last someone for one week.

‘Thank you,’ beamed eight-year-old Dominika as she balanced one on the handlebars of her bicycle. Her hungry brother Denys asked if we had any borscht soup, Ukraine’s national dish, which he said was his favourite.

It prompted a chuckle from his mother Varvara, 29, who said: ‘He is always hungry. Thank you so much.’

Young mother Valentyna, 21, drew coos from other women gathered around as she playfully sat her one-year-old daughter Veronika on top of one of our boxes.

She said that during the occupation, she was interviewed by a Russian news crew who handed her a food box. ‘There was nothing in it except a few potatoes,’ she added. ‘They just did it for propaganda.’

But she was thrilled to discover that this plentiful box of goods had come all the way from Britain – thanks to Mail readers. Valentyna said: ‘I am very grateful to the people who are helping us and supporting us at this time of such grief. It is a real help. Thank you.’

The campaign has been funded from the incredible £13million donated to our Ukraine Appeal, which was kick-started with £500,000 from DMGT, the Mail’s parent company, at the request of Lord and Lady Rothermere.

On Wednesday Mail Force was named Editorial Campaign of the Year at the British Media Awards. It is the third major award the appeal has won.

While the fighting has stopped in Shybene, the whole area bears the awful scars of war. The local grocery store is smashed up after it was looted by Russian troops who got drunk on vodka and whisky.

Grandmother Tetyna, 52, said: ‘During the occupation we tried to help each other out but it was very hard because we could not escape from our houses. There were Russians everywhere all the time. It was very scary. There were days when there was nothing to eat.’ 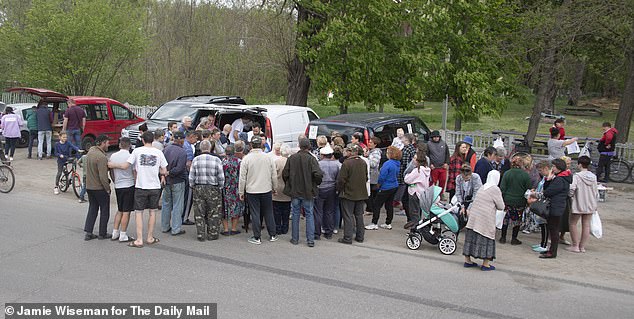