The joys of a road trip in Scotland, taking in Mallaig, the Isle of Skye, Loch Duich and Ullapool

Clare, a retired painter, says: ‘Don’t get me wrong, girls, half the time I’m bored witless.’ We’ve met over a glass of wine (our first, her fifth) in Ullapool, an arty spot deep in the Scottish Highlands. ‘Then I look out of the window and remember I wouldn’t want to be anywhere else.’ Clare’s hand sweeps across the landscape as she explains why she left London and relocated to this wild, rural place.

It’s the first lengthy conversation my friend, Phoebe, and I have had with anyone but each other in nine days. You can go for miles across the Highlands without meeting a soul. We have been looking out of the window a lot, too.

Having travelled the globe — even as far as New Zealand — in search of life-affirming landscapes, we discover it can all be found up the road (and on the road). In Scotland. And to experience it in autumn is an added bonus.

Super sight: Views of Ullapool harbour on Loch Broom in the northwest of Scotland

We are driving up the western shores, often dismissed in favour of the North Coast 500 route, but arguably more spectacular (the scenery takes centre stage in the Harry Potter films) and definitely quieter, with its single-track roads snaking around steamy lochs and kyles.

Our sense of isolation is exacerbated by the loss of our baggage en route to Glasgow Airport. We struggle to find anywhere in the mountains to buy pairs of pants.

From Glasgow, we travel to Fort William by train, pick up our hire car and set off. Our first stop is Mallaig, to catch the ferry to Skye. 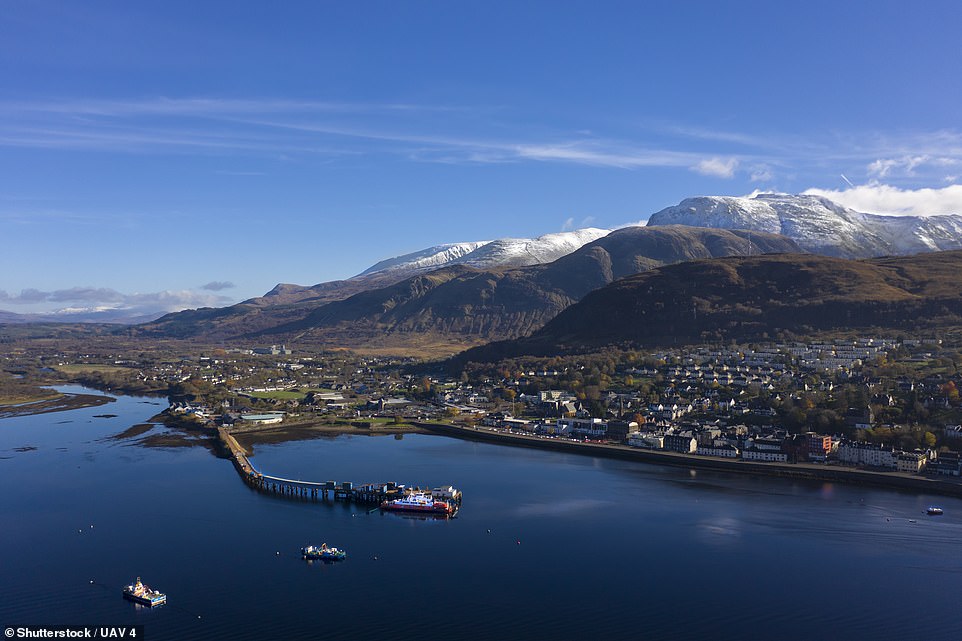 Francesca picked her hire car up in Fort William. This aerial view shows its harbour and the mighty Ben Nevis beyond 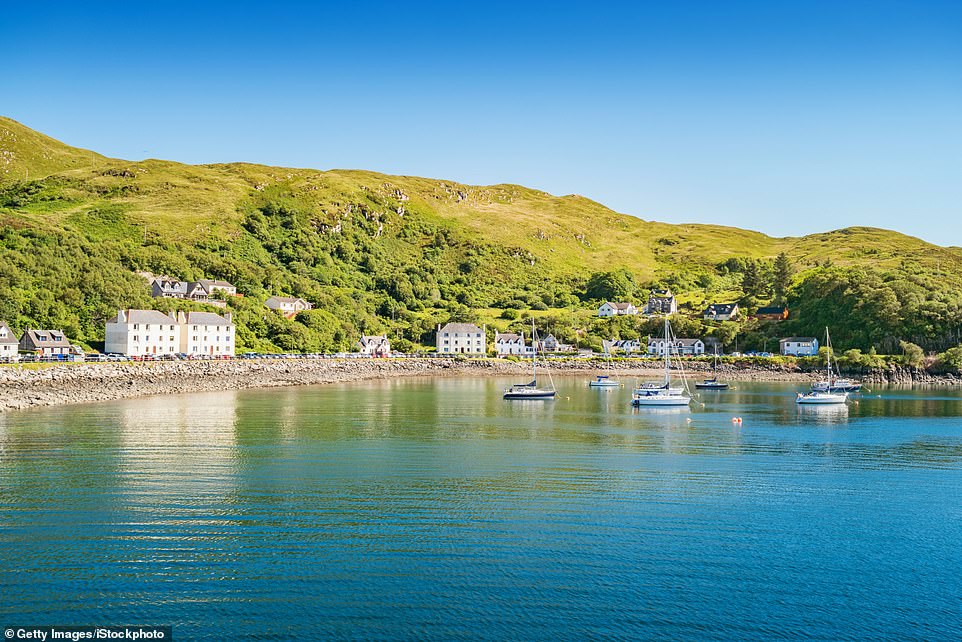 This panoramic picture shows Mallaig’s port area, with the islands of Eigg (left) and Rum (right) on the horizon to the west

Checking the map, I realise driving in the Highlands will be easy – every town has just one road linking it to the next. Thankfully, there is (just about) no such thing as a wrong turn.

Mallaig’s haunting squall of seagulls pales into the distance as we approach the silent, coniferlined coast of Skye, its sandy beaches glistening with seaweed. We marvel at how removed we feel, our worries shrugged off on the mainland.

On Skye, the roads are empty — single-track winding lanes with passing places — and we follow signs to Tarskavaig, a crofting village on the Sleat peninsula. 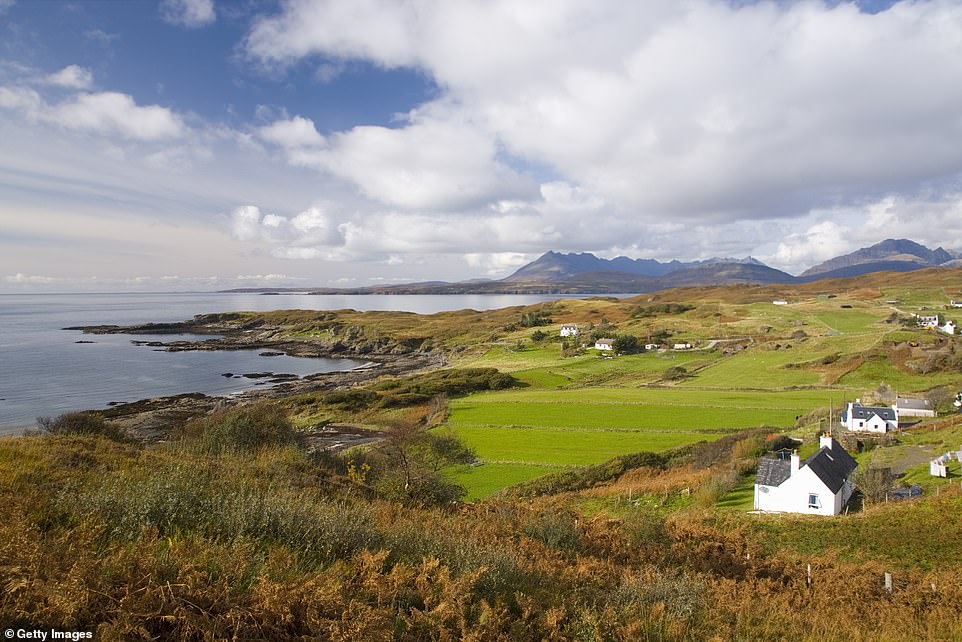 The crofting village of Tarskavaig on the Isle of Skye, with the Cuillin Hills in the background

Rum View cottage, owned by Janet of the MacDonald clan, who fought over the land in the 1600s with the equally esteemed MacLeods, is the perfect base from which to explore the Cuillin, the island’s menacing mountain range. There is only one hike in our guidebook rated less than ten out of ten for difficulty.

The Vikings named the island Skuyö (the cloud island), and clouds dictate the mood.

It’s win-win. When there are none, people congregate disbelievingly in sunshine outside pubs. Yet when the clouds roll in, the bad weather here isn’t the same as anywhere else. It’s beautiful. The rain brings steamy mist which hangs above lochs and conceals mountain peaks. The wind plays tunes. Post downpour, the greenery glows and the air has a peaty scent. 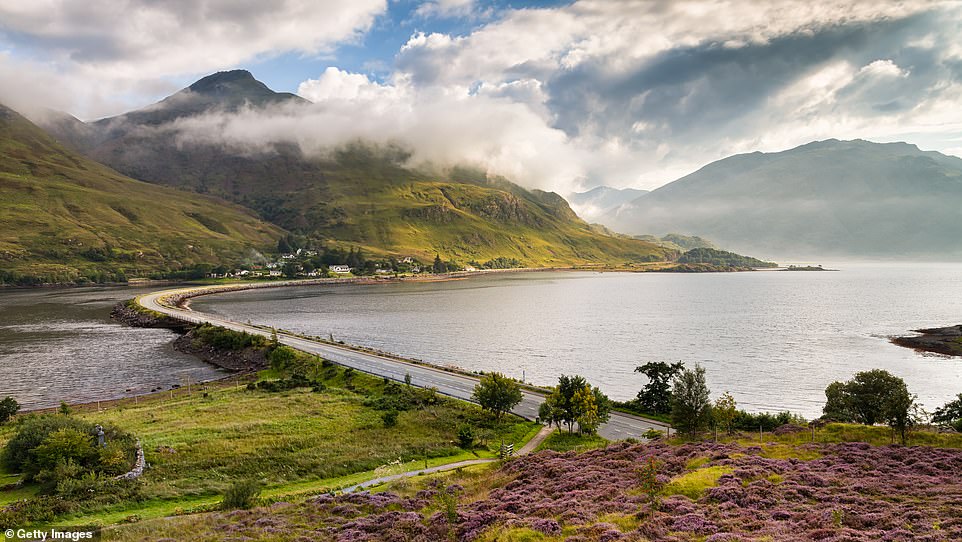 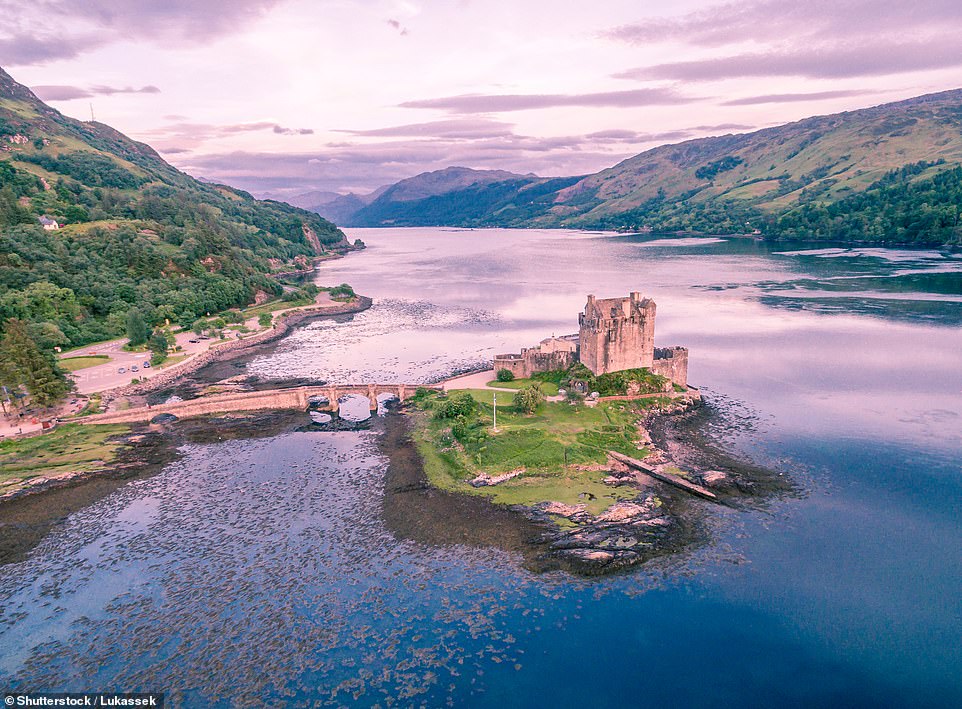 The 13th-century Eilean Donan Castle, which sits on an island at the meeting point of three sea lochs – Duich, Long and Alsh

Back to the mainland over Skye Bridge and on to our next stopover: the Magic Bus, a minibus converted into a self-catering candlelit cocoon, tucked into a glen above Loch Duich. It’s basic, with a compost loo and wood-burning stove, but we’re happy drinking tea and watching the fog rise on the hills. The loch is also known for the picturesque 13th-century Eilean Donan Castle.

The next day we head to Applecross along the forbidding Bealach na Ba Road, which winds around a glacial valley.

The fog is thick and we crawl forwards, on high alert for the glimmer of headlights. 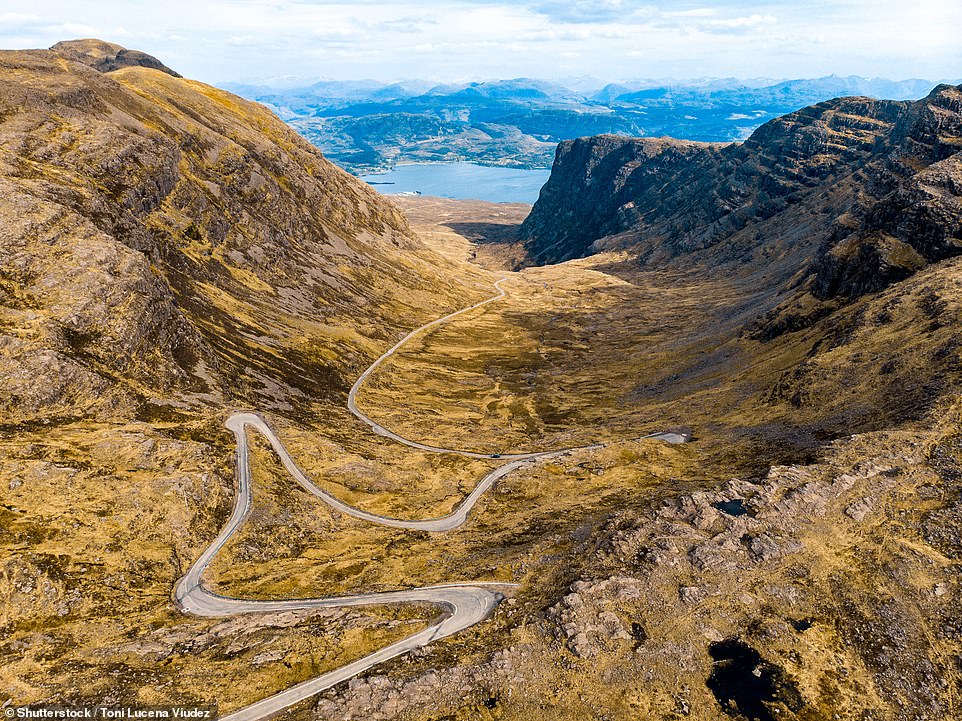 The forbidding – and extremely photogenic – Bealach na Ba Road, which winds around a glacial valley 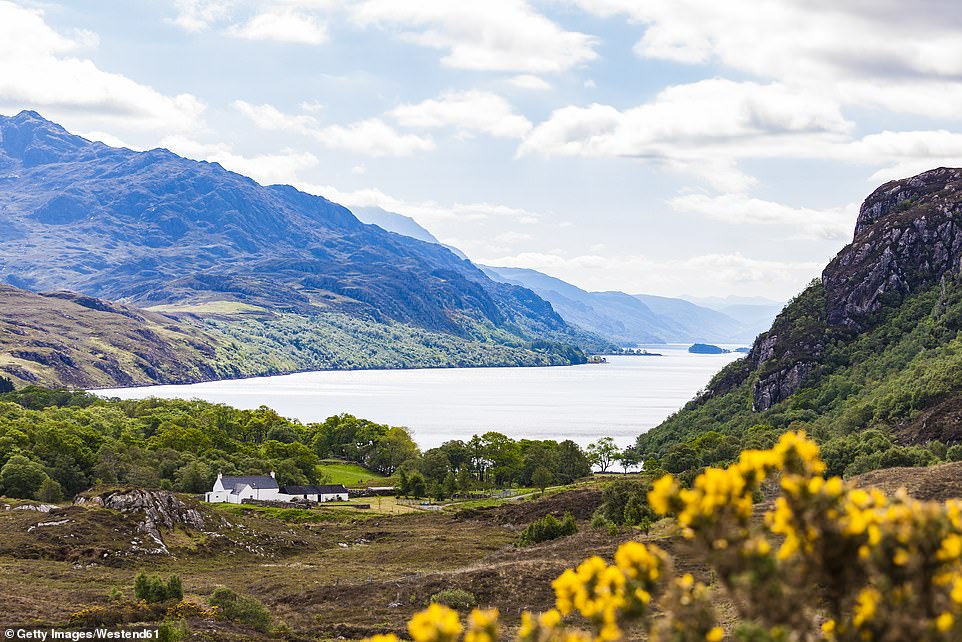 Loch Maree in the Highlands, which was visited by Queen Victoria. She reportedly had a tartan fetish 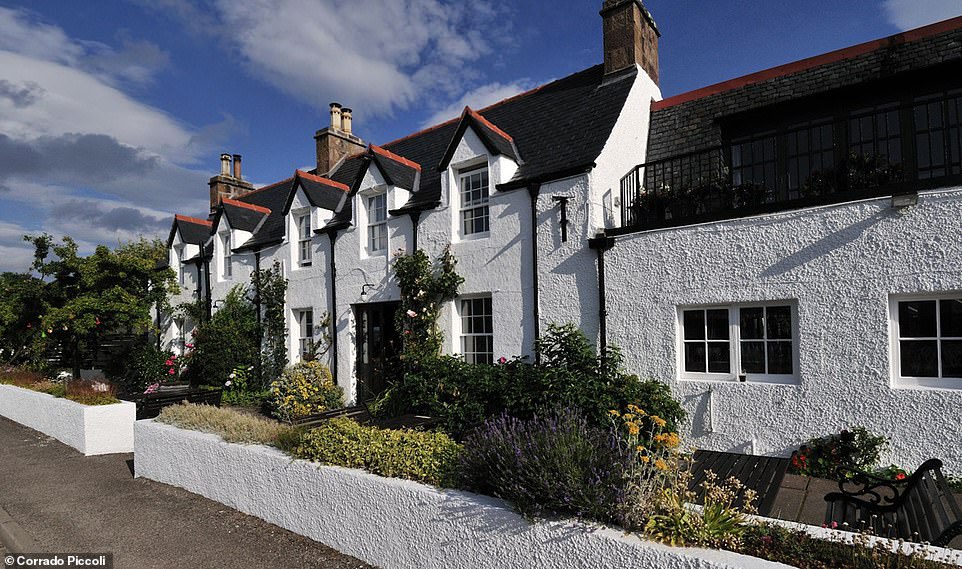 The Ceilidh Place (pictured), is a rose-clad institution where people from miles around gather for live music and the freshest fish, writes Francesca

That night is spent in a log cabin on the shores of Loch Maree, visited by Queen Victoria, who reportedly suffered from a tartan fetish. As we nudge ever northwards, English takes second place to Gaelic on road signs and then, finally, we reach the old herring port of Ullapool, with its galleries, theatres and bookshops.

The Ceilidh Place (where we meet our loquacious painter friend) is a rose-clad institution where people from miles around gather for live music and the freshest fish.

That evening we find an impromptu bagpipe concert in a car park — teenagers puffing away, eyes bulging, kilts blowing in the wind. What a place. What a trip.