By Kate Johnson For The Daily Mail

‘We’ve walked all the way from Branscombe,’ my mother and I tell everyone about our two mile odyssey to Beer. It’s taken us hours, but the South West Coast Path is steep, narrow, slippery and we often stop to admire the views over the treetops to the sea. Also, Mum is 80.

The older I get, the more I appreciate our holidays together. My mother never complains (me, after we’ve been caught in a deluge, ‘I’m wet through! Aren’t you?’ Mum: ‘Not at all!’ as she wrings out her walking socks).

She’s cultured, with an MA in architectural history, and might prefer a three-hour guided tour of the crypt at St Paul’s, but when I suggest nothing more intellectual than a massage at the Green Room in Beer, she can’t think of anything nicer.

Afterwards, the masseuse laces up Mum’s enormous walking boots for her. People are kind to mothers and daughters on tour. We’re staying at the Masons Arms in Branscombe. Our garden room is behind the pub with French windows opening on to a mass of green shrubs.

Branscombe is a deep lush valley, approached by winding roads with overgrown hedgerows. It’s a few minutes from the mile of shingle beach, part of the East Devon and Dorset Jurassic Coast.

Walking offers a chance to chat. I thought I knew Mum’s stories, but I don’t. Her father was so obsessed with cricket that he spent his honeymoon arranging pebbles on the beach to explain the fielding positions to his new wife. 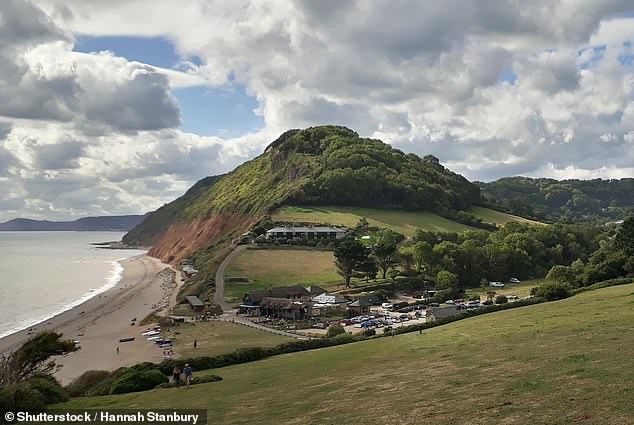 The dramatic Jurassic coast, the village of Branscombe and its mile of shingle beach

Her brother Mark was just a boy when he underwent two ground-breaking lung operations performed by pioneering surgeon Clement Price.

When it was announced that Mr Price would operate on George VI, Mark wrote to the King to say: ‘Don’t worry, I’ve had the same operation and it’s fine.’ And received a reply.

One evening, I explain Google maps to her. We then set off for dinner at Hugh Fearnley-Whittingstall’s River Cottage Kitchen in nearby Axminster. I have no phone signal and I’m lost from the moment we leave the carpark. Mum calmly opens her giant book of maps and expertly navigates us to the restaurant.