Linus Morton had a knife in his belt by the time he was seven or eight. Today, he wields it deftly as he cuts selected mushrooms, brushes away the soil, and gently places them respectfully in his wicker basket.

My husband Ron and I are in Northumberland’s Kielder Water and Forest Park to join Linus, a foraging guide and chef, for a half-day of what’s called ‘Wild Food Foray’.

We travel from our base at Battlesteads Hotel, near Hexham, after a day spent admiring red squirrels and walking a stretch of the 26-mile Lakeside Way. For outdoor enthusiasts, there’s no better Northumberland destination, with such an extensive choice of activities including water sports, mountain biking and running.

It’s at Kielder Village Campsite where we meet Linus, who founded ‘Northern Wilds’ with Louise Hepworth. They live together and share a passion for sustainable living and environmental issues.

We speedily suss out that Linus is an expert. He skillfully navigates the mossy forest floor, identifying mushrooms using more than 20 years’ experience of picking wild ones. His six-year-old son is following in his foraging footsteps – he already has a knife and learns how to use it from this bushcrafter.

We follow Linus, but I struggle at times to keep up. A hazel stick helps me steady myself, as he shares his beloved world, one he visits daily to collect seasonal produce such as mushrooms, seeds, plants, herbs, berries and nuts. 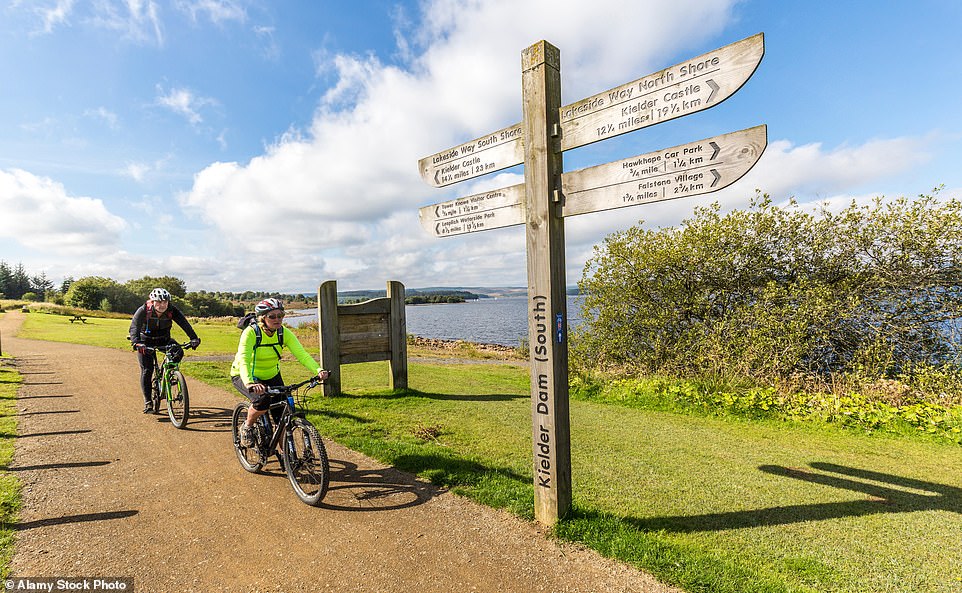 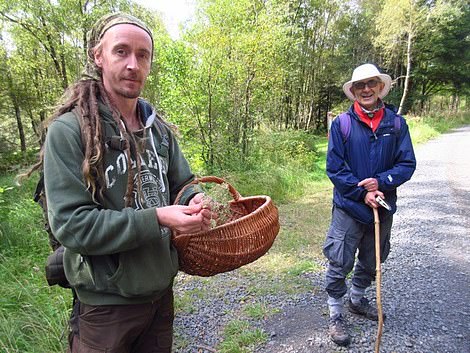 Linus Morton, who led the tour, with some foraged produce and Louise’s husband, Ron

‘Foragers tend to look after the forest. It’s a special place,’ he says. Which seems an understatement.

We learn that to eat mushrooms you must be certain on identification, including concave or convex, colour and texture; also whether they’re smooth, shiny, furry or velvety and if they have folds or gills.

Linus demonstrates this when identifying a Bay Bolete, by looking at the pores and pressing it until it stays blue. We move through the woods and he spots restaurant-quality Chanterelles, confirming one is real -its gills ‘splay like a river delta’.

Inexperienced foragers need to beware as there are poisonous lookalikes. Thankfully, we don’t meet any venomous adders. But it’s still a scary time. Linus identifies a striking Panther Cap (same family as The Death Cap, and The Destroying Angel), a Beechwood Sickener and a Purple Stocking Webcap. All poisonous. ‘Don’t munch on a hunch,’ he says.

Next to a Western Hemlock tree, Linus suggests we taste its tender, yellow, needle leaf tips.

Hemlock? Isn’t that the stuff of Shakespeare’s poison potions? However, we trust our guide implicitly, so savour the lemony flavoured tips.

Towards the end of the foray, there’s sheer joy as Linus spots Porcini, also known as ‘the king of mushrooms’, which has bloomed after late summer rainfall.

Linus tells us it’s bad form for a forager to tell another where produce is, saying: ‘I’ll give them precise information to end up in a bog!’

Back home, Ron’s alerted by radio news about Fantastic Fungi, a renowned documentary which is available in the UK in cinemas (virtually) and On Demand.

Our fungi radar’s activated we’re in mushroom mode after our foraging session. We think about Linus, who loves and lives the forest, and what he’s collecting for dinner.

Forage And Feast tours run from August to October, £65 per adult, £45 for children under 16 (northernwilds.co.uk) B&B Doubles at Battlesteads Hotel from £115 (battlesteads.com).