The King And I comes to the London stage

But when Ken Watanabe’s King of Siam finally gets his hands on British governess Anna Leonowens in the new Broadway revival of The King And I, your emotions are so engaged that for a split-second you feel like you’ve been Tasered.

Every second of Bart Sher’s Tony award-winning production of the Rodgers and Hammerstein musical has led up to this point. Charismatic Japanese film star Watanabe is regal and seductive on stage. Anna, played by the darling of Broadway, Kelli O’Hara, is tiny and radiant in an antebellum crinoline the colour of full-bloom lilac.

Yul Brynner in the 1956 film. He made the role of the king his own, playing it more than 4,500 times on stage and winning an Oscar in 1957 for the film version

Their polka is transgressive; it’s tender, it’s potent and it’s the only time they will ever celebrate their forbidden love. No wonder The New York Times labelled the show a five-handkerchief masterpiece.

Now it’s coming to the UK, unusually with the two leads still starring, and opens at the London Palladium in June.

Until now any mention of The King And I has been synonymous with American star Yul Brynner. He made the role of the king his own, playing it more than 4,500 times on stage and winning an Oscar in 1957 for the film version, with Deborah Kerr as his governess.

This extraordinary revival, seen by half a million people on Broadway and 750,000 more on a two-year tour of America, offers a clear, 21st-century line of succession.

The musical is based on a 1944 novel inspired by the memoirs of the real-life Anna, a British widow hired in the 1860s by King Mongkut of Siam to educate his abundance of wives and children. Ultimately it’s the lesson she teaches the autocratic monarch that counts: true love comes in many guises, not all of them obvious or easy.

But what gives a chaste, colonial-era romance an epic sweep are its broader themes: the East-West culture clash, misogyny versus women’s rights, and life’s perpetual conflict between progress and tradition. Clearly, none of those things is out of date today. 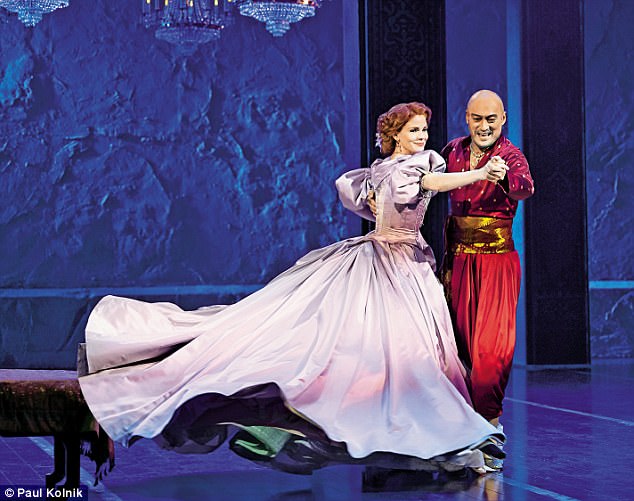 Ken Watanabe and Kelli O’Hara in the new stage version. The musical is based on a 1944 novel inspired by the memoirs of the real-life Anna

The show opens with the ship carrying Anna and her young son Louis to Old Bangkok steaming straight towards the audience, the metaphor theatrically clear: here are two worlds on a major collision course.

Along with pared-down sets and tastefully considered costumes, Bart Sher’s intellectual rigour strips this production of any gaudiness. And in doing so he reveals The King And I to be far more than an exotic Eastern romp accessorised with a lot of gold leaf and a snappy songbook.

Still, it’s the songs you come for in a musical and they are all there: Whistle A Happy Tune, Hello, Young Lovers, Getting to Know You, Something Wonderful and, of course, Shall We Dance? They’ve become standards of musical theatre, but in this version, backed by a 29-piece orchestra, they are delivered with such emotional depth that the industry bible Variety likened the two hours and 50 minutes of the show to an evening at the opera.

It says something about Watanabe’s performance that I expected him to be colossal off stage. He’s not. One of the hottest film stars in Asia and a renowned theatre actor in his native Japan, he’s six feet tall, ultra-slim and pretty tired after a 14-month run. Additionally, when I met him he was in recovery from surgery for stomach cancer. 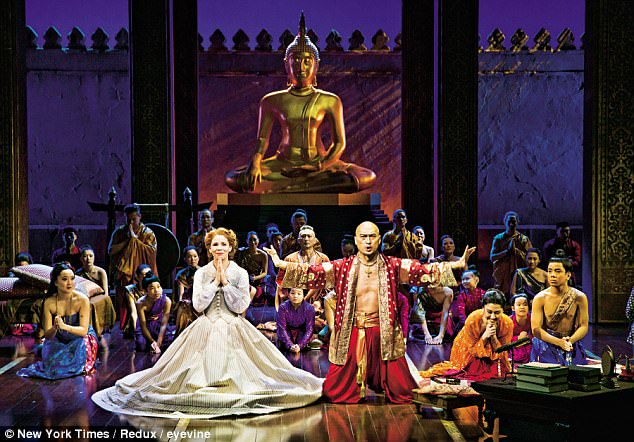 Along with pared-down sets and tastefully considered costumes, Bart Sher’s intellectual rigour strips this production of any gaudiness

It’s 14 years since he broke into Hollywood opposite Tom Cruise in The Last Samurai, and he has blockbusters including Batman Begins and Inception on his CV. But it was his performance 11 years ago as a Japanese general in Letters From Iwo Jima that brought him to Sher’s attention and earned him his Broadway debut.

‘Bart came to see me and asked me to star in The King And I. I did not trust him. I thought, “A musical? You want me dancing… you want me singing… on stage… in New York?” I didn’t believe him. I needed a couple of days to think it over. Then I realised it was OK to try. The worst that could happen is that I would have no success.’

In fact his slightly fractured English has worked for, rather than against his performance, bringing both comedy and pathos to the part. ‘It has been tough in every sense. I had never sung on stage before, I’d never danced on stage, I’d never performed in English on stage, but I trusted myself. I decided to treat it as a play rather than a musical and I tried new things to develop my character, to make him more human.’

Indeed his king is human, bound by duty, tempted by love – one minute the stern statesman, the next a doting father to a troupe of topknotted princes and princesses. He can also be very funny – a trait that is at odds with the sadness at the core of his relationship with Anna and his court.

‘This king is a powerful, heroic man but he’s also lonely,’ says Watanabe. ‘He sees the need for modernisation but for that to happen, for there to be revolution, he has to die.’

The actor, 58, has had his own brush with mortality with stomach cancer, but says it won’t affect his London run. ‘They caught it early, I have made a good recovery. It was not serious for me.’

Indeed, he can’t wait to make his West End debut, believing British audiences will find an extra dimension in his performance because, like his home country, we are a nation with a royal head of state. As for Hollywood royalty, that’s another story. Watanabe is politely dismissive of what is known as ‘The Brynner problem’ with the role. ‘I saw the movie, not the musical. It was interesting but not deep. I don’t think about it. This is a totally different kind of show,’ he says.

That’s due to the mastery of Sher, whose last Rodgers and Hammerstein Broadway revival, South Pacific in 2008, was garlanded in New York and became a 2011 hot ticket in London. He admits he picked Watanabe because he was ‘someone who could help us forget Brynner, to build this show for a new generation of both actors and audiences’.

Sher’s production is helped by having two stars from different worlds who embody on stage the clash at the dramatic heart of the show. Watanabe was born and brought up in Japan and only started learning English as an adult to crack Hollywood. Kelli O’Hara, 41, was raised on a farm in Oklahoma.

Meeing her for a cup of tea, I find a fresh-faced blonde with well-toned arms and a gleaming smile. Her Anna is brave, stubborn and endlessly optimistic. She’s also vulnerable and anxious, a widow responsible for her own future and that of her young son. She’s a proto-feminist buttoned into a corset and bloomers and a 40lb frock. (‘Not necessary but completely authentic,’ reveals O’Hara.)

‘It’s a brilliant role,’ says the star, who won her first Tony for it after five previous nominations. ‘Anna has strength and compassion and a moral soundness. I like that she’s tough and intelligent but that she is more scared than people think.’ 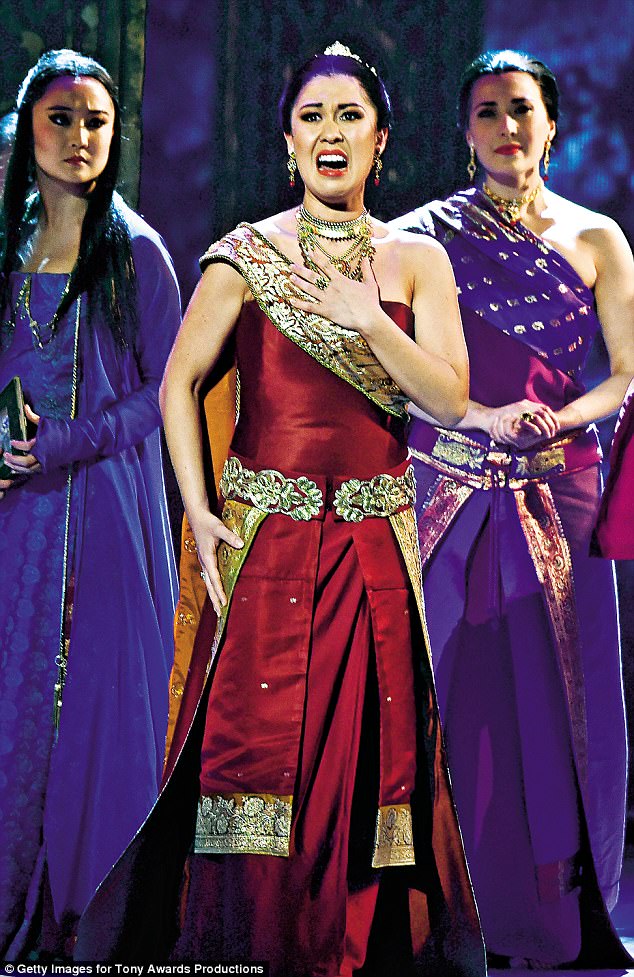 And the huge lilac hooped skirt, which had to be increased in size to create an impact on a stage as large as that of the Lincoln Center? ‘Well, it’s a pain in the ass but I have learnt to embrace it, and at least my legs can move freely underneath there,’ she admits.

She believes her portrayal has benefited from her chemistry with Watanabe and is thrilled to have the chance to reprise it in the UK. ‘For us it’s life imitating art. We were raised differently, we have lived life differently, we think about things differently. I don’t think that’s missed on stage, I hope not.’

Given that her Anna and his king dance the most passionate polka possible without it being a euphemism for something else entirely, I’d say it’s unlikely.

‘The King And I’ will open at the London Palladium on June 21 2018. Tickets from king&imusical.co.uk