Two gun salutes were fired in London within an hour of each other today to mark Prince Charles’s 70th birthday.

The soldiers, horses and guns of the battery had left their forward mounting base in Wellington Barracks at 11am before making their way up Birdcage Walk, past the Queen Victoria Memorial and up Constitution Hill. 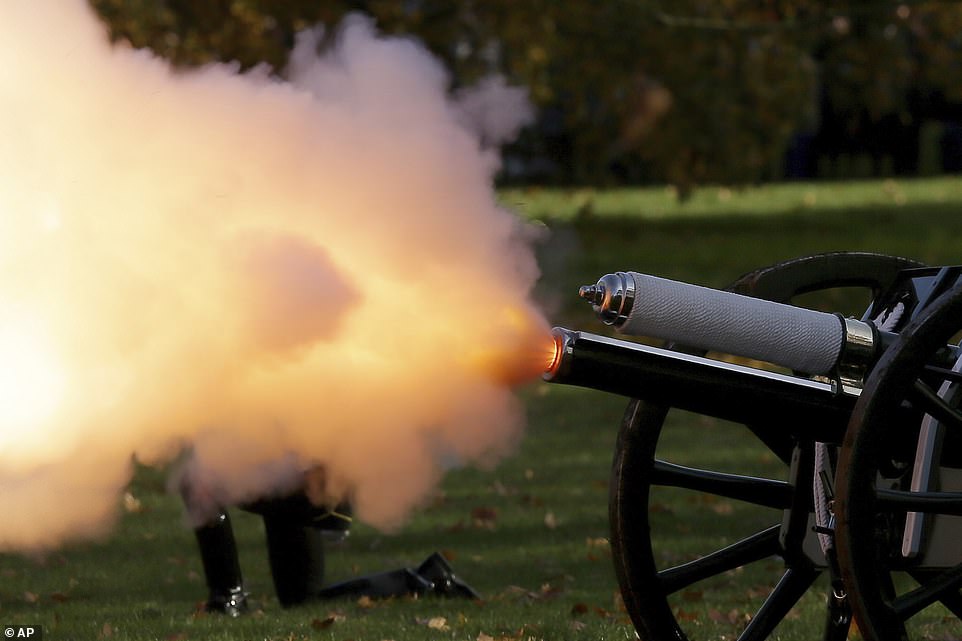 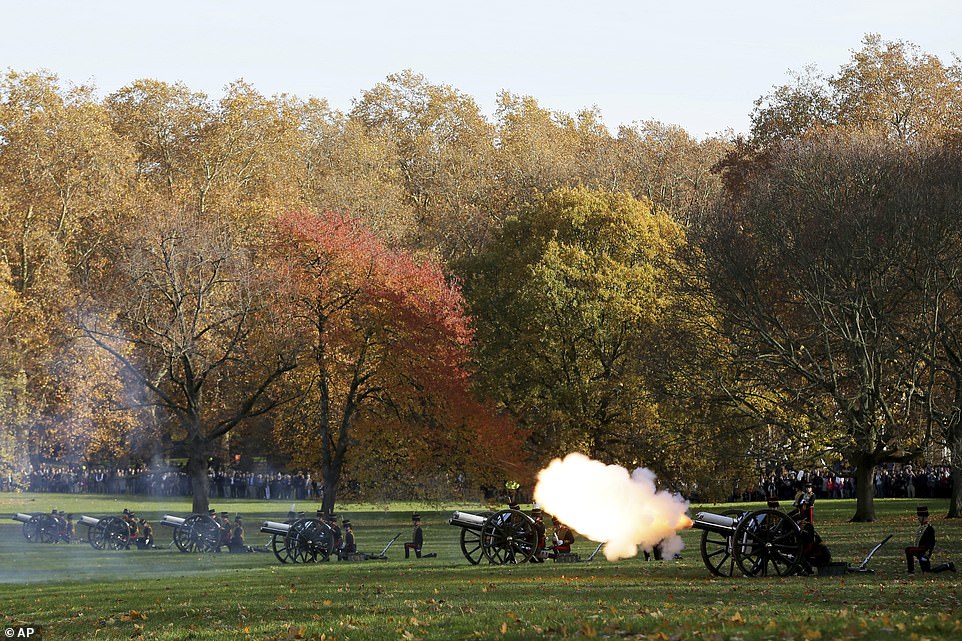 The soldiers, horses and guns of the battery left their forward mounting base in Wellington Barracks at 11am for Green Park 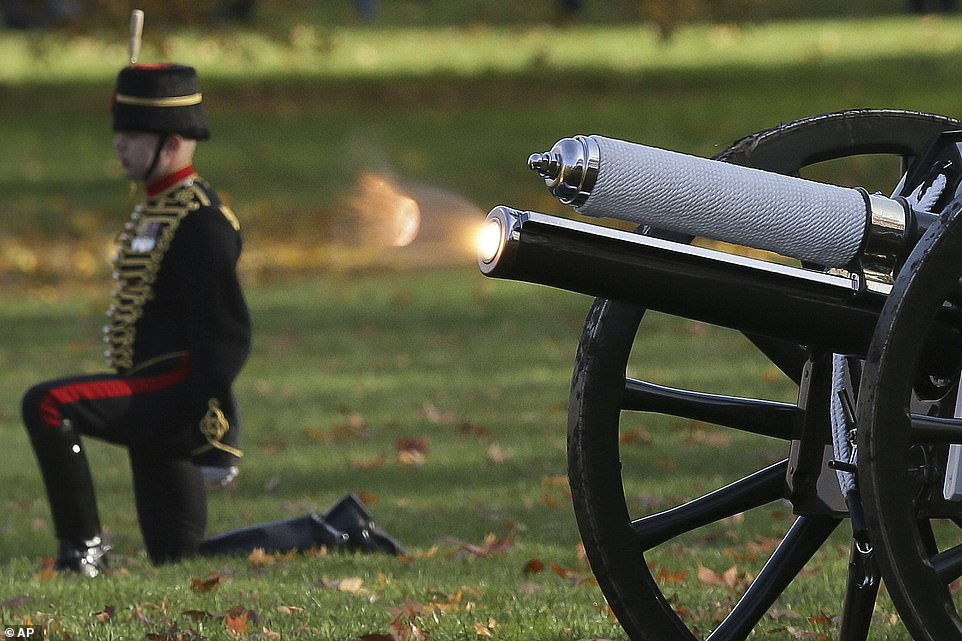 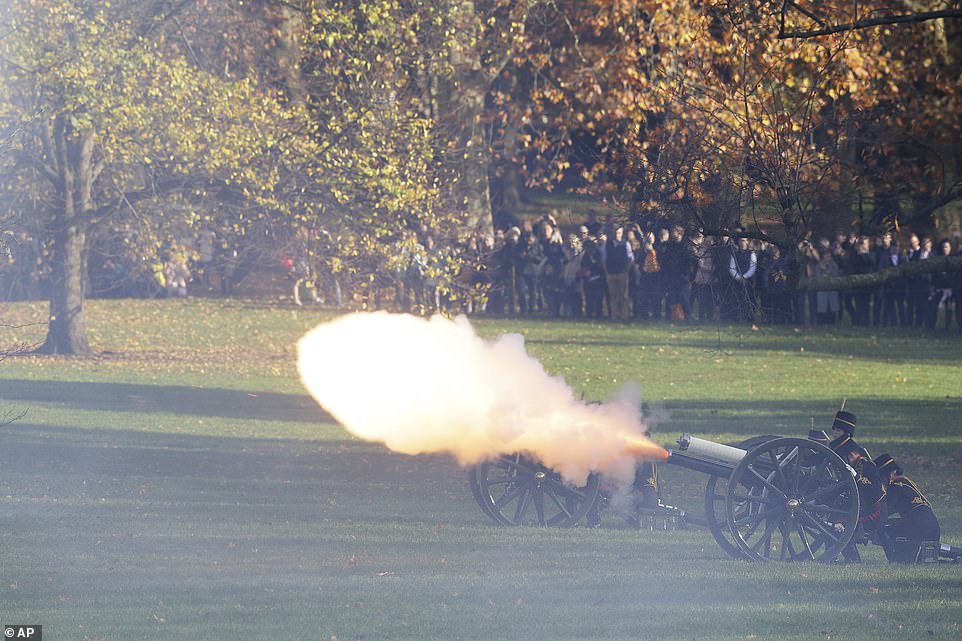 The King’s Troop, at Green Park today, is the ceremonial saluting battery of Her Majesty’s Household Division 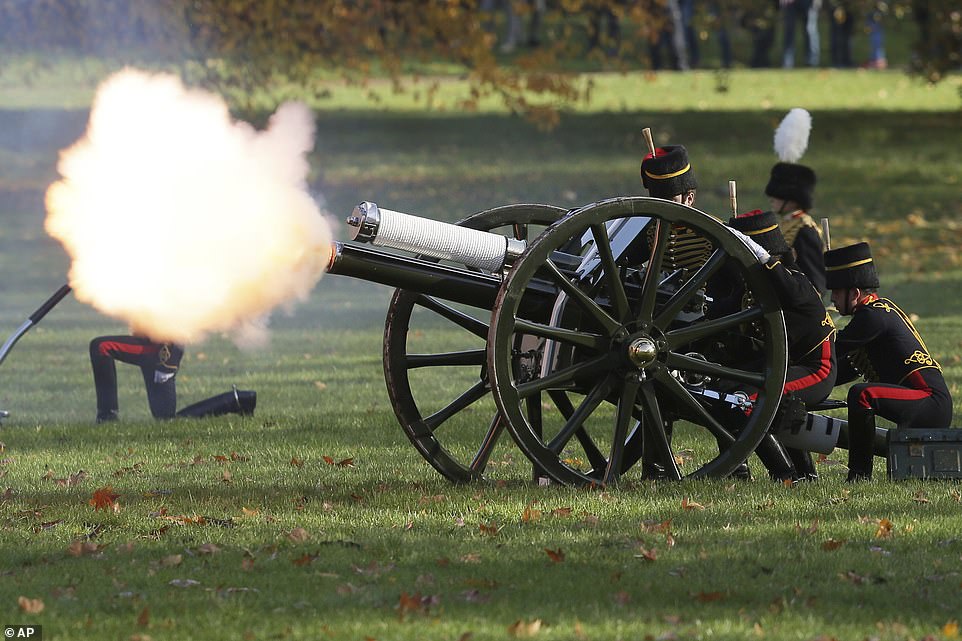 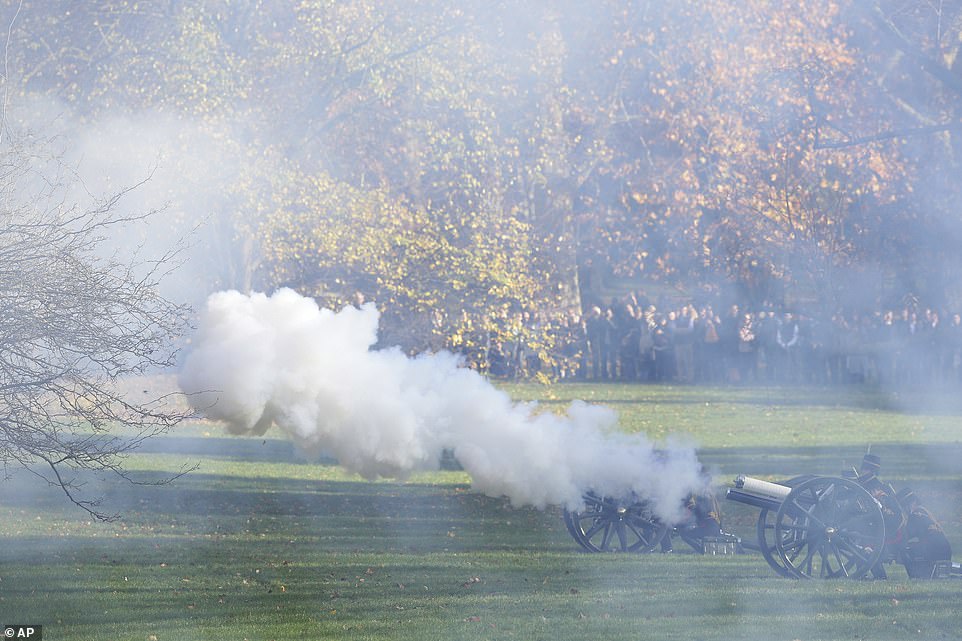 Some 71 horses pulling six First World War-era 13-pounder Field Guns then came into action from the Wellington Arch end of the park to place the guns into position for the Royal Salute in the park.

On the word of command each of the six guns fired blank artillery rounds at ten-second intervals until 41 shots were fired. The horses and riders then collected the guns and took them back to Wellington Barracks.

Just after midday, the Honourable Artillery Company, the City of London’s Reserve Army Regiment, in ceremonial attire, left their barracks at Armoury House to drive through the City in their liveried Pinzgauer vehicles. 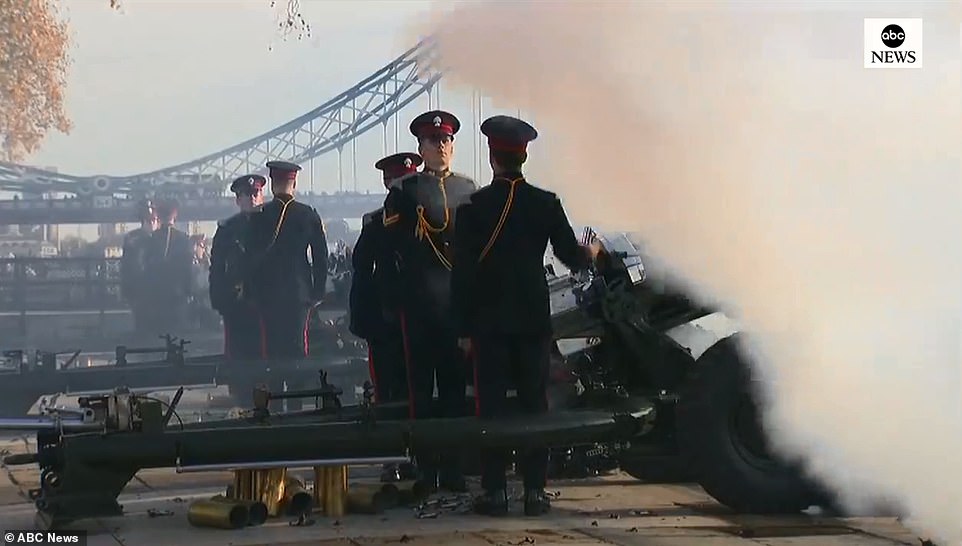 The Honourable Artillery Company, the City of London’s Reserve Army Regiment, fire a 62-gun salute at the Tower of London 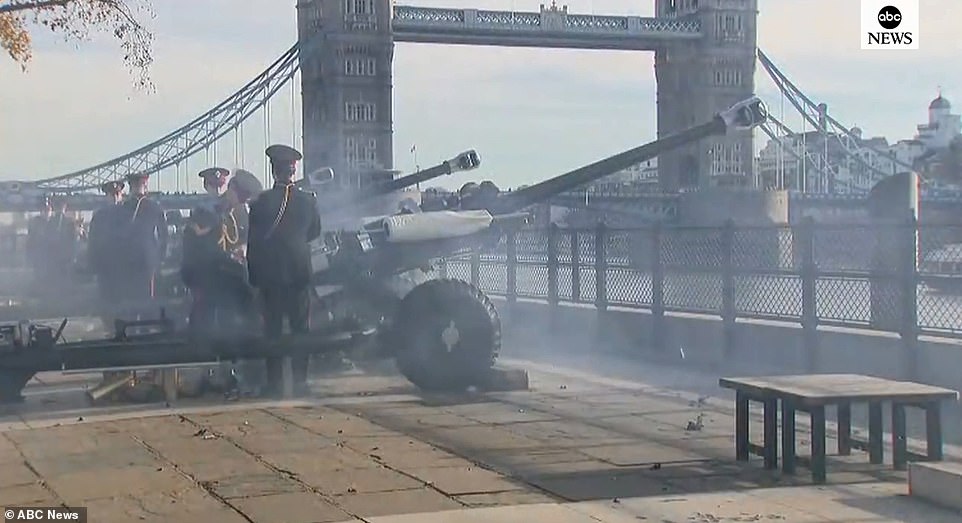 The Honourable Artillery Company had an escort to the Tower to perform the capital’s second gun salute of the day, at 1pm 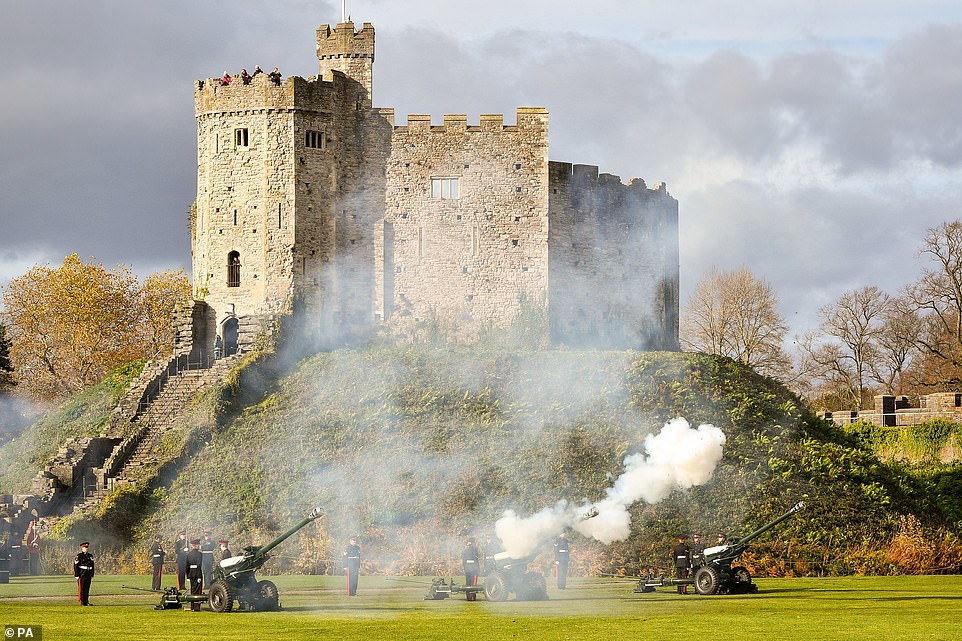 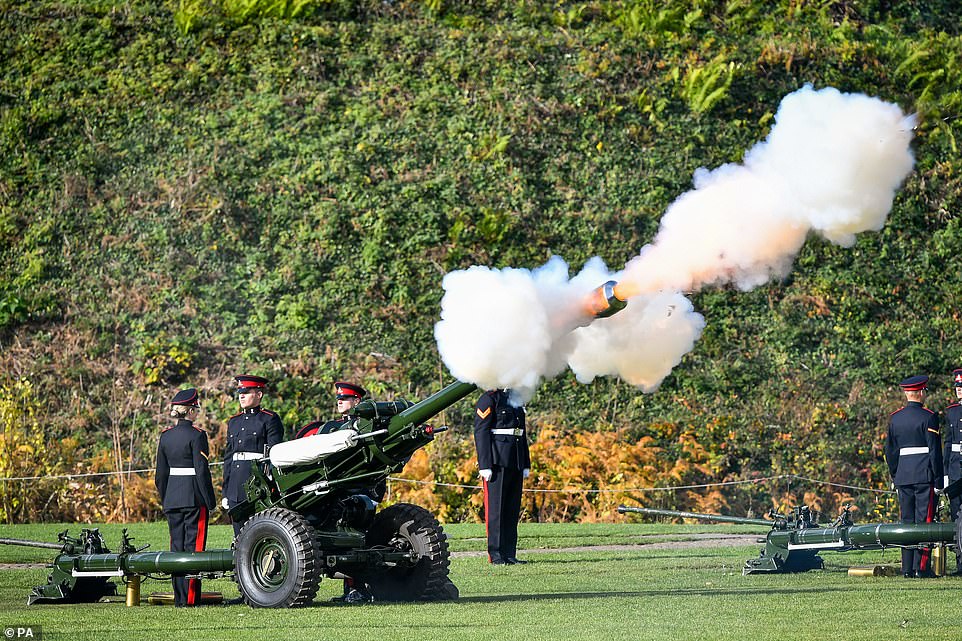 The 21-gun salute at Cardiff Castle, held by Army Reservists to mark the Prince of Wales’s 70th birthday today 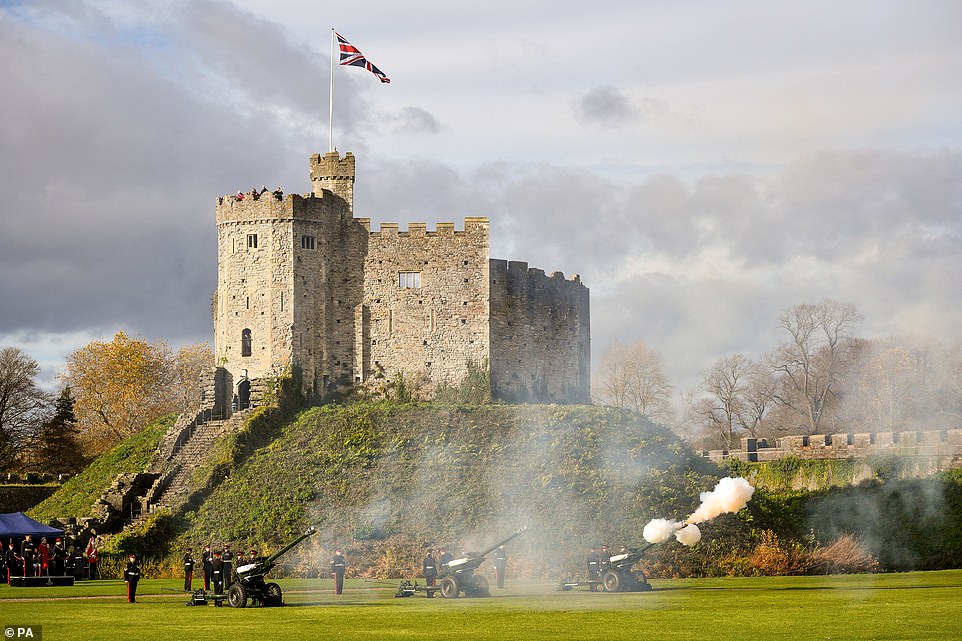 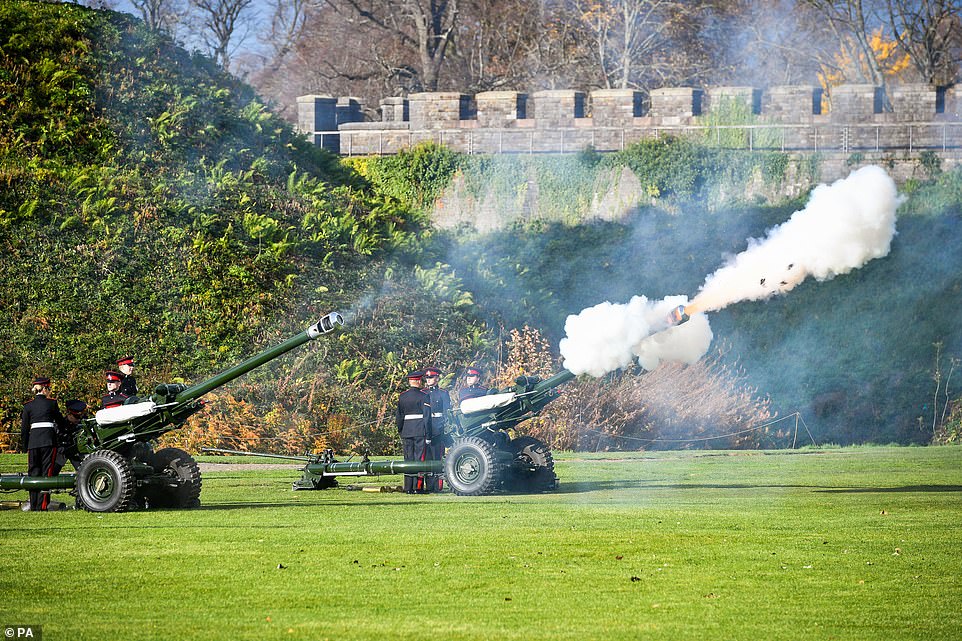 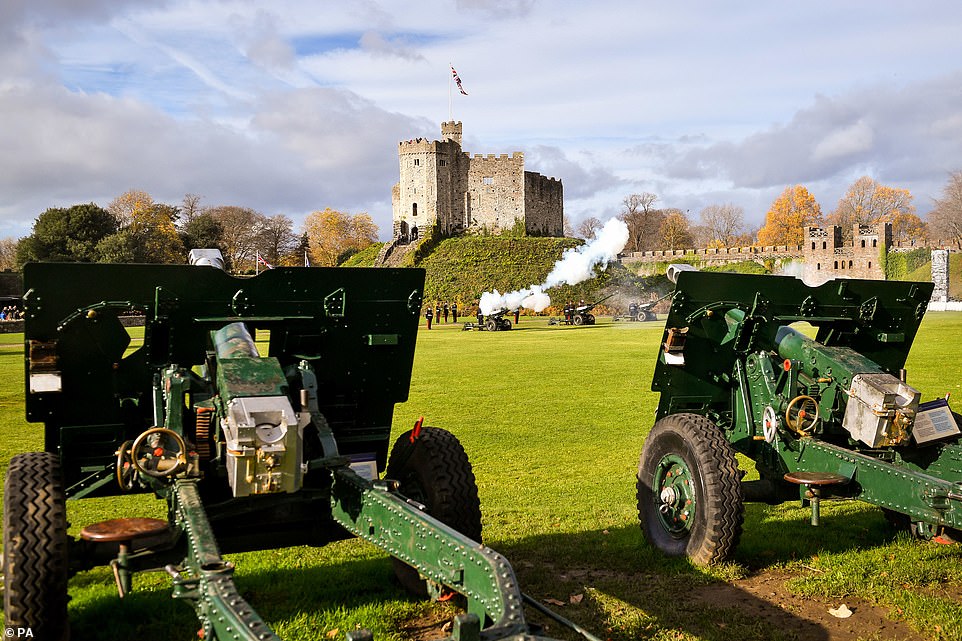 They had an escort to the Tower of London to fire a 62-gun Royal Salute at 1pm – the second salute of the day.  When the Guns arrived at the Tower, they were placed into position, on the riverbank, overlooking HMS Belfast.

The three L118 Ceremonial Light Guns, similar to those used operationally in recent years in Afghanistan, were used to fire the 62 gun salute across the Thames at ten second intervals.

A Royal Salute normally comprises 21 guns, but this is increased to 41 if fired from a Royal Park or Residence. At the Tower of London, which is a Royal Residence, a total of 62 rounds are fired on Royal anniversaries.

This also includes an additional 21 guns for the citizens of the City of London to show their loyalty to the Monarch. 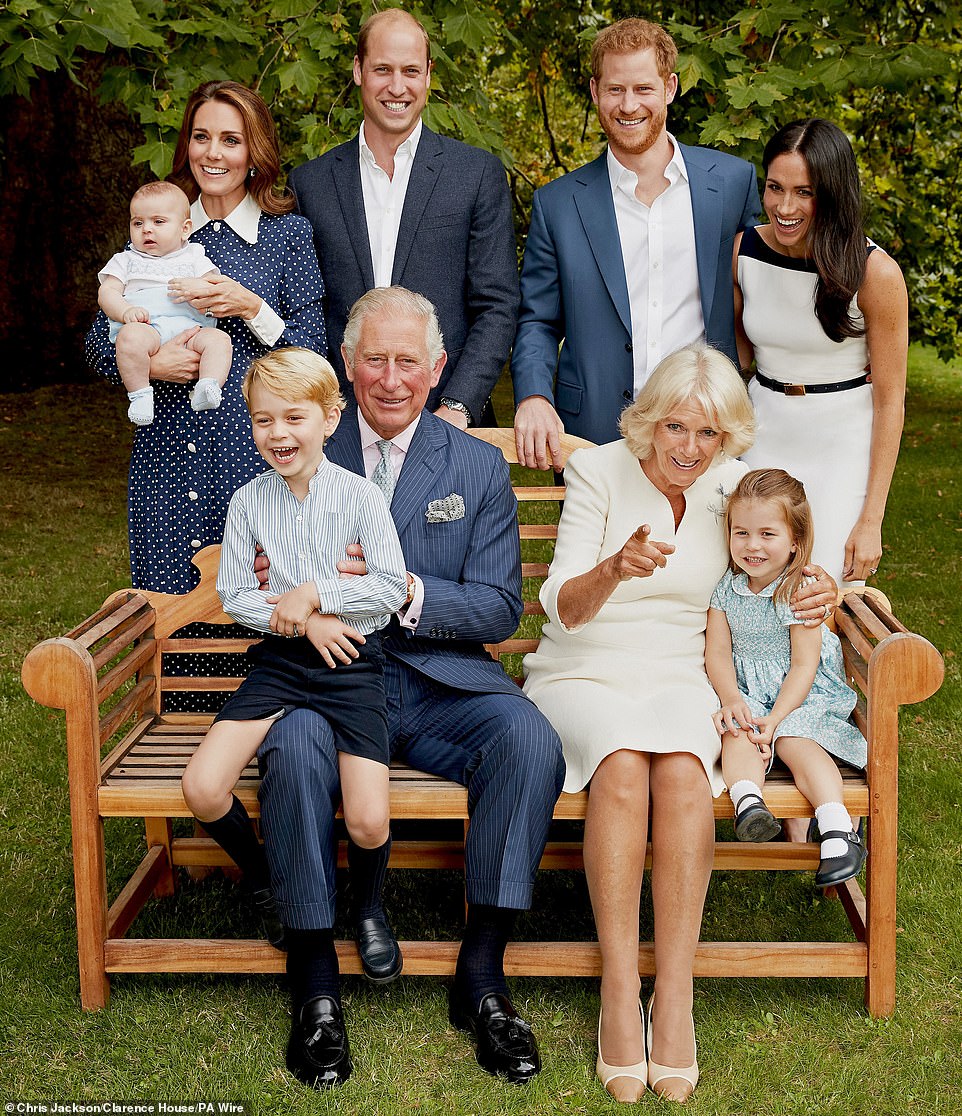 Prince Charles was surrounded by his nearest and dearest in this official image marking his milestone birthday. Pictured: (back row, from left) Louis, Kate, William, Harry, Meghan (front row, from left), George, Charles, Camilla and Charlotte 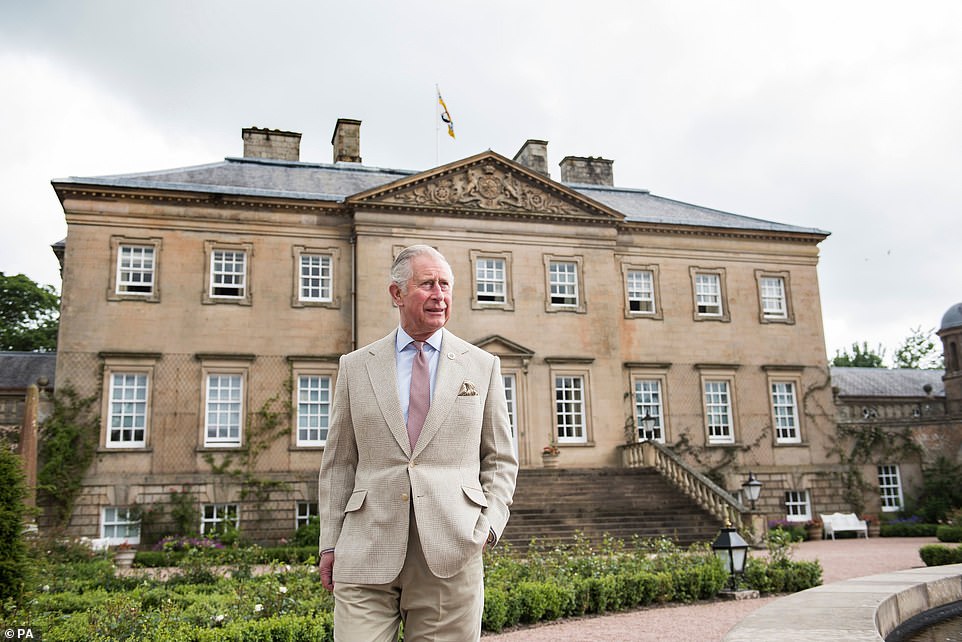 Prince Charles, pictured at Dumfries House in Scotland, is beginning his eighth decade from a position of confidence

The 21st Prince of Wales: Charles by numbers

Here’s a look at the Prince of Wales in numbers ahead of his 70th birthday:

3 – Age when he became heir to the throne.

3 – Grandchildren – Prince George, Princess Charlotte and Prince Louis – becoming 4 after the Duke and Duchess of Sussex’s baby is born next spring.

5 – Step-grandchildren – the Duchess of Cornwall has five grandchildren: Lola and Freddie Parker Bowles and twins Gus and Louis Lopes, and their sister Eliza.

9 – Age when he was given the title the Prince of Wales by the Queen.

11 – Years married to the Princess of Wales before they separated.

15 – Years married to Diana, Princess of Wales, before they divorced.

20 – Age at his investiture as the Prince of Wales at Caernarfon Castle in 1969.

More than 420 – Charities of which the prince is patron or president.

875,000 – Disadvantaged young people helped into employment or business by his youth charity, the Prince’s Trust.

£140million – Money raised by his charities each year.

£21.7million – Charles’s annual income from his hereditary estate, the Duchy of Cornwall.

£45.7million – Taxpayer funds received by the monarchy to pay for official duties and other expenditure in 2017-18.

Congratulations from around the world have been sent to the Prince of Wales as he celebrates his 70th birthday.

The Welsh Guards at home and abroad recorded special video messages for their Colonel from troops in Iraq, Afghanistan, Germany, Chile and Canada, as well as in the UK.

The Royal Family also wished the nation’s longest serving heir to throne ‘a very Happy 70th Birthday’ via Twitter, accompanied by a montage of photos of the prince through the years.

Charles is spending his birthday working, holding meetings before he and the Duchess of Cornwall have tea with a group of inspirational people who also celebrate their 70th birthday this year.

In the evening, the Queen will throw a Buckingham Palace birthday bash for her eldest son and heir.

European royals and Charles’s closest friends and family are expected to gather at the glittering black-tie party in the monarch’s London residence.

Charles was surrounded by his nearest and dearest in the official images marking his milestone birthday.

In two photos released by Clarence House, the prince was pictured sat on a bench with his grandson Prince George, wife Camilla and granddaughter Princess Charlotte.

The photographs are rare images of the prince with his three grandchildren, which will increase to four when Meghan gives birth next year.

Charles is beginning his eighth decade from a position of confidence, with his charitable work in full swing, his sons forging their own public lives and Camilla by his side providing support.

The photo shoot was staged in the garden of Clarence House in September, and appears to show a ‘before and after’ of the moment the photographer said ‘smile for the camera’.

In one image, the royals are looking straight ahead and smiling, while in the second Meghan is bending over as she laughs, Camilla has put her arm on three-year-old Charlotte’s shoulder and is pointing at something, while George has a fit of the giggles.

Baby Louis, who is six months old, looks happy and content in the photos and has almost grown a full head of hair, while his big brother, five-year-old George, dangles his long legs either side of his grandfather’s knee.

The pictures were taken by Getty photographer Chris Jackson.