The Kodak Smile Printer will let you print from your smartphone

I vividly remember the sense of childlike wonder I had when I saw my first Polaroid camera, followed rapidly by the rush of pure disappointment when my dad explained that no, I wasn’t getting one.

Now my children look at instant-print cameras and say things like: ‘Why are you making cards?’

To be fair, I then explained that the prints that come out of the Kodak Smile printer are actually stickers, and their beady eyes suddenly lit up at the thought of being able to ruin yet more walls in our house.

The Kodak Smile (it’s got very little to do with the original Kodak, of course, with the name being licensed out after Kodak’s bankruptcy in 2012) pairs with a smartphone via Bluetooth. It prints out images smaller than a playing card, using Zink (zero ink) photo paper (so, unlike the printer in your house, it won’t demand a fresh supply of alarmingly expensive ink at the worst possible moment). A pack of paper for 50 prints is £25, and the battery will last for about 40 prints (it charges up via USB).

Obviously, the results look significantly worse than they do on the gorgeous Full HD screen of a smartphone, but they’re actually not bad, and the app’s not as rickety as I was expecting. Pairing and unpairing your phone is quick and simple. 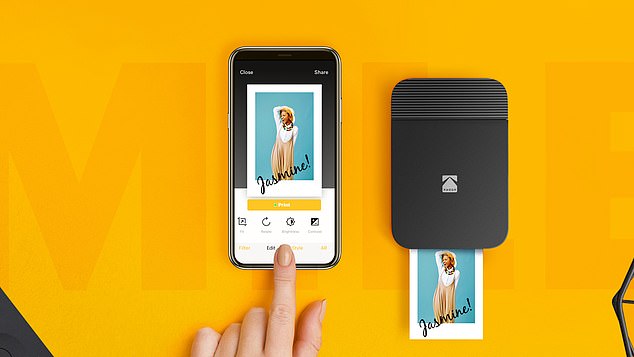 The results look significantly worse than they do on the gorgeous Full HD screen of a smartphone, but they’re actually not bad, and the app’s not as rickety as I was expecting

The problem is the fun factor. Polaroid cameras always made you the centre of attention, and the whole ritual of snapping the image, then the print popping out was practically a party by itself.

Somehow, the impact isn’t quite the same when you say: ‘Hey I brought my printer!’