The Northeast storm has claimed a second life on New York’s Long Island.

Also on Wednesday, a 51-year-old woman died when a van overturned in a weather-related crash in the area.

Two other people have been pronounced dead this week during the storm, including another traffic death on Interstate 78 in Hunterdon County, New Jersey.

A woman suffering dementia and Alzheimer’s was found dead in the snow about a mile from her home in Toms River.

A man shovels the street near the entrance to a firefighter station during a snowstorm, Wednesday, March 21, 2018, in Jersey City, N.J. 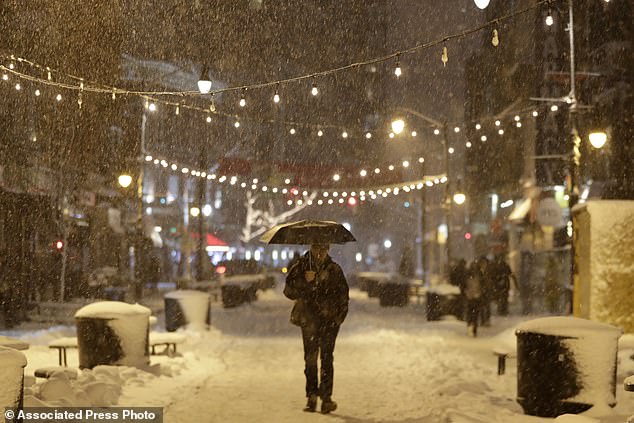 A woman and a child cross a snow-covered street during a snowstorm Wednesday. A spring nor’easter targeted the Northeast with strong winds and a foot or more of snow expected in some parts of the region 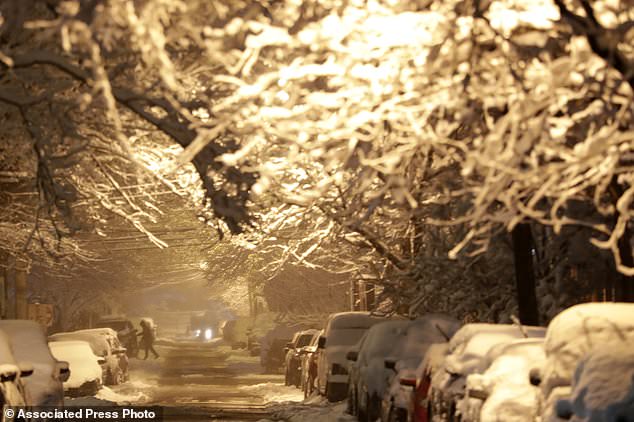 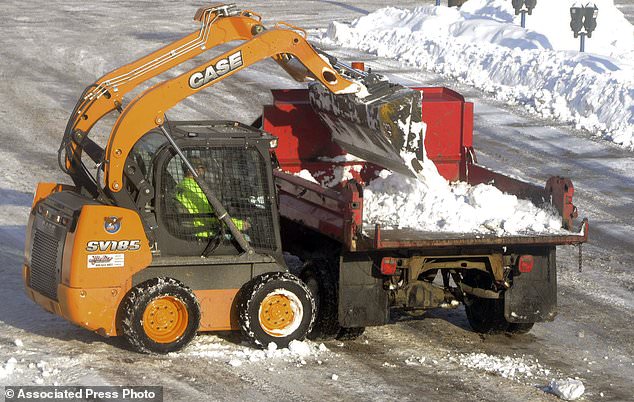 A worker with the Hazleton Department of Public Works uses a loader to dump snow into a waiting truck during snow removal in Hazleton, Pa. on Thursday

The latest storm lost some punch as it rolled into New England on Thursday.

Amtrak says it will restore Northeast Corridor service on Friday after operating on a modified schedule for two days due to the fourth nor’easter in three weeks.

The storm dumped more than a foot of snow in some places and knocked out power to tens of thousands of customers.

Parts of eastern Long Island are digging out from a foot-and-a-half of snow from the fourth nor’easter in three weeks.

The National Weather Service has reports of over 19 inches in Bay Shore and Patchogue (PACH’-awg). 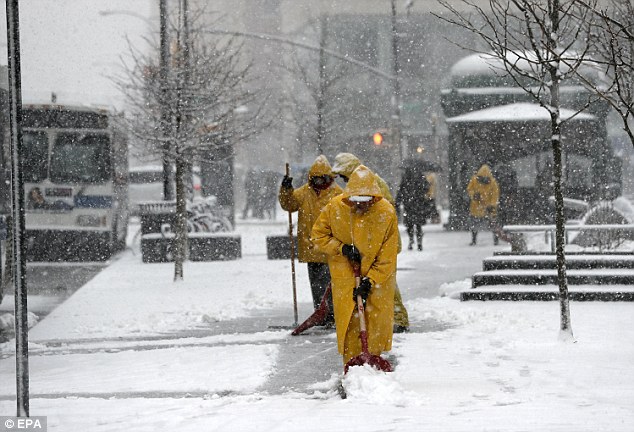 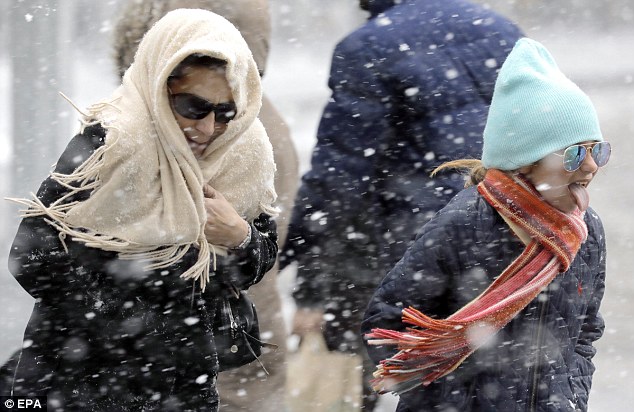 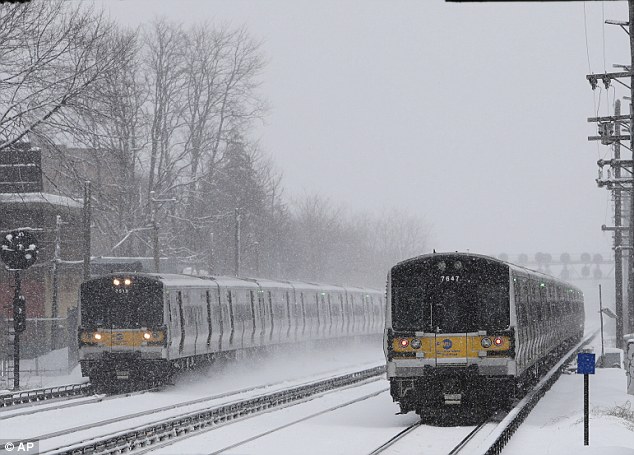 Long Island Rail Road trains pass each other during a spring nor’easter Wednesday, March 21, 2018, in the Queens borough of New York

The Long Island Rail Road says its personnel worked through the night to clear rails of snow and ice, but riders still need to allow extra time on Thursday.

In New York City, the weather service says there’s over 13 inches in Little Neck, Queens; 10 inches in Manhattan’s Grammercy Park; and about 8 inches in Central Park.

In Westchester County, over 10 inches has been reported in White Plains.

Metro-North railroad has resumed regular weekday service, though it’s had some weather-related delays.

The area’s airports have been lumbering back into service.

Early Thursday, Pennsylvanians were digging out after the fourth major storm to hit the state in three weeks dumped more than a foot of snow in some areas.

Some schools had canceled classes for Thursday due to treacherous travel conditions in some areas, but many districts planned to reopen or hold delayed openings.

The state’s major utilities reported that slightly more than 1,200 customers were without service early Thursday.

The storm dropped about 8 to 12 inches of snow overall in central areas, while some eastern areas saw up to 16 inches.

Most major roadways in the state were clear, but residents were being urged to drive cautiously and allow extra travel time. 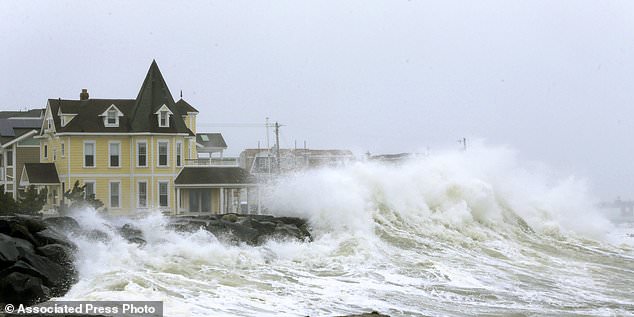 Heavy ocean surf crashes over the seawall between 7th and 8th Streets in Avalon, N.J., Wednesday 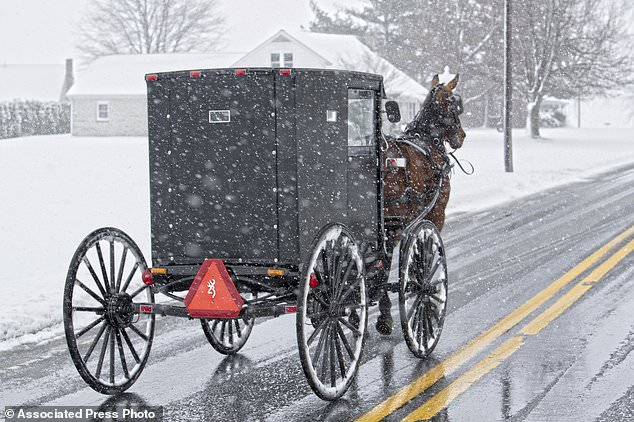 An Amish buggy rides along a snowy Main Street in East Earl, Pa. Wednesday, March 21, 2018 during a snow storm on the second day of Spring 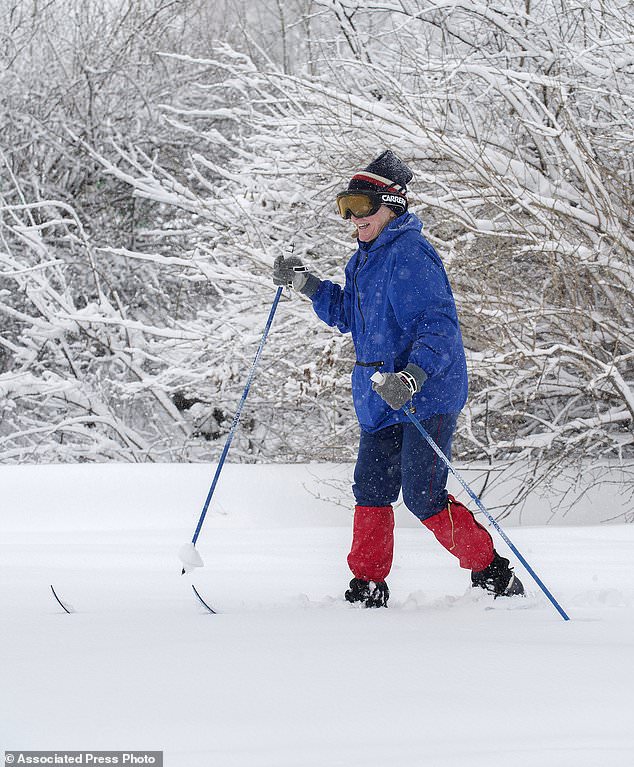 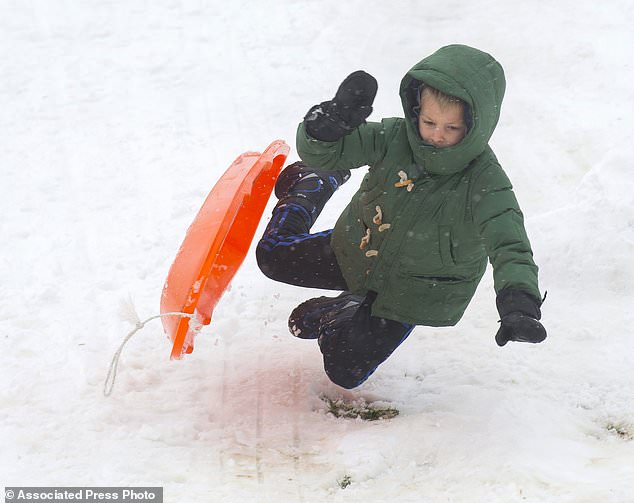 Reid Claney, 6, flies off his sled after trying a snow jump at a popular sledding spot in Frederick, Md., Wednesday, March 21, 2018. The fourth nor’easter in three weeks has dumped more than a foot of snow in some places

At 7:15am, Thousands of utility customers remained without power in New Jersey following the fourth major storm to hit the state in three weeks.

The storm dropped around a foot of snow in some parts before leaving the region early Thursday, with central Jersey seeing the highest amounts.

State offices were closed Wednesday due to the storm, but Democratic Gov. Phil Murphy said they would reopen Thursday.

Murphy had also declared a state of emergency Tuesday night ahead of the storm. But his office hasn’t announced yet if that order has been lifted.

Dozens of schools had cancelled classes for Thursday due to treacherous travel conditions in many areas, while others planned delayed openings.

The fourth major storm in three weeks dumped more than a foot of snow in parts of Pennsylvania Wednesday, while major cities along the Interstate 95 corridor saw much less.

Downtown Philadelphia got 7 inches and New York City’s Central Park recorded a little less than 7. Boston was expected to get 4 to 9 inches before tapering off Thursday afternoon.

Airlines canceled more than 4,000 flights Wednesday. On the ground, Amtrak scaled back service on the Northeast corridor between Washington and Boston, and some states banned trucks from major highways. 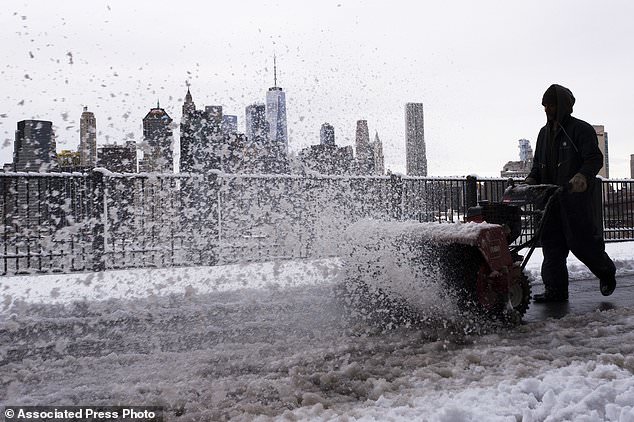 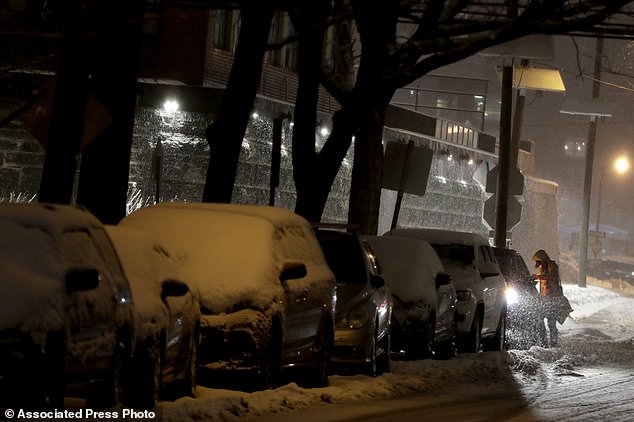 A woman loads a child onto a vehicle while other cars are covered by snow during a snowstorm, Wednesday, March 21, 2018, in Jersey City, N.J.