Dozens of protesters are rallying outside the U.S. Embassy in London in solidarity with the “March for Our Lives” protest against gun violence.

J.J. Miller, 17, of Baltimore, Md., blows bubbles as crowds arrive for the “March for Our Lives” rally in support of gun control, Saturday, March 24, 2018, in Washington. (AP Photo/Alex Brandon)

Students, families with children and other protesters raised placards reading “Protect kids not guns,” ”Never again,” and “Enough is enough” Saturday outside the new embassy building in south London.

Amnesty International U.K.’s director Kate Allen referred to the 1996 school killings at Dunblane Primary School in Scotland, in which 16 students and a teacher were killed.

She said: “After our own school shooting at Dunblane, new gun ownership laws were introduced in Britain and that’s exactly what’s needed in the United States, where gun deaths are a national tragedy.”

Hundreds of marches are planned in U.S. cities and dozens of locations abroad.

With thousands of demonstrators gathering in Washington, organizers of the March for Our Lives rally say the country has reached a historic emotional tipping point on gun violence.

They predict a half-million demonstrators Saturday near the U.S. Capitol building for a several-hour rally. That would match last year’s women’s march and make it one of the largest Washington protests since the Vietnam War era.

A poll conducted by The Associated Press-NORC Center for Public Affairs Research shows that 69 percent of respondents and half of Republicans now favor stronger gun control laws.

Activists are looking to channel the energy of this youth-led initiative into the midterm congressional elections this fall with elements like on-site voter registration booths. 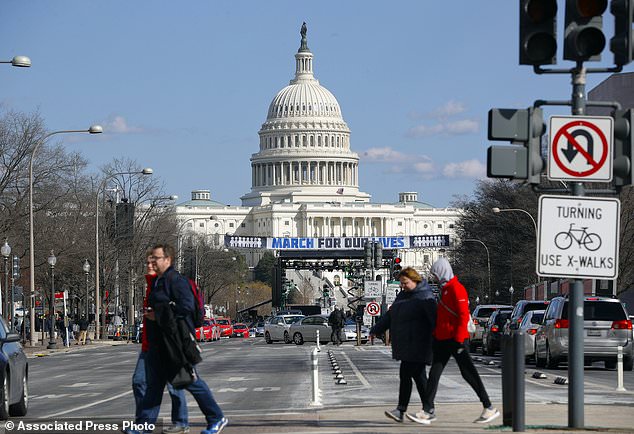 The stage area is set up on Pennsylvania Avenue near the U.S. Capitol in Washington, Friday, March 23, 2018, before the “March for Our Lives” rally in support of gun control. (AP Photo/Pablo Martinez Monsivais)