Don’t make the mistake of believing the world of cruise is adrift from modern life.

It features vast observation decks and a high-tech Amundsen Science Centre with touch screens, science equipment, a library and workshops.

From £1,889pp for a nine-day Highlights Of The Pacific voyage, departing May 10, 2020. For more information visit hurtigruten.co.uk. 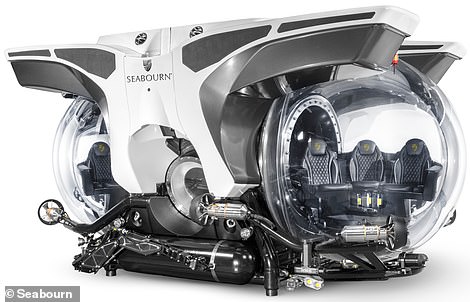 The new Seabourn Venture will have submarines that drop to 1,000ft to explore shipwrecks

New 132-suite, ultra-luxury expedition ship Seabourn Venture, set to launch in 2021, will go to more than 150 destinations from Antarctica to the Amazon, with a 26-person expedition team of wilderness experts, scientists, historians and naturalists.

It will also have submarines that drop 1,000ft to explore sunken shipwrecks, reefs and marine life.

From £7,000pp for a ten-day Highlights Of The English Channel cruise, departing July 5, 2021. For more information visit seabourn.com. 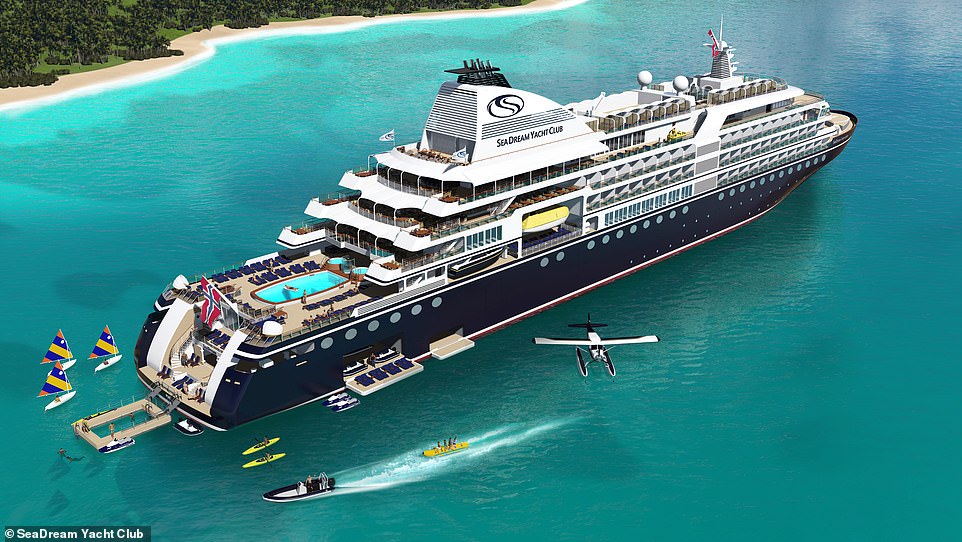 SeaDream Yacht Club is introducing ‘Global Yachting’ – floating away from traditional cruising with a small ship to give an intimate and personalised experience, with 110 ocean-view suites and a 1:1 guest-to-crew ratio. 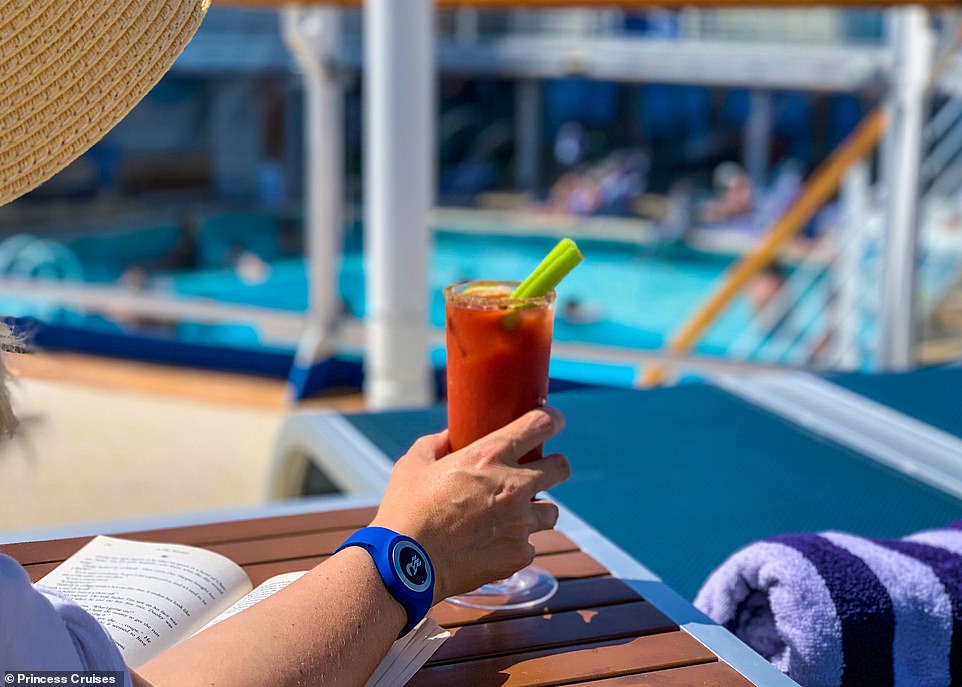 Princess Cruises has introduced The Medallion, which is worn on the wrist and allows passengers to unlock their cabins and order drinks

Shaped like a ten-pence coin, The Medallion is 21st Century Princess Cruises technology worn on a wristband, using 4,000 ship sensors to unlock your cabin door for you, track the kids and deliver cocktails to you anywhere on board.

Simply use the OceanNow app and The Medallion will instruct the crew on where to find you. 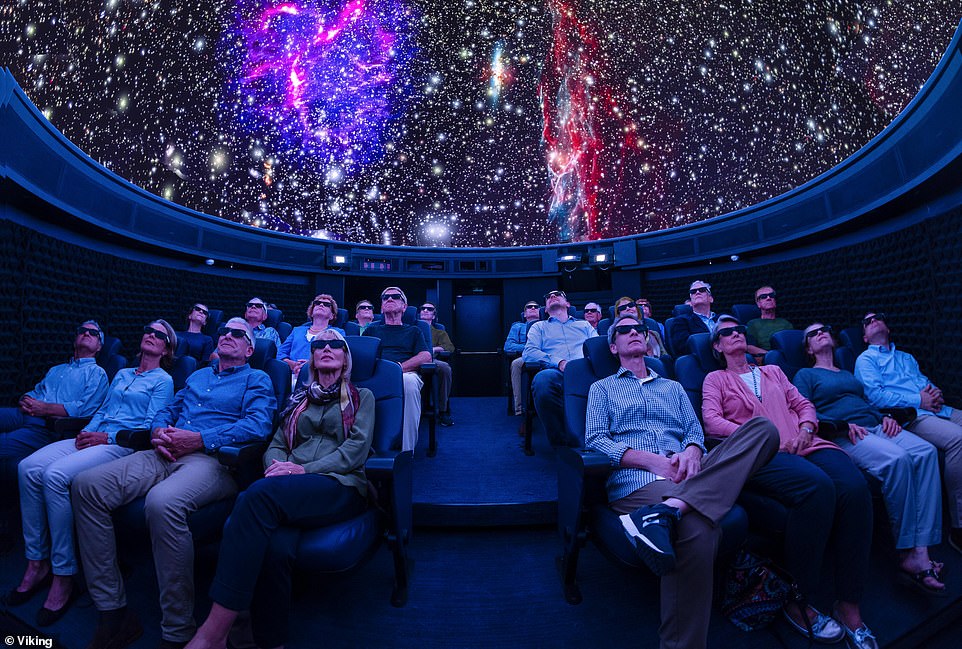 The Explorers’ Dome on board Viking Jupiter. It is a 26-seat planetarium and talks are led by a resident astronomer

Viking Jupiter has a 26-seat planetarium, the Explorers’ Dome and talks led by a resident astronomer.

Delve into the stars, planets and astronomical wonders surrounded by antique globes, model star constellations and a golden telescope.

From £1,990pp for an eight-day Journey To Antiquities cruise, departing December 13, 2019. For more information visit vikingcruises.co.uk. 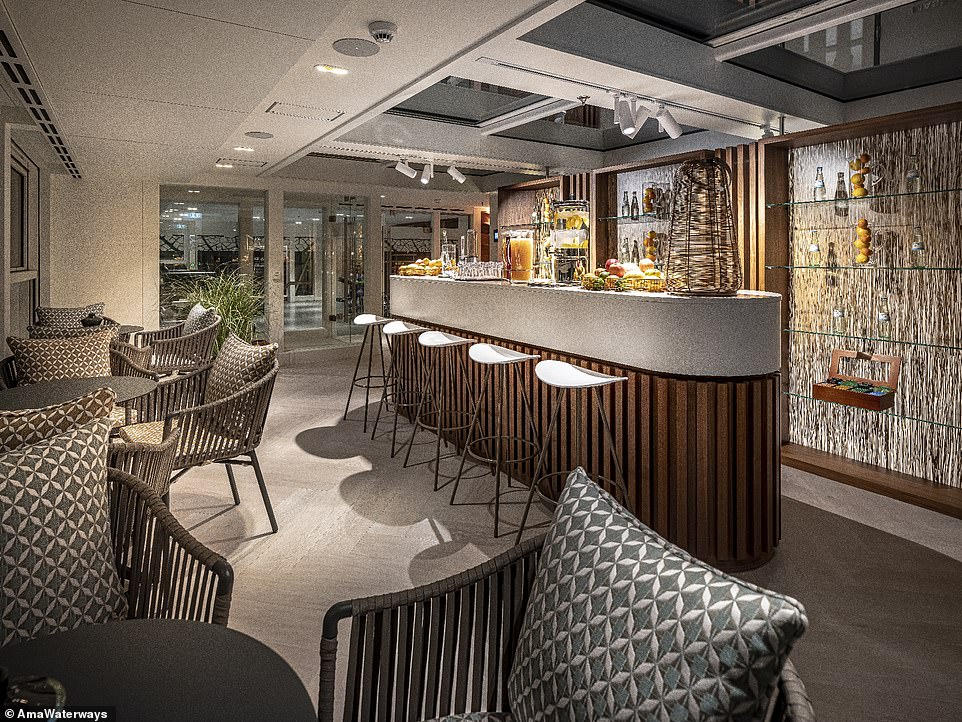 The Zen Wellness Studio on board the 440ft long AmaMagna. There are 53 suites and the world’s first watersports platform on a river ship

At 440ft long, AmaMagna is bringing a wave of first-at-river innovations – with a pop-up sky bar and a Zen Wellness Studio hosting group classes on stretching, cardio and circuit training.

There are 53 suites and the world’s first watersports platform on a river ship – and it has a sundowner boat for sunset cruises.

From £2,951pp for an eight-day Christmas Markets On The Danube cruise, departing December 8, 2019. For more information visit amawaterways.co.uk. 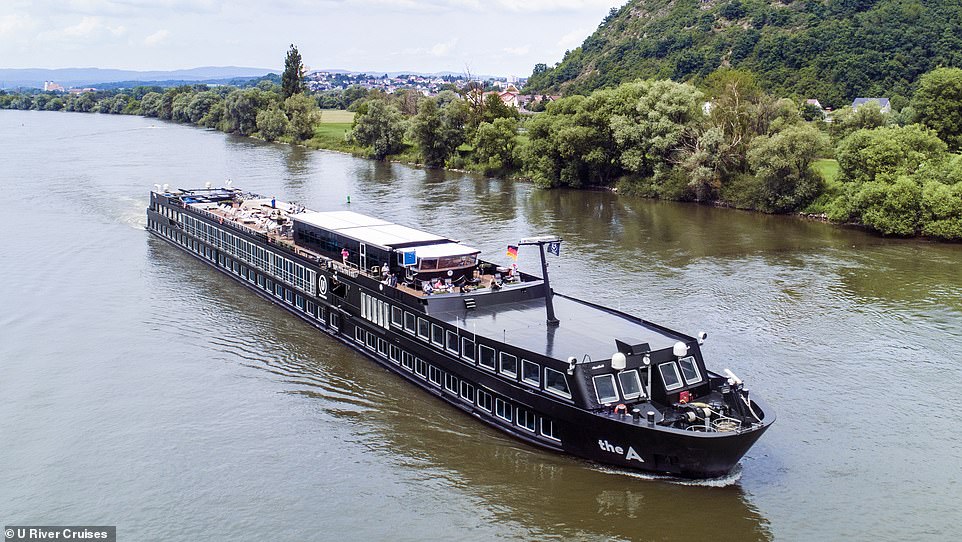 U River Cruises’ The A Ship, which has hosted a RuPaul’s Drag Race themed cruise. An eight-day cruise around Germany starts from £1,199

U River Cruises, for the under-45s, has teamed up with drag queens from the hit TV show RuPaul’s Drag Race – Jiggly Caliente, Darienne Lake and Phi Phi O’Hara – to offer a week of shows, make-up lessons and karaoke, sailing from Frankfurt to Regensburg, with stops at Nuremberg and Miltenberg Castle.

From £1,199 for an eight-day Germany’s Finest cruise. For more information visit ubyuniworld.com. 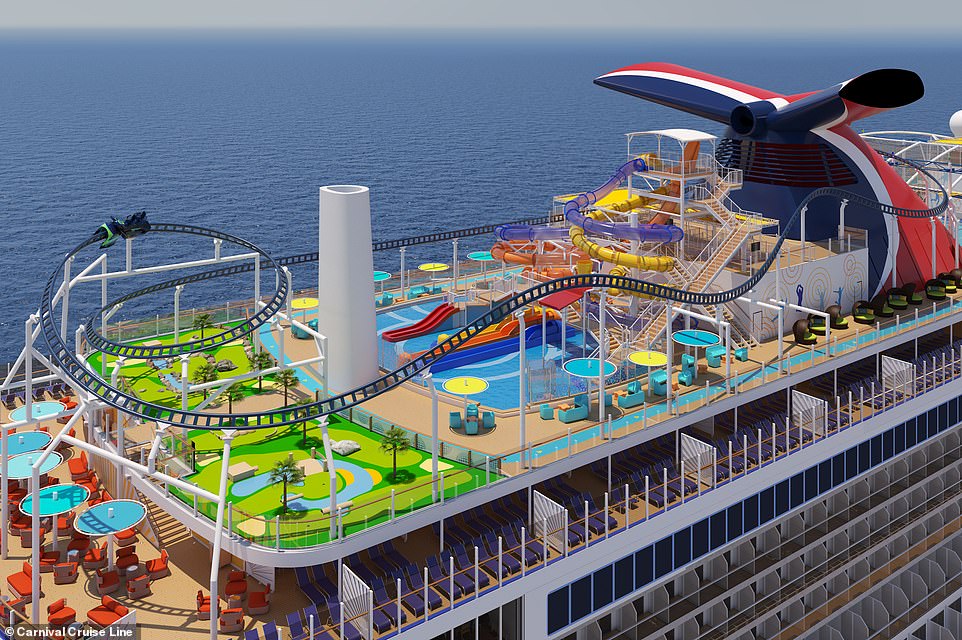 Racing in a motorbike along a track 187ft above sea level, you’ll come close to 40 miles per hour, with 360-degree views and a high-powered turn around Carnival’s iconic funnel.

Getting around the Galapagos 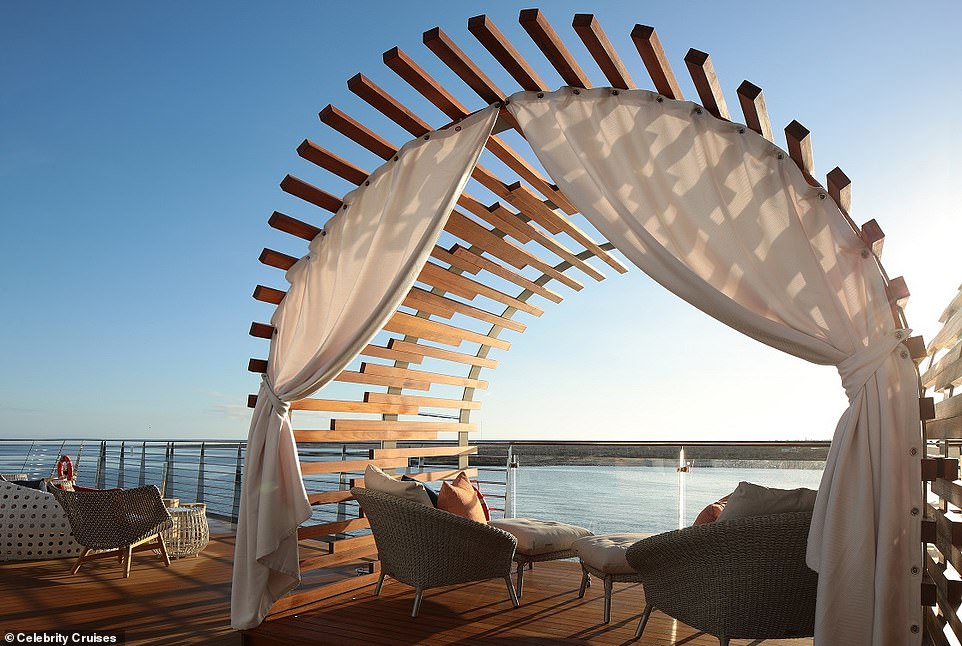 The private cabanas on board Celebrity Flora, Celebrity Cruises first expedition yacht, which will sail to the Galapagos Islands

Celebrity Cruises has launched the first expedition yacht to sail the Galapagos Islands, Celebrity Flora, which carries 100 in all-suite accommodation, has private cabanas for mojito-sipping and the first-ever glamping experience at sea with an open-air stargazing platform. 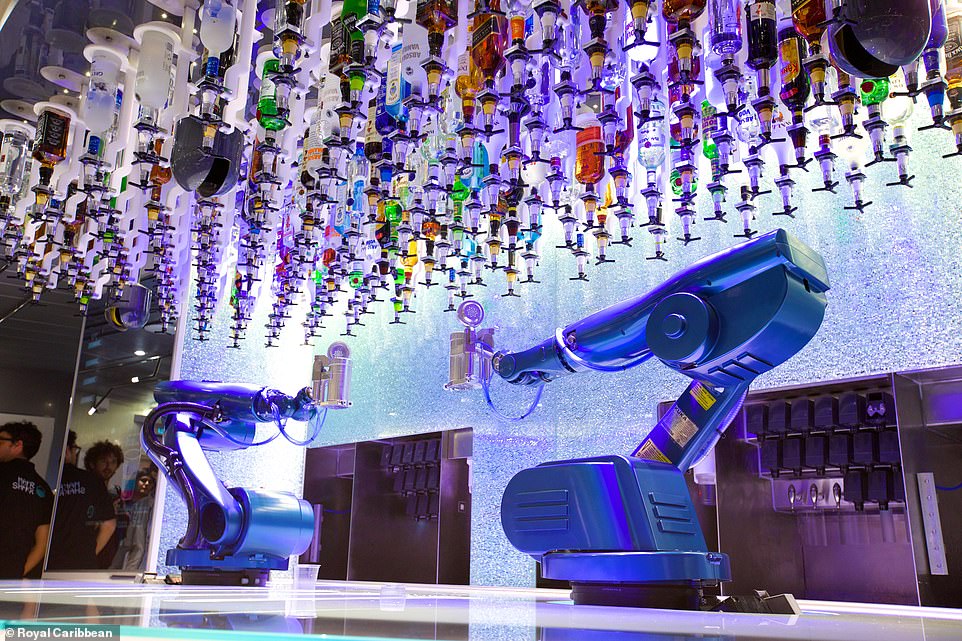 The Bionic Bar on board Royal Caribbean’s Symphony of the Seas. A similar bar will be unveiled on the renovated Allure of the Seas next year

Sailing from Barcelona in May 2020, Royal Caribbean’s Allure Of The Seas will have a ten-storey slide, The Ultimate Abyss, to plunge down to Aqua Theatre on Deck 6 in time for an acrobatic dive show, followed by a tipple at the Bionic Bar, served by two robot bartenders.

From £991pp for an eight-day Western Mediterranean cruise, departing May 10, 2020. For more information visit royalcaribbean.com. 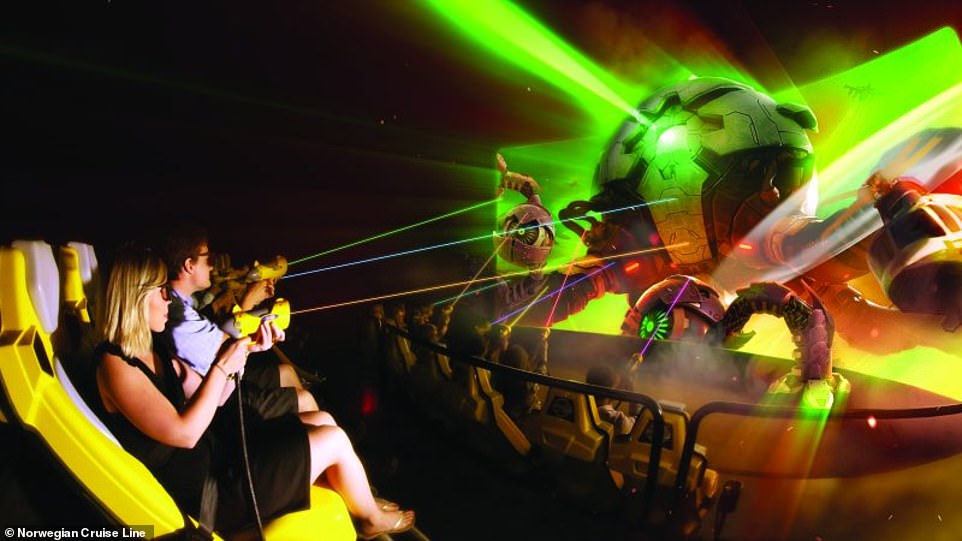 The Robot Riot ride, which will be housed inside Galaxy Pavilion, a virtual reality complex on board Norwegian Encore

Norwegian Encore will lead the way for entertainment.

That’s thanks to a Galaxy Pavilion virtual-reality complex – an indoor centre housing labyrinth escape rooms, simulators, mazes and multi-sensory virtual experiences, along with some of the latest cutting-edge technology from go-karting at sea to laser tag in a lost city of Atlantis arena.