A Mormon leader is denouncing racism at a church conference in Utah.

Quentin L. Cook, a member of a top governing body, spoke briefly about race Saturday during a speech on the importance of humility.

Cook reminded members that the religion’s signature scripture, the Book of Mormon, declares that ‘we all are unlike unto God’.

He said anyone who claims superiority based on race, sex, language or economic class is morally wrong and doesn’t understand God’s purpose for his followers.

Cook’s comments come after church leaders in August condemned white supremacist attitudes as ‘morally wrong and sinful’ after a protest over a Confederate War monument in Charlottesville, Virginia, descended into deadly violence. 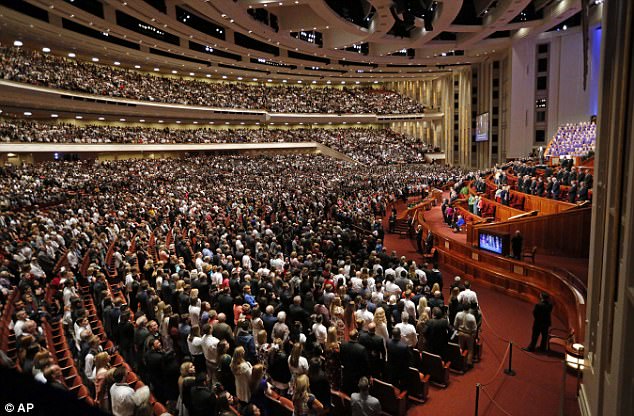 The twice-yearly conference brings 100,000 people to Salt Lake City to listen in person to speeches. It is watched by millions more around the world who belong to a religion of nearly 16 million members

The Church of Jesus Christ of Latter-day Saints still deals with questions about their views on race, in part because the faith banned men of African descent from the lay clergy until 1978.

The church now disavows the theories of the past that black skin is a sign of divine disfavor or curse, which led to the ban.

Mormon leaders are also cautioning members about the pitfalls of social media.

Stevenson warns that portraying an unrealistic image of life on social media or comparing yourself to this idealized reality leads to discouragement and envy.

Stevenson directed members to use social media and technology to teach, inspire and lift each other.

Earlier, Bonnie L. Oscarson warned youth that being overly preoccupied with followers and ‘likes’ on social media can lead to forgetting to show love and concern for others.

Oscarson is a leader of the Young Women program.

Another Mormon leader is calling on church members not to drive themselves into depression or eating disorders in the pursuit of Christ-like perfection.

Jeffrey R. Holland, who is also a part of the Quorum of the Twelve Apostles, said Saturday during a church conference that following doctrine and seeking personal improvement shouldn’t lead to getting ulcers, bulimia, depression or lowered self-esteem. 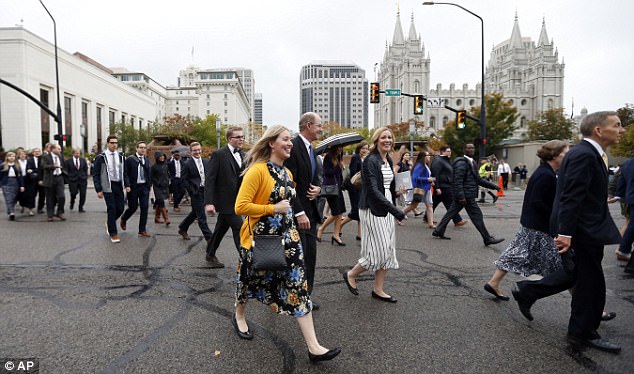 Despite denunciations of racism, the faith continues to reaffirm its opposition to same-sex marriages. People are seen above in Salt Lake City arriving for the morning session of the conference

He instructed the nearly 16-million members of the religion to strive for ‘steady improvement without obsessing over what behavioral scientists call ‘toxic perfectionism.’

Holland lamented that he often hears from Mormons that they feel like they don’t measure up.

Despite denunciations of racism, the faith continues to reaffirm its opposition to same-sex marriages.

Dallin H. Oaks, a Quorum member, urged followers to adhere to church teachings that dictate that marriage should be reserved for heterosexual men and women.

Oaks acknowledge that this belief puts Mormons at odds with current laws, including the recent legalization of gay marriage in the United States.

He told Latter-day Saints that the religion’s 1995 document that details the longtime teachings called ‘The Family: A Proclamation to the World,’ is not a policy statement that will be changed.

The speech followed a push in recent years by The Church of Jesus Christ of Latter-day Saints to uphold theological opposition to same-sex relationships amid widespread social acceptance while trying to foster an empathetic stance toward LGBT people.

Some members have called on leaders to do more to ensure gay church members feel accepted.

The twice-yearly conference brings 100,000 people to Salt Lake City to listen in person to speeches.

It is watched by millions more around the world who belong to a religion of nearly 16 million members.