Polls have opened in Egypt’s presidential election with the outcome – a second term for President Abdel-Fattah el-Sissi – a foregone conclusion.

People chat and smoke traditional water pipes under an election campaign banner for Egyptian President Abdel-Fattah el-Sissi, with Arabic that reads, “for the sake of the nation security”, in Cairo, Egypt, Saturday, March 24, 2018. President Abdel-Fattah el-Sissi, the general-turned-president, will stand for re-election next week against Moussa, a little-known politician who has made no effort to challenge him. (AP Photo/Amr Nabil)

The election will last three days, starting on Monday.

A general-turned-president, el-Sissi is challenged by Moussa Mustafa Moussa, a little known politician who joined the race in the last minute to spare the government the embarrassment of a one-candidate election.

Moussa has made no effort to challenge el-Sissi, who never mentioned his challenger once in public.

Authorities hope enough people – there are nearly 60 million eligible voters – will vote in the balloting to give the election legitimacy.

A number of other presidential hopefuls stepped forward earlier this year, including some who might have attracted a sizable protest vote. But they were all either arrested or intimidated out of the race.

Egyptians are heading to the polls but the presidential election this time is not about who wins – that was settled long ago – but about how many people bother to cast ballots.

Voting starts on Monday and is to last three days.

Authorities hope enough people will vote for President Abdel-Fattah el-Sissi to lend legitimacy to an election in which the only other candidate is an obscure politician who has made no effort to challenge him.

Cairo streets are lined with campaign banners and posters extolling el-Sissi, who has done little in the way of traditional campaigning, and has not publicly mentioned his ostensive challenger, Moussa Mustafa Moussa.

Several other presidential hopefuls who had stepped forward earlier this year have either been arrested or pressured to withdraw. 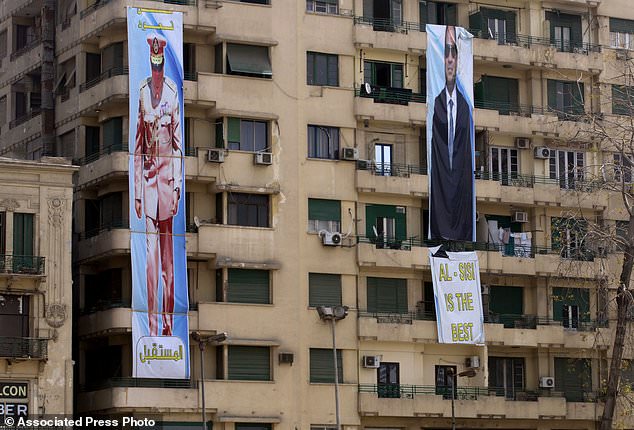 FILE – In this Thursday, March 22, 2018 file photo, election banners for Egyptian President Abdel-Fattah el-Sissi, hang in Tahrir Square, which was the focal point of the Jan. 25, 2011 Egyptian uprising, in Cairo, Egypt. Seven years ago, Cairo’s Tahrir Square was filled with tens of thousands of Egyptians demanding change. Now it is festooned with portraits of the president, vowing continuity. Almost all traces of the popular revolt that overthrew autocrat Hosni Mubarak in 2011 are now gone. (AP Photo/Amr Nabil, File)