The life-changing magic of a roast chicken dinner

Isabel Vincent’s marriage was falling apart. Her elderly neighbour was grief-stricken. Little did they know that a supper invitation would heal them both

Edward’s passion for cooking led to much  more for Isabel

For Edward, cooking was not just about satisfying hunger. It was a passion. At our weekly dinners at his home in New York he taught me how to create the perfect pastry and to sprinkle balsamic vinegar on pasta to allow the sauce to cling. But from the very beginning, I knew that he was also teaching me the art of slowing down and taking the time to think through everything. He spent hours writing out recipes for me and giving me frank opinions about how I was leading my life. He was still mourning his wife of 69 years and I was starting to see how unhappy I was in my marriage. Soon he became so wrapped up in helping me navigate my middle age, that sorting out my problems dispelled his dark notions of dying with his beloved Paula.

‘We need to work on your feminine enhancement,’ he said as he brought his fennel remoulade to the table. He had also brined a chicken for two days in apple cider and salt, before rubbing it with thyme, rosemary and butter and roasting it in a paper bag for hours.

I knew he didn’t mean to be unkind. He felt he was simply imparting wisdom without much time left. At a previous dinner when I told him about my faltering marriage, Edward was silent. But a few days later I received a letter from him which I still read when I’m feeling besieged. ‘You are a fine and talented woman whose potential is yet to be realised given the love, support and luck that we all need. Why you gave away control of your own life is the mystery that you are now unravelling. When you get it back, hold on to it.’

For Edward, meeting Paula at a New York theatre was love at first sight. Both were aspiring actors. ‘She melted my heart,’ he told me one evening as we sat down to oysters. ‘What’s the occasion?’ I asked. ‘Do we need one?’ he replied. ‘Paula and I never needed an occasion. We never gave each other presents either as every day we spent together was a gift.’ 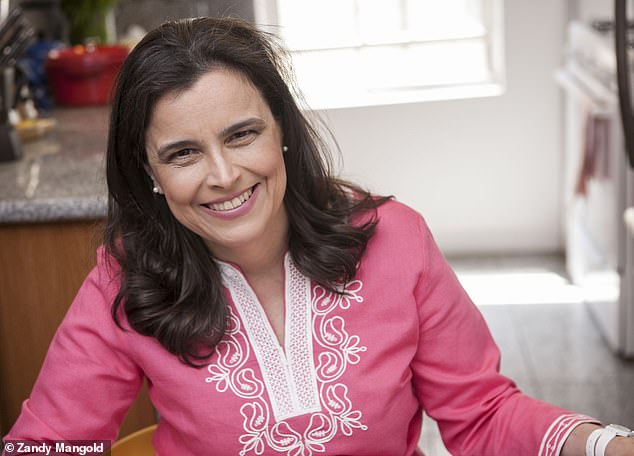 Isabel today: ‘Edward taught me how to make the perfect pastry… and the art of slowing down,’ she says

I knew a lot of thought must have preceded his comment about my appearance but I wasn’t prepared for what came next. ‘We need to get you something special. I’d like to see you in a nice dress and some heels. We need to go shopping.’

Maybe it was the sweet spongy pudding that followed the delicious roast chicken or the wine, but I heard myself happily acquiescing to the idea. Yes, I was Edward’s special project. I had no doubt that fixing my confused, middle-aged existence was giving him some kind of purpose in life. But I did make him promise one thing – that he wouldn’t actually buy me anything. ‘OK,’ he said, ‘we’ll just look.’

He insisted that it had to be Saks Fifth Avenue. We met at the nearest bus stop on a bone-chillingly cold winter afternoon. He immediately admonished me for not having enough lipstick on. I rummaged in my bag for the new Dior I had just bought and, squinting at my reflection in the bus shelter, tentatively began to apply some more. When I looked at Edward, he laughed, shaking his head in mock disapproval, clearly enjoying his role as a stern Henry Higgins to my recalcitrant Eliza Doolittle. ‘Put more on!’ he said, tapping the ground with his cane for emphasis. ‘You’re not using enough!’

When we reached Saks, Edward knew exactly where to go – the second floor with its luxurious displays of designer clothes. He studied the sales racks and came back with a an elegant black, hip-hugging Burberry dress, embellished with black lace at the waist and costing a small fortune, even on sale. Somehow it didn’t surprise me that of all the dresses I tried on, Edward’s choice was the perfect one, even if it was a little tight. He had worked as a tailor and understood a good cut. Resting his chin on his cane, Edward asked me to turn around before pronouncing. ‘It really shows off your figure – I didn’t even know you had one!’

It was too tight but, for the first time in a long while, I noticed my hips, legs and breasts. I was a woman and it flattered me in a way that I had ignored for many years. Suddenly I needed this dress, even though I had a wardrobe full of black dresses, most of them loose-fitting and shapeless. Edward had selected it, so I didn’t even blink at the price tag and the sales lady found me the dress in my size at another store.

Edward and I parted on the ground floor of Saks and I found myself smiling. I had bought a dress that wasn’t exactly Cinderella’s ballgown but still seemed to transform me. And I was now looking out for him. I enjoyed calling him, having dinner with him and, in the process, became obsessed with good food and wine. Everything I found, from Italian truffle salt to the pink Vinho Verde that Edward loved, I took with me when I went for dinner. I was still smiling when I followed him to the door, just to make sure he was OK. Then I watched as he headed up Fifth Avenue and disappeared into the holiday crowds to buy squid for our next dinner.

The last photograph taken of Paula watched over us in Edward’s apartment. Although her face was lined, I would be hard-pressed to describe her as elderly. She was resplendent in red lipstick and dangly earrings, her chin slightly raised in an air of self-assurance. Edward moved the photo with him so he could talk to Paula when he cooked. After she died, he began writing her letters, telling her what he had cooked and all about me. ‘Paula would have liked you because you have character,’ he said. 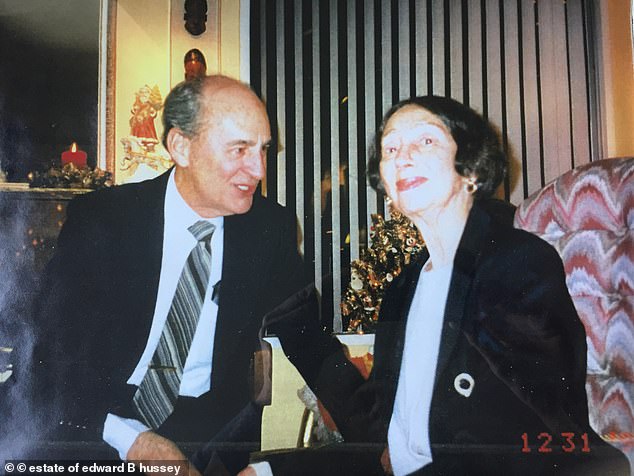 Edward with his wife Paula in 1996: he used to talk to her picture while he was cooking

One day Edward surprised me by bringing out a black and white photo of Paula that I had never seen before, a portrait when she was in her 20s – young, beautiful, confident. ‘Paula had something,’ he said, ‘allure.’ Edward had been wanting to frame the picture but for months after her death, it lay among the stacks of letters that he wrote out in longhand on his desk. Coming across the picture recently had inspired him to finally get it done. He told me how he had shown the sales person the picture and asked her to help him choose a frame. ‘She’s so beautiful,’ said the young woman. Encouraged by her response, he launched into the story of how they had met, how he had taken the image on a beach. And then when he had asked for the sales assistant’s name, his heart had skipped a beat when she replied, ‘Paula’.

I think now that Edward was preoccupied with defining love. I never understood if this was for my benefit or if he was trying to come to grips with his special relationship with Paula. Every morning when he sat down to his coffee and scrambled eggs, he went through a few pages of the dictionary alphabetically, searching for words that added to his compendium of love. The last time I checked, he hadn’t progressed beyond the Cs – caring and cherished.

‘You make a mistake if you don’t try to figure out love,’ he told me as he served boldly tangy tarte au citron. ‘If you give yourself to someone without understanding it, you are only asking to be a slave.’ A few days later I received a four-page letter. ‘What is love? Like the majority of us, you struggled with the answer for the simple reason that we seldom define it. Love is being, not belonging. Giving and receiving, not possessing.’ I’m not sure I understood then what he was telling me. But there was something beautiful about the way that he was exploring the meaning of love.

On New Year’s Eve I finally took the dress from Saks out of the box. I had been invited to a party and was going alone. I knew I was going to lose my nerve but resisted the temptation to ring in the New Year by myself by going to Edward’s apartment to show off the dress.

Edward seemed tired and his apartment was unusually silent – no jazz came out of the living room, no cheery French songs that he liked to sing along to. But my arrival seemed to give him purpose. ‘Turn around,’ he ordered and steered me to the mirrored wall in his dining room. He told me my earrings were all wrong. Then he was troubled by my hair. ‘You need to pull it behind your ear on the left side and let it drape down your face on the right.’ He told me to remove my watch – ‘It’s too distracting.’ He grabbed his cane and limped into the bedroom to rummage through Paula’s jewellery box. He came back with a bold, brown enamelled choker that had been one of her favourites. ‘Now you look smashing,’ he said. I stood in front of the mirror. The necklace was indeed perfect, the hair just as he had ordered. Even the Dior lipstick, which I had applied earlier, looked natural to me. I was beginning to recognise this new woman I had become.

I caught sight of Edward looking admiringly at his project. ‘One day, Edward, I hope I am lucky enough to meet a man just like you.’

He seemed startled by my words and blushed. Our eyes met in the mirror and there was a long silence. ‘I wouldn’t want you to be late for the party,’ he finally said as he helped me on with my coat. ‘Pump yourself up kid, you’ve got a lot going for you. And,’ he added, reaching over to smooth my hair, ‘knock ’em dead.’

Edward died at the age of 94, but not before he had read Isabel’s book about their friendship. Isabel is now in a happy relationship with a new partner who cooks. The first time he came to her apartment, he brought her fresh herbs from his garden. ‘I made him Edward’s shrimp and corn chowder. The herbs reminded me instantly of Edward,’ she says.