When it comes to sweating its assets, Disney is in a money-making class of its own. The original animated version of The Lion King took hundreds of millions of pounds when it was released in 1994, made hundreds of millions more through VHS and DVD sales, and then made even more when it was turned into a stage musical that has been put on all over the world and shows every sign of running for ever.

Now, just in time to celebrate the title’s 25th anniversary, along comes a ‘live-action’ version, introducing Simba, Nala and the rest of the savannah-dwelling lion gang to a whole new generation. 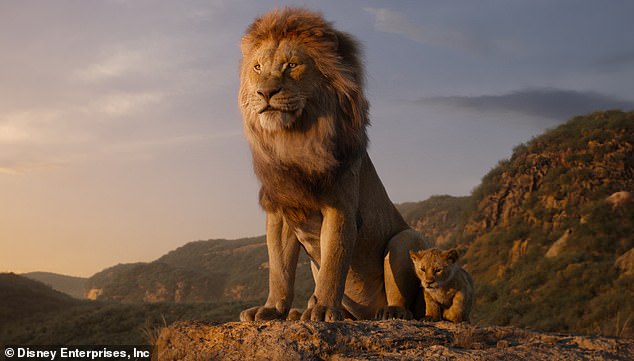 Simba, the spirited lion cub, still grows up idolising his father – the lion king, Mufasa. As Mufasa, the booming James Earl Jones is the only voice to return from the original.

And very good it is too – the photorealistic animation is stunning, the screenplay has been given a bit of a 21st-century tweak, and Seth Rogen – voicing Pumbaa the warthog – gives one of the best comic voice performances you’ll ever hear.

I say all that as someone who never really ‘got’ the original, what with its rather earnest-feeling storyline and so-so songs by Tim Rice and Elton John. Give me the toe-tapping fun of the original Jungle Book any day.

It would be wrong to say the new film sweeps all such reservations away; I still find the Shakespearean tale of regicide, exile and leonine revenge hard going, and have always had a problem with talking animals, particularly when they look as realistic as they do here. 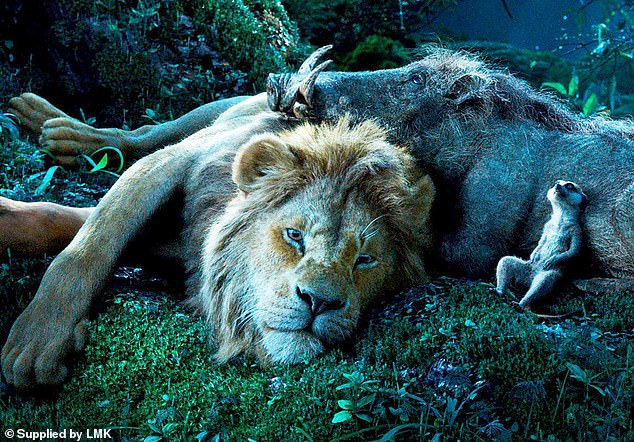 The arrival of Seth Rogen as Pumbaa, and indeed of Billy Eichner as the voice of Pumbaa’s meerkat sidekick Timon marks the turning point for the film (With Donald Glover as Simba)

But it does look fabulous, Rogen’s is not the only voice performance to delight and – what do you know – Beyoncé comes close to making me feel different about Can You Feel The Love Tonight.

Mind you, Disney has certainly played it safe. This isn’t quite a frame-by-frame remake of the original but it’s very close, with the basic story remaining essentially the same.

Simba, the spirited lion cub, still grows up idolising his father – the lion king, Mufasa – but he’s reckoned without the scheming jealousy of his uncle, Scar, who’s desperate to have the lion throne for himself but needs to get Mufasa and Simba out of the way first. 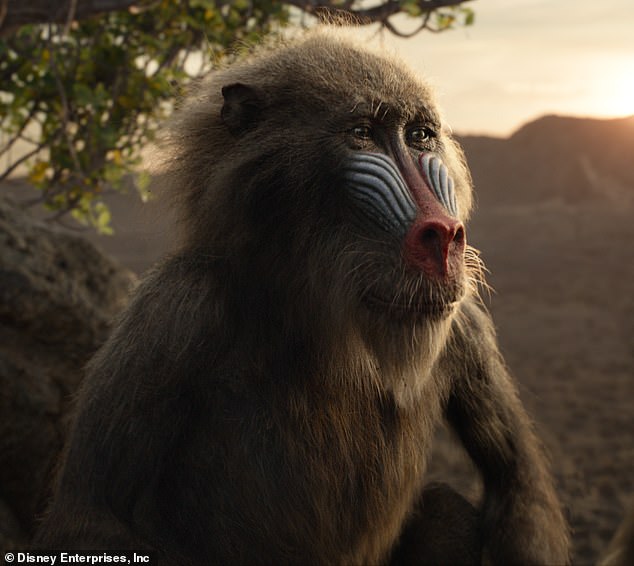 Disney has certainly played it safe. This isn’t quite a frame-by-frame remake of the original but it’s very close, with the basic story, which included Rafiki, remaining essentially the same

As Mufasa, the booming James Earl Jones is the only voice to return from the original, which means that once again we have to wrestle with the disconcerting paradox of Simba adoring a father who sounds just like Darth Vader.

But you can see why Disney retained Jones’s immaculately enunciated services – he’s 88, one of the most respected black actors of his generation and right now, in these more enlightened times, there isn’t a film company in the world that would make an Africa-set film like this without employing a voice cast predominantly of actors of African origin.

As a result, Simba – voiced by Matthew Broderick in the original – is now played by Donald Glover (Mr Childish Gambino himself, of course), while Chiwetel Ejiofor has the unenviable task of taking over from Jeremy Irons, whose deliciously wicked turn as the scheming Scar helped him steal every scene he was in. 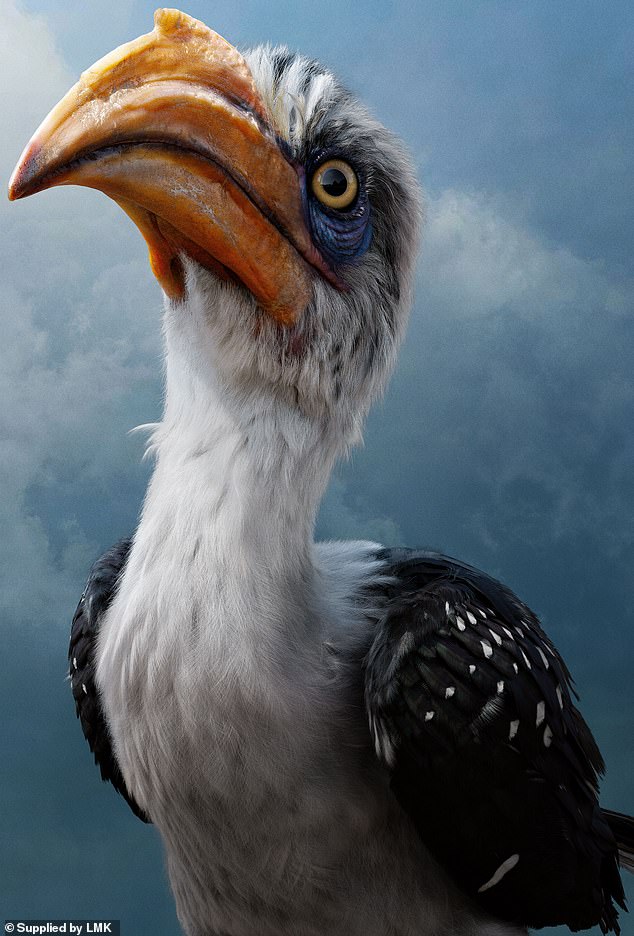 Director Jon Favreau has always been good at humour (pictured above the funny Zazu the hornbill, originally played by Rowan Atkinson)

Ejiofor gives it his best sinister shot but can’t quite match it for sheer wickedness. He must, though, be given full marks for bravely croaking his way through Be Prepared in a manner that leaves him sounding like a tuneless cross between Rex Harrison and Leonard Cohen.

In a film where the lack of resistance shown by the lionesses (or female lions, as Hollywood would no doubt call them) as Scar seizes power is notably out of step with the times, Beyoncé certainly impresses as the voice of the feisty Nala.

But it’s the arrival of Rogen as Pumbaa, and indeed of Billy Eichner as the voice of Pumbaa’s meerkat sidekick Timon, that marks the turning point for the film. Suddenly, there are jokes – and good ones – where, until then, it’s all been a bit serious and sad.

A hyena researcher sued Disney for ‘defamation of character’ for its portrayal of the animals in the original film.

‘Now that’s what I call umami!’ sighs Pumbaa as he introduces Simba to his new red-meat-free diet of insects and bugs. Director Jon Favreau has always been good at humour.

Best known for directing the first two Iron Man films, Favreau presumably got the Lion King job on the back of his live-action version of The Jungle Book (again for Disney) three years ago.

He does much better here, staying more faithful to the original and keeping not just all the old songs but adding a new one too – Spirit, co-written by Beyoncé.

Even Favreau, however, can’t stop the denouement from feeling contrived, complicated and unconvincing. But by then The Lion King has surely woven enough screen magic to ensure huge success at the summer box office.

Hakuna matata, as they say in these money-making parts.

Hot on the heels of Vita & Virginia comes another tale of period lesbian love with this one – based on a novel by the writer Fiona Shaw – unfolding in the highly disapproving environs of a small Scottish town in the Fifties, a town, we are told, ‘too small for secrets’.

Holliday Grainger plays Lydia, a pretty mill-worker newly deserted by her feckless husband. But when she also loses her job and her home, it seems life for her and her ever-watchful young son (Gregor Selkirk) might fall horribly apart. 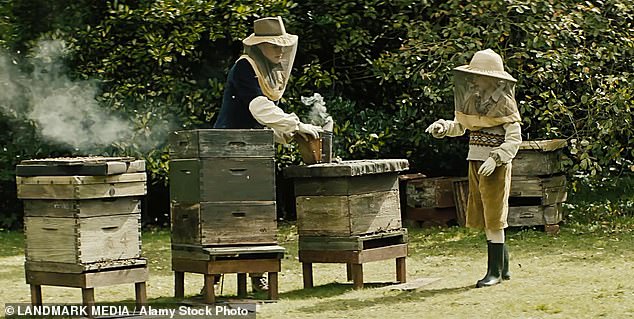 When Lydia looses her job and her home, it seems life for her and her young son might fall apart. Until the newly arrived doctor (Anna Paquin, above with Gregor Selkirk) befriends them

Until the newly arrived doctor (Anna Paquin) befriends them and offers Lydia a job as live-in housekeeper. And yes, as the title suggests, there are hives in the garden for Lydia’s son to investigate; he can even talk to the bees, if he likes.

Directed by Annabel Jankel, it’s a frustrating film, but nice performances from Grainger and Paquin, and structural echoes of The Go-Between, slowly win you over, only to let you down as the film descends into a strange mix of melodrama and apian fantasy.

If they gave out awards for unrelenting misery, William McGregor’s historical Welsh drama would take a lot of beating. My word, this is bleak: a slow-moving mix of 19th-century mud, low cloud and weekly chapel.

It’s a shame as Eleanor Worthington-Cox is terrific in the title role of Gwen, an attractive and intelligent teenager growing up on the remote family farm in Snowdonia and trying to make the best of impoverished family life while her unsmiling mother (Maxine Peake) runs the farm and her father is away at war.

But there are dark forces at work, as it becomes clear that the local slate mine needs the farm for expansion and will do almost anything to get it.

McGregor, who has directed Poldark, writes and directs and whips up a convincing sense of impending doom but eventually goes too far and loses us along the relentlessly unsunny way.

Why acclaimed theatre director Dominic Dromgoole thought this adaptation of a Robert Holman play from the Eighties would make a decent film is unclear. It’s in three separate parts – in 1944, 1982 and 1996 – all vaguely linked by the repercussions of war. 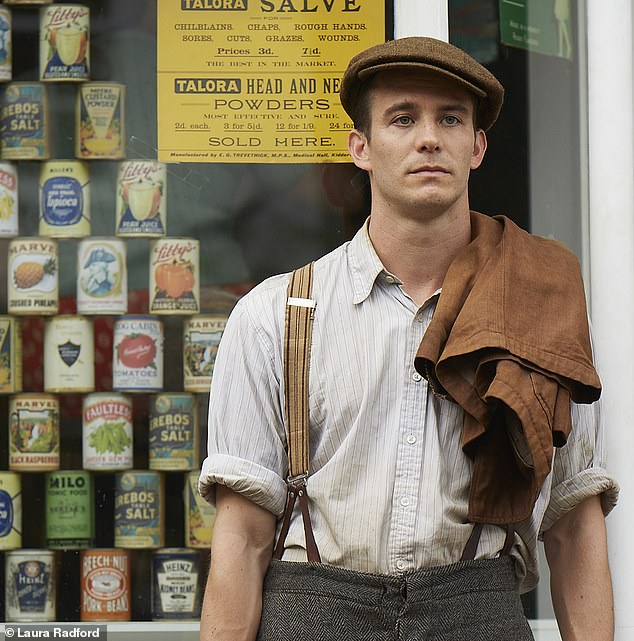 Making Noise Quietly is in three separate parts – in 1944, 1982 and 1996 – all vaguely linked by the repercussions of war. Above, Luke Thompson as Oliver

Essentially conversation pieces, all are marked by modestly decent acting but fairly indifferent writing. Sincerely made but perilously close to unwatchable.