The lions weep tonight: ‘Lonely’ zoo animals around the world are missing visitors during pandemic

Zoos across the world say their animals are becoming ‘lonely’ without visitors as a result of the coronavirus lockdown.

Zoo keepers have shared their wide-ranging methods to keep animals active and engaged as even those that have since reopened struggle to pull in the usual number of visitors to their sites.

Since the coronavirus pandemic began keeping visitors at home, the jaguars and chimpanzees at the Oakland Zoo have enjoyed the quiet, venturing out to areas of their exhibits they usually avoid.

The bears and petting pigs miss the children, though, and are seeking more attention from zookeepers.

Dublin Zoo said animals were ‘wondering what’s happened to everyone’ after closing to the public earlier this year.

Director Leo Oosterweghel said the animals look at him in surprise when he attends to them, as they are ‘used to visitors’. 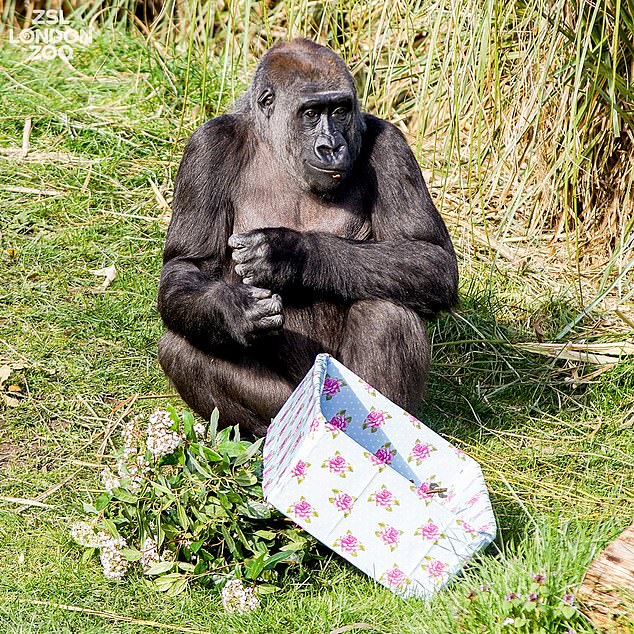 Gorilla Keeper Dan said: ‘We started to see a few wild ducks visiting the zoo instead of people, so our gorillas Alika and Gernot have been having fun chasing them – they never catch them, of course.

‘We used the time thinking up creative extra activities for the primates – just like parents around the country, whose children are off school.

‘We’ve made ‘snowballs’ for the gorillas – balls of nuts and seeds that we throw into Gorilla Kingdom for the troop to play with and then eat.’

She said: ‘While we missed having visitors – as we love sharing our work and educating people about our animals – we were lucky to have so many unique residents to take our mind off the situation for a while.

‘They all need feeding, cleaning up after and entertaining every single day, so it was nice to have a routine to keep to. Looking after our animals kept us grounded.

‘As a team, we spent extra time with all our animals, including the dwarf mongoose, for example.

‘Mongoose are very intelligent animals and really enjoy one to one training – they’re very responsive to target training, which is where we hold out a target – such as a ball on a stick – and encourage the animals to come over and touch it in order to receive a treat. 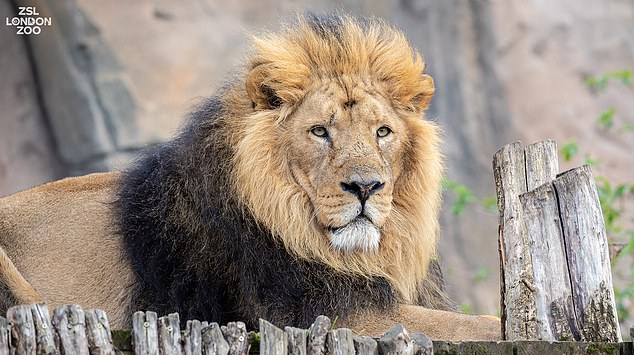 ‘Our Asiatic lions and our Sumatran tiger like to watch what’s going on from high vantage points in their homes, keeping an eye on their territories,’ says senior keeper Tara Humphrey 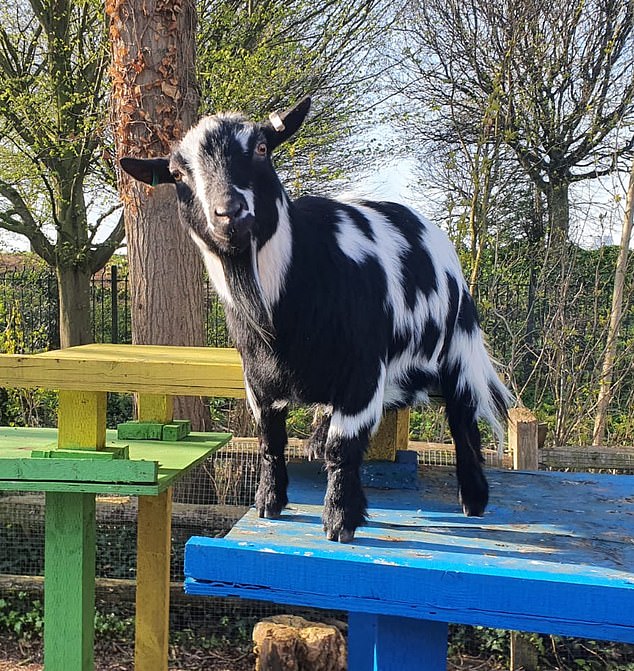 Normally, excited visitors would suddenly appear, all vying to pat the pint-sized herd of pygmy goats. But today, like every day since the zoo closed its doors on March 21, no one arrives

‘It’s important for us to be able to call the animals over to us so we can weigh them and perform regular health checks, so we do training like this with the animals we look after every day.

‘We increased the amount of enrichment for animals such as the mongooses – entertaining activities that encourage them to use their natural skills – they particularly like scented enrichment, where they follow strong scents such as natural spices to find their food.

‘We also like to provide them with rotting logs that they can break down and forage for insects in.

‘Our mongoose also had a new litter of pups that kept them busy during lockdown but we still made sure to provide them other exciting stimulants like these.’

The zoo has since reopened its doors with social distancing measures in place but, as visitors numbers struggle to reach their usual peak the charity behind the zoo is appealing for donations to help keep their doors open.

12,000 miles away, At Orana Wildlife Park in Christchurch, New Zealand, rhinos and giraffes were still turning up for their ‘meet the public’ appearances after the site shut.

Spokesperson Nathan Hawke said zookeepers had observed that many of their rare and endangered animals were missing the attention of humans, forcing staff to find ways of keeping them entertained and stimulated.

Tricks include spraying cologne and perfume in hiding places to intrigue the lions and offering puzzle feeders or playing unusual sounds to keep the keas on their toes. 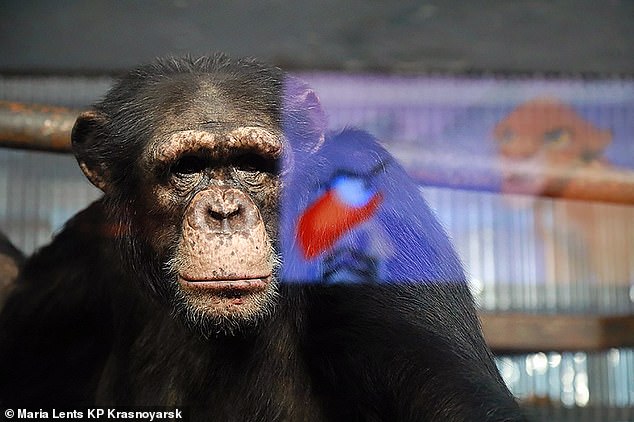 One of the chimps watches the screen in their enclosure in Krasnoyarsk, where zookeepers say the animals have been miserable since visitors stopped coming 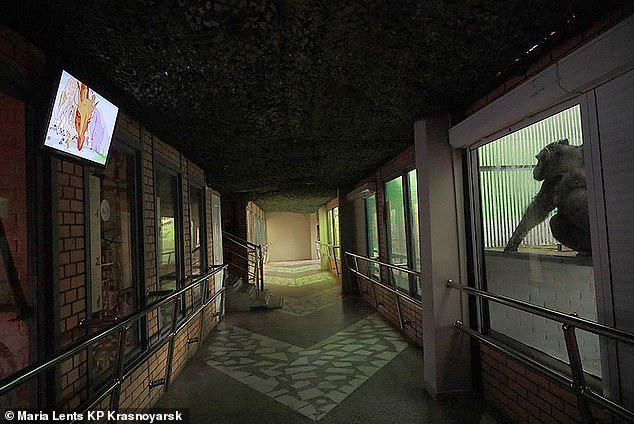 An empty corridor in the Royev Ruchey zoo, which was closed to visitors due to the pandemic

Chimpanzees at a Russian wildlife park watched cartoons to stave off depression while visitors stay away during the lockdown.

The sociable primates missed the regular visitors to the Royev Ruchey Nature Park in Krasnoyarsk, who were banned by order of Siberian health officials.

‘After seeing them getting sad we decided to put up a TV set on a wall, and started showing cartoons,’ said park director Andrey Gorban.

The pair have been watching The Lion King, among other animations.

‘Their favourite is a Russian cartoon about an exhausted mother monkey who lives in a zoo,’ park director Gorban said.

‘They are ready to watch it non-stop.’

Tikhon, the male chimpanzee, has been lying on a sofa and snacking on raw vegetables as he enjoys the cartoons.

Keepers at Sumida Aquarium in Japan asked people to make video calls to its eels so the sensitive creatures remembered that humans exist and do not pose a threat.

The Sumida Aquarium, housed in the landmark Tokyo Skytree tower, said its animals have become used to a largely human-free environment during the coronavirus calm.

Meanwhile, a gray cockatoo at the Cape May County Zoo, in New Jersey, US, became so distressed at his newfound solitude that he began self-harming, plucking his chest feathers until he gnawed a hole in his skin that had to be covered with a vest.

Phoenix Zoo in Arizona, US, also reported a change in behaviour in their animals.

Linda Hardwick, communications director told the BBC: ‘We noticed that some of our more ‘social’ animals are not a fan of the stay at home and social distancing orders.

‘Primates especially have noticed our guests are gone and go looking for them.

‘Our Tropical Flights Aviary is home to a very special, and social bird; Dynah the Bali myna, who is missing the attention of guests. Bird keepers are visiting her frequently to curb her loneliness.’

The teams have been working to provide extra enrichment for some of their animals which included giving tiger Indah a barrel in a pool of water, making a fun and engaging toy.