Scores of planes have been noisily flying over Sydney’s beachside suburbs after a runway reopened for the first time since the start of the Covid-19 pandemic.

Sydney Airport’s east-west runway accepted its first flight since April 22, 2020, on Sunday after it was shut down to make way for the extraordinary demand for aircraft parking.

The runway accommodated almost 50 grounded aircraft from almost all domestic airlines during the crisis, which saw domestic and international flights grounded in a bid to contain the virus.

Confused Sydneysiders took to an eastern suburbs Facebook group to ask why loud planes were suddenly zooming over their homes.

Scores of planes have been flying over some Sydney suburbs for the first time in more than a year. Pictured: A plane flying over the city

‘I’ve noticed a lot of low flying planes over Coogee in the last week – I’m sure there weren’t so many directly over Coogee before?’ one woman asked.

‘During the day it’s one after the other and it’s pretty loud. Does anyone know if there’s been a change of route / has noticed this too?’

Residents flocked to the comments to share their theories, with some incorrectly claiming flights paths were changed to accommodate for wind direction.

‘We are often on the flight path depending on winds… and expect 100 times more planes going over when life gets back to normal,’ someone replied.

‘The wind… they use a different runway when wind comes from a particular direction,’ another added.

But others pointed out that Sydney has not had much wind over the past week and told their neighbours about the east-west runway. 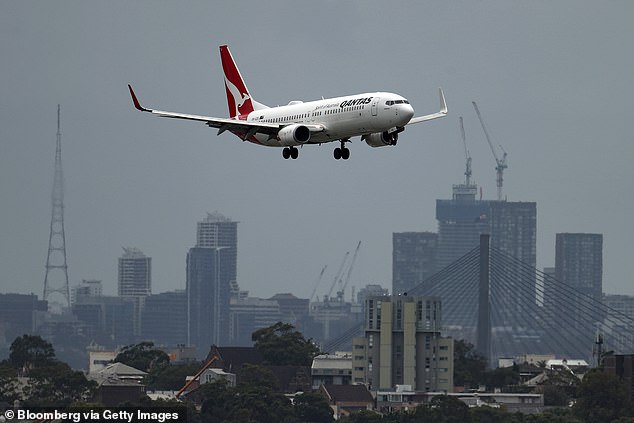 The east-west runway has reopened, meaning people who live in Coogee and Randwick, Bexley and Hurstville will hear more planes. Pictured: A plane flying over the city’s west in February

‘It’s not temporary, they’ve reopened the other runway as shut it due to no planes during Covid,’ one woman wrote.

Another said: ‘Through Covid, a lot of the grounded planes were parked on the east west runway. They have now been moved and that runway is back in use which means more planes over Coogee.’

‘The re-opening of the runway means residents who haven’t seen an aircraft overhead for more than a year will notice an increase in traffic,’ she said.

‘Particularly to the east in suburbs like Coogee and Randwick, and to the west around Bexley and Hurstville.’

The move to re-open the runway will help the airport accommodate essential maintenance works on the main north-south runway, while the gradual improvement in domestic air traffic continues.