Exposed: The loophole that will allow Victorians to enter New South Wales without passing a police checkpoint – and they won’t have to self-isolate

Dozens of Melbourne residents could still flood into New South Wales by car without passing a police checkpoint.

Melburnians are banned from entering NSW in a bid to stop the spread of coronavirus, with police checkpoints on the northern side of the Murray River.

Queensland, South Australia, Western Australia, Tasmania and the Northern Territory have also barred Victorians, other than essential service workers, and those states now require returning residents who have been to Melbourne to be quarantined for 14 days.

Melburnians, however, can still fly direct to Canberra and not have to self-isolate.

The Australian Capital Territory is allowing visitors from all parts of Victoria to enter if they have a special exemption.

Dozens of Melbourne residents could still flood into New South Wales by car without passing a police checkpoint with new police checkpoints for those leaving the Australian Capital Territory (border pictured). The ACT is allowing Melburnians to visit with special exemptions

No roadblocks or checkpoints, however, have been set up for those leaving the ACT and entering NSW to ascertain whether they have been to greater Melbourne or the neighbouring Mitchell shire.

‘We don’t have a hard closure like the Victorian border,’ she told Daily Mail Australia.

‘Certainly, police will be acting on information they receive. We can’t really speculate.’

Treasurer Josh Frydenberg, who lives in Melbourne, is visiting Canberra on July 23 to deliver an economic statement outlining the future of the $70billion JobKeeper wage subsidies program.

‘He will seek the appropriate exemptions for travel in and out of the ACT,’ his spokesman told Daily Mail Australia. 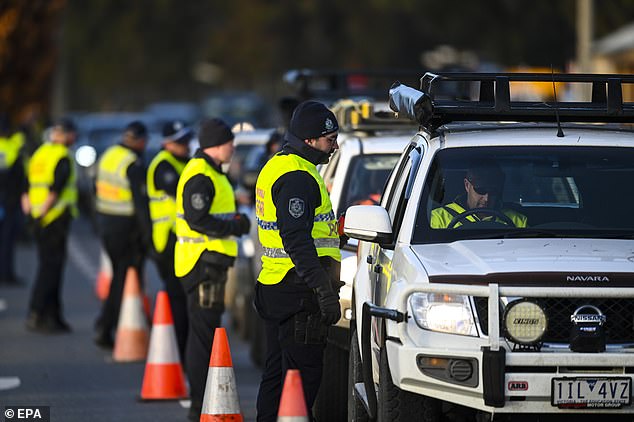 Under the ACT’s COVID-19 rules, Victorians are banned from entering the capital territory however exemptions are being granted to the likes of federal MPs, provided they ‘return to their home jurisdiction at the earliest reasonable opportunity’.

‘Members of Parliament can apply for an exemption as an essential worker,’ an ACT Health spokesman told Daily Mail Australia.

‘Exemptions will only be granted if the individual is allowed to travel under Victoria’s current public health restrictions, and only if there is an exceptional need to travel to the ACT.’

As of Monday morning, ACT Health had received more than 800 applications for exemptions, since they were introduced on Wednesday last week.

There are now almost 400 people in self- quarantine in the ACT.

The NSW Police Force has set up roadblocks and is only allowing Victorians living at Wodonga to enter the neighbouring NSW city of Albury if they have a permit.

Queensland is allowing visitors to enter the state, for the first time since March, but police check points have been set up on the NSW-Queensland border at Coolangatta to determine if tourists have been to Melbourne in the past 14 days.

Victoria recorded 177 new cases of coronavirus since Sunday, with 1612 cases are now active in the state.

This includes 72 people in hospital suffering from COVID-19 – 17 of whom are in intensive care.

NSW now has 21 active cases, with 13 visitors to the Crossroads Hotel at Casula in Sydney’s south-west testing positive.

The tavern is popular with truck drivers making long-haul journeys from Victoria. 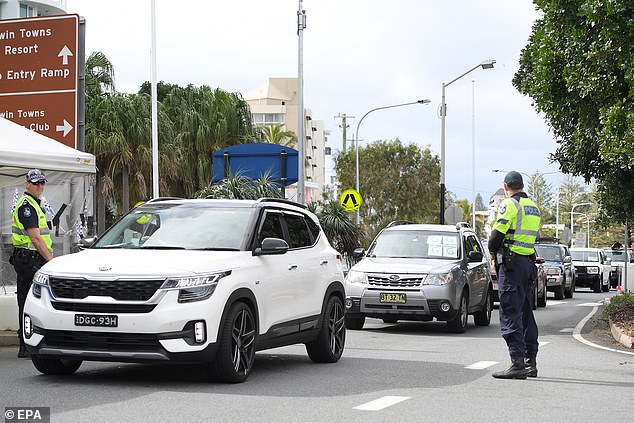 Queensland is allowing visitors to enter the state, for the first time since March, but police check points have been set up on the NSW-Queensland border at Coolangatta to determine if tourists have been to Melbourne in the past 14 days

Which places did infected people visit in New South Wales?

Anyone who was at these places at the same time is asked to watch for symptoms and get tested if they develop.