There’s a robin that thinks it’s a mouse, a kleptomaniac magpie and a villainous cat that sounds oddly like Margaret Thatcher. And they all look so soft you’ll want to reach out and stroke the TV.

Robin Robin, on Netflix later this month, is the latest film from Wallace & Gromit studio Aardman. A sweet, half-hour Yuletide tale about a bird reared by mice who has to find her true self, it has all the humour the studio is famous for. But Robin Robin, voiced by the likes of Richard E Grant and Gillian Anderson, is also Aardman’s first musical and has been made with felt puppets not the usual plasticine figures.

When Robin’s egg falls out of the nest, it fortuitously lands in the soft rubbish dump below, and she’s brought up by a family of burglar mice who live there. Pictured, Robin

When Robin’s egg falls out of the nest, it fortuitously lands in the soft rubbish dump below, and she’s brought up by a family of burglar mice who live there.

Robin knows she’s different, being loud and clumsy while the mice are stealthy and silent. After a trip to steal food to survive goes badly wrong, she resolves to show them she’s a true mouse by getting enough crumbs to feed them all. Robin duly falls into the clutches of the wily Cat but is saved by Magpie who lives in a glorious nest filled with shiny bottle tops. He has a dream of getting close to the star on the Christmas trees that humans love, and Robin vows to help him…

The story was created by its directors Dan Ojari and Mikey Please. ‘We wanted to explore the idea of what it feels like to be an outsider,’ says Mikey, ‘and to say that, if you can embrace the things that set you apart, you can find a lot of strength in that situation.’

In 2018, the animators managed to get a meeting with Aardman producer Sarah Cox and presented her with an illustrated booklet telling the story. She immediately loved it.

THE CAT IS NOT FOR TURNING

Cat, voiced by Gillian Anderson, bares her teeth at the little bird

If the rather terrifying Cat sounds like Margaret Thatcher, it’s no wonder. She was voiced by Gillian Anderson shortly after she finished her role as the former prime minister in The Crown.

Ironically, Gillian is allergic to cats but she says she was eager to play one. ‘I love animation and I remember being obsessed by Wallace & Gromit when it came out,’ she says. ‘So it felt like a good fit for me even if sometimes our directors’ vision for Cat was contrary to my natural instincts. To my mind, she was a villain; to theirs, she was an enigma. They wanted me to voice her with purring restraint, which I found incredibly hard. But when you hear it on screen you see they were right. It makes her much more terrifying.’

Almost as scary for Gillian was having to sing for the first time on screen. ‘It wasn’t until creators Dan and Mikey said, “OK, we’re going to pause while the musicians come in to work with you on the song.” And I thought, “The song? I missed that!” But in fact it was delivered mostly as spoken word rather than sung – which, again, is rather terrifying when you hear it.’

SEARCH FOR A STAR 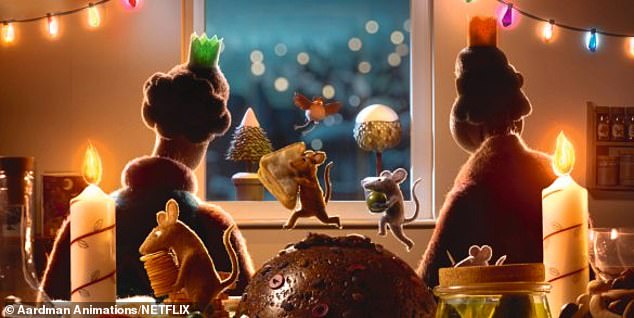 The naughty mice on a hunt for food

The producers spread the net wide to find the right voice to play the eager but flawed character of Robin. And the search paid off, with the role going to 14-year-old Bronte Carmichael, whose already-impressive CV includes Game Of Thrones and the film Christopher Robin.

‘We listened to hundreds of young actors before offering the part to Bronte,’ says producer Sarah Cox. ‘The difficulty was finding someone who was convincingly young yet was a good enough actress to hold the whole film together.’

Because of Covid, Bronte was often almost alone in a recording studio – with the two directors watching over Zoom – acting out what Robin would be doing. ‘Trying to imagine you’re running through snow or being chased by a cat was all new and quite demanding,’ says Bronte. ‘I ran on the spot and flapped like a bird to get out of breath. It helped me get into character.’

Even before the creators had approached Richard E Grant to play Magpie, they had a photo of him in the film Withnail And I as part of their inspiration board for the character. When they sent the script to him, they even added some footage of the puppet character acting out a small scene from the cult 1987 film that starred Richard as flamboyant, unemployed, alcoholic actor Withnail.

But the inspiration was about the look of the Magpie – all messy and angular – rather than the personality of a drunken, out-of-work thespian. ‘The two of them have no character similarities at all,’ insists Richard. ‘Withnail was a selfish curmudgeon, whereas Magpie likes to help people. He’s a lonely old bird who believes that collecting shiny objects is the route to and source of all happiness.’

A keen puppet collector, Richard, whose wife Joan recently passed away, says he loves the film’s message. ‘It’s about never giving up hope, no matter what obstacles are placed in your path.’ 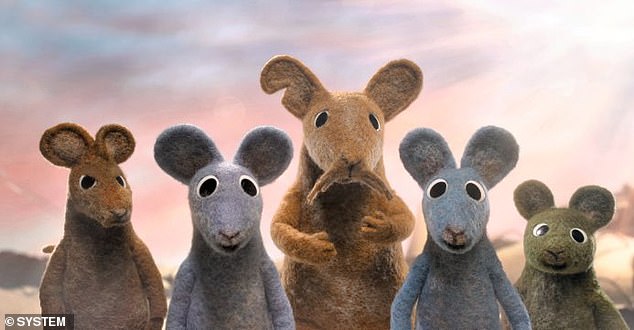 The appearance of each main character is accompanied by particular musical instruments – for Robin it’s a recorder, Magpie comes with a brass band, while the Cat has a cello and bass clarinet.

It’s the first time Aardman has used felt puppets in a production, the idea of creators Dan Ojari and Mikey Please, who love the old-fashioned, Christmassy look of the material. They used needle felt, which is created by agitating wool fibres until they bond to create a fluffy, solid fabric.

‘Needle felt is so tactile and has associations with Christmas decorations,’ says Dan. ‘It’s also luminescent and holds the light really well so the puppets can look like they’re glowing.’

The felt starts out as balls of fluff and is shaped into place, over a ball of foam, by stabbing it with a needle hundreds of times. Each of the key puppets was modelled out of rubber and wire overlaid with foam and then felt. And for technical reasons, different-sized versions of each main character had to be made, so there were 19 Robins, 11 Magpies and four Cats.

Because of Covid, a puppet had to go into 72-hour quarantine each time a puppeteer had finished with it. But the painstaking process of stop-action animation hasn’t changed – only about ten seconds of film were achieved each week.

Robin Robin will stream from Wednesday 24 November on Netflix.