The making of Billy Gilmour: His stated ambition is to become ‘the best player in the world’.

From Ardrossan harbour to Stamford Bridge, from the mini-kickers in Ayrshire to the Champions League in London, from Grado to Grady to making the grade, Billy Gilmour has already produced a remarkable storyline at just 18.

The investigation of any teenage star produces an understandable reaction. There is the natural sentiment from those who love him to protect him from the distracting fumes of hype.

There is also a commendable attitude from those who helped him along the way to avoid any perception they are taking credit when it is the player who has walked the hard yards from kickabouts in the garden to a place in the Chelsea first team.

There is also that Scottish cringe that insists ‘he’s not made it yet’. No, he has not fully achieved his potential but he has played in a midfield alongside Jorginho, the Italian worth £50million and rising, and Mateo Kovacic.

He has moved up the ladder as if chased by a wolverine coming off a diet.

Most importantly, Gilmour has no aptitude for complacency.

‘I want to be the best player in the world,’ he said in one of his rare appearances in front of camera. He may fail in this lofty ambition but it will not be a lack of effort that brings him up short.

His rise has been marked with three elements: ability, attitude and aid. The last comes in the help offered by a supportive family and a pathway that has been inhabited by excellent, impressed coaches. 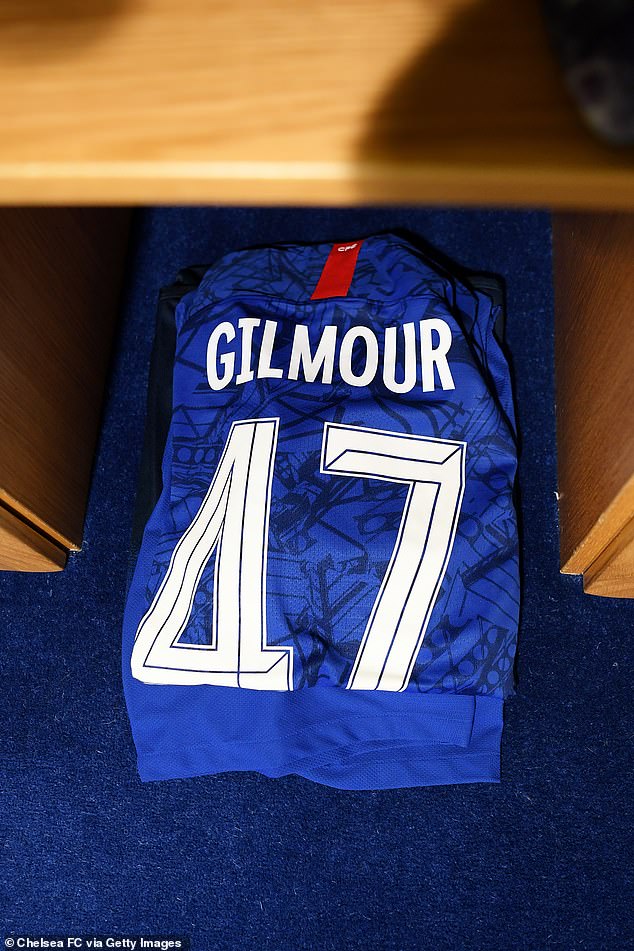 The first testimonial comes from an unusual source. ‘He’s a grafter,’ says Grado, the wrestler and star of Two Doors Down and Scot Squad.

‘But so is his dad. They are a good family. Billy senior comes from the bottom end of Stevenston and was a junior player himself with Ardrossan Winton Rovers. He has to be respected for how he has helped his son make the big decisions.’

Grado’s unlikely role in the story of a prodigy comes from sharing a hometown with Billy senior but also because he persuaded the Gilmours, father and son, to appear on his Football Daft podcast in the summer.

The ease with which Billy junior accepted an 18th birthday present of a bottle of Buckfast and a couple of ‘dubious’ items is indicative of a personality that remains open to the rigours of Scottish humour while retaining the ability to be unsettled by the unexpected.

‘I was wincing before he came on,’ says Grado. ‘His dad is a great mate of my brother’s and I didn’t want him or his son to be embarrassed or nervous. But the way Billy junior handled himself blew my mind. His composure and openness was astounding.’ 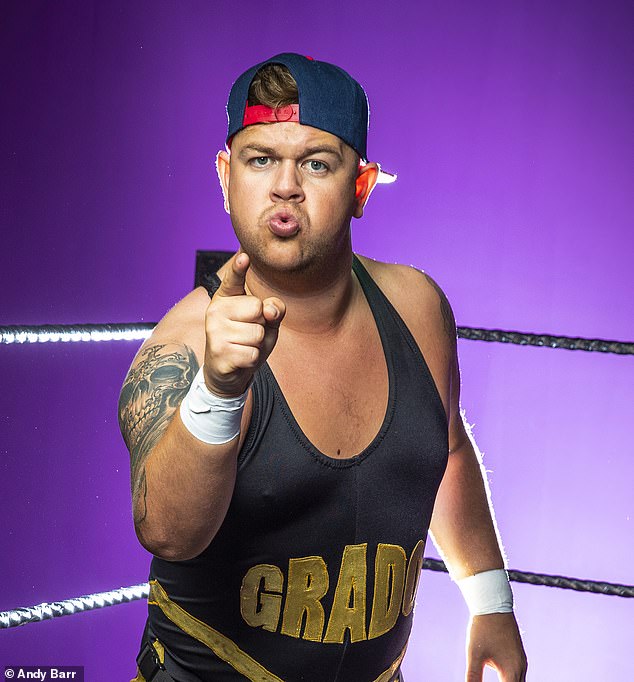 Grado, the wrestler and star of Two Doors Down and Scot Squad, has seen Gilmour up close

The bare bones of Gilmour’s career were exposed: the first steps at the mini-kickers at the age of four when people were already saying he was a talent, his graduation to Tass Thistle, where he was coached by his dad, and his decision at eight to play for Rangers when he was also training at Celtic. His father, a Hoops fan, has said it was a family decision.

He told the podcast that the family, including wife Carrie and younger son Harvey, listed the pros and cons of competing teams. Rangers won the prize because it was easier to travel from Ardrossan to Auchenhowie and, crucially, because Billy senior appreciated the way the Ibrox side’s under-age teams played through the thirds of the pitch.

The move to Chelsea was more difficult. But, again, it chimed with the player’s philosophy. He wanted to play in the Premier League, he wanted to compete against the best in training. It was inevitable he would go. But not before an education in Scotland. 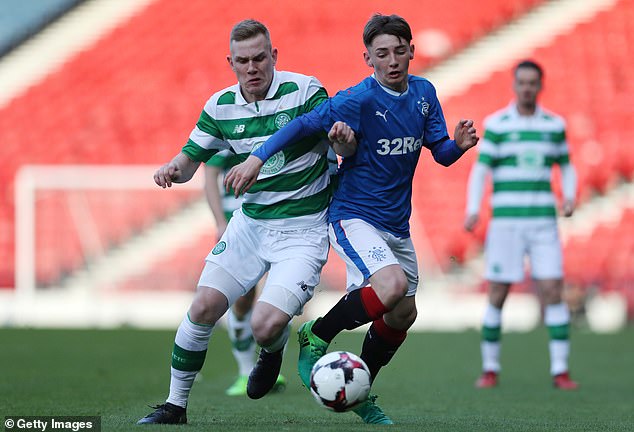 The phone pings a text alert. ‘The message is always the same,’ says James Grady, who with Andy Goldie, coached Gilmour at the performance school at Grange Academy, Kilmarnock. ‘It says: ‘Can I come in to train?”

Grady, who played for Dundee, Ayr United and Partick Thistle in a fine career, adds: ‘There is one word that makes that text. Can. He doesn’t say he is coming in to the school. He is not presuming anything. He asks. He always sends it when he is up. He comes along and trains and will speak to the boys. His message is straightforward. He says: ‘I enjoy hard work. I signed for Chelsea now and I have to try to become the best player in the world’. He shows that in what he does.

‘I have played with a lot of very, very good players and you see in training how they got to that level. Take Derek McInnes. I played with him on the way up in Paisley and he always wanted to play in the Premier League. I thought he was good player and then I trained with him. Derek was the best trainer every single day. Billy is like that. He places so many demands on himself. If he thinks someone is training harder than him, he goes again.’ 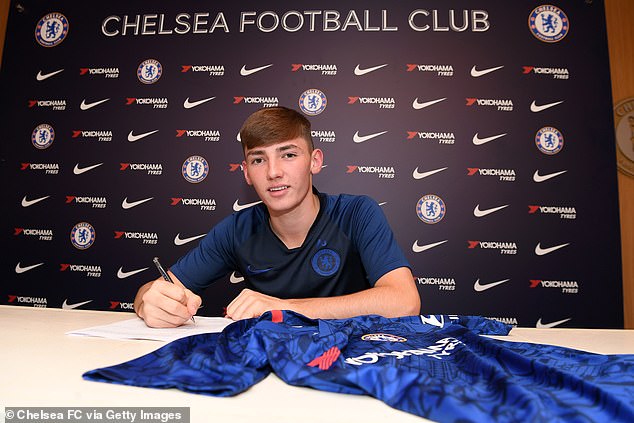 Grady first set eyes on Gilmour in S3 but says: ‘There was already a lot of chat about him because he just stood out.’ He enthuses about Gilmour’s qualities. ‘He recognised very early the three-yard pass is sometimes the right pass. He knew he didn’t have to over-complicate things. That is football intelligence, problem solving.’ Gilmour has always been a slight figure but that should never be mistaken for weakness.

‘If you are built like Billy you have to cope with the physicality without getting into a physical battle and you do that by using your brain, moving the ball, recognising when to take it or pass it. Billy uses his head, he always has,’ says Grady.

Gilmour also has that controlled aggression necessary to survive. ‘He has a tenacious side to him. Just other week against Manchester United, he left one on Harry Maguire just because he could.’ Gilmour, too, played at under-age level against Leicester City where Andy King, the Welsh international, was returning from injury.

‘I gave him a nudge,’ Gilmour confessed mischievously to Grado on the podcast.

‘He has no fear,’ confirms Grady. ‘He was like that at Grange and he is like that now. I watched him the other week making demands of Kovacic and Jorginho.’ The mixture of humility off the pitch and tungsten-tough confidence on it intrigues Grady.

‘It certainly has to do with how he was brought up. His parents are good people. But if I could distil what he has then I would bottle it and pass it out to every youngster I coach.’

Grady would only speak of the player under one condition. ‘There is a danger that people think you are looking for a pat on the back or coming out as the great ‘I am’. I talk about Billy because he is already an example. We as coaches play a tiny part. It is down to Billy.

‘He is now at the stage when Frank Lampard, one of England’s greatest ever midfielders, trusts him. But when I think of Billy I always come up with the image of this wee guy from the Three Toons who told himself: ‘I want to be a footballer. I need to be a footballer’.’ The Rangers training centre seems in total darkness. But Craig Mulholland notices a light in a corner as he prepares to head home after a long day.

‘There was Graeme Murty with Billy Gilmour, both hunched over a laptop watching clips,’ says the head of academy at Rangers.

‘Billy was an outlier in the sense that he always volunteered for extra sessions. Steven Gerrard says great players have to be obsessed. Well, Billy is obsessed in a good way. I first came across him when he was about eight and he had that attitude even then.’ 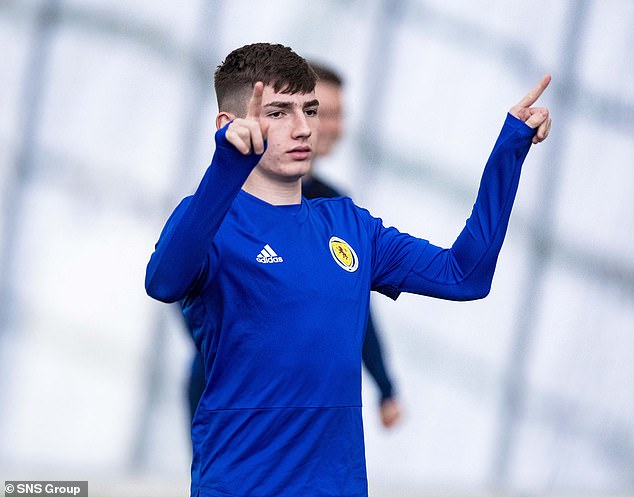 Mulholland adds: ‘His attributes can be briefly summarised as football intelligence. He sees a pass. He moves it quickly.’ His progress was similarly swift, featuring in an Under-20 match at only 15.

‘It was a big decision to play him,’ says Mulholland.

‘You have to decide if the environment is safe, if you are doing the best for the player. It was a match against Dundee when James McPake was making a comeback from injury so there were good, experienced players in the opposition. But Billy’s development was such that we felt he needed to step up a stage and see how it went. It went very well.’

And so did Billy, heading to Chelsea at just 16. ‘There are no hard feelings about that,’ says Mulholland.

‘We have boys who have come the other way. It is important that he had his path. Every young player has his own pathway. We all wish him well.’

The Gilmour trademark of playing beyond his age group has stretched easily into the international arena. Scot Gemmill, manager of the Scotland Under-21 team, had a similar decision to Mulholland ahead of the Toulon tournament in 2018.

‘We were playing against some teams who had Under-23 players,’ says Gemmill of his Under-21 squad. ‘We have a duty of care towards every player but we came to the decision to play him based on his past experiences. He rewarded us with mature displays.’ 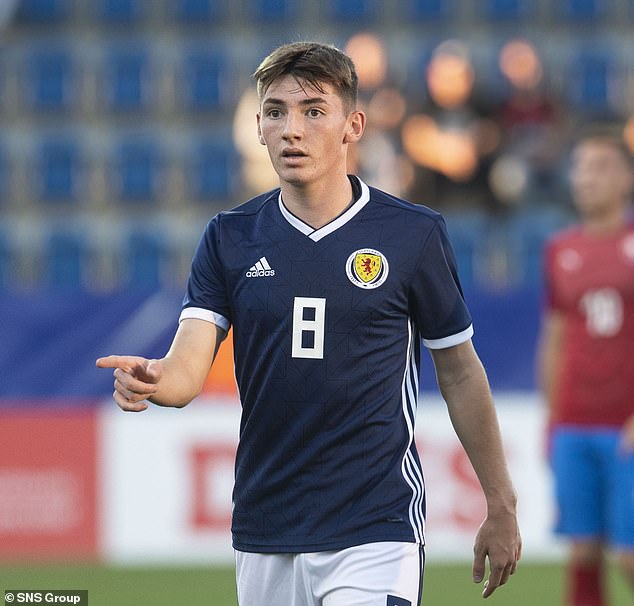 Gilmour was named as Revelation of the Tournament as Scotland reached the semi-finals. Gemmill was pleased but not surprised by his performances. ‘I suppose I first came across him when he about 12,’ he said. ‘You hear coaches and staff talking about him. Word quickly spreads that there is a top-level player coming through,’ he says.

‘The technical level stood out really early. In my opinion there is a window to develop that and past a certain age – and it’s not an exact science – you will find it difficult to improve it significantly. So if you see a player with high technical levels you are immediately excited and thinking good things.’ Gilmour has played for Scotland through the age groups, with an elevation to Steve Clarke’s squad being advocated by many in the game.

For the moment, though, he is in Gemmill’s squad and is set to feature in the Under-21 match against Greece at Tynecastle on Friday. ‘He reacts very well with fellow players and with the staff,’ says the coach.

‘He is very teachable and has a willingness to learn. But he has really good emotional intelligence as well as game intelligence. The way he interacts with his team-mates and staff is reflected in his level of training.’

Gemmill is highly aware of Gilmour’s increasing participation in Chelsea’s first team. The boy from Ardrossan will head north fresh after coming on for Lampard’s side in the 2-0 victory over Crystal Palace, slotting in alongside Willian, Kovacic and N’Golo Kante.

His story will take another step forward in Edinburgh. He is a lad who has set his sights on the heights but never loses his focus on the present. But, if he glances over his shoulder, he might rest his eyes on another coming talent from Ardrossan. Harvey Gilmour, his 13-year-old brother, is at both Grange High performance school and Kilmarnock.

‘He’s a player too,’ says an experienced coach. And he is one who does not have to look far for example or inspiration.