The mango with a waiting list of more than 1,000

A grocer has revealed how an exclusive Indian mango has become the most wanted fruit on the planet – with a waiting list of more than 1,000 people across the UK.

Recognised for its unique taste, aroma and superior quality, the Alphonso mango is often snapped up by the gourmet restaurant trade, with chefs including Raymond Blanc and Jason Atherton singing their praises.

Cultivated from Western India, this juicy, sweet fruit has become a phenomenon in the UK – but it is only available for three months in the UK.

With the short season running between March and July, experts are now predicting more 500,000 mangoes could be sold in the next 12 weeks.

Jyoti Patel, Founder and CEO of Red Rickshaw and FeastBox explained: ‘The Alphonso mangoes in particular go through an incredible journey from the fields all the way onto the plates of diners in UK homes, and the best Michelin star restaurants.’

Recognised for its unique taste, aroma and superior quality, the Alphonso mango is often snapped up by the gourmet restaurant trade, with chefs including Raymond Blanc and Jason Atherton singing their praises

Named after Afonso de Albuquerque, the Portuguese conqueror of Goa, Alphonso mangoes origins were born out of a happy accident.

Afonso’s fleet were carrying with them common Brazilian mangoes. These seeds were planted in India and bore fruit, and due to the different acidity and minerals available in the soil, created a hybrid mango variety – the Alphonso.

But unlike supermarket varieties, typically picked and shipped before they are fully ripe for cost reasons, the Alphonso must be harvested when ready to eat.

That means they have a short season, and since ripe fruits are easily damaged, they’re more difficult and expensive to transport. 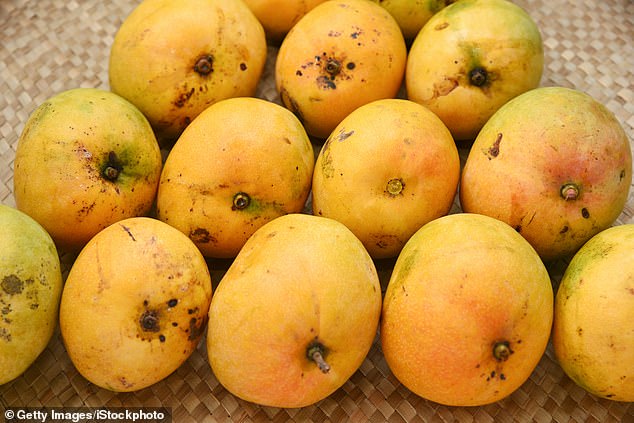 Unlike the red-green British supermarket mango you’ve likely come across, Alphonso’s are devoid of any fibrous texture and glide beautifully away from their skins (pictured)

Jyoti said that the mango season moves with the weather in India and can only grow within a short period of a few months every year.

Because the fruit needs hot and dry weather to ripen, the season starts around March or April in the South West, and June or July in the North East as the rain season moves up the continent from Kerala towards New Delhi and Kolkata.

Farmers now will plan their crop months in advance of the sowing season using knowledge that has been passed down through generations.

Importers will work with these farmers, either within a co-operative or individually if they have enough volume, to secure the volume of the yield and agree pricing in advance of the season.

Jyoti explained how timing to harvest the fruit is carefully organised with the farmers in the country.

He explained: ‘We look to choose the best farmers to work with who we know are able to provide us with the very best product.’ 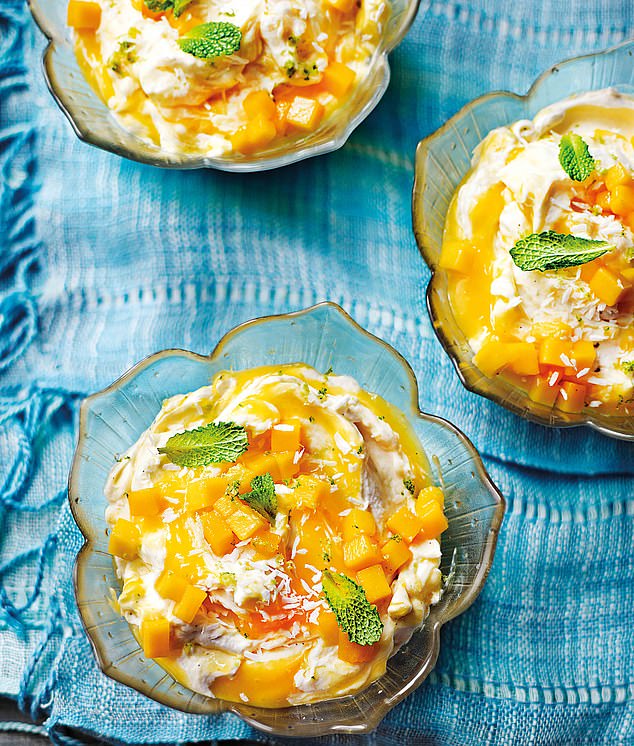 The Alphonso Mango can be used to create sorbet, ice cream, soufflé, mousse, and puree amongst other culinary delights

After the farmer has confirmed the mango is ready to be picked and of the highest quality, it is transported as quickly as possible to the market.

Due to its short shelf life, the fruit travels by airfreight because it would unfortunately not survive a journey by sea.

He explained: ‘The majority of the Alphonso mangoes arrive in the UK at Heathrow Airport where they are customs cleared before being transferred for their onward journey to the Red Rickshaw warehouse.’

A network of delivery drivers then take charge of organising orders from restaurants across the UK, and deliver the mangoes directly to the kitchen doors.

In India, mangoes, such as the Alphonso, which is far sweeter than a typical supermarket mango, are referred to as the ‘fruit of the gods’.

Alphonso’s are devoid of any fibrous texture and glide beautifully away from their skins, leaving you with a succulently, sweet and juicy explosion of flavour in your mouth.

The Alphonso mango has been popular in India for a long time, with many Indians eating little more than the fruit for breakfast, lunch and dinner during its short season.

It has even been known for people to celebrate with ‘mango parties,’ using Alphonso in dishes such as pakoras, curries, mango leather, drinks like lassi and falooda, sweetmeats like barfi and desserts such as shrikhand.

The king of fruits has captured in the imagination of chefs in the past including Richard Corrigan, Yotam Ottolenghi and Peter Gordon, and has been featured on the dessert and cocktail menus of UK restaurants.

Poets have extolled their virtues and mango festivals are held to celebrate their arrival each year.

They are projecting sales to grow by over 80 per cent this year.

From July, at the end of the Alphonso season, Raymond advised looking out for super sweet Langra, Sindhiri, and Chaunsa Mangoes.