The menopause duvet that can stop the bedroom wars boiling over

My husband is curled like a little caterpillar inside the fat rolls of our feather duvet. ‘I’m so cold,’ he gasps. ‘Aren’t you freezing?’ The sweat is slick at the back of my neck. I feel like a steamed dumpling. ‘It’s suffocating,’ I growl, kicking off the cover in a show of petulance. ‘I can barely breathe I’m so hot.’

In midlife, disagreeing about the bedroom temperature is part of the night-time routine. Three out of every four menopausal women struggle with hot flushes and night sweats.

The symptoms are caused by fluctuating oestrogen levels, thought to impact on another hormone called noradrenaline which helps to regulate body temperature, says GP and menopause specialist Dr Louise Newson in her new book Menopause — All You Need To Know In One Concise Manual (£10, Haynes).

In midlife, disagreeing about the bedroom temperature is part of the night-time routine. Three out of every four menopausal women struggle with hot flushes and night sweats (pictured: Anna Maxted and her husband Phil)

‘They sometimes can be triggered by alcohol, spicy foods or hot drinks, but often they just happen, and it’s due to levels of oestrogen being low in the body.’ Seek medical advice if symptoms persist, says Dr Newson, but switching to a split-tog duvet is one way to menopause-proof your bedroom.

Hallelujah then for the new ‘hot¬’ duvet from Nanu, billed as ideal ‘for couples where one individual is going through menopause’.

‘A lower warmth rating can be selected for one half of the duvet to alleviate hot flushes and night sweat discomfort,’ the blurb continues, promising a ‘revolutionary’ product hampered neither by zips nor bulky joins.

It is, in other words, one king-size duvet, with warm and cool halves separated by a single line of neat stitching. Where the hot & not duvet differs from other split-tog options is that you can custom-build it.

To order my his-and-hers personalised duvet, I click on the Nanu website, and survey my ‘warmth choices’. There is mild disappointment when I realise you can only set the warmth of your half to one level above or below your partner’s half. 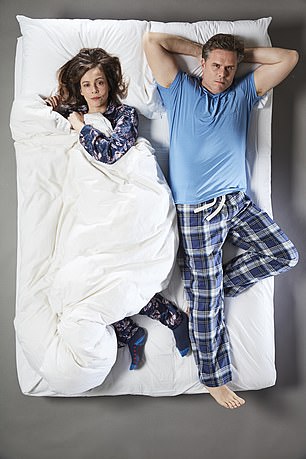 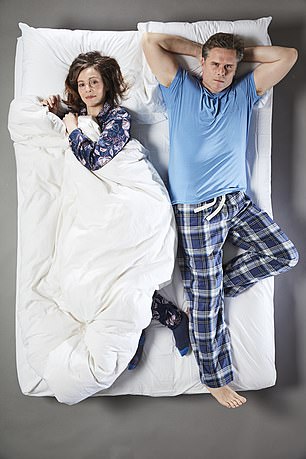 Hallelujah then for the new ‘hot¬’ duvet from Nanu, billed as ideal ‘for couples where one individual is going through menopause’. It is, in other words, one king-size duvet, with warm and cool halves separated by a single line of neat stitching. Where the hot & not duvet differs from other split-tog options is that you can custom-build it.

Still, I look forward to increased marital compatibility under our king-size dual-warmth cover. Sharing a bed is a symbol of togetherness. In theory.

In practice, if hormonal shifts have caused your thermostat to go haywire, it’s a nightmare. Most nights I wake sweltering, while, my husband often isn’t warm enough.

Other ways to keep your cool… 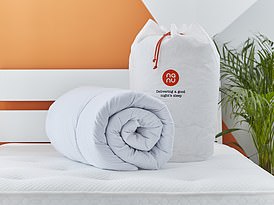 Each of us having our own duvet has worked as a practical solution, but it’s hardly romantic. According to Nanu’s survey, a quarter of British couples regularly argue about their duvet. Only a quarter?

And it’s not just a passion killer. ‘We know from lots of studies that women who have night sweats and hot flushes have an increased risk of heart disease and osteoporosis so it’s important you don’t just try to make the best of it,’ says Dr Newson, who says she saw one patient who suffered hot flushes every half hour.

When the menopause duvet arrives, I’m impressed with how eco-friendly it also is. It has a hollow fibre filling made from recycled plastic bottles (softer than it sounds!).

I wrestle it into a cover, and at 11pm haul it upstairs for its debut. My husband is already huddled under our existing bedding. When I insist on replacing it with our ‘hot¬’ duvet, he’s disgruntled.

‘Has it got any feathers in it?’ he asks, as I carefully arrange it so he’s under the half helpfully labelled ‘Warmer’ and I’m ‘Cooler’.

He’s not happy. ‘It feels thin and cheap,’ he says sulkily. ‘How much was it?’ Sixty-five pounds, I say. ‘Humph,’ he replies, kicking around under it. ‘You’re not going to like it.’ He adds: ‘It’s cold. I’ll need to wear long trousers sleeping under this.’

I ignore him and hop into bed. It does feel very thin and light compared to the weighty puffy feather duvet we’re used to. But after five minutes, I am neither too hot nor too cold. I’m in the Goldilocks zone.

After his many protestations, I’m expecting him to jump up and dramatically don his winter pyjamas or huffily place the feather duvet on top of this one. But there’s quiet. He’s asleep.

I have time to register that my temperature — usually prone to fierce and abrupt fluctuation — feels stable. Then I drift off, minus the usual sweating.

I do not wake to furiously shed layers or jam open the window. In fact I am woken only once, briefly in the dead of night, when the cat leaps onto the hot side.

The next morning, to my surprise, I realise I have slept soundly and comfortably all night. My temperature was exceptionally well-regulated.

But this is a joint venture. I ask my husband how he slept. ‘Fine. Very consistent temperature actually. There are no gaps, no clumps of heat and pockets of cold. It performs better than an expensive feather duvet in that sense. It’s light, yet I’m warmer under this. The feather one has bare patches.’ He adds: ‘I’ll keep it on. I like it.’