The first thing I had to do when this week’s test car arrived was ignore the colour, a particularly bright pillar-box red. Mercedes calls it Jupiter red – whatever, it still didn’t look at all right. Fine perhaps on a VW, Ford, Kia or Honda but not on a Merc, which was such a shame. This car looks so much classier in one of Mercedes’ subtler shades – mountain grey, for example, or iridium silver, or even polar white, pictured below. In the hideous tone I was sent, it looked more like a sunburnt pig than an aspirational wannabe hot hatch created in an attempt to hook the next generation of luxury-car buyers. This is what’s known as an AMG Line – ie, not really an AMG, but something that’s supposed to look and feel a bit like an AMG. I have never seen a bright-red AMG in my life. Anyway, moving on…

Compared to last week’s all-our Christmases-have-come-at-once-Bentley, I thought the A 200 was going to be a run-of-the-mill, practical and prosaic affair. Well, not so. Not so at all – at least to begin with. 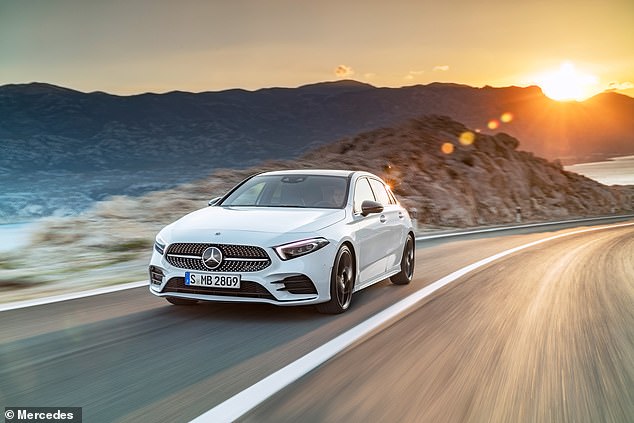 This week’s verdict: a cut above the rest when it comes to digital domination, a fabulously subtle new form with a very nice interior but a bit plain Jane to drive

Mercedes has treated its entry-level baby Merc to a full-on cosmetic makeover, the result of which is a much prettier car than its predecessor. A fact that became patently obvious the moment I serendipitously pulled up to a 2016 200 Series (bizarrely in that same blooming red – weird). Although the overall silhouettes of the two cars are similar, the main features of the new model benefit from a major rethink.

The front and rear light clusters, for example, have come in for some severe streamlining, along with a host of new scoops, air intakes and racy fins. Whether or not any of the above actually serve any real purpose, along with the fake twin exhausts and suspiciously innocuous-looking rear diffuser, is highly unlikely but no matter, the point of the whole exercise is to make the car look heaps more sporty and attractive. And it does (except not in red). Which is all well and good and fabulous and all that, but not half as well and good and fabulous as the amazing interior.

From the Bang & Olufsen circa-1990-style fascia, the whole of the front of the cabin this time around is on an entirely different level to any other make of vehicle in this class. More Japanese than German (someone at Mercedes has been reading up on their Zen minimalism) everything is sharp, smooth, crystal clear and clutter-free. From the central console upwards, this is the future, the epitome of understatement combined with the absolute zenith of touchscreen/touchpad technology.

For £2,395 on top of the basic OTR price of £28,700, the Premium package option includes the breathtaking, S Class-inspired double whammy of 10.25in media display screen along with the 10.25in instrument cluster screen, both controlled via no fewer than four separate remote systems. Also included are heated front seats, Active Parking Assist with Parktronic (!), 64-colour option ambient lighting (!!), and best of all, the Siri-style ‘Hey Mercedes’ voice activation system (!!!). Your every wish is its command – all one has to do is purr orders in its direction. Especially fun when it comes to the amazing augmented-reality satnav, which superimposes traditional graphics over live pictures taken from a front-mounted on-board camera. It’s both spellbinding and super-accurate, a real-world view of where you’re going, as you’re going there.

As for comfort and the more traditional requirements of a modern car, things like finishes and bag space, everything is very German – ie, ‘most satisfactory’. Boot space is about average but the good news is, all the rear seats fold down separately and head room and leg room all round is much improved.

The seats and armrests are Alcantara-tastic, which I love, there are attractive flashes of aluminium panels here and there to brighten things up a bit and turbine-style air vents, which seem to be Mercedes’ new fleet signature, appear in this model for the first time. 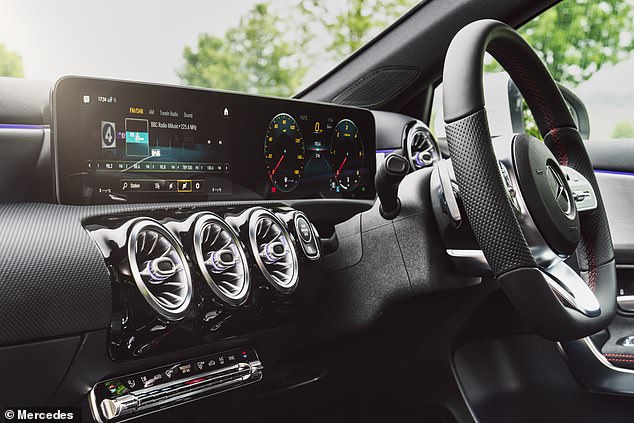 As for comfort and the more traditional requirements of a modern car, things like finishes and bag space, everything is very German – ie, ‘most satisfactory’

To drive, my 1.3-litre turbocharged petrol version was… OK. Or probably a bit more than OK, it’s just that I was so blown away with everything that was going on inside I wanted more from the car out on the open road. The truth is that at no point during my time behind the new S class-style steering wheel was I engaged to the extent I began to care about anything that was happening. This, remember, from a car that is in the same price/mood/excitement bracket as a Golf GTi and Honda Civic Type R. Not great, but for what it’s worth, here are the main thoughts that jumped out at me: the car corners better than it does anything else (although that’s not saying much), the engine sounds a bit laboured (alas never sporty or throaty), the steering is a bit too light, the suspension too firm. Economy-wise, however, all is good – well over 40mpg in real life, against an elusive factory best of 53.3mpg. Not bad in the grand scheme of things.

This week’s verdict then: a cut above the rest when it comes to digital domination, a fabulously subtle new form with a very nice interior but a bit plain Jane to drive.

For those who love their tech, along with a Merc badge to help with any cracks in their material self-esteem, this car is probably a five out of five. For those who lean more towards the traditional allure of a hot hatch, I think we’re more likely looking at a solid four out of five. In which case, let’s deal on a conciliatory four and a half.

Just as I was about to step out of this car for the last time, a Mercedes C Class passed me. Guess what colour – Jupiter bloomin’ red. Is there something someone’s not telling me?