The mighty Bosh! The YouTube stars revolutionising our eating habits

This is the thoroughly modern tale of how a couple of hipsters from Sheffield tapped into the culinary zeitgeist and conquered the (virtual) world.

First they were best mates. Then flatmates. Next they were work mates. One of them turned vegan. So did the other.

Then they thought it would be fun to launch their own online cookery channel and Bosh!, a global phenomenon, was born.

That was in June 2016. Now, Henry Firth and Ian Theasby, both 33, are vegan superstars, whose recipe demonstrations reach 26 million people a month worldwide.

Their brand name is Bosh! because it ‘sounds fast and fun and the very opposite of fussy’ and, inevitably, they’ve been dubbed the Bosh! boys.

Also rather inevitably, they’ve been compared to Ant and Dec because their success lies in their friendship as much as food, but they don’t see it that way: this isn’t showbusiness, these lads are on a mission to change the way we all eat.

‘We’d like to be thought of as the slightly less hairy Hairy Bikers,’ says Ian. ‘But really we’re just doing our own thing and banging the drum for delicious, plant-based food. This is all so exciting and the launch of our book is a major milestone for us.’

And not just for them, for their fans, too; their hotly anticipated Bosh! cookbook soared to the top of the Amazon charts on pre-orders alone.

Oh, and if you’re still not convinced that ‘vegan superstar’ isn’t a contradiction in terms, you probably aren’t aware that Beyoncé is a vegan. So are Brad Pitt and Liam Hemsworth.

‘Our food isn’t just aimed at vegans,’ emphasises Henry. ‘It’s for everyone. There’s a huge groundswell of interest in going meat-free; people want to try new flavours, new dishes that don’t include any animal products. We’re not out to convert anyone and we are certainly not in the least bit militant. We just hope we can convince – not by lecturing anyone but by sharing our badass, plant-based recipes.’

If you’ve never heard veganism described as ‘badass’ it’s time to tune in to bosh.tv. The boys’ first ever recipe, for healthy sushi cake, has received more than three million views on Facebook. 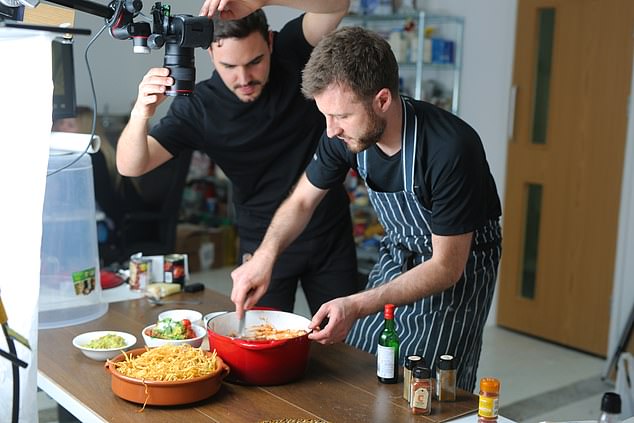 Henry films as Ian whips up another vegan dish for their Bosh! TV channel.

Their second, mezze cake, notched up five million, but the super-viral record-breaker was their watermelon Jägerbomb punch, which was viewed 17 million times in the first week.

They’ve made ratatouille with Take That’s Gary Barlow and they’re hoping the newly vegan Will.i.am might drop by their home in East London, where they film their videos. It’s a far cry from mung beans, hemp sandals and virtue signalling.

Tall – both six footers – dark and handsome, the Bosh! boys always dress in black as an extension of their cool brand.

Henry, wearing a hoodie bearing the legend ‘Work Harder’, is smiley and garrulous while Ian is more reserved. Both are funny, warm and radiate a relaxed assurance.

They are, in short, the antithesis of the joylessly earnest vegans of old. Their generation consider it cool to eat Quorn, drink soya lattes and care about global warming.

According to the National Diet and Nutrition Survey, around two per cent of the British population – 1.2 million – are vegetarian. Just over half a million are vegans, a 360 per cent increase over the past decade. 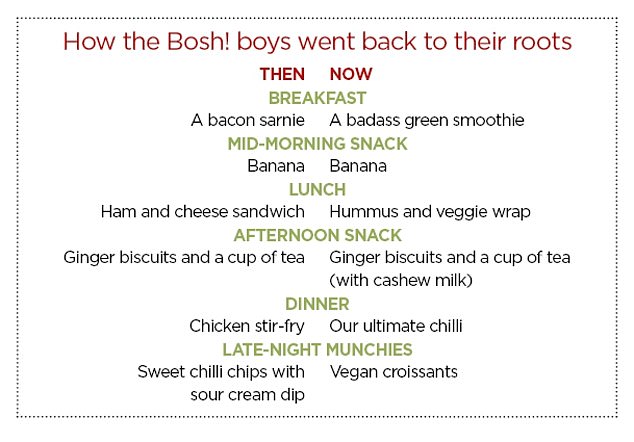 Many more of us are changing our eating habits: a survey carried out by Forum for the Future has revealed that one in three people now identify as flexitarian, or semi-vegetarian.

Last year more than a quarter of us deliberately reduced our meat intake for reasons of health, animal welfare and environmentalism.

‘We make good, simple food that isn’t bland or boring or expensive,’ says Ian. ‘It’s easy to cook and get fired up about, not because it’s worthy but because it tastes amazing. That’s how to get people hooked on veganism.’

Henry and Ian first met at secondary school. ‘We weren’t close friends, we just felt a connection,’ explains Henry. No one in his family is a vegan, but they were all so impressed when he cooked them a vegan Christmas dinner three years ago that they’ve asked him to do it every year since.

Our message is positive: try this pasta burger; it’s delicious, good for you and good for the planet

He has a vegan girlfriend, Emily-Jane – a make-up artist who sells vegan-friendly make-up kit bags. ‘Being vegan wasn’t a criterion for the relationship,’ Henry grins. ‘It just happened that way and it makes life easier, for sure.’

Ian, who is ‘happily single’, concurs. Any future girlfriend could be a meat eater – it wouldn’t be a problem. ‘But I would be cooking vegan food for her and she would be so well fed that she might be persuaded.’

There was no intimation that either Ian or Henry would end up as full-time foodies. After leaving school Ian worked in fashion retail, while part-time DJ Henry coded websites and set up his own tech company in 2012, where Ian, by then his flatmate, became his first employee and marketing manager.

Then, three years ago, Ian decided to do Dry January and ditch alcohol for a month. ‘I found it easy, so I upped the ante by doing Veganuary and it really suited me,’ he says.

‘I slept better, I felt better and woke up with so much more energy. As the weeks went by, my hair grew thicker and I lost weight; it was a win-win outcome. It was the best thing I’ve ever done.’

When Ian started cooking vegan meals at home, Henry was convinced he ought to give it a go. He felt that going vegan rather than vegetarian showed a greater commitment to animal welfare. 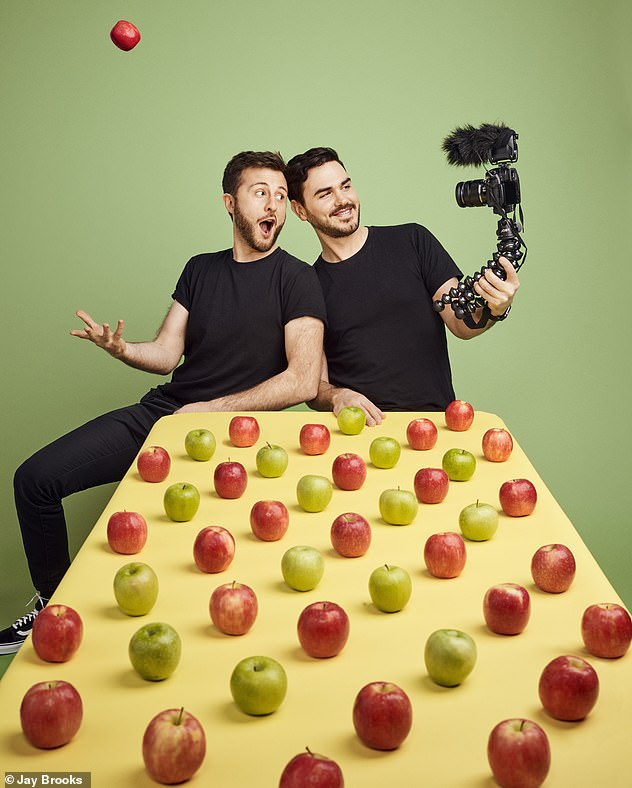 Ian and Henry are naturals in front of the camera

‘I’ve always been interested in environmental issues,’ says Henry. ‘And after seeing the documentary Cowspiracy, which examines the devastating impact of animal agriculture on the environment, I felt a personal responsibility to do something.’

At this point Ian hastily interjects that he comes from a farming background – his grandparents were farmers – and that they both respect the different choices people make about what they eat.

‘We realise that meat and dairy agriculture is a big part of the British economy and we aren’t here to condemn it. Most of our friends aren’t vegan and that’s OK. Ours is a positive message: try this pasta burger; it’s delicious, good for you and good for the planet.’

Henry discovered that a vegan diet even cured his long-term hay fever. And as he and Ian started exploring new ingredients, searching in vain for appetising recipes, inspiration struck: why not use their tech background to set up an online channel dedicated to plant-based dishes, cooked with equal helpings of passion and panache? So that’s exactly what they did. Henry sold his business and Bosh! became their focus.

‘From the outset we’ve taken the greatest of care with every recipe,’ says Ian. ‘We decide every morning what we’re going to cook, then we buy the ingredients, practise the recipe and film it. Then we spend four or five hours editing the film. That’s important; quality food deserves high production values. So what looks like a quick video is actually an eight- or nine-hour labour of love.’

It’s a labour that is finally paying off. Until now the Bosh! boys have been ‘bootstrapping’: doing everything on the cheap, relying on savings and scratching a living from freelance tech work.

Their book deal is an important consolidation of their brand; they’d love to take it further with a mainstream cooking show and, frankly, it would be madness not to give them one.

At a time when we are all examining our eating habits, vegan food could do with some primetime exposure and these two are genuine, likable and watchable presenters.

‘We both love food and have a different approach to cooking, which is great because we complement each other,’ says Henry. ‘Ian is methodical and thinks things through with great precision. I’m more about, “How can we make the process quicker and more efficient?” I also visualise what our next step will be as a brand.’

There’s just one point of tension between the duo and even that’s quite mild: Henry has an inability to wash up as he goes along and Ian has a tendency to get exasperated by the mess.

They’re not quite at the stage of finishing each other’s sentences, like a married couple, but time will tell. Henry’s favourite treat is a mushroom roast dinner. Ian loves a spaghetti bolognese with mushroom mince.

The only things they ‘miss’ from the old days are fish and chips (Henry) and Ian’s mum’s chocolate brownies. Needless to say they have painstakingly created vegan versions.

As far as supplements go, the pair take vegan omega-3 and 6 and a multivitamin pill daily to cover any shortfall, particularly B12, which is generally lacking in a plant-based diet.

Otherwise every nutritional need is covered. Moreover, dining out as a vegan is becoming easier all the time. The growing popularity of Veganuary menus underlines the desire to eat well without animal products.

‘Even just a few years ago, if we wanted to eat out the choice in most restaurants was either salad or chips or salad with chips,’ says Henry. ‘Nowadays it’s very different; one marker is the sheer number of alternative milks on the supermarket shelves. It used to be just soya and possibly almond; now there’s oat milk, rice milk, coconut milk, cashew milk and so on. There’s a real hunger for change.’

Kitchen creativity is on the increase; even that holy grail of veganism, a juicy meat-free Beyond Burger that ‘bleeds’ (beetroot juice, since you ask), is due to arrive in the UK any time now.

It’s fair to say there’s been a radical blurring of the boundaries between fast food and fabulous food. ‘We’ve tasted those burgers and they are great,’ confirms Henry. ‘It’s really exciting. There’s so much going on that we intend to publish a new cookbook every year.’

It’s a demanding schedule, but they are certainly not short of energy and drive. ‘Setting up your own business is tough and demanding,’ says Ian. ‘Because we’ve been friends for so long we can rely on each other. We’ve spent the best part of six years together all day, every day so we can handle this crazy routine; we put in around 80 hours a week.’

As far as the next step is concerned, the Bosh! boys are mulling over the idea of providing home-delivered vegan meals using an existing firm such as Deliveroo because sometimes even the most virtuous of vegans can’t be bothered to cook.

‘The first question the subscribers to our channel ask is when there’s going to be a Bosh! restaurant. We did think about it, but a delivery service is more scalable; our food can reach more people in more places that way.’

Another way to expand their empire would be to have their own range of kitchen gadgets (the second most-asked question is about their favourite food processor). I think young people in particular would be inclined to invest in Bosh! kitchen essentials.

The name is cool and the concept is cooler. The Bosh! boys have whetted an appetite for delicious food with a difference. Bon appetit!