‘The mole on my tummy was not cancer, but the spot on my nose was’

For a few months, while applying make-up I’d look to the right of the bridge of my nose and think: ‘That annoying zit is still there.’

Or I’d suddenly be plagued with an intense itch in the corner of my right eye. I’d curse, apply some eye drops, and carry on my day. The new, dark mole on my abdomen, on the other hand, was approached with the same hypochondria as most of my other health ailments.

I never miss a check-up, even ‘embarrassing’ ones, and I’m first in line for a flu shot. Every ache and pain has me calling my GP, convinced that it’s cancer.

I am particularly vigilant with the splattering of freckles and moles on my body, largely because I am a pale Australian. Australia has been dubbed the skin-cancer capital of the world, with two-thirds of the population diagnosed with some form of the disease before they reach 70. Year-long sunshine and the pasty complexions of our colonial European ancestors are to blame for the astronomical rates, as well as pitiful turnouts to skin cancer screenings.

Jo Elvin, the You magazine editor, had a cancerous mole on her nose which needed to be removed

For my parents and plenty of friends back home, removing lesions and skin cancers is as routine as getting a haircut.

I’m also aware I haven’t helped my poor genetic predisposition by spending my teenage years doused in coconut oil, baking my skin to a crisp. I was desperate to have the bronzed body of my friends.

Even if my skin didn’t turn mahogany, anything was better than my natural ghostly white. So when I noticed the raised mole on my stomach expanding ever so slightly, I raced to The Mole Clinic, a private dermatology service in Central London.

The nurse was unconcerned. ‘I’m not worried about it, but keep watching it for any changes,’ she advised. But before I could celebrate being cancer-free, something on my face caught her eye. ‘Has that little bump in the corner of your eye always been there?’ she asked.

She gave me a stern look and said: ‘We need to get that checked out.’

The bump looked nothing like a mole. It was pale pink, half the size of a pea and almost identical to a pimple, although, in hindsight, it was harder, more unyielding than a zit. A forensic check with a microscope confirmed the damage. I had a basal cell carcinoma (BCC), the least risky type of all skin cancers but a skin cancer nonetheless.

BCC is one of two types of common non-melanoma skin cancer – the other being squamous cell carcinoma (SCC). These slow-growing tumours originate in the epidermis, the uppermost of the skin’s three layers, and account for 95 per cent of all skin cancers.

BCCs typically appear as a tiny lump or discoloured patch that persists for a few months. While SCCs appear similar to BCCs, they are scaly, crusty and can bleed.

Melanoma, on the other hand, is more rare and concerning. These tumours originate in pigment cells known as melanocytes and look like moles. Melanoma spreads quickly to other parts of the body.

As BCCs and SCCs usually stay confined to the upper layer of skin, in 90 per cent of cases they are cured with a short operation to chop them out.

But if left untreated, SCC can eventually grow through the skin and spread to elsewhere in the body. Although I knew my BBC wasn’t ‘serious’, I still recoiled in terror at the sound of the ‘C’ word.

Thankfully, I was promptly referred to a plastic surgeon who whipped it out within minutes under local anaesthetic, and stitched me back up in about 15 minutes. 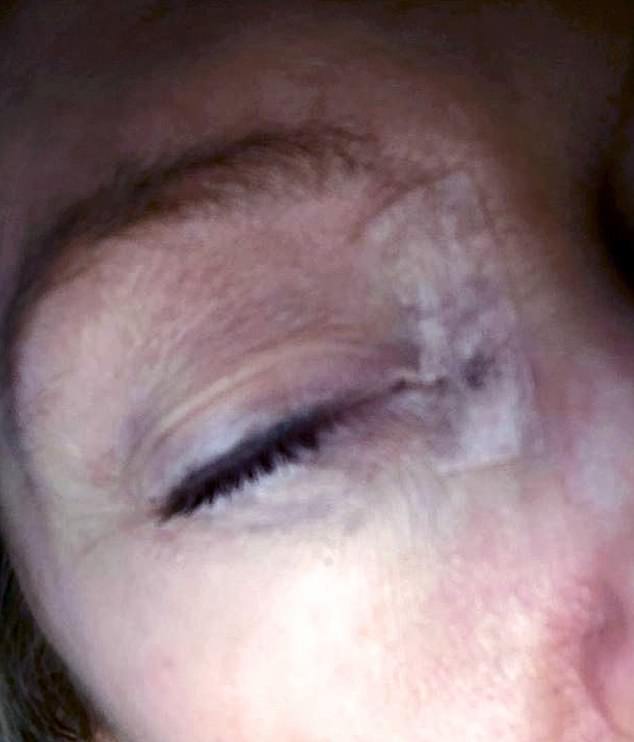 An immediate biopsy confirmed the diagnosis. It felt rather odd that less than an hour after having my cancer removed, I was in a taxi heading home as if nothing had happened. Then the painkillers wore off and I could barely think straight for the throbbing, so I dozed on the couch.

I woke, pain dulled, just in time for an early-evening glass of wine that was heartily recommended by the surgeon.

On Friday I received word that they think they got it all. But as sometimes more is left than is visible to the surgeon’s eye, they’ve recommended I get a bit more cut out just to be sure.

The British false sense of security when it comes to sun damage is now all the more frightening.

When the sun decides to make a fleeting appearance, we recklessly offer up every inch of our skin to its perilous rays.

I had no idea a skin cancer could look so innocuous, despite my hypochondria.

In a bid to prompt others to inspect their lumps and bumps, I posted a picture of my post-surgery, sliced face on social media. More than 3,000 likes later, it’s one of my most popular posts.

And while we berate social media for its damage to our health, this particular post might just save a life.

At least nine in ten cases of non-melanoma skin cancers are cured, usually with an operation to remove the tumour.

Depending on the size of the lump, surgeons may repair the wound using a skin graft, which involves removing a patch of healthy skin from your neck, abdomen or upper thigh and patching it over. This gives a better cosmetic result. Non-surgical options are also available in which light, radiation or freezing treatments are used to burn away the cancerous tissue.

Recent surgical innovations are a saving grace for those with BCCs in hard-to-reach parts of the body.

MOHS micrographic surgery, for instance, chips away at the tumour bit by bit, with medics performing biopsies throughout the procedure.

This ensures that the whole tumour is removed while inflicting minimal damage and scarring.

Melanoma treatment involves surgery, radiotherapy and perhaps chemotherapy or other drug treatments, depending on whether the cancer has spread.