The moment I realised I’d happily die for my stepdaughter

My stepchildren were only three and four when I met them, thankfully after their parents had divorced. I was woefully ignorant of all things to do with bringing them up. But their fierce little faces when their dad introduced them to me set their cards out on the table.

They weren’t to be won over by my suggestion that we feed the ducks in the park. When we got into the car and the radio was playing softly, Louis, the three-year-old, declared he hated loud music (he forgot this as a teen), while later Josie announced that I was mean for turning off the television and, by the way, Mulan was the very best film.

I had been an only child and, after my father’s death when I was nine, it had been just me and my mum. I had relatives, but they lived a long way away, so my teenage and adult years were pretty much child-free. I can’t ever remember holding a baby or taking a toddler’s hand.

Jenny Parrott, 60, reflected on her role as a stepmother to Louis and Josie. Pictured: Jenny and Josie today

Now these children were looking at me with a deep suspicion. And I was terrified, as well as incredibly wary, of them.

Not quite terrified enough, though, to avoid setting up home with their dad. But the sort of scared that means you get everything wrong all the time.

I didn’t do anything the way their mum did, so a black mark there; I didn’t know Louis didn’t eat anything green (another black mark); and, obviously, I couldn’t read them a story in the proper way.

I managed to upset everyone — their mum and dad and the parents of all their friends — by trying too hard at a birthday party for Josie at our house, spending weeks collecting trinkets for pass-theparcel (socks, fun lip glosses, sparkly bracelets, even an electric toothbrush), all hidden in layer after layer of cheery paper. The scathing looks from all concerned stayed with me for a long time.

How couldn’t I understand that pass-the-parcel was layers of newspaper, with a single sweet in each layer? Apparently that particular East Dulwich rule wasn’t in my DNA. But how can you know these things if this is the first children’s party you’ve been to, let alone helped organise?

I didn’t learn. When Josie declared she wanted to bake a cake for her mum while her dad was out, I let her choose a Nigella Lawson recipe with ingredients that cost £42. It was my first attempt at a cake, and very possibly Josie’s too. It was inedible.

Louis was simpler to deal with. He detested me. Whenever his dad wasn’t looking, he would do a impression of the Incredible Hulk, teeth bared in my direction and fists clenched as he trembled with rage. He was adept at pasting his meek choirboy expression back on in the nanosecond it took for his father to turn round. 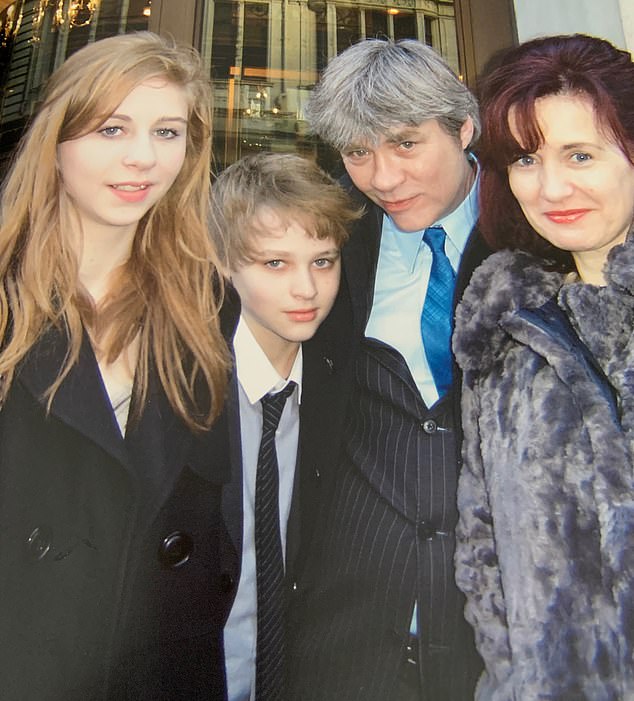 Jenny who met her stepchildren when they were only three and four, said they started to enjoy each other’s company when they became teenagers. Pictured: Jenny and her family

Until Louis was eight, I never dared challenge him. Then, one lunchtime, I cracked, and we yelled at each other from opposite sides of the kitchen table, with me shouting: ‘You will help me clear the table,’ and him yelling: ‘I won’t!’ I can’t remember who won — Louis, probably — but we got on better after that.

As the years passed, slowly the tide turned. And, a few teenage moments aside — the sneaked weekend house party when their dad and I were away, an argument when Louis and I screamed at each other in the street (which I’m sure the neighbours enjoyed), the shenanigans with alcohol during ‘band practice’ in the loft in Year 7 — we all became good friends, probably because I was more lenient than their mum and a softer touch for cash than their dad.

We started to listen to each other, and to enjoy each other’s company. I discovered to my surprise that I really like teenagers (even in large groups) and their continual dramas, and I was happy to sit for hours gossiping with whoever was around.

It was during this period that I learnt that being a stepmum can be a very privileged position. I think children of divorced parents want to be the best version of themselves for each parent, and this means that to some extent they filter what their birth parents are allowed to know. While I’m sure I wasn’t told everything, there were times when I heard things in confidence and I made sure never to breathe a word. 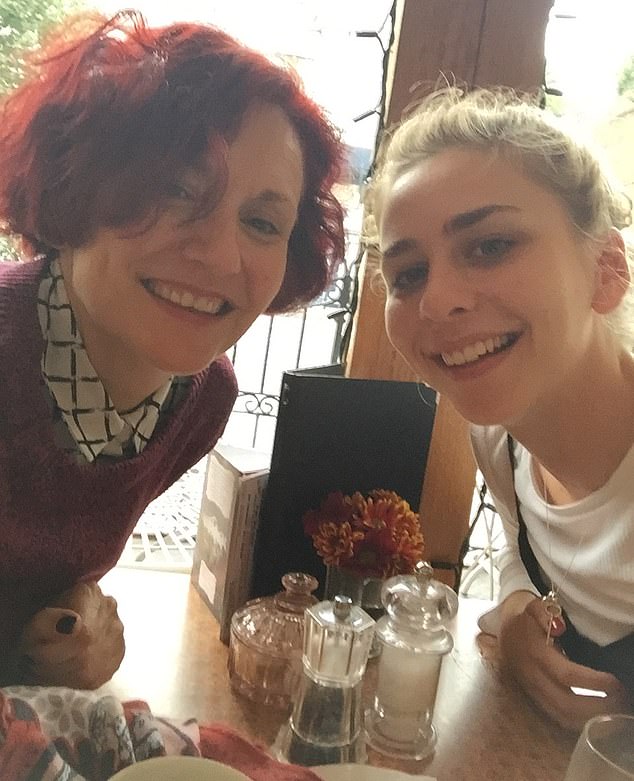 Jenny revealed that she now speaks to Josie nearly every day and has a deep bond with Louis that can’t be broken. Pictured: Jenny and Josie

I knew there might come a time when I could be of use for a far more serious problem, but I wouldn’t be approached if I’d shown already that I couldn’t be trusted.

And I learnt, too, that perhaps being a stepmother is easier than one might think. Leave the adult stuff to their real parents and you learn that kids want to be with people who like them, while stepmums and stepdads want to like their stepkids, not least because it makes life easier.

It’s not a perfect scenario. Few would argue that the full set of one’s original, loving parents (mum and dad, mum and mum or dad and dad) is ideal. But the world isn’t perfect, and for many the blended families of today are supportive and caring alternatives that work surprisingly well.

Looking back, I can see that families are curiously resilient, and I’m just sorry it took me years to realise that. I could have enjoyed it all much more at the time if I’d allowed myself to.

Nobody but me much cared if I got it right or wrong. Today I’m 60 and my stepkids are adults — and what lovely grown-ups they have turned out to be: lively, funny, chatty, kind and compassionate. Josie and I talk nearly every day, and while I don’t speak to Louis as often, it feels, on my side at least, that we have a deep bond that can’t now be broken. 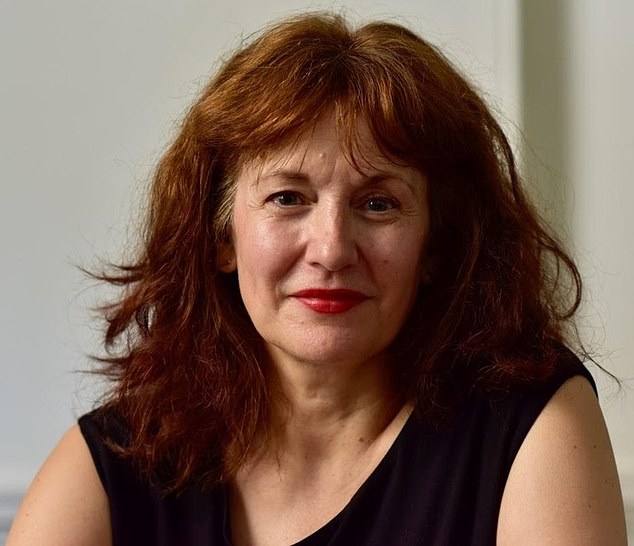 Jenny (pictured) admits being a stepparent is tricky, but it feels like an honour that she probably doesn’t deserve

Every Christmas he gets me the very best present of all the gifts I receive — I don’t know how he does it, but each year he gives me exactly what I need, even if I didn’t realise it.

I used to say I couldn’t take any credit for how these kids turned out — they have two parents who put in the hard graft to guide them securely into adulthood. But the truth is more complicated than that: Josie and Louis changed me, and I think in some small ways I influenced them.

What I feel now is proud that my stepkids and I love and support each other. I think of them as the gift that continues to give.

Being a step-parent is tricky and arouses a complex set of emotions. You are essentially flung right into the middle of the relationship of their actual parents, which isn’t a comfortable place to be.

But when, at junior school, my stepdaughter was being bullied and told me what had been going on, I was overwhelmed with both love for her and a Vesuvius-like desire to protect her. And in that moment, I knew I’d lay down my life for either of my stepkids without a moment’s hesitation.

I don’t think that will ever change, and it feels like an honour I probably don’t deserve.

Adapted from The Best Most Awful Job: Twenty Writers Talk Honestly About Motherhood, edited by Katherine May (£12.99, Elliott & Thompson), which contains an essay by Jenny Parrott.